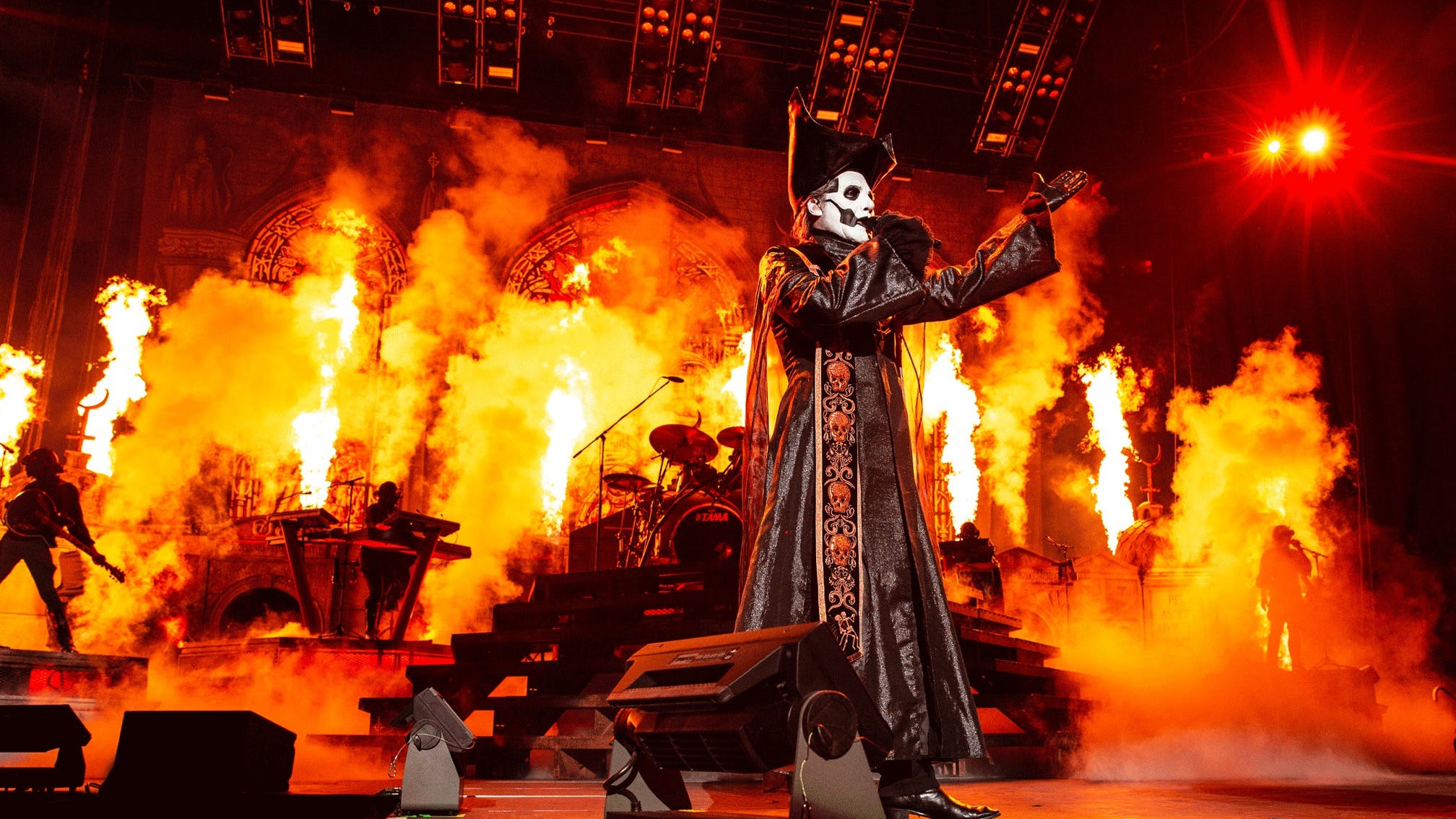 “It’s nice to see you all again! I hope it hasn’t been too shite for you!” proclaims Tobias Forge, as Ghost return to the UK after nearly three years away. Tonight marks the biggest headline show on their biggest-ever run on these shores, and with latest offering Impera hitting Number Two in the UK albums chart, a party atmosphere fills the arena in anticipation for probably the most brilliantly eccentric metal band in the world right now.

First up Satanic doo-wop outfit Twin Temple set a mood with a set of dark cool that touches on both Amy Winehouse and King Crimson. The spell they cast creates a fittingly diabolic vibe of evil cool, broken only when the venue's blinding strip lights come on again as they leave the stage.

Uncle Acid And The Deadbeats last played venues this size whilst out on the road with Black Sabbath back in 2014, and their brand of psychedelic rock’n’roll remains mind-fryingly deadly. Their set tests every single sound barrier inside The O2, with a barrage of burly riffs creating a huge wall of noise that tests the very fibres of the eardrums.

Ghost rip into the grandiose Impera opener Kaisirion, with the Nameless Ghouls ensuring that ambitious riff is heard well beyond the walls of the dome. Rats quickly follows with a fan lobbing a plastic rodent onto the stage as Papa Emeritus IV picks it up and clenches it with his fist during the perfectly timed chime of ‘RATS.’

This is more than just a mere metal show now. Ghost have created a full-scale, almost operatic production here that allows their brand of pop-friendly metal to leave their congregation in pure ecstasy. GRAMMY-winning track Cirice hits like a 10-ton hammer as Tobias reappears donning bat wings, before twanging piano keys, almost reminiscent of your favourite ABBA track, sees in Spillways for its London debut – a song made for dancing, not moshing.

As much as Tobias is front and centre, the abundance of Nameless Ghouls – now donning Tusken Raider-meets-steampunk helmets – spend the night showing off their skills. Whether it be through the spacey heights of Miasma, which includes that outrageous saxophone solo, to the over-the-top keytar solo from one of their heaviest tracks Mummy Dust, everything the Ghouls do all helps set the precedent that they’ve come to entertain.

It ends with an outpouring of emotion from Tobias. “Thank you from the bottom of our hearts – those who are still afraid of going out but have made it tonight, thank you.” Then he quickly changes tack and tells everyone to go home and “fuck themselves” or “fuck someone else,” as Ghost seal proceedings with a flurry of some of metals most flamboyant party anthems. A cover of Metallica’s Enter Sandman starts the final hurrah, with Dance Macabre encouraging everyone to use their “taint” one last time to create a spooky disco, before Square Hammer throws down the gauntlet with raining fire.

Costume changes, confetti canons, disco lights and shots of fire, tonight’s show encapsulated everything that Ghost are about: a band pushing the boundaries of what a metal show should be by adding in scrupulous amounts of fun. Their trajectory from here on out really knows no bounds.