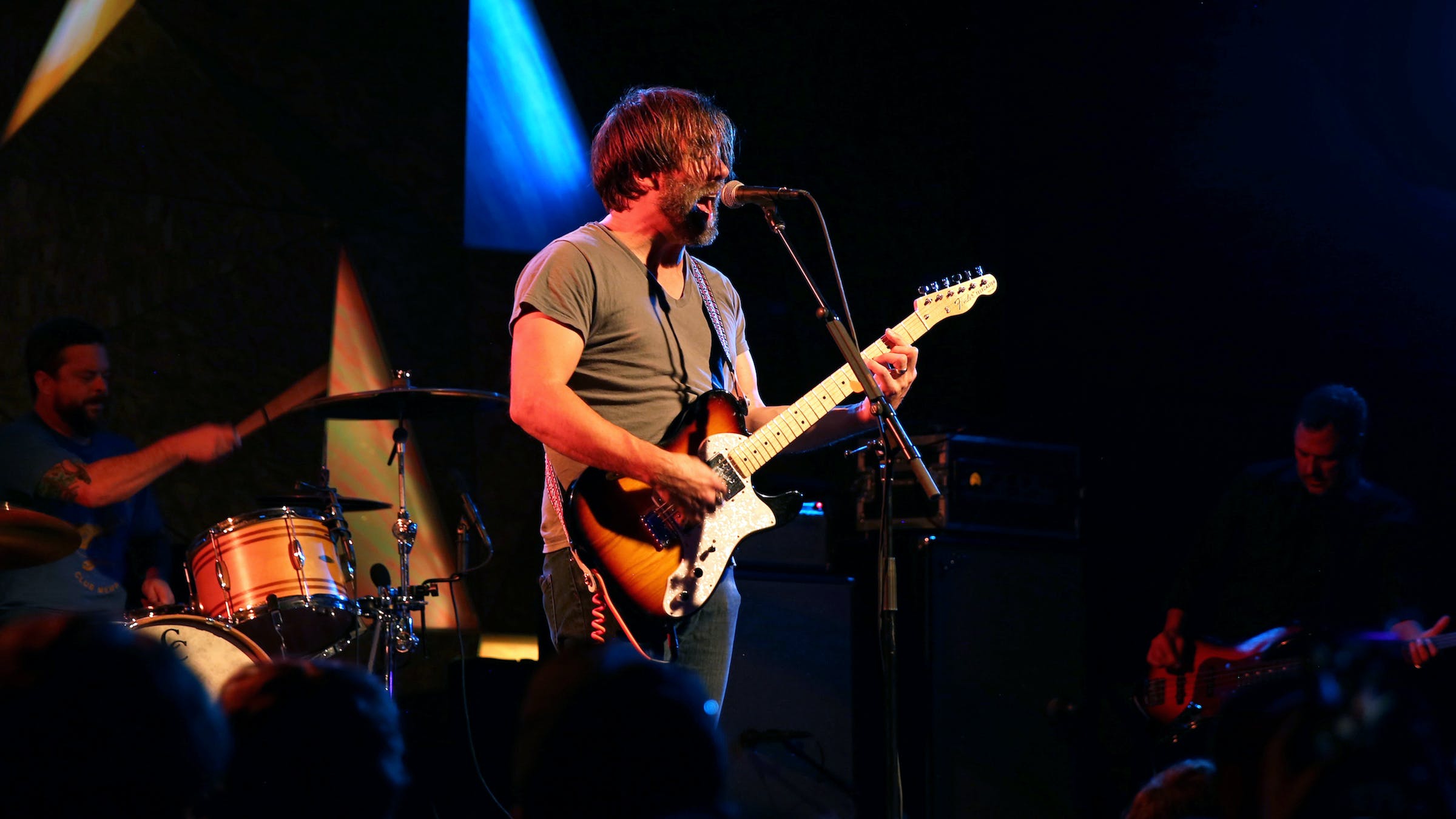 I’d never considered getting a tattoo until I heard Mineral’s EndSerenading. A lyric in the album’s seventh track, ALetter, refers to one in such an offhand way that only an idealistic, sentimental, melodramatic 17-year-old could have possibly taken it as an instruction, a mission:

Like this wide-eyed narrator with so much to learn, I’d never heard anything like EndSerenading: a gut-wrenching, emotional bludgeoning; a supremely heavy piece of rock without a single metal riff or growled vocal; a gorgeously wistful work so intense that it would quite literally destroy its makers, breaking up the band before its release in 1998.

The fact that I would permanently etch a symbol of this record into my forearm a mere two years after stumbling upon it is embarrassing enough, putting the “emo” in emo. But my teenage devotion to Mineral’s sophomore effort was so intense that I would develop a religious, séance-like ritual of listening to the record in dark solitude. I’d hunt down every single, EP, and B-side the band had ever released. I’d invest in every subsequent project – whether solo or collaborative – from vocalist/guitarist Chris Simpson, bassist Jeremy Gomez, guitarist Scott McCarver, and drummer and Gabe Wiley. I’d seek out all that EndSerenading producer Mark Trombino had ever recorded (hello, Jimmy Eat World’s Clarity). I’d even -- gulp -- adopt the album title as my AOL Instant Messenger screen name.

So nearly two decades later, when I finally meet Chris and Jeremy backstage before their show at Brooklyn’s Elsewhere, I can’t keep the feels from flooding back. Though Mineral now take up far less of my attention than they once did, the mere sight of them in the flesh reflexively brings up the longing, sadness, and frustration of my late teen years. Immediately and involuntarily, I find myself promising my heroes that I won’t punish them in the interview that’s about to transpire, despite the impact their work had had on me as an impressionable high schooler.

As evidenced by the crowd at the venue, I’m not the only one to have ever harbored an obsession with the band. As they play onstage, grown men scream unabashedly intimate lyrics at the top of their lungs: 'I wish you could put your ear up to my heart / And hear how much I love you!' And the nostalgic refrain from a song called 80-37 on the band’s first album, The Power Of Failing, hits closest to home when it’s belted out by longtime fans: 'Those days are gone now and we must carry on / But I will not forget the things I learned on your front lawn.'

“People make very visceral connections to this music for one reason or another,” Jeremy admits. “The majority of the Mineral fans are like that – and they're the ones that stick around and talk to us after and thank us for things. It's awesome.”

Due to the intense and introspective music that Mineral produces, the band finds that they’re more or less incapable of attracting “casual” fans. Their music doesn’t work as the background soundtrack to doing dishes; for better or worse, it demands your attention. With Mineral, you’re either all in, or it’s not your thing.

Much of this has been captured in the new book One Day When We Are Young, written by Mischa Pearlman, which celebrates the band’s 25th anniversary with personal stories from a who’s who of rock stars and industry players – including Jim Adkins of Jimmy Eat World, Frank Iero of My Chemical Romance, and Tim Kasher of Cursive, to name a few – about what the band means to them.

But Mineral’s current tour – which takes them through the U.S., Japan, Europe, and South America – isn’t merely a nostalgia act for old fogies like me, a 36-year-old. The band’s legacy is strong enough that kids who weren’t even alive when the band was initially active are paying homage now, too. “We were just talking to someone in DC after the show who was gushing about the band and thanking us profusely,” Jeremy recalls. “He was born in ’97, the year we broke up.”

While Mineral would go on to posthumously inspire an entire subgenre of midwestern emo (see: the entire Count Your Lucky Stars roster), they have also influenced genres that have nothing to do with indie rock – perhaps most famously exemplified when Soundcloud-based rappers Gab3 and (the now, tragically, late) Lil Peep sampled Lovelettertypewriter, EndSerenading’s opening track, for their single Hollywood Dreaming.

“When I first heard that, I was like, ‘Well, that’s kind of smart,’ because there are so many instrumental passages in Mineral – these lilting guitar parts that would be so easy to sample and make something else out of,” Chris explains. But it wasn’t all good: the band initially called out the duo on Twitter for not crediting the band for the loop (not to mention failing to obtain any permission to use it), though Chris has since come around to find more charm in the track.

“More than anything, it’s surprising and delightful that people continue, over time, to discover Mineral’s music,” he tells me, clearly now humbled by the spread of the band.

But despite their fans’ enthusiasm, Mineral are no longer the kids who made the music for which they’re famous. They have real jobs and children of their own. And to be a full-time band in 2019 requires a touring schedule that fills the better part of a year.

“I don’t think I have the energy for it,” Jeremy admits. Chris agrees.

In this way, though their music may still be intense, the band itself is incredibly laid back these days. There are far fewer expectations, and no larger aspirations of selling records or worrying about answering to a label as they once did in the ’90s. At the moment, they take their music career one tour at a time; one show at a time; one song at a time.

“We don't have any long-term goals,” Chris explains. “It feels good to have this freedom to be whatever we want to be. If a few years down the road we decide it would be fun to write some more tunes, we could do that. If not, we don't have to. I'm sure there are people who would be interested in it, but there's nobody like looking at their watch being like, ‘It's time for another. Clock's ticking.’”

Even without such pressure, writing the two new songs that were released alongside their new book to commemorate their 25th anniversary was enough of an arduous, time-consuming task. “We first had to get over that initial hump of fear of being able to actually write Mineral music again," explains Jeremy. “Because that's hard to do for a band that you haven't been in for 20 years.”

“I think a lot of it goes back to Mineral fans being so passionate,” Chris adds. “You can't just casually toss a couple tunes out there, and be like, 'Close enough.' And we also had high expectations for what it needed to be in order for it to be worth doing: it has to feel like Mineral, but it also obviously has to be us now, bridging those two points in time.”

Fortunately, the results of their efforts – Aurora and Your Body Is the World – are two of the best songs the band have ever written. Mineral have managed to do what so many bands dream of doing: capturing the essence of a former life in producing something entirely new. But fans would be wise not to hold their breaths for a new LP anytime soon.

“I feel like we might be pushing our luck to think that we could write a full album's worth of material that would connect in the same way,” Jeremy says. “It's a little frightening to think about it.” He pauses, before adding, “It's not completely out of the realm of possibility.”

Meanwhile, in their live show, they’re still getting acquainted with the new material, figuring out how to perform their first new songs in over 20 years.

“I enjoy playing them, but they feel so much more tenuous to me,” Chris says. “The other stuff, we've rehearsed so much. These [new] ones feel pretty comfortable with all the old stuff, but every night when I see these new songs come up in the set list, I’m like, ‘Alright. Here we go. Buckle up.’”

Whereas most bands exist to introduce new music in their sets, Mineral aren’t most bands: after a two decade break, they’ve only recently gotten back into the groove with their old music – tunes that had gone untouched for two decades, canonized by fans in the interim.

“At the beginning of the 2014 tour, it was really trial by fire with the Bowery Ballroom shows in New York – just packed out every night,” Jeremy recalls of the band’s initial reunion. “We were like, ‘Holy shit – what did we get ourselves into? We weren't sure if this was going to work… And then as it went on, and so far on this tour, we've settled into a pretty good spot.”

About an hour into Mineral’s powerful set at Elsewhere, a roadie hustles onstage and whispers in Chris’ ear as he hands him a guitar. Chris passes the message to Jeremy, who announces that the venue is giving them much less onstage time than they’d planned for. The crowd erupts into boos over this unexpected and unexplained curfew enforcement.

Mineral 2.0 don’t seem frazzled by it at all. Instead, they act decisively, skipping three songs and diving into their planned encore for maximum impact: &Serenading –> Lovelettertypewriter –> Palisade –> Parking Lot.

In the final verse of that last song, the closer to The Power Of Failing, Chris sings:

The last notes ring out, and with the song’s final 'laugh at myself', the band literally throw their instruments off, sloppily stumbling from the stage amidst a sea of sustained guitar feedback in veteran rock-star fashion.

“Ha-ha-ha,” says Chris quite deliberately into the mic, before thanking the crowd and fleeing the stage himself.

Mineral may never make easy, breezy music – but 20 years later, things do feel a bit lighter. And that’s gotta count for something towards the next 20 years.