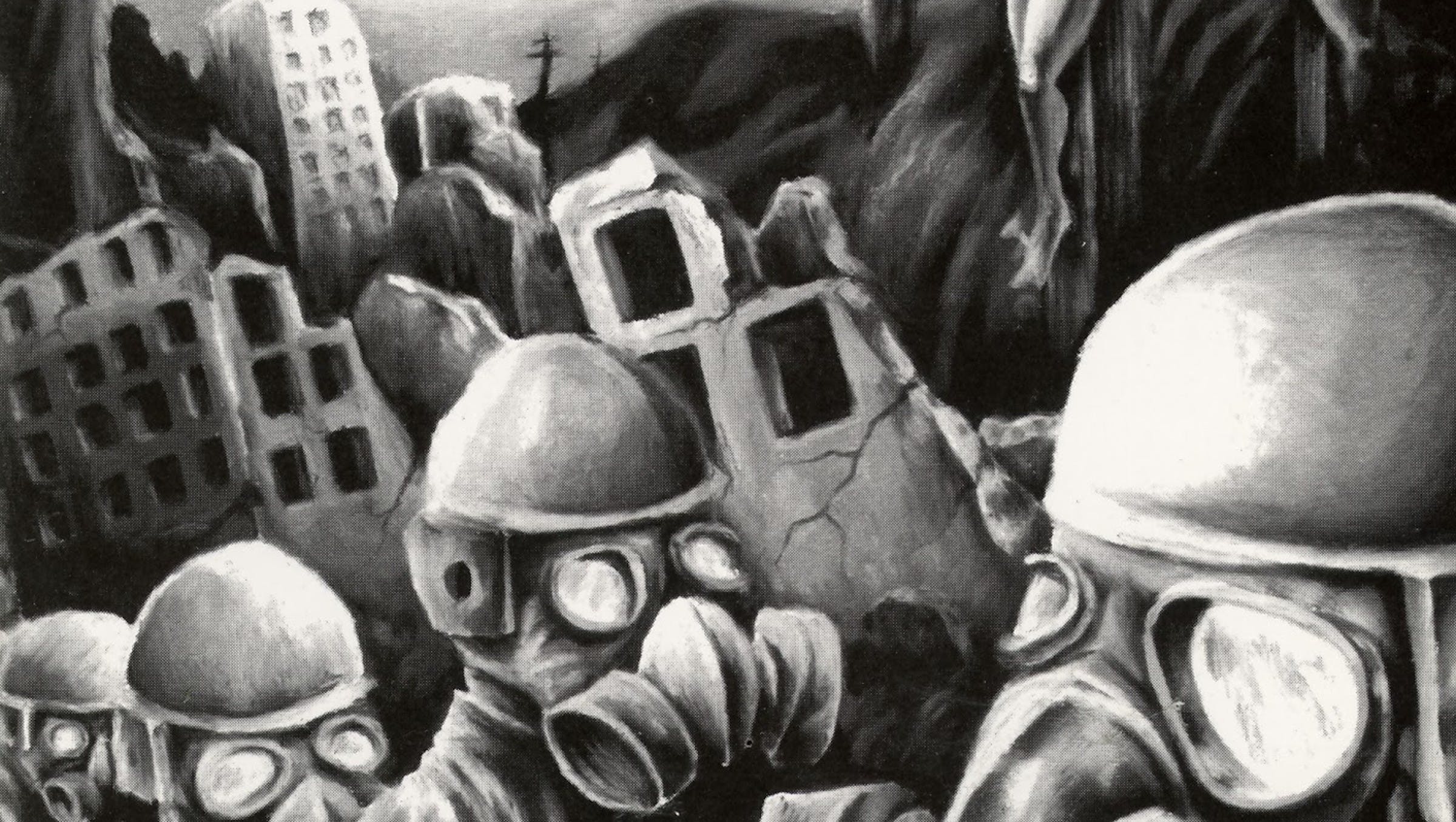 For a generation of fans, All Out War’s sophomore album For Those Who Are Crucified is one of the heaviest hardcore albums of all time. From the pummeling drum intro on Soaked In Torment, to vocalist Mike Score’s hellish shriek, to the crushing guitar chugs and serrated leads, the album is one of the foremost milestones in the metallic hardcore canon. And despite celebrating its 21st birthday this year, it still sounds positively massive and well-produced by modern standards.

For Those Who Are Crucified was actually produced by a young Steve Evetts, who would go on to work the boards for the likes of The Cure, Senses Fail, The Dillinger Escape Plan, and many more landmark metalcore and pop-punk bands of the 21st century. But back in 1998, Evetts had the musical vocabulary to translate All Out War’s metallic inclinations into the hardcore aesthetic of their live show -- which was still a contentious creative move at the time.

“We were always a misfit in the scene we were playing in,” remembers All Out War vocalist Mike Score. “Metalheads called us a hardcore band and hardcore people called us a metal band. That was pretty much what it was.”

All Out War emerged right in the mid-'90s, a pivotal point for hardcore. Traditional youth crew bands were waning in influence, and metal continued to seep its way into the hardcore lexicon. NYHC no longer meant Bad Brains, but Merauder, Darkside NYC, and Confusion. These were bands incorporating aspects of classic thrash acts like Anthrax and Slayer, but All Out War were pulling from German thrash bands like Kreator and Sodom -- groups that few, if any, other hardcore-adjacent groups were citing at the time.

“There were always crossover bands, obviously, that came way before us,” Mike says. “But we were pretty abrasive comparatively speaking. There was very little hardcore involved at our sound at all.”

Nevertheless, All Out War remained entrenched in the hardcore scene for the next 20 years, and were an integral influence on many of the metallic hardcore bands that would follow in their footsteps.

In honor of their blazing new album, Crawl Among The Filth (out 7/26 via Unbeaten Records), we asked members of Code Orange, Hatebreed, Terror and more to share how For Those Who Were Crucified informed their own music.

"All Out War combined elements of NYHC, thrash metal, and death metal -- with maybe the most demonic and painful voice ever -- to create a terrifying and unique heavy hardcore sound. For Those Who Were Crucified hasn’t aged a day, and remains a fresh-sounding and influential landmark hardcore album."

"Don’t recall the first time I saw All Out War, sometime in the mid ‘90s. But they were already well-known and garnering respect around the world. By the late ‘90s, the underground heavy music world was percolating with crossover metal/hardcore bands that were all about to turn the industry on its ear, and All Out War was in the thick of it. Their previous releases are classic. However, the personnel line-up and the production value on For Those Who Were Crucified perfectly captured the band’s live show. Personally, I can say that they were responsible for putting our Hudson Valley area on the map for heavy music. No band before them, homegrown from our area, has made the same waves."

"All Out War is one of the most consistent and powerful hardcore bands of the last 20 years. Every release is bone crushing with lyrics that make you think and see just how ugly mankind is. On top of that, [they’re] some of the best and realest people I have met in this scene."

"It was around 1996 when my circle of friends became obsessed with All Out War after seeing them play a matinee at The 360 Club in Toronto. They played a jaw-dropping amalgamation of Slayer, Kreator and Cro-Mags which set up these insane mosh parts that would inspire everyone in the room to act like a prison riot was breaking out. When word of a new album on Victory Records began to circulate, we could barely contain our excitement, and when FTWWC was finally released, it did not disappoint.

"The sick mix of new songs and re-recorded classics were now refined by a better production quality and wrapped in iconic artwork that somehow managed to sharpen the band's teeth and make everything ten times more vicious. I mean, as soon as the thunderous intro to Soaked In Torment hit, it was game over. Any time. Any place. On record, in concert, or otherwise. It was game over."

"All Out War is one of my favorite bands of all time. As a young kid discovering metal and hardcore at the same time, they had it all for me: hardcore aggression and ethics mixed with everything I liked about late '80s/'90s metal. I look forward to every record, which I can’t say about most bands I grew up listening to."

Above: Guitarist Jim Antonelli, back in the day.

"In the mid '90s, my musical tastes straddled the lines between metal and hardcore, and those lines were becoming more and more blurred as bands continued to push the boundaries of extreme music. One band that stood out above the rest was upstate NY’s All Out War. Their riffs had the sinister vibe of Slayer combined with a downbeat stompiness that made you want to punch your best friend through a wall (in a loving way of course). Those early shows were a bloodbath of riffs and fists, with Mike Score presiding over the mayhem with his incomparable stage presence and maniacal shriek.

"For Those Who Were Crucified brought the mosh and the metal with a production that was light years ahead of most records from that era. This is truly what 'metalcore' means to me. Combining the down-picking energy of thrash with the brutality of beat down mosh parts that had you swinging for the fences. Stoked that they are still out there showing the next generation how it is done!"

"All Out War was one of the first bands I really got into when I started to discover hardcore, and more specifically heavier/metal influenced hardcore. I remember hearing them on...I think it was my cousin's Victory Style comp (it was Claim Your Innocence) on the way to a Union 13 show as a young punk rocker, and thinking, 'What the fuck is this?' I had been into Earth Crisis, Strife, Blood For Blood, and Hatebreed at that point, but this was something different. I remember thinking, 'This is just crazy metal but with some kinda street edge to it.'

"Hearing Soaked in Torment for the first time...words can't explain. I remember those two tom hits before the heavy riff drops in, and until this day it still gives me chills. This record, to this day, is still one of my biggest influences, and will always be one of my favorite records of all time. It made me realize it was OK to like metal as a young hardcore punk, and it helped me discover more bands that shared the same affliction. 18 years after when I first heard it, it still holds up, and has aged very well, and will continue to to do so. It's timeless. This band has never put out a bad record. Ever."

All Out War's new album Crawl Among The Filth comes out July 26th on Unbeaten Records, and is available for preorder.