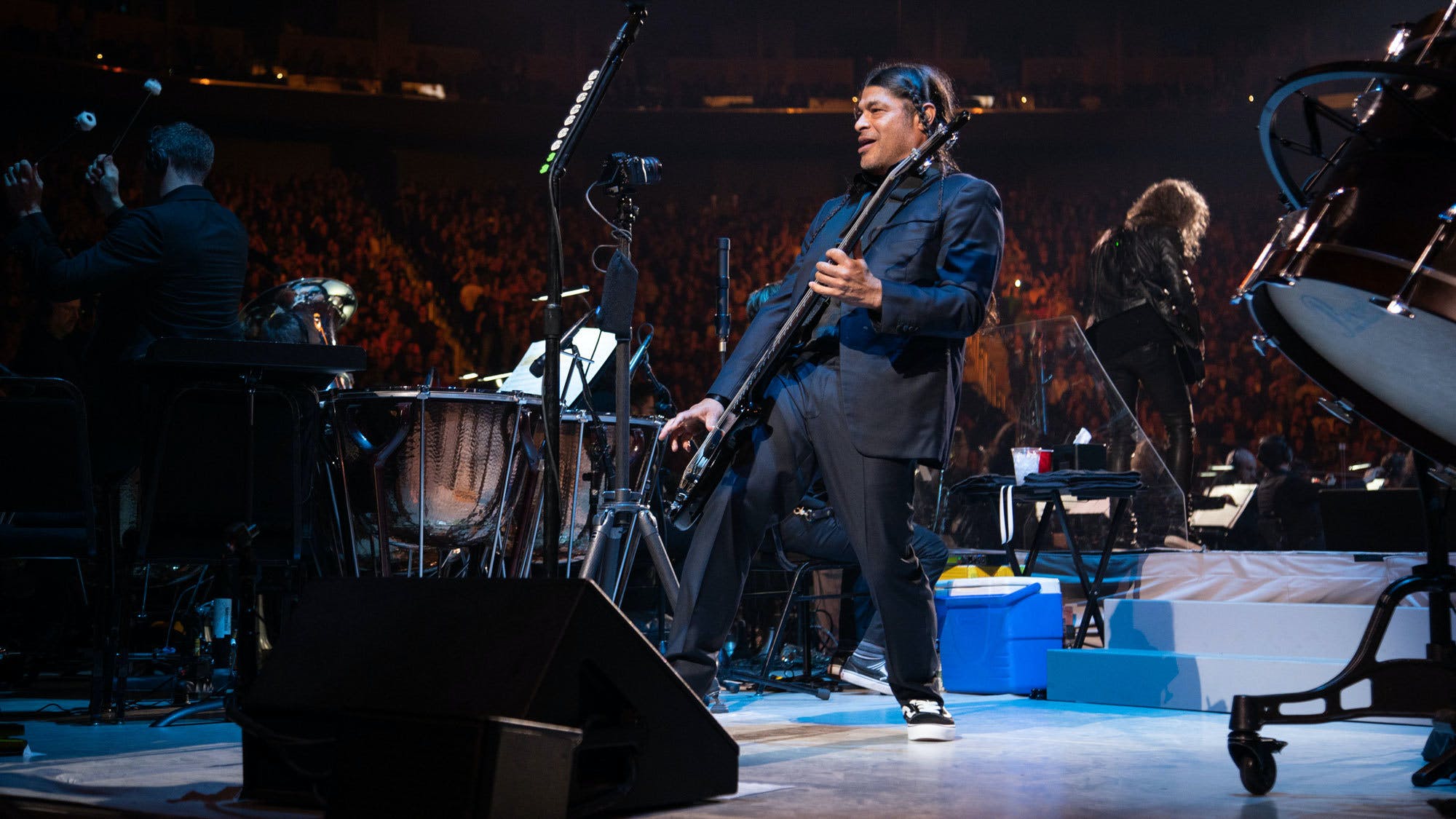 In April 1999, Metallica made history. And in September 2019, they did it again. To mark the 20th anniversary of their incredible S&M album, the Four Horsemen rode into San Francisco’s Chase Center for two nights alongside the city’s symphony orchestra. The resulting album – handily titled S&M2 – showcases a career-spanning set from the thrash legends, re-arranged with an almost-80-piece orchestra. It’s a staggering achievement, featuring a breathtaking rendition of All Within My Hands, an awe-inspiring No Leaf Clover and a special double-bass rendition of Cliff Burton’s masterpiece (Anesthesia) – Pulling Teeth.

“It was one of the most powerful experiences that I’ve ever had,” says bassist Robert Trujillo, speaking exclusively to Kerrang! at his home in Malibu, California.

“You’re surrounded by all these stringed instruments and there’s a lot of power in that,” he continues. “It lifts you and you almost feel like you’re flying. It’s almost like this sonic journey that you take with these musicians who probably feel something similar, even though they feel it all the time. It was really special as a musician to experience that side of the sonic spectrum.”

The recording of S&M2 took place across September 6 and 8, and were the first shows performed in San Francisco’s new 20,000 seat arena, the Chase Center, coming just days after their epic European stadium run. So immersed was Rob in the Euro tour that he didn’t actually have time to be nervous about the mammoth undertaking just around the corner, laughing that the pressure of his and Kirk Hammett’s nightly cover doodles provided more than enough stress.

“I remember James [Hetfield] coming in the dressing room a week or so before and asking, ‘Are you guys nervous?’” he explains. “And we were like, ‘Actually, no!’ Because Europe was such an intense run for us that it’s hard for anything to outdo the nerves you feel when it’s just two of you in a stadium playing some cover songs in a different language.

“We were actually very excited about it and not nervous; I love that feeling when you can go in with a different kind of nervousness. For me it was the excitement of doing something that I’d personally never done before, to feel the power of the orchestra, and to know that everybody in that building is absolutely excited and thrilled to experience this side of Metallica.”

But S&M2 isn’t just an orchestra playing along to Metallica, it’s so much more. The two entities share a spirit of pushing boundaries and audience expectations to their very limit, intertwining orchestral manoeuvres with metallic bombast and a sheer intensity. It’s undoubtedly a laborious, intricate process, spearheaded by mastermind Lars Ulrich.

As Rob explains, Lars and conductor Edwin Outwater spent a long time working on song choices and arrangements, with a nod toward the previous S&M album.

“Lars has always been great at cultivating a set and bringing it to life,” he enthuses. “We trust Lars very much with that, and I’m sure James had a huge say in it, too. There’s a moment where [James] is singing with just the orchestra on Unforgiven III, and that was a very powerful moment for me as a fan. To be a part of that particular version of the song was really cool.”

There are many moments throughout the double-disc odyssey of S&M2 that stand out. And while the performance may have been conceived as an anniversary celebration for the initial Symphony & Metallica release, the record is more than capable of standing alone as a unique artefact in the Bay Area legends’ storied history…

Rob, do you remember the first time you heard S&M1?
“I would have been in Ozzy’s band and working in the studio with him around that time, so I was really in the thick of Ozzy Universe. I remember hearing about it and it was related to a show they were doing in San Francisco, at Berkeley [Community Theatre]. I thought it was very cool. In my mind it was like, ‘There they go again, Metallica does it again.’ They’re always finding ways to challenge, and at the time I was thinking they were 10 or 20 steps ahead of everybody else.

“No Leaf Clover was the first song I heard from S&M1 and I was very impressed: it’s a great song, it’s got a great balance of dynamics, the power of the metal but also the orchestra, you can bob your head to it… It’s like riding a wave with that song. But I was impressed with the whole concept. It didn’t feel like it had been done that way, to that degree, with that type of band. I didn’t know much about [conductor] Michael Kamen so the whole thing was very new to my ears, and I just thought it was a very powerful statement by Metallica.”

One of the stand-out moments of S&M2 is (Anesthesia) – Pulling Teeth on the double-bass. How did seeing that make you feel as a musician and as a fan?
“It was a tremendous statement. I just love the power of the acoustic bass and any acoustic instrument. Scott [Pingel, principal bass of the orchestra] came in to basically present the idea. Scott is a tremendous musician on all fronts and this is his arrangement. He put his time and energy into this piece, which has not just Cliff’s solo itself, but he’s incorporated classical elements of that instrument into this piece, so there’s a very collaborative spirit in it. Originally we were going to do something where I was involved as well and I said, ‘The statement you are making sounds so powerful and beautiful, I don’t need to be a part of this.’ I meant it respectfully, it’s incredible. I was like, ‘You and Lars need to do this. This is your moment.’

“Scott and I became friends after that. He’s a well-rounded musician with a rich history – not just of classical music, but an appreciation and player of jazz and also someone who has the utmost respect for Cliff Burton. The musical statement that he made was a highlight of the show. I’m a lover of all musicians and great players, but that instrument in particular is so powerful, and I often feel like it’s underused – especially in rock and metal. To see it come to life was the ultimate tribute to Cliff Burton and also [his father] Ray Burton, who was there with his family to experience it.”

The second half of the record begins with 15 minutes of classical compositions and no Metallica. Why was that decision made?
“This show wasn’t just to highlight Metallica, this was a true collaboration between the orchestra and its players, as well as the band. Yes, we’re playing the music of Metallica, but at the same time we’re celebrating classical music and the San Francisco Symphony, as well as [musical director] Michael Tilson Thomas. The orchestra had the opportunity to do something on their own and feature themselves. It’s hard to take the spotlight away from Metallica (laughs)… but we were all for it.

“One of the things that I thought was really special was the energy and camaraderie. Meeting all the bass players, they’re telling me about their instruments, and some of these basses were literally a couple of hundred years old. They belonged to the orchestra, basically. Any bass player that goes in has this opportunity to play this fine instrument that’s been around for a couple hundred years and I didn’t know this. There’s all this rich history and pedigree in terms of who’s who, what they’ve done and where they’ve been. There’s a lot going on with the orchestra, much like there’s a lot going on with Metallica. I’m sure every orchestra has its history and lore, so it’s really neat to be a part of that. Again, it creates that respect and balance within the show itself. During the show one guy was smiling at me and throwing the horns (laughs). It was pretty cool.”

This must have been the first Metallica show you’ve played with no mosh-pits, and in quite a high-brow surrounding. Was that pretty surreal?
“That was surreal for me, but at the same time I have enough knowledge and respect of classical music – in the same way I do of jazz and other styles. I had friends going to the show and they said they were going to wear tuxedos and suits out of respect for the style and art form. I did see some people trying to mosh at times (laughs). There were a couple of moments in the show where it was more highlighted on the orchestra, and fans were very respectful, but it must’ve been very different. At the same time you’re sharing something that’s hopefully educating and helping a thrash metal fan to understand that this is going on too, and it’s very powerful. We might not even be onstage at that moment but I really believe everybody came out of that show with a heightened sense of not just respect, but knowing they experienced something special. For me, that was the goal and I think we achieved it both nights.”

Do you think we could see an S&M3 in 10 years’ time?
“I think so. To me, S&M2 is an extension of where we are now and how we continue to grow. We enjoy challenges, so if there’s an S&M3 and we’re still healthy and kicking ass then I know it’s something we’d take on again. All Within My Hands, the acoustic version of that, having Kirk sing a harmony part with me – I’d like to see more of that in S&M3 (laughs). That was also a special moment for us as a band, I know it was special for James – he really enjoyed having that support for his vocal on that song. There were a lot of moments where we were proud of what was happening – whether it was Scott and Lars doing (Anesthesia) – Pulling Teeth or All Within My Hands or us playing a non-Metallica song with the orchestra, it keeps you on your toes and keeps things exciting. I’m sure, 10 years from now, if we have enough left in the tank then we’ll definitely take it on. Especially Lars, he’s always pushing for the challenge, it’s how he’s wired.”