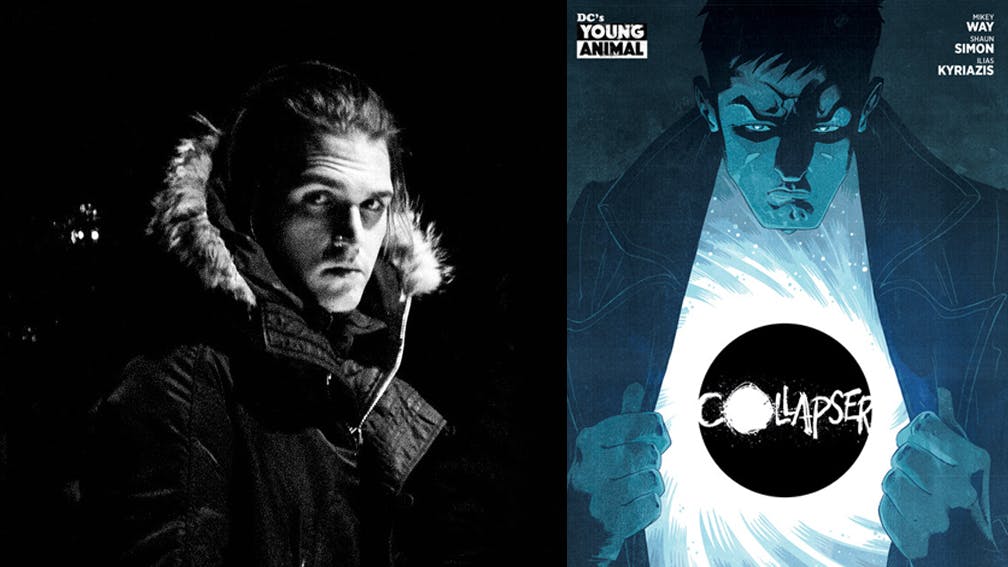 "The time has finally come where I can share something I’ve been working on for the past couple of years!" Mikey posted on Instagram announcing the news. "Keeping this one a secret has been hard, as I’m beaming with excitement about this project. I want to present to you Collapser!! The next wave of @dccomics Young Animal has been unleashed on the world. I am honored to say that my story (with one of my best friends Shaun Simon!) will be part of this wave. Coming out July 17th!

"Also wanted to take a second to thank @jimlee and @gerardway for this opportunity! And @iliaskyriazisfor making our visions for Liam and the Collapser world come to life!"

A synopsis of the story reads: "Liam James is a wannabe DJ whose life goals are almost completely dashed by his crippling anxiety—until a package arrives in the mail containing a black hole that gives him amazing powers and draws him into a cosmic conflict far beyond anything he’d ever imagined. But Liam will discover that when it comes to life, love, mental health and superhero responsibilities, there’s no such thing as a quick fix, and that power comes with a cost."

Gerard and Jeremy Lambert's Doom Patrol will also be making a comeback with an all-new series, with Doom Patrol: Weight of the Worlds set for release on July 3.

"The Doom Patrol will go on an epic road trip around the solar system, facing off against the unusual and bizarre including the fanatical fitness fiends of planet Orbius and the Marathon Eternal," the synopsis explains. "Big changes are coming for these unusual heroes, including Robotman coming to terms with his new life as a human."

Gerard says of Young Animal and his latest projects: "So excited Young Animal is coming back! We’ve been working tirelessly in the background for a while to bring you more Doom Patrol, and two new books— Collapser and Far Sector. I’m going to give you a glimpse of each one in the next few posts, starting with Doom Patrol.

"Many people will be working on this next incarnation of the World’s Strangest Heroes. I’d like to welcome my co-writer Jeremy Lambert (@jeremyfranklambert) as well as the following artists and collaborators – James Harvey (@harveyjamz), Doc Shaner (@doc_shaner), Nick Pitarra (@nickpitarra), Becky Cloonan (@beckycloonan), Michael Conrad (@michaelwconrad)and welcome back Tamra Bonvillain on the issues not colored by the line artists. And Todd Klein on letters. And of course, the amazing Nick Derington (@nickderington) on covers. So a lot of the old gang is still here. Drops July 3rd!"