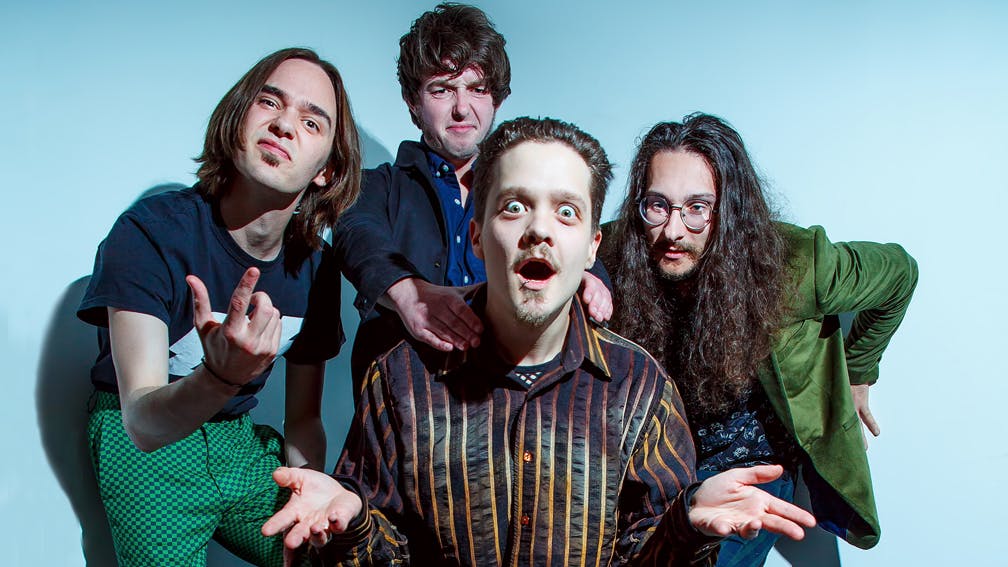 Asked to describe the sound of his band, Mother Vulture, guitarist Brodie Maguire doesn’t do quite as well as the eight-word sales pitch nestled on their Twitter page. While the young music-maker talks about “punk energy” with “a tinkle of classic rock” in the say-it-like-you-see-it realm of social media, the young Bristol-based quartet announce themselves as ‘hectic blues punk that wants to hurt you’.

Also, “Word on the street is that we’re a band to see live,” says Brodie. “We’re a bit nuts onstage. A phrase that’s been thrown around a lot lately is ‘cartoon violence’. I guess we look a bit insane onstage. We’re a bit scary. But not properly – we’re just funny. We’re up there beating ourselves up… imagine Wile E. Coyote smashing himself to pieces. We don’t have a lot of self-preservation when we’re playing. But Matt [West] on drums is there at the back, just holding everything together. We never stop playing the music.”

After a couple of years writing songs simply for fun, Mother Vulture – whose line-up is completed by vocalist Georgi Valentine and bassist Chris Simpson – decided to start taking their band seriously in 2019. Despite the advent of a global you-know-what, the guitarist estimates that in the past three years the group have played somewhere in the region of 200 concerts. Certainly, the blood and thunder sound of their rocking and rolling debut album, the fabulously titled Mother Knows Best, released last month, is of a band that have made their bones on the road.

In fact, without the pandemic, Brodie reckons Mother Vulture would have played twice the number of gigs. Speaking to Kerrang! on the first Monday of winter, the guitarist drops in on the Zoom call via his phone while his group stops off for tea and a wee at a “nice service station” in Gloucester. Last night, the quartet played in Wales; tomorrow evening, they’ll be saying “hello Edinburgh”. Usually, the four music-makers sleep in their van. Tonight, though, when they get to the Scottish capital in six or seven hours’ time, they’ve decided to treat themselves to a night beneath fresh linen. Because, God knows, it’s a long way to the top if you wanna rock’n’roll.

“We never, ever usually stay in hotels, but we’re all pretty tired so we thought we’d treat ourselves,” the guitarist says.

“We want to be playing O2 Academy venues within the next year or two,” Brodie says. “And we were want to be either selling them out or else getting really good crowds there. Because we’re starting to get to the point where we’re booking venues up and down the country and we’re getting close to selling them out. But I think the big thing that we need now is to get on tour with some bigger bands who aren’t afraid to take us out. I think that one of the problems is that we’ve approached other bands, or [their] management companies, or whatever, who all really like the band.

“The only problem is, they don’t want to go on after us!”

Mother Knows Best is out now via Lockdown