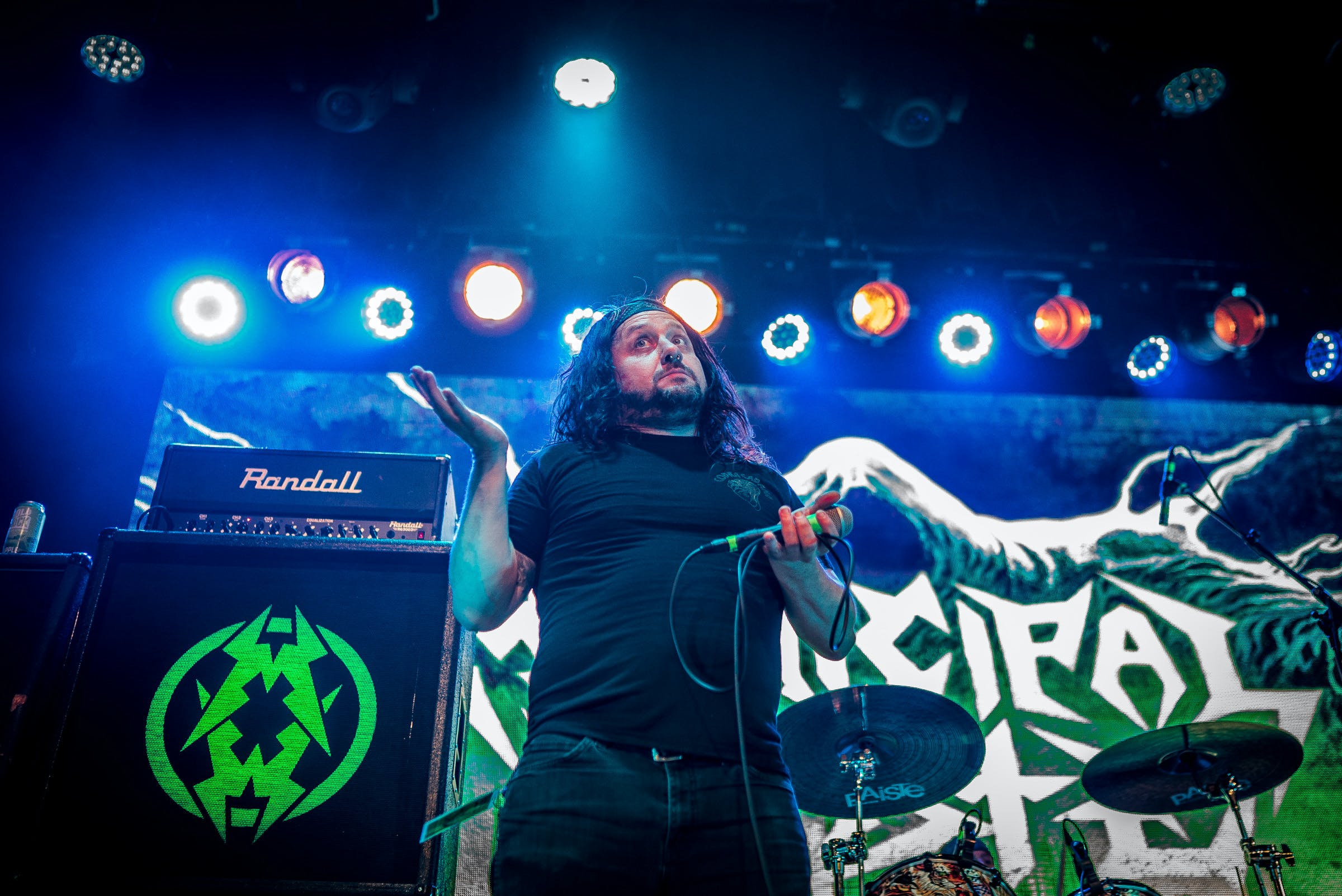 There’s an edge on the audience milling around Warsaw in Greenpoint, Brooklyn. The good-timey pizza-loving vibe of the retro thrash movement is decidedly absent; instead, huge middle-aged dudes in bomber jackets and patch-covered satanic thrashers shoulder their way through the old theater and swill tall boys of Polish beer. It feels like the NYC stop of Municipal Waste’s Speed Of The Wizard tour has taken a slightly rougher tone than the stoner Gandalf on the poster would suggest. Maybe people are salt that stony co-headliners High On Fire dropped off due to Matt Pike’s partially-amputated toe. Or maybe it’s the recent addition of old-school crossover act Nuclear Assault that injects those in attendance with the no-bullshit attitude of late-’80s hardcore. Either way, there isn’t an ironic hipster in sight, and everyone bristles with spikes and bile.

Haunt from Fresno, CA, provide what might seem like an odd start to the evening, playing shreddy power-thrash with a distinctly classic vibe. Singer and guitarist Trevor William Church is definitely mugging it up, leaning back as he shreds and ending the last chord of the set with a hand swung up and out into the air. And yet, maybe because of their dedication to a solidly old-school metal vibe, the crowd absolutely loves them, and though there isn’t a ton of moshing, every track ends with hands up and appreciative applause.

Toxic Holocaust are much more in keeping with the tenor of the show, and they officially inspire the crowd to break a sweat. Frontman Joel Grind looks much more settled and dad-like than he once did -- gone is the blond poofball over the headband -- but he sounds as grating and vicious as ever, and the band’s guitar has a streamlined roar to it that is wonderfully monstrous. The 'Caust rip through a tight, stripped-down set of classics from across their catalog, including slappers like Nuke The Cross, Bitch, and Acid Fuzz. In return the younger speed freaks in the pit whip themselves into a frenzy.

Nuclear Assault have nothing to prove, and they know it. Frontman John Connelly begins the set by announcing they just signed on to the gig a few days ago, “so we’ll see what this sounds like,” while frizzy-haired bassist Dan Lilker (ex-every other band in existence) thanks Municipal Waste for having them before saying, “But if it weren’t for us, you wouldn’t even be here.” The band then launches into a furious set of old-school crossover classics, and the fans do their best to remind everyone that millennials aren’t pussies by going full bore in the pit. Bodies slam, fists fly; one asshole in a white jacket just starts spitting on people. Connelly and co. may have to read lyrics off of their phones, but the crowd's sheer abandon just proves they can do whatever the fuck they want, and after the set ends at least a third of the crowd trundles out.

Warsaw trickles out rather than vents, with fans hanging around the bar for one last Zywiec before heading home. The streets are full of leather jackets and a quilt of back patches. The evening’s salty vibe has been exorcised, and now all are in a sweat-sheened state of chill. The party, it seems, lives on.

What lurks at the end of that nine-minute album closer? Here are the 11 best tracks hidden away at the ends of your favourite albums…

Municipal Waste and Napalm Death will be on the tour this October with Sick Of It All and Take Offense.