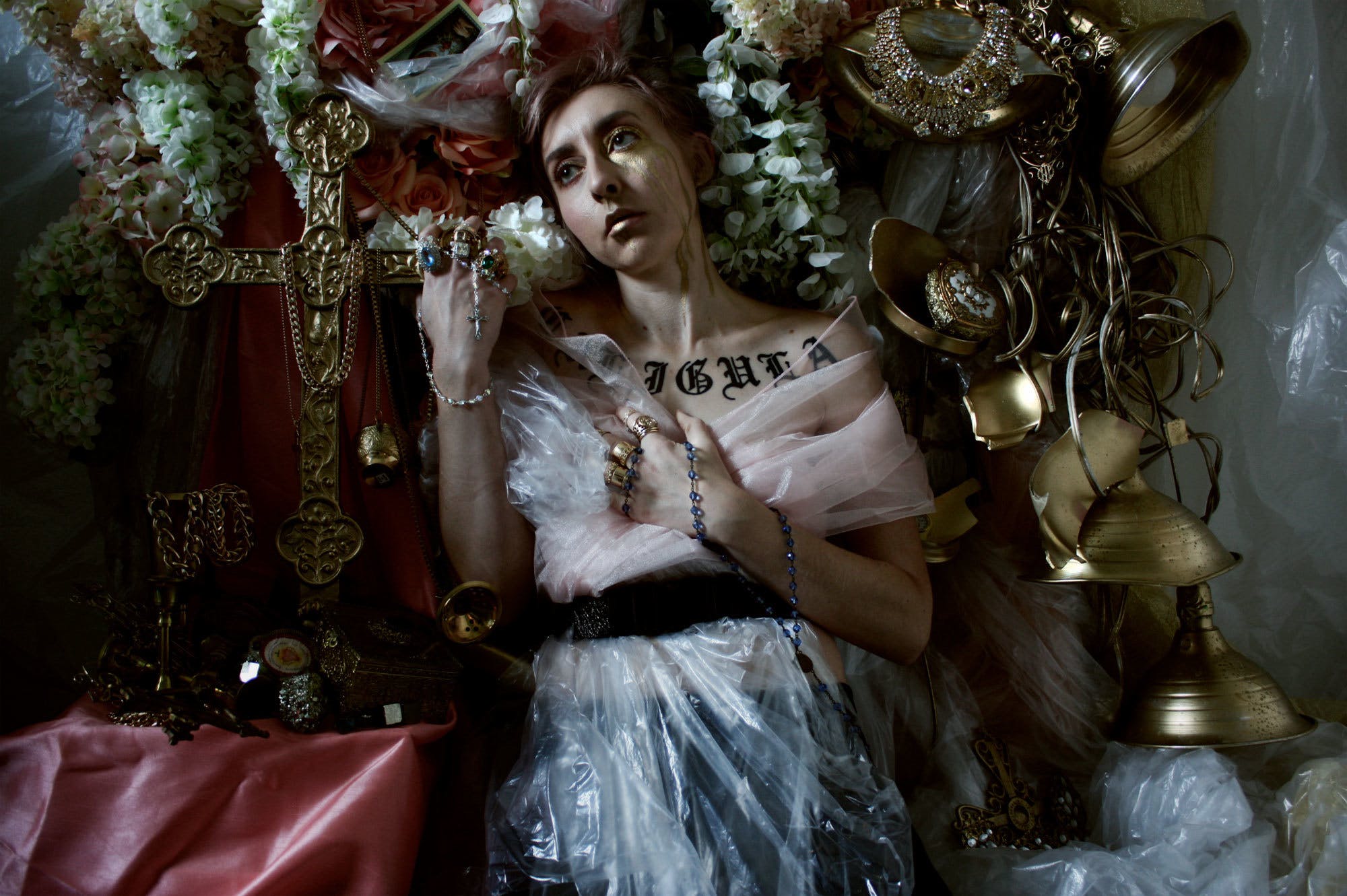 “I’ve had a difficult time finding justice in the world, finding accountability for the people who have done harm to me… The music is my way of holding people accountable and finding justice. My way of finding revenge.”

These are the powerful words of Kristin Hayter; a survivor of domestic abuse who channels her pain and aggression into Lingua Ignota, an ambitious, breath-taking project that incorporates everything from opera to noise.

“I wanted to do something that was different, that was fresh and solely my vision,” she tells us from her home on the West Coast of the United States. “I didn’t want to adhere to any genre or categorisation where there are rules or limitations, I wanted to make something that was authentic and honest.”

As well as being genuine, the new Lingua Ignota album Caligula is brutal. With 11 tracks, three of which are over the eight-minute mark, it is an exhausting, punishing listen. Something Kristin laughs at now.

It’s perhaps a little more accessible than 2017 LP All Bitches Die, but Caligula (her first album on Profound Lore) does require more than one listen to get your head around. Originally described as an “outsider’s opera”, its labyrinthine structure ends the way it begins, but not before making your brain squirm inside your skull.

“I want to give a voice to something that’s ineffable and I want people to understand something that’s intrinsically difficult to express,” explains Kirstin. “I’m also making fun of myself a little bit, because I see the things people say about me: they say I’m making work to be controversial or that I’m a bad feminist – whatever people say I see it, and I incorporate that response into the music.”

But Lingua Ignota didn’t start as a musical project; it grew from Kristin’s graduate thesis at Brown University. The 10,000 page document titled Burn Everything, Trust No One, Kill Yourself examined the sexually violent lyrics of pornogrind bands like The Meat Shits and contextualised them against her own experiences. Before long, she had taken her work into the Providence, Rhode Island DIY noise/metal scene and began experimenting with the confrontational aspects of her own work, self-releasing two records and touring with noted experimental sludgemongers The Body.

Today, on the cusp of releasing her new album, Kristin is in great spirits; talkative and contemplative, despite the early wake-up call. She’s sure about herself, often taking long pauses to think about her answers instead of blurting out the first soundbite she can think of, and has a clear vision for what she wants to do with Lingua Ignota. Despite this confidence, however, she still has a sense of removal from her art.

“It all comes from me, but there’s a certain element of disassociation that comes with performing under this name,” says Kristin.

In her live shows, Kristin stands amongst the crowd with the lights down low, hiding in the shadows, swinging lights above her head to disorientate the audience and provide another, brighter focal point.

The name itself, Lingua Ignota (Latin for unknown language), comes from medieval mystic Hildegard of Bingen, who supposedly invented the language through divination.

The disconnect doesn’t stop at using a pseudonym or shadowy performances. Kristin removes herself lyrically, admitting the difficulties of processing the subject matter face on, preferring to take the lyrics from “a personal or confessional context" and put them into an allegorical one.

“A lot of my text is appropriated from different sources,” she says. “Some of it is stuff that people have said to me in a personal or intimate setting, some of it people have said about my work, some of it taken from the words of men who abuse power in our communities or the world at large. A lot of the language is biblical, putting in terms of absolutes, good and evil.

“Taking it outside of my experiences and not making it about what happened to me, I’m giving it gravitas by giving it context that’s outside of me.”

Kristin’s bloodthirsty lyrics and genre-defying music have manifested themselves in Caligula, named after the insane Roman emperor who fucked everyone and murdered everyone else.

“I was looking at abusive power, madness, depravity, narcissism – all of the things I see in our world politically and in our communities… looking at myself and my own kind of madness as a result of trauma,” explains Kristin of the album title. “I felt that Caligula exemplified the society that we live in on the edge of ruin, the edge of collapse.”

But can music such as Lingua Ignota's help combat the impending the decline of society? Kirstin leaves a long pause.

“Sometimes I wonder if anything I do is helping or just adding noise,” she muses. “I hope that people would hear that I’m trying to create change and I hope that the music combats abusive power and feelings of power in people who have been made to feel weak and invisible.”

Those exploiting their power and abusing others isn’t the resolve of public authority figures, it exists in all facets of society, including the realm of rock music. Yet in recent years, more and more victims have been coming forward and calling out their abusers in public. But there’s still a lot work to be done.

“It’s a very ugly zone right now," says Kristin of the heavy music community at large. “I feel like there’s a lot of ugly behaviour from people who hold shitty views, have shitty politics or hate women, and people are becoming emboldened by the more conservative/right-leaning political climate that we have right now.

“But also, I don’t know that policing our communities is the answer, I don’t know that policing the scene is the answer. I think that call-out culture – as someone who did call someone out – can be kind of toxic and unhelpful for communities. I feel like education and exposure is the right way through, changing how people think as opposed to exiling them or getting rid of them for the most part. It’s complicated.”

Kristin has heard first-hand about how her music is educating people for the better. Not only has she heard from people in similar situations, who say the music “gave a voice to the anger that the world tells them they shouldn’t feel,” she’s also heard from those who’ve done harm, revealing that the music has helped them reflect on their behaviour as they move forward.

“I think that the experience of domestic abuse and sexual violence is so common that there will be more projects that explore things like that in the future,” says Kristin. “Venom Prison are amazing. There are quite a few artists in DIY, punk, metal, noise who make music like this. I think it will become more prevalent having people make work about their experiences and trauma, just because it is so common and it’s real.”

And that’s what truly makes Lingua Ignota so captivating – it’s real. None of this is manufactured for dramatic effect, it comes from a very scary, very honest place and is delivered through sounds that are in no way accessible, yet connect with heavy music fans on a deeper level than a catchy chorus. It’s dark, it’s menacing, and it’s frankly terrifying. But it’s not over yet.

“I don’t know where it will go,” laughs Kristin, looking for the future. “The most important thing is that it remains authentic, it remains real. If it no longer feels necessary for me to make music or to make work about violence, I’ll do that. I don’t want to do something because it’s what people expect or what people want, or what I feel I should be doing because I have a meal ticket to ride.

Being an abuse victim forever isn’t something I’m interested in.”

Kristin Hayter to retire this era of Lingua Ignota in 2023

With Lingua Ignota being an ‘acutely painful’ project for Kristin Hayter, the musician will be “taking a new direction” in the future…

Watch the video for PENNSYLVANIA FURNACE, the stunning first single to be taken from Lingua Ignota's upcoming album SINNER GET READY.