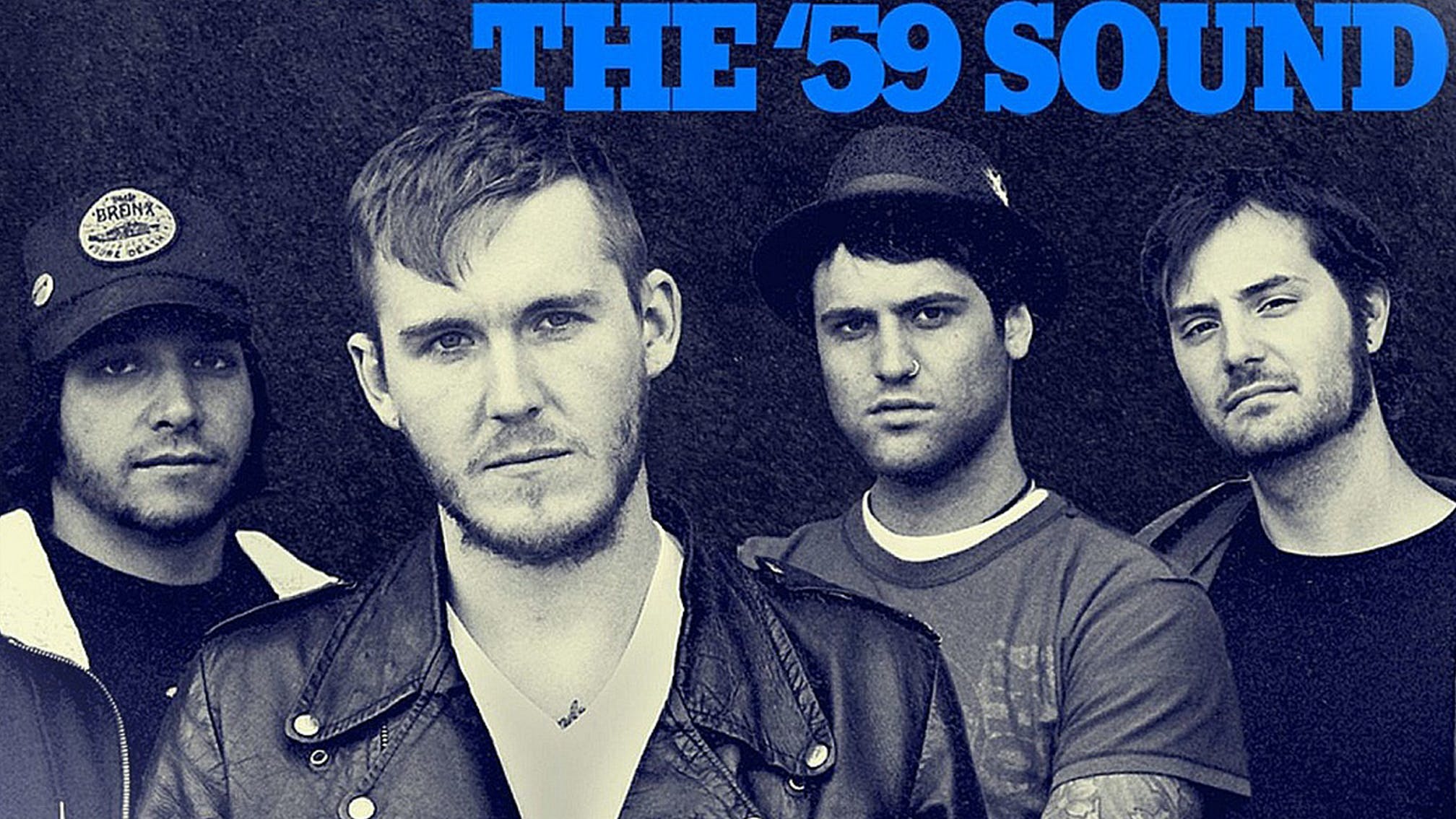 It was early 2008, and four 20-something punks from New Jersey were on the road. They didn’t know it then, but that particular journey – all 2,500 miles of it – was about to change their lives forever. Arriving at their destination in a van that they were yet to pay off, these hopeful young men had made a cross-country trip to the address of their new record label’s offices, SideOneDummy, to pick up the keys to LA’s Oakwood apartments. It would be their home for the next couple of weeks.

The quartet went by the name The Gaslight Anthem and they were there to make an album titled The ’59 Sound.

“When we pulled up, I had zero dollars in my pocket, and $30,000 of credit card debt,” reflects bassist Alex Levine, looking back on a body of work that not only dragged him away from a time of struggle, but gave his bandmates – Brian Fallon (vocals), Alex Rosamilia (guitar) and Benny Horowitz (drums) – experiences that would exceed their wildest dreams. “It’s kind of a romantic story; what I was about to do next was the beginning of the next 10 years of my life.”

The Gaslight Anthem believed in the material they’d brought to producer Ted Hutt. But they never anticipated what these 12 soulful punk songs would do for them.

The group would appear on the front of Kerrang! – having never even been written about in the magazine before – with the words: ‘The Best New Band You’ll Hear In 2008’ splashed across the cover. Their Garden State hero, Bruce Springsteen, would become a fan, and join them onstage at Glastonbury the following year. They would go on to make three more albums (signing to a major label for the latter two), outgrow basement shows in favour of academy and arena venues, and accumulate a diehard fanbase. Then, in 2015, they temporarily hit the brakes.

Three years later, in 2018, the Red Bank natives happily celebrated 10 years of their seminal second album with an anniversary tour and companion LP of rarities and demos, emerging from some well-earned time away to honour the moment their career exploded into life. “Just because a record turns 10, 20 or 30, it’s not a jack in the box moment where you can pop up every 10 years and be like, ‘What’s up!’” Brian laughed to Kerrang! at the time. “But this was the most important record we ever did. So how could we not?”

“When we were making The ’59 Sound, everybody was excitedly throwing out ideas in the studio. We were all free to create. If I was going to give anybody advice based on what I learned from those sessions, I would say, ‘Create the thing, then judge it.’ There’s no way I’d put a Counting Crows reference [on High Lonesome] in a punk song, if I thought about it from a criticism standpoint. But then I said, ‘Well, why not? I like it!’ That’s the beauty of the record, and the spirit of it.

“The moment I realised, ‘Whoa, this is way bigger than I thought!’ was 100 per cent Glastonbury. At that point we looked around and it was like, ‘Well, nobody else played with Bruce Springsteen today!’ We’re from New Jersey, literally no-one knew us, and then one of the best songwriters on the face of the planet was suddenly a fan. That was a prize. In the past I would get irritated that everybody focused on the Bruce connection – they were using something positive to try to make it negative, and I feel like: shame on them, not shame on us. We were just trying to be ourselves and do what we thought was good. In hindsight, I’m proud of that.

“There were also hard times during that period. We had a lot of attention, but we were poor as poor could be. I was living with my parents, and our van was the biggest focus: we were like, ‘If we don’t have enough money for the van, how are we going to get to the next show?’ It was rough, and that’s one of the reasons lots of bands don’t get there, because those times are so hard. Sensible people would stop and be like, ‘This isn’t a good idea!’ But we’re not sensible people (laughs).

“If people can find inspiration in something we do then that’s cool. If anybody wants to say that we inspired them to do something – especially something creative – then I’m thrilled. It’s the biggest compliment. I look back on the record and I play the songs now and I think, ‘Man, I’m glad we did it.’ There’s not a note that I would change.”

“The ’59 Sound put us on the map – especially in England. We hadn’t even played a show there and we were on the cover of Kerrang!. Those songs, and everything about recording them, mean a lot to us. For me, too, it was a part of growing up. I’m a bit younger than the rest of the guys, so I didn’t have a place to live – I didn’t have anything. I was just like, ‘Alright, cool, let’s do this record now.’ I basically had to wait to eat, until SideOneDummy gave us $500 to stock up. The thing is, you’ve got to really want this: you’ve got to have undying passion to get in a van and play shows day in, day out. You’ve got to live it.

“The legacy, the music and what we accomplished means way more than financial gain or anything like that. None of us live in mansions or drive nice cars – that’s not who we were. It’s not how the music business works for bands like us, and that’s the beauty of it.

“Looking back now, I never, ever thought that people would look at the record with such high regard. I believed in it, but when you’re young and you’ve never experienced anything, really, it’s hard to grasp what came next, in terms of… well, all of it. It was crazy. It was things that you couldn’t even dream about. That record is my life. I’ve got children and I’m married, but that record is one of the top five things to me – I hold it so sacred.”

”Every time I play those songs, I’m immediately taken to where I was when we wrote those parts. The ’59 Sound was our first proper studio experience. It was like: we do drums in one studio, and we do everything else in another, and that felt so professional, just walking into this place every morning and there was all this equipment to help you do your thing! I was trying to put piano on everything, and our producer, Ted Hutt, was absolutely opposed to it (laughs). I wanted to do everything that I could on the record. And he was there to kind of be like, ‘Everything doesn’t go on everything!’

“It’s awesome to know that other people have looked up to you for inspiration, and have become successful doing their thing based off of what you were doing. But I don’t think that we were any cooler than anybody else for doing that – we were just trying to be our best version of Hot Water Music! Anybody that’s truly into music – not just doing it to make money – and truly into the art of it, will know going into it that there’s only seven notes and five half-tones, which isn’t much to work with. So anything you do is obviously based off what came before, and if you’re trying to say that what you’re doing is the most original thing ever, you’re just lying to yourself.”

“I fell in love with the narrative of rock’n’roll when I was a kid, so to ‘go west to record an album’ was something I really appreciated. When we were done recording the album in LA, we played a show at the Knitting Factory in Hollywood, and all the SideOneDummy guys were there, and it was the first time we played The ’59 Sound songs live. I remember a general feeling of excitement between all these people who were stoked on it. I’ve been in bands since I was 12 years old, and none of them ever got to where I wanted them to be. I was experienced enough by that point to understand if people were bullshitting me; I know the difference between a gracious head-nod and somebody who is genuinely excited. Early on I booked a lot of the shows, and I was pretty tapped into that scene, but up until then I felt like every show I booked, people were like, ‘Oh, we’re gonna hook up Benny’s band.’ With Gaslight it was more like, ‘Oh, Benny’s got a dope band we actually wanna listen to!’ I noticed straight off the bat that the reaction was different. It was a different sentiment – it felt more urgent and happy.

“I do think we knew we were on to something cool, and that it could be really special, but I don’t think we had any clue at that point what it actually took to be a full-time band day-to-day. We didn’t know that the bands that we loved, who were our heroes, all came home from tours and were still working, and doing jobs that they didn’t want to do. And we learned that the hard way. At first we were looking to sell five T-shirts at a show – that was the first goal. It was done in the punk rock way. I remember me and Brian saying, at some point, that we were going to get throat tattoos if we sold 10,000 records! Because in our estimations, if you sold 10,000 records once, you were probably good for the rest of your life.”

This article originally appeared in Kerrang! magazine in June 2018.