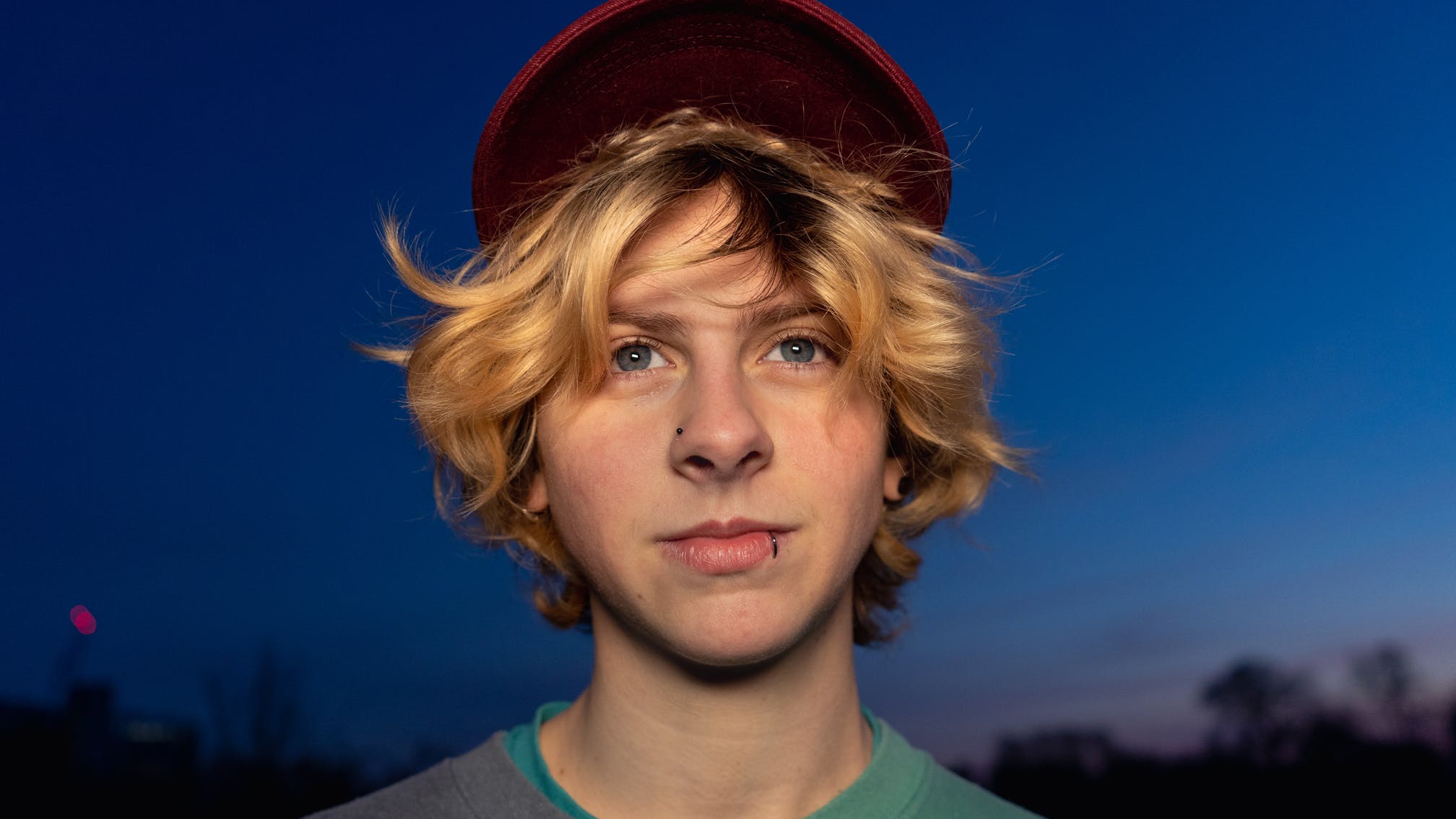 NOAHFINNCE, also known as Noah Adams, is exhausted after going to see Bring Me The Horizon's epic O2 Arena headline show. The band closed with Can You Feel My Heart?, now their most streamed track after it went viral on TikTok. "I was there thinking, ‘I bet this pisses off the old-school, OG Bring Me The Horizon fans, like, ‘Why are they closing with this fucking pop song?'" he laughs.

Fuelled by lockdown-induced nostalgia and a renewed sense of angst, pop-punk is having a renaissance, with a younger, more diverse fanbase discovering the sun-bleached genre through TikTok, YouTube and other social media hives of activity.

It's the most exciting the genre's been in a long time, and Noah is undoubtedly a part of that. Boasting 700,000 YouTube subscribers and a member of the LGBTQ+ community, he's in a new wave of artists bringing fresh and much-needed perspectives to pop-punk, while introducing the genre to legions of soon-to-be superfans.

As the world came to a pause during lockdown, things sped up for Noah: one week Hopeless Records said they were interested, and the next he was signed.

"I've had a lot of comments like, 'Oh can they stop signing TikTokers and YouTubers?'" he says, rolling his eyes. As artists like Halsey and Against The Current have shown, having a large social media following isn't at odds with being a legitimate musician, and in fact Noah suspects it may be a generational problem. "It's only really the older generations who have had issues, but then I've also had incredibly supportive comments from guys in their 60s who are like, 'This reminds me of the music I listened to when I grew up.'"

Noah may be a new artist with a social media following, but he's been involved in the scene for years, waiting outside venues in the cold to secure a good spot for bands like Pierce The Veil and Neck Deep. This love for the scene has always been evident in his content, from pop-punk flags which so often hang in the background while he talks to camera, to the covers of bands like Bring Me The Horizon, Nirvana and twenty one pilots which make up his early YouTube videos.

Now, he's onstage instead of queuing outside, and hordes of fans are waiting hours to get close to him. "That's what was so weird about going on tour – there were kids who were at barrier and kids who were trying to take the setlist, and it's like, 'That was me!'"

That hasn't been the only adjustment either, as although YouTube is undoubtedly a starting point for performing live, the move from screen to stage brought teething problems in the form of broken guitar strings, pedalboard set-ups, and no editing process. "Getting nice comments is nice, but saying something and seeing people laugh in real-time is so odd," he grins.

Although he hasn't had the most 'traditional' start to his career, STUFF FROM MY BRAIN, his debut release on Hopeless, is honest pop-punk, bursting at the seams with raucous riffs, distorted vocals and lyrics made for chanting and finger pointing. Lyrically, it's all sorts of personal, exploring themes of insecurity, otherness, and complacency. WEIRDOS is particularly striking, with lyrics about not fitting in and not caring: ‘We don't need their blessing / so fuck their acceptance.’

So, how does Noah feel about striking out in the (often hostile to change) rock world with a YouTube channel full of reaction videos?

"I was completely aware that this scene does have people in it who are massive gatekeepers; I knew there was going to be pushback," he admits. "I'm doing my own thing, I'm not trying to prove myself.”

This unconstrained authenticity is a hallmark of Noah’s music, explaining that EP title STUFF FROM MY BRAIN is quite literally what the record is, keeping it personal and most importantly real.

"More kids are being shown this kind of music, but are there people who will cash in on it doing well, purely because they know it's doing well and not because they give a shit," he sighs. "A lot of the music in this scene feels inauthentic in a way.”

As someone who grew up on pop-punk and has done his time in the scene, Noah is frustrated that the genre’s regeneration could lead to him being lumped in with some of the more fair-weather musicians. Yet, he concedes, "It's mostly positive, because if more people are listening to this type of music, then more people will enjoy the music I'm making."

Some may be cashing in, however this resurgence is also elevating a wider variety of musicians who are a more accurate reflection of the fans who listen to pop-punk. "In my head at least, the punk community and the people that listen to that kind of music that I situate myself with are all queer. But the bands they looked up to were cis white men – now there's this new generation of kids that are anything but that."

For Noah, then, it's imperative his music stays true to how he's really feeling, rather than pandering to people's ideas of what he should be singing about.

"Being trans is so minuscule in my head right now… I feel like I have a lot more to say than, 'Ooh I got my tits chopped off,'" he says with a laugh. "Nowadays the only time I ever think about being trans is when I come online and people are asking me questions about being trans.

"People have said my music is very me. The most important part to them, and to me I suppose, is to put as much of my personality in it as possible.”

Sat in front of huge Neck Deep and The Story So Far flags, it's clear that NOAHFINNCE loves pop-punk. Whether an artist finds their audience by relentlessly touring the country's grassroots venues or by building an engaging and personality-driven YouTube channel, ultimately it's the community and connection surrounding the music that matters.

"It's a bit of fun chaos," he smiles. And isn't that what pop-punk's all about?

NOAHFINNCE's new EP STUFF FROM MY BRAIN is out now via Hopeless Records.

Catch NOAHFINNCE on tour across the UK in January 2022.

NOAHFINNCE has shared an infectious new single and video, WORMS (In My Brain), and announced his rescheduled UK tour for later in the year…

Watch the video for Life's A Bit, by Hopeless Records' latest signing NOAHFINNCE.