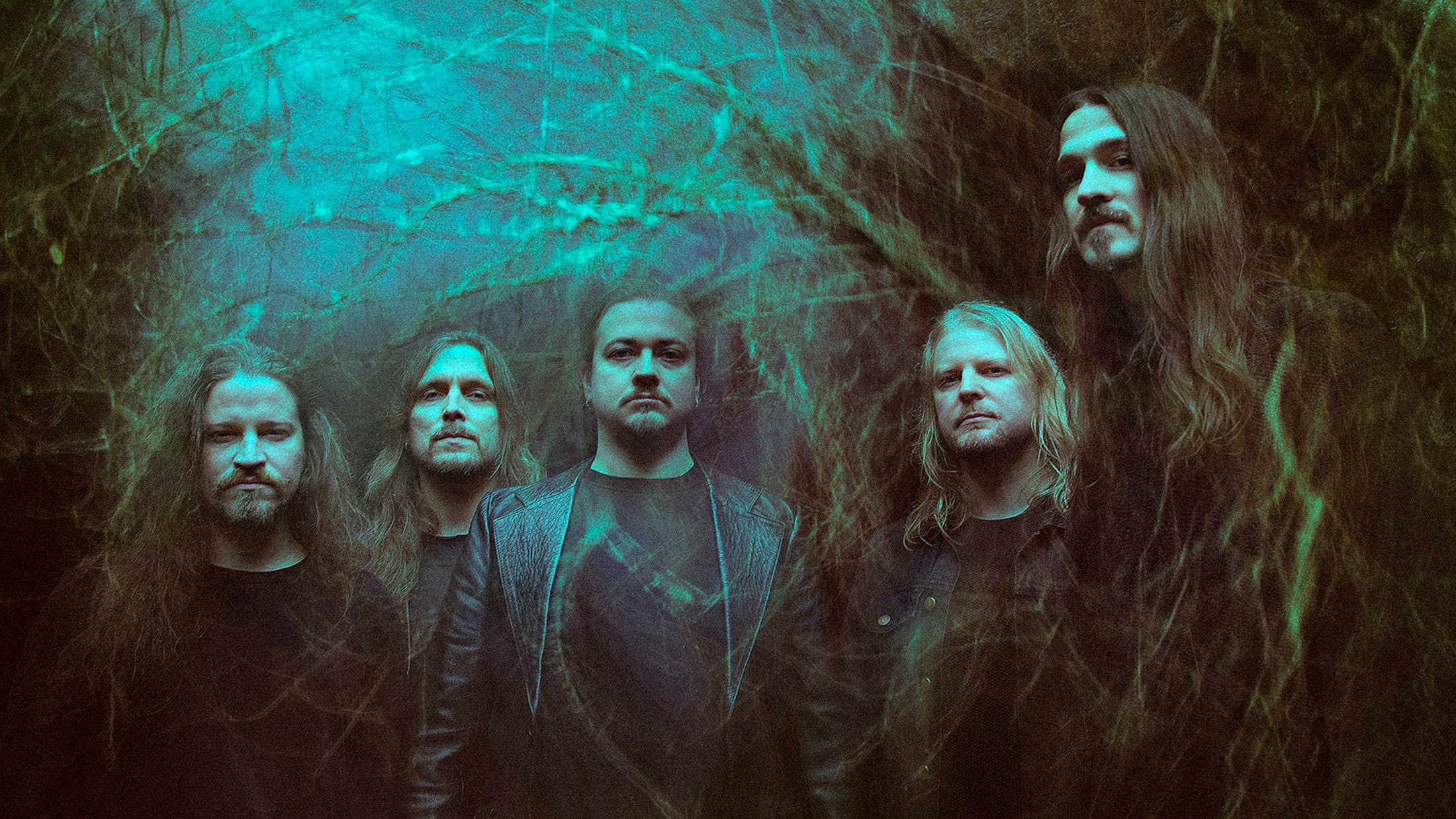 The world we’re living in is one gripped by fear and uncertainty. As the global pandemic continues its course and we remain confined to our homes, now, more than ever, we need to sink our psyches into the magical and transformative power of music. Oranssi Pazuzu’s new album Mestarin Kynsi has arrived at just the right time.

With ‘Oranssi’ translating to ‘orange’ in the band’s native Finnish, and Pazuzu the ancient Mesopotamian demon, the band name perfectly synopsises Oranssi Pazuzu’s self-described “hippy but sinister” sound, and they are releasing fifth album Mestarin Kynsi (‘The Master’s Claw’) this week. It’s an overwhelmingly expansive listen: hypnotic, multi-dimensional psychedelic black metal that could soundtrack a trippy psychological horror movie. Which is fitting when you learn of the dystopian concept bubbling within: a terrifying future where an evil dictator controls his subjects through mind control. As the band’s vocalist and guitarist Juho ‘Jun-His’ Vanhanen explains, Oranssi Pazuzu are all about exploration – but within yourself.

“To travel to dark territories inside your own mind was kind of the concept of Oranssi Pazuzu,” he explains to Kerrang!, looking back to when the band formed in 2007 with the aim of blending the ominous vibes of black metal with the soundscapes and ambience of proggy psychedelia. “They almost didn’t fit together,” he says of these disparate influences, “but we had an idea that it could bring the atmosphere and the psychedelic experience of music to a new level.”

Jun-His’ first experience with the consciousness-altering power of music happened when he was around four years old. As an anxious child, he had a vivid imagination, but found it very difficult to focus. It was through listening to music, specifically a story cassette for children, that he finally found that focus.

“The atmosphere was so big,” Jun-His remembers, “and I was able to channel my imagination somewhere. You’re concentrating so hard on the music, you don’t realise so much time has passed.”

As a teen, Jun-His’ interest in the all-consuming capabilities of music deepened through heavier sounds – most notably, fellow Finns and experimental rockers Circle, to whom his friend and future Oranssi bassist Toni ‘Ontto’ Hietamäki introduced him. “They were very meditative, on the electronic side, with repetitiveness and some psychedelic layers – Oranssi Pazuzu wouldn’t exist without them,” Jun-His stresses.

“I get that same sort of feeling through jamming with Oranssi Pazuzu,” he continues, “but even bigger, more focused, and it just feels super good. It’s similar to meditation, in a way. When it’s really successful, it feels like you have learned something about yourself.

“With your psyche, there are things in your head that are hard to access, and hard to see for yourself,” he adds. “I think music is a great way to look outside of your own thought patterns, and that gives the opportunity to maybe even start fixing some things. So that is definitely a goal for us: something we want to explore.”

Although many of the themes Oranssi Pazuzu play with on their albums can conjure up horrific visions – mind-control, dystopia, the occult – the overall effect they want to achieve is wholly positive for both themselves and the listener.

“Most of the good horror movies these days are more psychological rather than being about Satan or something – the really scary things are happening within your own mind,” Jun-His says. “If you face your enemies, meaning yourself and the fears you have, you learn how to take them on. Maybe when you shake hands with that darkness, it will dissolve. And at least for me, that can resolve into positive things. Even when you have a bad trip, it can be beneficial afterwards.”

Speaking of bad trips, have other ‘mind-altering substances’ played their part in the creation of Oranssi’s world?

“Some have, and some less,” he smiles of the band’s dabbles with psychedelics. “I think they can work well if you want to get out of your everyday thought-patterns. But it’s more of a shortcut. It’s not an answer to anything, but it can open your mind.”

Open-mindedness is a key facet of Oranssi Pazuzu’s vast creations. For all his talk of altering consciousness, Jun-His comes across as down-to-earth, practical, and above all, inquisitive. He tells us that there are “no laws or rules” in the Oranssi camp when it comes to creating music, he describes himself as a “curious atheist”, and he tries to be observant and think things through from different viewpoints when it comes to politics. And while Mestarin Kynsi’s terrifying themes – a totalitarian government, a religious cult, a controlling leader – could be seen as a scathing attack on the current state of politics or religion today, Jun-His explains that it is more about ruminating on the human condition.

“Throughout history, people have been controlled by strong characters,” he explains. “It tells a story of human beings, and how they want to belong to something. They want to follow something. So you could think that it has something to do with modern society, but it’s not a political album where we take a stance. It’s a story that’s happened many times before, and it’s more about observing.

“I have nothing against people having religious ideas, but I do think that organised religions are too simple and too dangerous an answer,” he continues on the album’s theological themes. “I think the control through them is very disturbing. But anything outside of that is more like philosophy, I think. When you talk to spiritual people, in the end, they are talking about the same things in different ways.”

READ THIS: If you burn a church, you've learned nothing from black metal

All of the band discuss the possible concepts and themes in their albums, and how to make them more meaningful, but the lyrics are written primarily by Ontto. And while they are all in Finnish, Jun-His believes that the ideas they encompass can be felt in the music.

“Even though we can speak English, we don’t understand the language as profoundly as Finnish, and I feel like if the lyrics were in English then maybe they would lose some of the intensity and the complex layers,” Jun-His explains. “If we understand [the lyrics] in a profound way and can develop the album through them, it will be really heard in the atmosphere.”

At the end of the day, it’s this atmosphere that comes first: “In general, the lyrics are multi-layered and dream-like,” he explains. “So with the atmosphere of the songs, which is the most important for us, the lyrics develop around that and work as a guide, to focus your attention towards certain things.”

Before Covid-19 trapped us all in our homes, the official unveiling of Mestarin Kynsi was going to happen at Roadburn Festival in the Netherlands this week, where the band would play the album in full. Sadly, the festival was cancelled, with plans to bring it back in 2021 with as much of this year’s line-up as possible. But choosing to present the album in such a way is a clear indication of how important the live performance is to Oranssi Pazuzu. Or, as Jun-His refers to it, the ‘ritual’.

“When we’re onstage, we have to be on our toes, and have excitement, or even fear, to make the atmosphere,” he explains. “If we succeed, that will spread.

“We just go for it and let the music take us. I don’t really know how it works,” he admits with a chuckle, “but it’s like a ritual because it’s really hypnotic, and also treads on some kind of rhythm pattern that is somehow growing around and then things will happen around that. Then we can get sucked into it, and at that point it almost feels like we are being guided.”

It’s a particularly intense experience for Jun-His, in doing his distinctive, demonic vocals. They add an extra terrifying layer to Oranssi’s sound.

“I like to do the vocals loud – through my whole body,” he explains. “It feels like you’re cleansing yourself in some way, vomiting something from yourself. It exits like some sort of vision.”

Their stage names add to the theatricality, but you won’t find the band dressing up in cloaks or costumes for their ritual – they want to blend in onstage. “That kind of creates the blank space for the audience’s minds to experience what’s coming from the stage. We’ve been experimenting with some visuals as well, but they need to be a certain kind. We don’t want to fill peoples’ senses with stuff – we want them to have space to experience things in their head.”

For Oranssi Pazuzu, with everything they do, that is the ultimate aim.

“I hope that music will be the kind of place you can explore, and just be quiet, without all that outside stimulation,” Jun-His says. “Unlike other consumable things that just occupy you for a while, it will be an experience again.”

Mestarin Kynsi is out April 17 via Nuclear Blast.