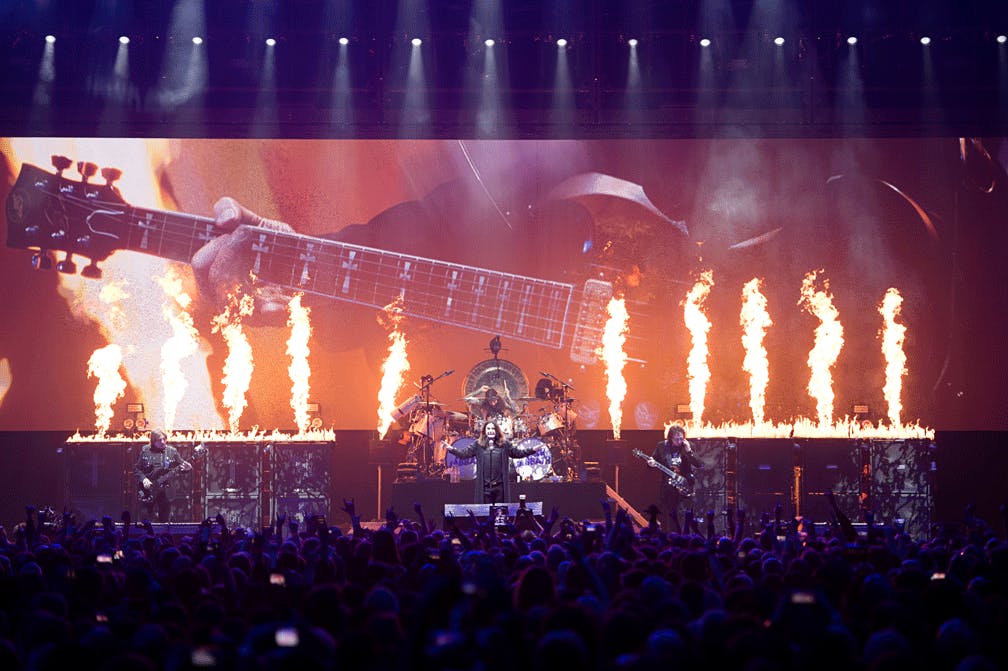 At the beginning of the year, Black Sabbath played their final UK tour before hanging up the crucifixes. Of course, their last hurrah came at a huge sold-out show in Birmingham, their home town.

To celebrate The End, the band will be hitting the big screen one last time with special showings of their last ever show. Black Sabbath: The End Of The End will hit cinemas on Thursday, September 28 across cinemas and theatres across the UK. On top of that, they've also released an exclusive vinyl bundle called The Ten Year War, which brings together their first 10 years of work in one big collectors box.

We caught up with the man himself, Ozzy Osbourne, to reminisce about that fateful night back in January.

You've got the DVD of the final Black Sabbath show coming out. How do you about that night looking back now?
Well, the weird thing about that last Sabbath gig was, we ended up where we started all those years ago – Birmingham. How can I say it? It was kind of emotional for me. I thought, ‘Fucking Hell, when we started this thing, we had no idea it was gonna be as successful as it is, or last as fucking long!’ We never thought that there’d be this fucking folk-hero thing about it. We were four lads from Birmingham who reached this great height…

The show itself was incredible. How did you feel after that final curtain came down?
The thing is, people forget that I was away from Sabbath for 35 years. Although, those years I was in them, for some reason – I dunno if it was because I was younger – but those years with Sabbath seemed to be a lot longer than the years I’ve been on my own! But it was a weird thing because… It’s over! And I still can’t really accept the fact that it’s never gonna happen anymore. When you start a band, of course you want success, but to last as long as we have? It’s mind blowing! I had to really tone myself down on the day, because I started to get a bit emotion up there, you know?

When you were talking during the gig, it did seem at points like it was getting to you...
It’s like burying a relative, you know? I remember thinking, ‘This is it. Fucking hell.’ But it’s cool that we filmed it, because that was a really special thing.

It was obviously important for you to end things in Birmingham, your home. Was was it like rolling into town that morning?
I remember I used to go past that building in a van. You’re asking me these questions, but I don’t have a fucking clue what the answer is! I’m just extremely grateful. And if it wasn’t for the fans, we wouldn’t be here. They’ve been so loyal to us, and so supportive. And without them, we wouldn’t have been able to do a farewell tour. We didn’t come from big, educated families, we were four fucking local kids who had it work out beyond their wildest dreams!

Do you think that's why the city is so proud of Black Sabbath? Because it could have been anyone from there?
I don’t know the answer to that question. If I was one of these guys who could go, ‘This is that, and that is the other,’ I’d fucking shit myself! But it’s cool. I don’t understand it, but it’s cool. Like, when a guy comes up to me with his son, and his son’s son – if my old man had gone, ‘Come on, we’re gonna go and see this guy I like,’ I’d have fucking hated it because it was what he liked! But Sabbath took on its own fucking thing that broke that, and I’m not disappointed by that <<at all>>, but I don’t know why people so young are still getting into us, all these years later. I think it’s fucking great, but I can’t explain why. I played a show the other day at some fucking festival somewhere, and the audience are from, like, 65, 70, to fucking 14 and even younger! I felt like a heavy metal Bing Crosby or something! I don’t know how to handle it! A kid says, ‘My favourite song’s Iron Man,’ but the kid’s about fucking five, man! Do you know who Garry Bushell is?

There's also some really cool video of you guys rehearsing on there. How did that come about?
We just got together for a jam and we filmed it. But it wasn’t like a special thing for it, it’s just us knocking about doing The Wizard and a bit of Changes. I just did what they asked me to, you know? But I think that’s cool to have the rehearsal stuff on there, because it shows us having fun and being quite relaxed.  At the end of the day, though, it’s fucking over! It’s like someone dying of old age. I can’t really put into words what it felt like. We all – me, Geezer and Tony – we all felt an emotional bond, you know? We do argue, we fall out, we make up, but we kept on going, one way or another.

Was it cool that you could bring the curtain down on your own terms?
The big problem was, the big thing was, it didn’t work for Bill, you know? I wish it could have done. I feel sad about that, but hey, we didn’t have time to fucking wait around, you know?

You went pretty much straight into doing your own shows after – did that make it easier, having the next thing to do already in the diary?
Like I say, I was out of Sabbath and on my own for 35 years. It was like an old girlfriend for me. You go, ‘Alright, I’ve seen her’. It was nearly a perfect moment. If Bill Ward had been there, it would have been. But I’m not saying too much about that, because he’ll see it, and then go getting on the computer – you know what he’s like. Next.

As soon as the tour was done, rumours started that there would be more. Is that going to happen?
No. Not with me. I’m done. I fell into that trap myself a few years ago when I said I’d retire. Retire from fucking what? It doesn’t mean to say I’m retiring – I’m not, I’ve been doing gigs since Black Sabbath – but Black Sabbath as an entity is no more. If they ask me to do one more… In actual fact, the big mistake we made was not doing it next year, when it’ll be 50 years since we all got together! But if someone asks if I’ll do a one-off show – no. I’m done.

Come on, man, it'd be awesome!
No. Nonono. It’s gone. When I retired before, I came back and did the Retirement Sucks Tour [in 1995-6], but it doesn’t work twice. If that’s the case, we should have just sat down and gone, ‘This is 49 years, we should stretch it out to the fiftieth.’ But it’d go on forever, and people would get pissed off, you know?!

Black Sabbath: The End Of The End hits cinemas on Thursday, September 28 and you can book tickets by visiting blacksabbathfilmtickets.com.