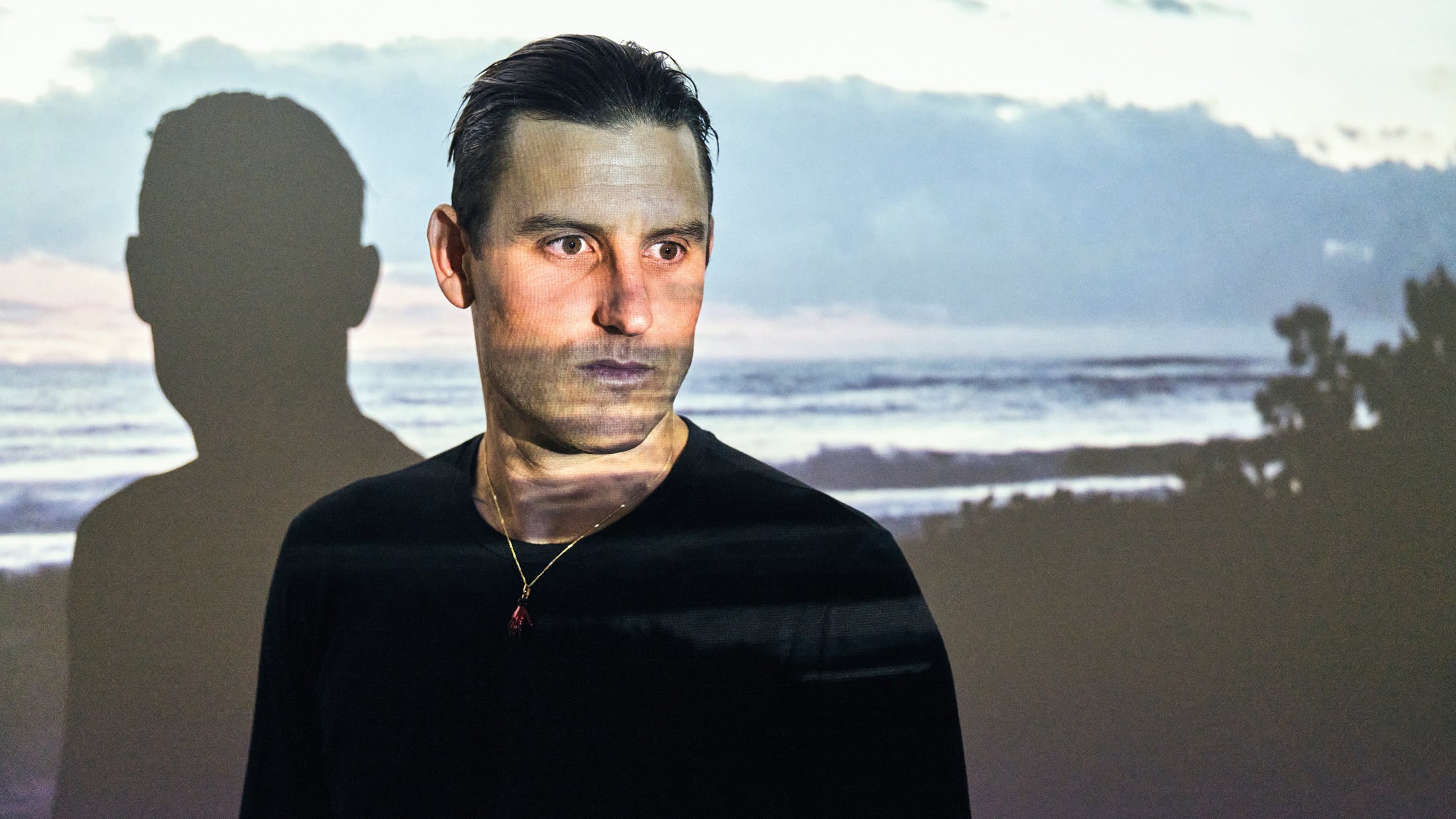 "When we played Bottom Feeder, the whole fucking place jumped,” smiles Winston McCall. “I was watching the relay towers – because the sound is delayed going back, everyone jumps at different times – and it was these waves going all the way to the horizon. I’m standing there thinking, ‘What are we doing?!’ Realising that you’re connecting with that many people is hard to wrap your head around – being the catalyst for that community.”

Sat in the London office of Kerrang!, fighting the jetlag courtesy of his flight from Australia, the Parkway Drive frontman is reliving what he believes to be the greatest show of his life: the band’s epic headline set at Wacken festival in Germany last year – the mecca for all things heavy.

“It’s so insane,” he continues, with the world’s widest grin still stretched out across his face. “It’s this incredibly personal expression of literally a handful of people onstage, doing this thing that originated in a garage, [playing] on a stage the size of a fucking skyscraper.

“You stop being able to see faces. It’s like watching a TV screen, but there’s no reception, just dots of colour. They’re singing your words back to you, except they speak German and you speak English, but they’re still singing in English because it means something to them. The sensory stimulation from that is indescribable.”

A crowd of over 80,000 watched Parkway Drive close Wacken. Having only played the festival once before back in 2016, three years later they had graduated to the top of the bill.

“It’s hard not to feel joy when you look down and there’s a thousand people standing in a row, smiling at you. In that moment you break character and just grin, before going back to screaming your guts out (laughs).”

The laughter and elation that last summer’s Reverence tour brought to Parkway is far removed from the emotions and experiences that fed into it. Sonically, it followed previous album Ire’s lead in threading bombastic heavy metal into their crunching hardcore template, but conceptually it was much darker. It was a vehicle for Winston to channel pain, tackling a wide variety of heavy subject matter, from child abuse in the Catholic church, toxic fame and police brutality, to the devastating personal loss of his dog Monty, and his good friend Tom Searle from Architects.

And yet, through all of the hardship and heartache, Reverence catapulted the Byron Bay bruisers into the largest venues they’ve ever played, setting themselves up as not just one of the biggest heavy bands going today, but one of the most important. In the space of a single record they went from headlining London’s Brixton O2 Academy (then the pinnacle of their career) to a summer run headlining festivals, from Spain’s Resurrection to the UK’s own Bloodstock Open Air. Not bad for a pack of scrappy underdogs.

READ THIS: The history of Parkway Drive in pictures

That term has long been synonymous with Parkway Drive, ever since the song Wild Eyes from 2012 album Atlas featured the immortal line, ‘Viva the underdogs’. Soon it became a war cry, and now it’s the title of their new documentary movie. The feature-length doc follows the band on their landmark summer trek across Europe to their climax at Wacken – from initial planning meetings about ambitious pyrotechnics to its eventual execution – glued together with candid footage of what it’s really like within the touring machine.

“Over the past couple of years people are flocking to see movies about the rock industry – Bohemian Rhapsody, Rocketman, The Dirt – from an era that predates the digital revolution,” says Winston. “While there might be a bunch of fans from back then who can relate to that, we wanted to put out something that would make people go, ‘Oh, this is what it’s like being in a band.’

“It might not be a story of private jets, piles of coke and spiralling into madness, but it’s real.”

Viva The Underdogs is Parkway’s third documentary, following on from 2012’s Home Is For The Heartless. A lot has changed in that time, however, most noticeably the sheer scale of their operation these days.

“You rock up to the first production meeting for the tour with the same five guys that you shared vans and scrounged for food with back in the day, and then you look around and 48 other people are now involved, and you think, ‘Fuck! This is big.’”

Frankly, it’s staggering that Parkway have even made it this far. Not through lack of talent or ambition, but circumstance and adversity. When the band started, their hometown had the highest unemployment rate in all of Australia. Back then, Winston was flipping burgers in a café, Ben (Gordon, drums) and Jia (O’Connor, bass) were washing dishes in a pizza shop, while Jeff (Ling, guitar) worked in a video store and Luke (Kilpatrick, guitar) was growing wheatgrass for a juice company.

They had to make a choice. Nobody was going to keep those day jobs on hold for them while they toured, so in order to live they’d have to gig as much as humanly possible.

“We had nothing and we came from nothing,” says Winston bluntly. “I’m not gonna have a career in my town, it’s not like there’s industry there, and none of us wanted to move to a big city. So we figured, ‘Why not try this thing and make it work? It brings us joy.’”

Show after show, year after year, Parkway Drive slaved away on the Australian live circuit, supporting everyone from I Killed The Prom Queen to Alexisonfire. Three years in, they had managed to make a living from gigging, and became the most popular heavy band the country had produced since AC/DC. But universal love wasn’t forthcoming right away.

“We were punk kids who started a hardcore scene in our tiny town and played metal music,” says Winston, reminiscing about the drive and innocence of their youth. “The hardcore people said we weren’t hardcore ‘cause we played metal, and the metalheads said we weren’t metal ‘cause we were into hardcore. So we did whatever the fuck we wanted!”

Inevitably, broader horizons were calling. The final show Parkway played in Oz before leaving for Europe for the first time was sold out to 1,200 people, far removed from initial experiences across the ocean.

“When we went overseas it was like, ‘Who are these Australians? And what the fuck is this?’” remembers Winston, illustrating the kind of animosity they first faced. “We went back to square one. We knew there was no reason it wouldn’t translate eventually. So we banked everything on doing what we do best and played every single show like it was our last.”

They were effectively making their way around the continent like gap year students too, often camping out at night in testing conditions.

“I’m glad I’m alive,” Winston laughs. “I got really sick and caught pneumonia on those first tours, and I didn’t even realise until I got home.”

There’s a scene in Viva The Underdogs of a young Parkway sleeping rough one night in a shipwreck, which might as well be a tetanus factory. “They were hard tours,” Winston admits, “but still so much fucking fun. There’s emotional stuff that goes along with it though – that’s the hard stuff to look back on.”

Schlepping around Europe for five months took its toll on the frontman. In 2006, social media was still in its infancy, and while surviving on a pittance there was no way he was going to pay for internet access, or make expensive mobile calls overseas. He and his now-wife had to communicate solely through quick phonebooth chats and postcards.

“It was fucking hard man, but at least I could enjoy the adventure, For her it was just horrible. I’d never put her through that ever again.”

Thankfully, Winston shouldn’t have to. His band have been on a steady ascent since their debut album, but it was Ire that saw them rise to arena and festival headliner status. No-one can accuse the Aussies of having anything handed to them – they exist entirely on their own terms, independently and self-managed.

“No-one opens doors for us, we have to kick them in ourselves,” says Winston boldly. “The bigger you get, the heavier those doors are to kick in.”

Winston asserts that, without a “corporate funded record label” or “hype management team” involving viral marketing strategies, it’s almost unheard of to grow to festival headliner status. Parkway Drive don’t have any such support behind them. They have only their self-belief.

“We’ve never felt like we fit in,” Winston admits. “Now, we’re happy to own that, but it’s a daunting feeling when you rock up as a festival headliner and you’re the only band in flip-flops and board shorts. You realise that you’re different – but there’s many points of difference. We’ve always done things our own way.”

That difference, and the band’s unerring confidence, has paid off. Before the global pandemic hit, they were all set to play their biggest ever UK headline show at Wembley arena this month, before spending time away from the flamethrowers and molotov cocktails. That show will now happen later this year in November. This unexpected chance to breathe, reflect and plot out what comes next might just be a gift.

“Sonically, we don’t wanna go backwards,” Winston promises. “There’ve been so many ideas that we’ve had in the past that we’ve not been able to explore, but this will be the record where we can do anything we want, and we’re committed to doing that. It feels like our tank of desire and imagination is more full now than at any other point in the band’s existence.”

Yet somehow, with the world at their feet, countless fans around the globe, and already planning what might well be the most ambitious metalcore album of all time, Winston still thinks of Parkway as underdogs.

“I can understand people thinking, ‘Oh they’ve made it, they’ve won,’ or whatever, but whenever we win, it’s like, we’ve managed to get through one door. You can hang in that room if you want, but we tend to look towards the next door. So we put some bigger boots on and kick that shit down!”

Viva The Underdogs is available to stream now.