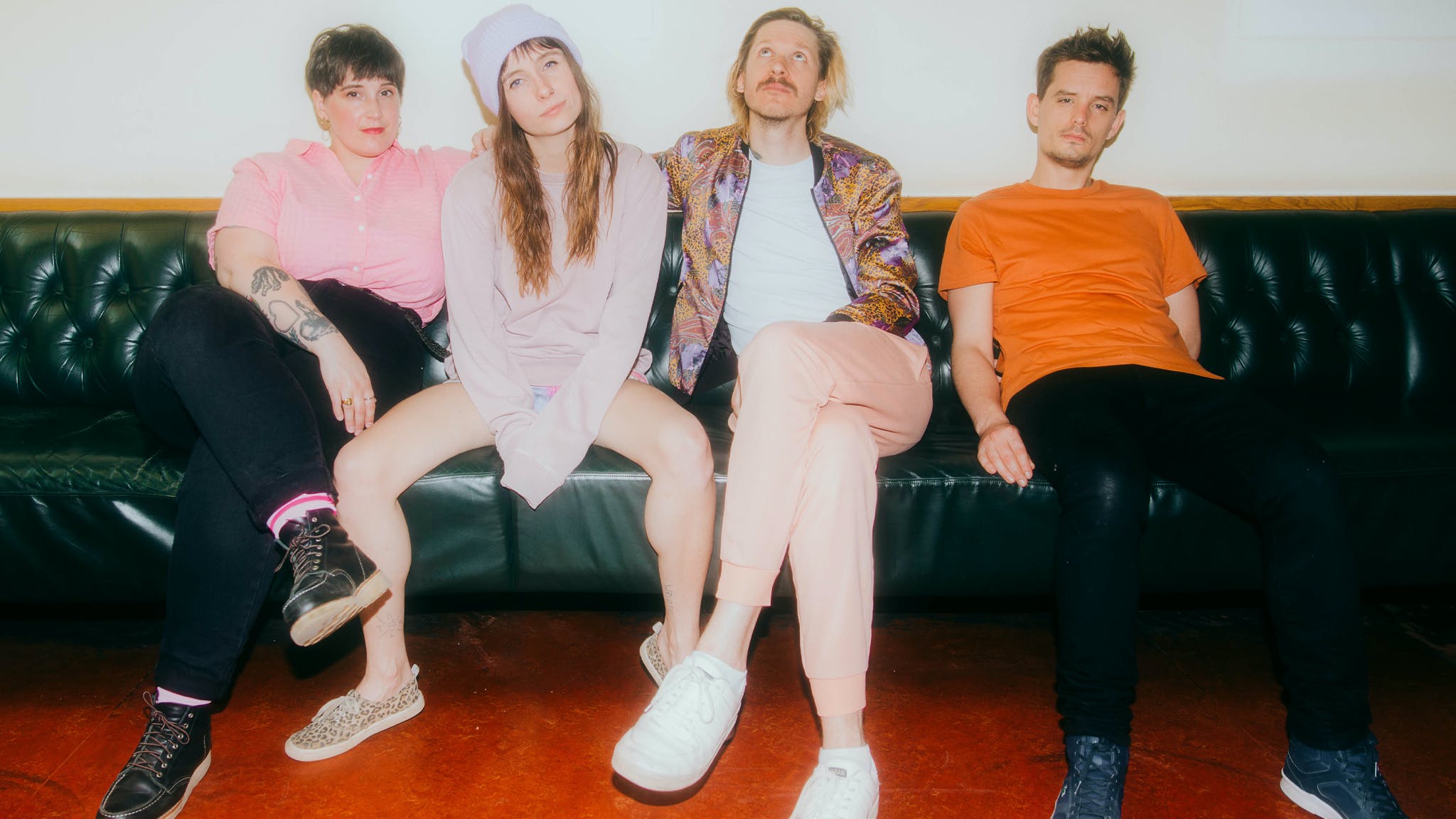 “I had an abortion!”

Those were the words Petrol Girls vocalist Ren Aldridge started yelling when she saw pro-life protesters in front of an abortion clinic in Austria. “I had an abortion!” she shouted. “And I’m not sorry!”

Soon after this encounter, Ren began participating in protests in Graz, Austria, where she now lives.

“I thought a lot about that interaction and how it was [a] very serious interaction, and I had this real desire to make it ridiculous and theatrical,” she explains today.

Ren talked to Petrol Girls guitarist Joe York about channelling the experience into a song. Originally, the track was supposed to be built around the lyric, ‘I had an abortion and I’m not sorry,’ before Joe suggested another: ‘Baby, I had an abortion.’

“For 10 minutes, I was just laughing because I was like, ‘Yes! This is so good,’” Ren recalls. “And so I really feel like that’s at the heart of the way we started thinking about stuff.”

Petrol Girls have always produced politically-conscious punk, and their third album Baby is no different. Unflinchingly, it tackles important social issues including femicide, police violence and misogyny. But this time, Ren wanted to have more fun with her expression – starting with the lyrics for that bold lead single. The proceeds from the track have gone to Abortion Without Borders, but even with this seriousness, the lyrics are tongue-in-cheek: ‘I’m a goddamn should-be mother / Got a womb so that’s my purpose / I’m a goddamn incubator / But baby I’ll see you later.’

“I wanted to make them as stupid as possible,” Ren explains. “They’re not smart lyrics. They’re really silly and on the nose. The ‘shame, shame, shame’ is a Game Of Thrones reference! The stupidity of them highlights the stupidity of that pro-life view.

“I believe that taking the piss is something that’s very politically powerful,” she continues. “You can bring powerful things down with humour in a way that is easier for people to get on board with, than if you come at it from this holier-than-thou position – which is something I’ve done in the past.”

Taking a less self-serious approach was effective for getting the band’s message across. “I really believe that punk’s political power lies in its irreverence,” Ren adds. It also gave her a chance to express her personality more fully in her work.

“I can be very sincere about things that I really care about, for sure,” she nods. “But I can also be a complete idiot and very silly. I’m the person in the van that will fart right as we’re entering a tunnel, and everyone has to put the windows up.”

The decision to bring more humour and playfulness to Petrol Girls’ music was also informed by Ren’s struggle with her mental health. The music industry, along with its instability and financial precarity (especially during the pandemic), can take its toll on any artist, but for Ren, there were more layers to it.

“If you add on top of that being a political musician, outspoken on these issues – and being a woman who’s an outspoken feminist – people start expecting and sometimes demanding quite a lot of you,” she admits. “I think it’s a really gendered thing.”

This pressure contributed to Ren’s mental health struggles and depression, which were especially severe at the beginning of the writing process for Baby. Fortunately, finding the treatment she needed helped.

“I want to be really careful in making it clear that this record for me wouldn’t have been able to happen if I didn’t get on the right medication,” she says. “People say that antidepressants stifle your creativity, but actually, I needed to be on antidepressants to be able to do this record. I don’t think I could have done it without them.”

Ren, Joe and drummer Zock Astpai wrote their parts in Austria while bassist Robin Gatt wrote separately, before the band collectively headed to Middle Farm Studios in Devon to record the album together. There, producer Peter Miles suggested they record to tape, a process which makes editing and fixing mistakes harder. Though initially daunting, it ended up suiting the project.

“I think that really lends itself to what we were trying to do with the record and this kind of stripped-back, playful vibe,” Ren grins, “because it’s full of mistakes!”

This, though, is a good thing, and the singer embraces the messiness of it all. “Imperfection: love it, want more of it,” Ren enthuses. “Holding ourselves and each other to be perfect all the time, that stagnates us. I think that stops us moving and growing. I love that this album is imperfect. It’s very honest.”

That ethos of imperfection also comes through in the artwork, which is a section of a piece of art Ren painted herself.

“I chose it so you could see the top of the canvas and the stitching of the canvas,” she explains. “So, the canvas is there and then the paint is on top of it, and that for me somehow feels like recording to tape. The mechanics of it are present in the image or the recording.”

While in the studio, Ren brought along her then-six-month-old puppy, who would wake up early each morning, with the consequence that she saw the sunrise every day. The colour of the sky during those early-morning outings played a big role in the imagery.

“I had a really, really strong feeling about the colours and it started with peach,” she says. Only later did Ren connect it to the lyric ‘promise of peach skies’ on album closer Bones.

Ren was also inspired by a Sisters Uncut poster depicting red and orange flowers, as well as those from Sarah Everard’s vigil. The painting as a whole includes flowers, but they didn’t make it into the section Ren ultimately chose for the album artwork. “It still really informed the colours that I was choosing,” she says, “and it being these quite femme colours, but also angry and strong colours.”

Baby has its fair share of anger and frustration, but Petrol Girls do a great job of mixing it up. The likes of Unsettle and Bones are driven by complex, compelling melodies while other tracks are constructed to deliberately highlight chanted lyrics. The songs were informed by protest, and were written with demonstrations in mind.

Ren is involved with a grassroots feminist group in Graz, who arrange demonstrations surrounding femicide. It’s from there here the defiant Fight For Our Lives draws its inspiration. The lyrics – ‘We’re on the streets again / Another bed sheet painted with the blood of a sister / The hands of violent men / The hands of a society that doesn’t believe her’ – describe actual scenes of the demonstrations Ren participates in, where activists paint the names of murdered women on bed sheets and carry them through the streets.

The single features feminist activist Janey Starling. It was released via Bandcamp on International Women’s Day this year (March 8), with all proceeds going to Janey’s campaign Level Up, who are currently working on creating a trans-inclusive femicide database.

“I love her so much,” Ren smiles. “I respect her so much as an activist, and she’s also an incredible vocalist and performer. I think she’s one of those quite rare people in political music communities that is truly an activist and is doing some real shit. The work that she’s done on gender-based violence is immense.”

When it came to recording, Ren instructed Janey to deliver her lines on the song as if she were speaking at a protest.

“The verse which Janey Starling performs is really deliberately written as a kind of manifesto,” Ren reveals. The song references Janey’s Dignity For Dead Women campaign, which introduced media guidelines for reporting domestic violence deaths, in the lines, ‘We demand that the media stops perpetuating the narratives that kill us and robbing dead women of dignity.’

Janey also co-wrote Violent By Design, a song that deals with the intersection of police violence and gender-based violence. Murderer Wayne Couzens’ trial took place during Petrol Girls’ first week in the studio, so Ren had Sarah Everard in mind, but also Bibaa Henry, Nicole Smallman and Sarah Reed. So too was she thinking about Black Lives Matter, and the police threat to certain communities.

“The first verse is more focused on police abolition and it being like, ‘Look, we’re not treated badly by the police, generally, compared to other marginalised communities, and when we call the police on those communities, that is an exercise in white supremacy,’” Ren explains. “The second verse is about how they are also fucking useless with regards to sexual violence. Like, completely fucking useless…”

Similarly, its sound is raucous industrial-punk, with scream-sung verses. The intensity is then broken up by the sing-song delivery of, ‘There to make us safe / Keep us in our place / Criminals must pay / So do what they say.’ Then there’s the sarcastic lines, ‘You think they make us safe? / Are they a friendly face? / Keep us all in our place.’ Those changes in tone allow the band to use different techniques to drive their point home.

“I feel like it’s the sort of thing that chips away at you slowly rather than it just being like, ‘Fuck the police!’ Because then you’re either like, ‘Yeah!’ or ‘No!’ and that’s the end of it,” Ren says.

Other songs on the album take a wide-lens approach to sexism. Sick & Tired talks about the side-effects of misogyny, while One Or The Other looks at the narrow ways society defines people and gender. On the latter, Ren pushes back against rhetoric that deals in absolutes: ‘He’s a villain or he’s your brother / Can’t be a victim and an abuser,’ she sings, refusing to reduce complex issues down to two opposing options.

It’s this that makes Ren and Petrol Girls’ message feel more positive, more inclusive, more about telling us what they’re for, rather than simply what they’re against.

“My politics are really rooted in: patriarchy is a system, capitalism is a system, white supremacy is a system,” she says. “It’s about, ‘How do we fight these things on a systemic level, and not boil it down to some kind of fairytale shit about good guys and bad guys?’ We’re all capable of making mistakes and learning from them. I’m definitely not perfect; I definitely have a lot to learn.”

“I also need to have fun and be silly as well.”

Baby is out now via Hassle. This article was originally printed in the May 2022 issue of Kerrang!.