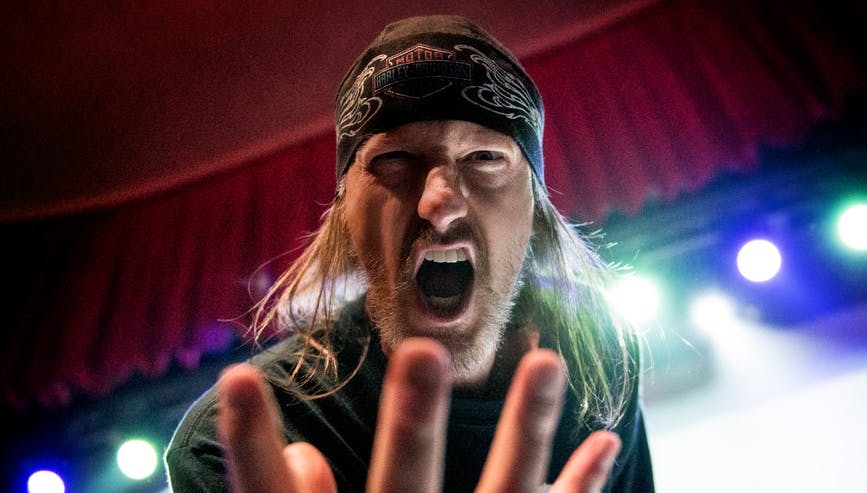 Extreme metal fans around the world were crushed last month to hear that Bruce Corbitt, vocalist of seminal underground acts Rigor Mortis and Warbeast, passed away from esophageal cancer at the age of 56. On top of his musical legacy within death metal, Bruce was known as being a solid dude and a diehard metal fan, and his battle with disease was long and difficult, so his passing felt especially terrible.

Now, it's been announced that a public memorial to Bruce will be held Saturday, March 9th, at the Ridglea Theater in Forth Worth, Texas. The memorial will feature live performances, DJ sets, and more.

From the description on the public memorial's event page on Facebook, "On Saturday March 9th 2019, we will come together to celebrate and remember a great man who touched the hearts of so many people in this world. We will show our love and support for his wife Jeanna, his daughter Chyna, his stepson Lyric, and Bruce’s amazing mother Glenda. We will celebrate in the most beautiful way possible by honoring Bruce’s final wishes to make his memorial just the way he wanted it."

Doors for the even are at 5:30pm, with the memorial itself starting at 7:00pm. There'll be live performances by Iron Jaw and Rabid Flesh Eaters, as requested by Bruce, as well as eulogies by his friends and family. Fans interested in knowing more about the show can check out the event page here.

This is not the first tribute paid to Corbitt since his death. Former Pantera frontman Phil Anselmo, head of Warbeast's label Housecore Records, recently paid homage to Corbitt at a live performance of his band, Philip H. Anselmo & The Illegals.

A boxed set surrounding Bruce's work in Warbeast and his final performance are also in the works.

Our hearts go out to Bruce's friends, family, and bandmates during this difficult time.

Bruce Corbitt Of Rigor Mortis And Warbeast Dead At 56

The singer lost his battle with esophageal cancer.