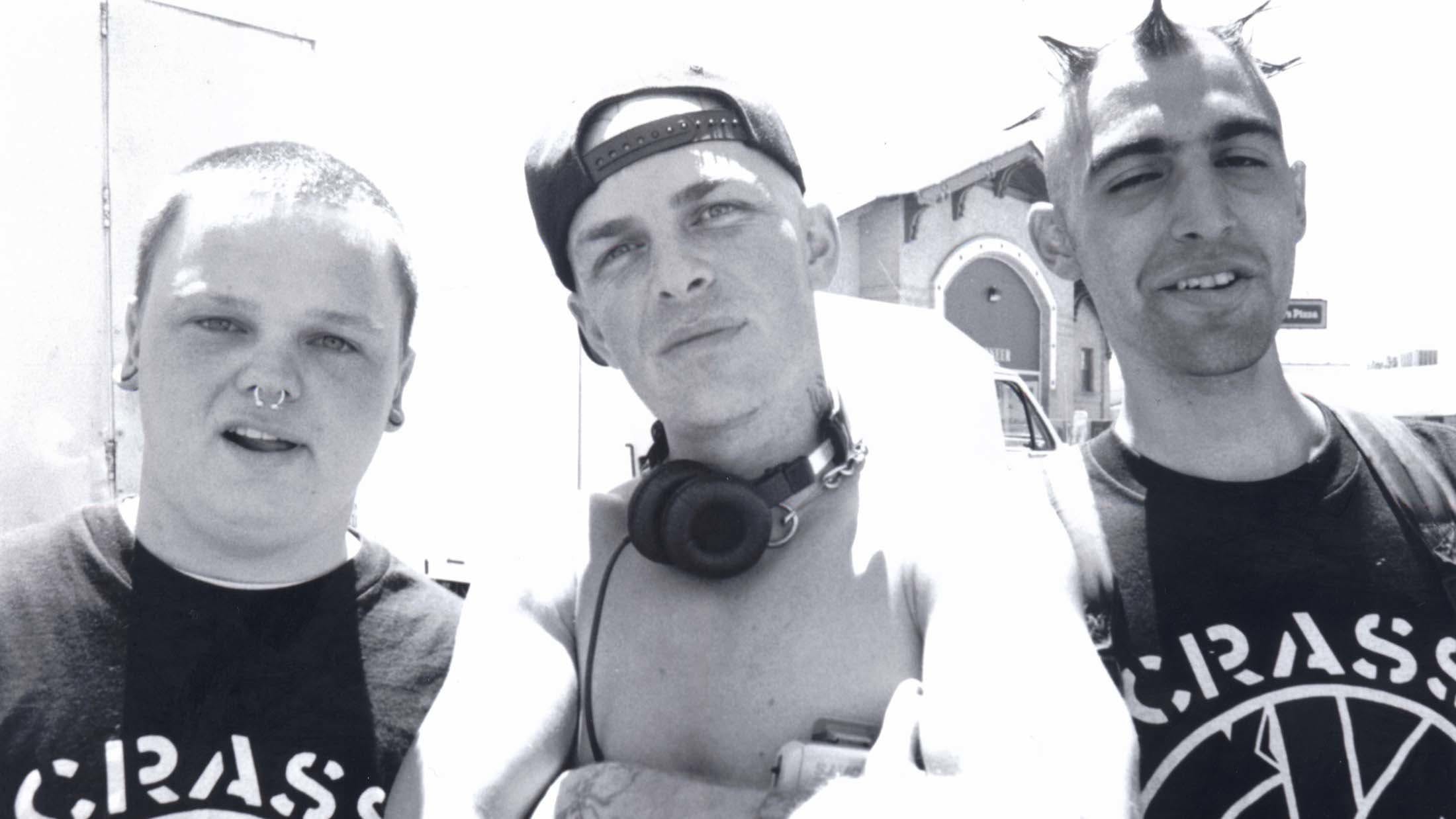 Buddyhead was a music website which launched in the summer of 1998 by Travis Keller.

Its outspoken reviews and gossip column rubbed up many stars the wrong way and the website received cease-and-desist letters from the likes of Courtney Love, Fred Durst and Axl Rose.

One prank saw Keller and a friend break into the Limp Bizkit frontman’s office at Interscope Records, where they stole his caps and auctioned them off for charity.

Keller has now published a 112-page photo book, collecting images from his time on the road with The Icarus Line, Nine Inch Nails and more. We asked him to choose some of his favourite images from the book and share the memories they hold for him.

The Icarus Line
Travis Keller: “The Icarus Line were my gang. I wasn’t in the band but I put out their first album Mono on Buddyhead. I went pretty much everywhere with them. We started out as teenagers who shared a common love of music and the lack of anything else to do with our lives. For a bunch of nobodies, we sure made shit happen. A group of underground punk rockers from Los Angeles that went international and were labeled infamous by glossy music magazines. We kept it real, we slept on floors, promoted shows, pressed records, and booked tours on landlines that didn’t belong to us. We pushed numerous vans past the brink of destruction, had a blog before they called them blogs, got signed, got dropped, signed again, spray painted major label tour buses, talked shit and laughed our asses off. We toured with shitty bands and some of our heroes. We went on the lash, fired more drummers than Spinal Tap, broke lots of gear, got punched in the face, made friends and made a lot of enemies. We never compromised and never gave up. We had to do what hadn’t killed us yet. It was always us versus the world, so we stayed tight. And I took photos the whole time, my camera was what got me everywhere. But not all of us are still around. We lost our homie Alvin DeGuzman (right) a year ago to cancer. The dude was a straight G, and this book is dedicated to him. Joe [Cardamone, The Icarus Line vocalist] and I are still making shit together as American Primitive. Make sure to check out his new mixtape Holy War and the accompanying videos and films we’ve created. The saga continues. Gotta keep making shit."

At The Drive-In
“This was taken on July 23, 2000. Cedric and Omar, backstage pre-show at The Roxy [in Los Angeles]. At The Drive-In were opening up a secret show for Rage Against The Machine on the Battle Of Los Angeles tour. I had seen these dudes play to 9 people in a record store a few years earlier and here they were opening for one of the biggest rock bands from LA. It was an exciting time and it felt like anything was possible."

Nine Inch Nails
“I toured with Nine Inch Nails on and off for three years. One of my favourite subjects to shoot were photos of their fans. They’re aliens. I was just kind of in awe of how excited they would get. Jealous maybe, because I don’t think I’ve ever been that excited about anything ever.”

Ink & Dagger
“This was 1998, maybe my third time out on tour. We were out for like two weeks– up the west coast with a couple shows across the border in British Columbia. The Icarus Line (plus me), Bluebird and Ink & Dagger. This tour was rough and pretty much everything that could go wrong, did. It was fucked but we were still so young that we barely noticed. We really looked up to Ink & Dagger, so the whole thing felt pretty big time no matter how shitty it got. Despite having expected Ink & Dagger to draw more (based on what they’d told us), we were still kinda of in awe of them. Or at least I was – especially Sean McCabe (right). He had that extra something, that star quality for lack of a better term. He was just larger-than-life. When he entered a room people took notice, and it wasn’t because he was the best looking guy. I was always kinda surprised Sean liked me. I really felt honoured to be his friend and it really gave me a lot of confidence. I learned a lot from him, just about life and how to act. In fact it’s safe to say that his attitude, and overall demeanour heavily influenced the tone of what I would write on Buddyhead in the early days. When he died, it hit me hard. I still miss him. I took this post-show photo of Sean and Joshua Brown outside of 924 Gilman Street in Berkley. Playing Gilman Street was definitely one of the highlights. I don’t think anyone played very well but just being there was totally like scratching one off the bucket list. Oh, and Jello Biafra from Dead Kennedys was there and bought a copy of everything from every band’s merch table. Punk."

Rancid’s Tim Armstrong
“This was the summer of 1997 and I hitched a ride with several bands on the Warped Tour. I was 20 and just read On The Road by Jack Kerouac and romanticised the whole thing. I bounced from different bands’ buses and somewhere in the middle I spent a week on Rancid’s bus. Tim Armstrong and I bonded over our fandom for Jawbreaker and I loaned him the Jets To Brazil demo I had on cassette to dub. This photo was taken as we walked through the crowd in Utah. Tim was listening to the demo on his headphones and kids were coming up and taking photos with him. I remember him being in a really good mood and thinking this whole situation was hilarious. Later on, the things we said on Buddyhead would make it harder for us to be friends. Little known fact, Tim also released the first seven-inch by The Icarus Line on his label Hellcat.”

The Strokes' bus – $uckin dick$
“This was 2002, I think. I was out on tour with The Icarus Line who were opening up for Cave In on a two-month, cross-country trek. Cave In had just signed to RCA records, so when we got to North Carolina towards the end of the tour, they skipped out on the show with The Icarus line and played across town opening for their label mates, The Strokes. After our show, we ended up going over to check out The Strokes. Joe and I got bored a couple of songs in and ended up going out to the parking lot and spray painting ‘$uckin’ Dick$’ on the side of their tour bus. It wasn’t planned, it just felt right. I flew to New York the next day to hang out with Gideon Yago and ended up drinking with The Strokes on their tab at bar called 2A. I’m pretty sure they didn’t know who had spray painted their bus until a week later when Spin Magazine ran these photos. We never got a bill. Ah, to be young and shitty.”

Elliott Smith
“In the summer of 1999, I talked my friend Marko Shafer into driving 1,000 miles with me from Los Angeles to Olympia, WA at the last minute to attend a DIY festival he knew little to nothing about. It was called Yo Yo A Go Go and I was excited to see The Make Up, Thrones, Sleater-Kinney, and Dead Moon but the main attraction was, without a doubt, Elliott Smith. When we arrived at The Capitol Theater, we learned that the show was sold out. Determined to get in despite the odds, I walked down the side alley of the theatre and saw Elliott Smith standing by the back door, I shit you not. He was wearing a trucker hat that said WHO’S THE BOSS? and he was pulling from a cigarette just as you’d expect him to be. I explained to him our situation, to which he replied something along the lines of, ‘Well I’ve got two guest passes and no friends, wanna be my friend?’ And like that, he finished his smoke and led us through the back door. We walked past several bands who were setting up their gear, to which Elliott asked each of them, ‘Who’s the boss?’ – as if on cue, they shot back, ‘You are Elliott!’. Elliott then took us to the side of the stage where I sat for the entirety of his performance and shot these photos. We could hear a fuckin’ pin drop in that sold out theatre of 1500 people. He had us all hanging on his every word; I was in awe. Afterwards, we went to a bar with Elliott and chatted. I think it was my second time in a bar ever. He was beyond sweet, seemed generally interested in what I had to say. He was funny, intelligent and charming. After a few beers it got a little darker, but I was so young I didn’t fully comprehend it at the time. I love these photos. I love Elliott and always hold a small place in my heart for him. He was one of the realest people I ever met and I feel lucky to have gotten a chance to be around him while he was here.”

Travis Keller's book Past Lives is available online from this location.