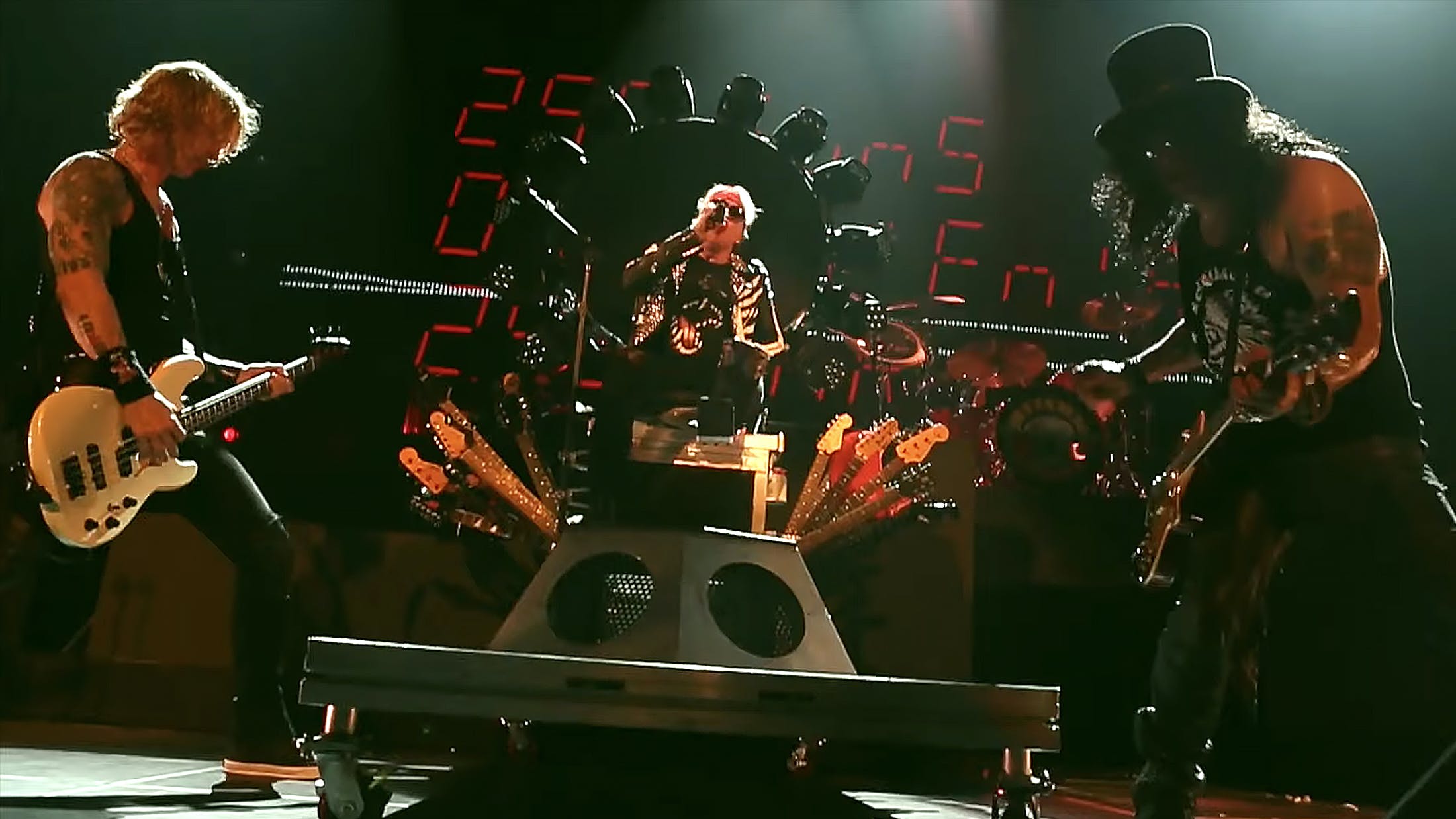 When the news broke, it did so out of the blue, and via a car window.

“Axl Rose has broken his foot!”

Those of us stood in the Las Vegas sunshine, tailgating outside the city’s box-fresh T-Mobile Arena, did a double-take. The car from which this mystery newscast had been broadcast had not hung around to take follow-up questions, instead winding up its window and disappearing towards the nearby multistorey car park. In little under six hours’ time, the arena’s doors were due to open on 20,000 fans and the new era for the finally reunited Guns N’ Roses. Given we were dealing with a band who were once hours late to the stage so its frontman could watch a Teenage Mutant Ninja Turtles movie, no-one had a clue what his rumoured inability to walk would mean for the night’s entertainment.

Of course, this was the kind of drama everyone said would happen. It had been three months since news of Axl, Slash and Duff McKagan’s reunion plans to headline California’s Coachella Festival (details of the sprawling tour would follow later) were announced – ample time for the content machine to be positively brimming with expert opinions on why this folly was doomed for failure. It was an inevitability that the wheels would come off, they crowed, and undoubtedly in spectacular fashion. Historic quotes in which one (Axl) labelled another a “cancer”, or declared that one (Axl again) would be six feet under before they would ever again share a stage with the others, were rehashed with a smirk. The announcement that “Axl Rose has broken his foot!” was bellowed not with nervous trepidation, but an odd glee.

There were plenty who seemingly wanted it to fail; plenty more who considered the whole thing a joke. The band themselves were certainly having their fun with it, too, billing their return under the words ‘Not In This Lifetime’. The history books would show that their first official reunion shows did not take place as advertised on the evenings of April 8 and 9 in Las Vegas, or at Coachella across the following two weekends, but on April Fool’s Day.

Word of an intimate ‘warm-up’ at West Hollywood’s Troubadour, where the band had made their name three decades prior, sprung up on internet message boards and social media sites on the evening of March 31. By the time official confirmation arrived the next morning, a queue a few hundred deep had formed outside the former site of Sunset Blvd’s long-defunct Tower Records (a store in which Axl and Slash had both worked in their hand-to-mouth days). In exchange for a $10 bill, those lucky enough to be in the queue’s earliest number were ordained with a wristband for a show that would begin “sometime after 11pm”. (It’s unknown whether the celebrity likes of Jim Carrey, David Arquette and Bradley Cooper, later spotted on the Troubadour balcony bearing witness to the 17-song set, had also camped out.)

No-one in attendance, however – not even Ace Ventura – would notice Axl snapping the fifth metatarsal in his left foot after taking a mid-show tumble that night. Shortly after news hit Las Vegas seven days later, where Kerrang! had arrived to witness history, surreptitiously taken soundcheck snaps from inside the T-Mobile Arena spread on social media, showing the frontman hobbling around on crutches and sat in a wheelchair. So when the arena doors finally opened, 45 mins behind the advertised time of 8pm, no-one knew how the show was going to take place. When the night’s lone support act, Alice In Chains, took their final bow, no-one knew how the show was going to take place. It’d be Dave Grohl and his throne to the rescue, as everyone knows by now.

But even as the house lights dropped and the Looney Tunes theme song played out to mark the band’s onstage arrival, the surreal sense of the occasion wasn’t lost on the fans around us, many of whom had travelled across state and even country lines. Between opener It’s So Easy and the curtain-closing Paradise City, that feeling never dissipated. The three hours in between saw Appetite For Destruction classics played for a renewed swagger, Use Your Illusion epics restored to their full splendour, and Chinese Democracy cuts reborn as true Guns material. They might not have been able to turn back time, but for die-hard fans, so starved of their favourite band for so many years, there were plenty of moments it almost seemed to stand still.

And there, sat at the heart of it all, was the sight of a seated Axl Rose – humbled, taking the whole thing for grace and humour, rather than rage and indignation. “It is certainly his greatest performance in 25 years,” read the lengthy K! review filed five hours later, with the next day’s sunrise (and the mother of all hangovers) emerging.

The reviews that greeted the band’s Coachella set the following weekend were less favourable, penned by a mainstream media more focused on pre-written cheap shots at Axl’s waistline and the band’s age than on, say, taking in Angus Young’s guest appearance for a pair of AC/DC numbers (the show had been preceded by the news earlier that day that Axl would be fronting his heroes on their own upcoming stadium run). Speaking prior to the event to the Los Angeles Times, Paul Tollett – president of Goldenvoice, who run Coachella, and a former promoter of the fledgling GN’R in their early days – revealed that conversations had been running for some two years to reunite the band at the festival, with the seeds planted with guitarist Slash as far back as 2014. “I’ve been trying for a while,” he was quoted as saying. “Those types of things, it can’t be one person. It’s got to be a lot of people and different reasons it’s happening.” The rumoured $14 million pay-day would likely have been one.

To date, the reunion of The Most Dangerous Band In The World has stepped out onto some 175 stages and pocketed in excess of $600 million. Further rearranged stadium dates await at the end of the pandemic, while whispers about a new studio album not only persist, but grow louder. “The best thing about [the reunion] is that we did reconnect, in a very deep way,” Duff McKagan told us during our K! In Conversation event in 2019. “We’re now grown-ass men and can be honest with each other. We’re able to communicate and figure shit out.”

The Guns N’ Roses reunion was supposed to be a car crash. And yet nothing – and certainly not a broken foot – looks capable of derailing it.