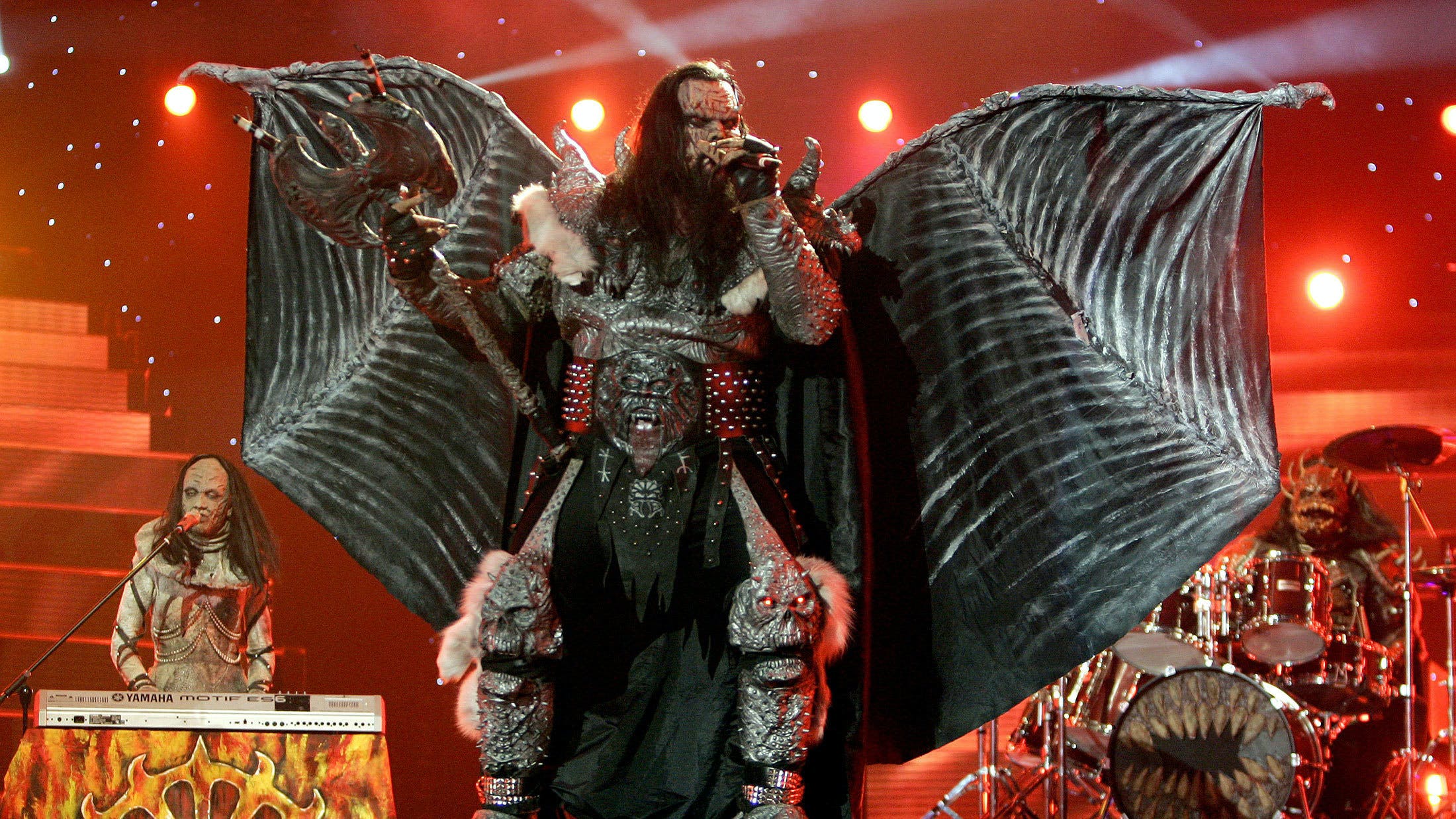 Onstage at the O.A.C.A. Olympic Indoor Hall in Athens, something monstrous is stirring. It’s the final of the 51st edition of the Eurovision Song Contest, and among the more usual Eurovision fare of overwrought balladry, twee folk-tinged ditties and cheesy Europop, Lordi stand out like a Lovecraftian beast emerging from an ornamental carp pond. Riffs crash out as pyro sends sparks into the air and the massive refrains of Hard Rock Hallelujah fill the air. The band look like latex nightmares in their full horror mask and costume glory. ‘Wings on my back, I got horns on my head / My fangs are sharp and my eyes are red,’ growls front-thing Mr Lordi as great bat wings extend from his back. It’s a far cry from Ireland's entry Brian Kennedy crooning, ‘Every song is a cry for love,’ but it’s the Finnish fiends that end up winning the contest, fuelled largely by the popular vote from several hundred million viewers.

Not that Lordi were unanimously popular to represent Finland in the first place. The band’s first spark of life had ignited as far back as 1992, beginning as a solo project from vocalist, songwriter and chief visionary Mr Lordi, aka Tomi Petteri Putaansuu. It was another decade before they put out their first album as a fully-fledged band, but by 2006 – the year they entered Eurovision – they were an established (if still somewhat cult) touring act. Even in Finland, though, a country with the highest ratio of metal bands per capita in the world (there’s even a dinosaur metal band for kids called Hevisaurus), Lordi did not look a natural choice.

For such a metal country, certain parts of Finland had a preoccupation with the Eurovision Song Contest. They had never won the contest or even placed in the top five in more than 50 years of trying. On three occasions their representatives returned with the dreaded ‘nul points’. "It's been a total failure, it is truly a national trauma to us," said Kimmo Valtanen, the managing director of Sony BMG Music Finland, Lordi's record label at the time.

There was plenty of internal resistance to Lordi being chosen as entrants, with one campaign favouring a ‘safer’ folky alternative. Musically, of course, Lordi are not the most extreme band out there. A mainstream media with a woeful lack of frames of reference when it comes to rock and metal regularly referred to the band as death metal, but take away the masks and they’re far closer to the bombastic stadium rock of KISS or the early glam metal of Twisted Sister. It was still seen as a stack-heeled step too far, though, while religious groups in Finland and beyond also raised objections. The Guardian reported in the run-up to the competition that a group of protestors known as the Hellenes based in the host country had called on the Finnish government to intervene. "We ask the Finnish Commission of the Eurovision Song Contest to cancel the procedure and choose another song. This evil and satanic Finnish band is not welcome in Greece,” they wrote.

Despite the opposition, which included plenty of snide comments and sniping as they swept through the semi-finals, Lordi not only won the Eurovision Song Contest 2006, they did so with an absolute landslide. They became the first Finnish act to triumph, the first hard rock or heavy metal band to win and they brought in a then-record points haul of 292. The UK were one of six countries to award Lordi the maximum 12 points, along with Germany, Poland, Sweden, Iceland and Estonia.

A vindicated Mr Lordi later told the BBC: "There is a saying in Finland that hell freezes over before Finland wins the Eurovision. There were so many people against us before we went to Athens and where are those people now? Well I hope they moved to Sweden. There were a lot of people who said if Lordi got through to the final, they would move to Sweden. Now we did it and won the whole thing, we will help them pack and wave to them at the border."

As for the accusations of Satanism, he added: "In Finland, they've said things like we eat babies for Christmas. Whenever we appear in public people there do their best to ignore us. We are not Satanists. We are not devil-worshippers. This is entertainment. Underneath [the mask] there's a boring, normal guy, who walks the dogs, goes to the supermarket, watches DVDs, eats candies. You really don't want to see him."

In the immediate aftermath, Lordi received congratulations from Finland’s president and broke another record for the biggest karaoke performance as 80,000 celebrating fans sung Hard Rock Hallelujah in Helsinki’s Market Square. The single release and accompanying album The Arockalypse both topped the charts at home and were big hits worldwide. They scored a lucrative series of promotions including Lordi-branded cola, boiled sweets and credit cards, and a square was named in their honour in the Lapland city of Rovaniemi.

The win boosted the band’s profile hugely, but it also became a double-edged sword. Speaking to MariskalRock in 2017, Mr Lordi confessed: "There was a time a couple of years ago – well, more than a couple – when I really, really, really hated that everybody's always asking about the goddamn Eurovision… Nowadays I have come to terms with it. It's, like, okay, I'm actually proud that we are part of Eurovision history and I am proud that Eurovision is part of this band's history.”

He continued: “I absolutely don't regret that – absolutely not. Because I have nothing bad to say about Eurovision itself, but the problem that we have had in the years is the people who actually don't know anything else, except for the fact that we were on Eurovision. And that is a big stamp to get out of – it's like a fucking tattoo, you have a fucking tattoo on your forehead that says 'Eurovision'. And that is something that really, really, really drove me nuts some years ago.”

And did Lordi open the floodgates for other bands to follow? Well, no, not really. There have been a lot more guitar-oriented acts trying to follow in their cloven hoofprints (including Finland’s entry in this year’s socially-distanced shebang, Blind Channel) but Lordi remain the only hard rock or metal band ever to win the competition. Even before the dust settled, the Guardian sneeringly described Lordi’s win as “the victory of comedy over music”, as if the whole Eurovision edifice wasn’t an often enjoyable but ultimately frothy exercise in formula. Perhaps it’s better, then, that metal stays lurking in the shadows of the competition, revelling in the outsider status that suits it best.

Lordi to perform at Eurovision's Grand Final in May