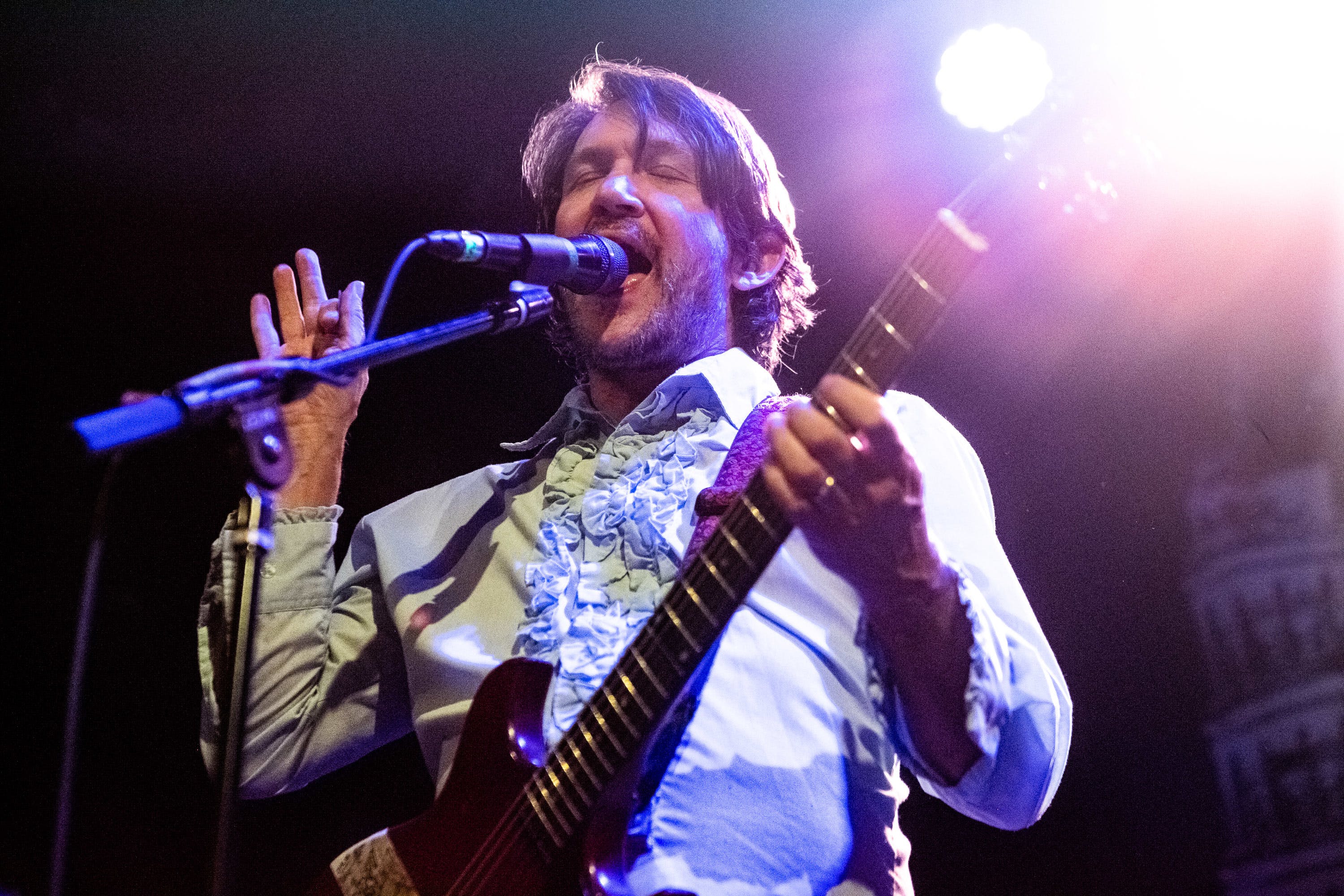 Tim Kasher isn’t sure who he is. Not so much in general, but mainly when he’s playing live. The 44-year-old first formed Cursive in 1995 at the age of 21, and the band have released eight full-length albums, including last year’s phenomenal Vitriola. But that’s just the tip of the iceberg -- Tim has also made five records with his solo project-turned-full band outfit The Good Life, and released three solo albums, All of which burst and bloom with a confessional earnestness, as if Tim is unloading his deepest, darkest heart secrets with the intensity of someone on their deathbed who’s (literally) dying to get everything of their chest.

Yet, sitting in the back of Cursive’s tour bus outside New York’s Bowery Ballroom, Tim is quick to point out that while most people think his songs are purely autobiographical, that’s not the case at all -- especially with Cursive.

“I really scratch my head about why I got wrapped up in that,” he says, “and why I’m in those crosshairs. Plenty of times I’ve run into people who I can tell are asking me questions and are judging or grading me on my answers because, if things aren’t autobiographical they think it’s inauthentic and that I’m doing a disservice to them or to the music that I do. And I don’t know why that happened. There are so many songwriters who write personal things -- as I do as well – but then also don’t, but something happened along the way that people have certain demands of me.”

One reason for that, surely, is the way that Tim fully inhabits the characters in his songs. Throughout the band’s career, he’s become those the narrators onstage, blurring the line between life and art, what’s real and what’s not. It’s something he does yet again later that night inside the venue, as the band storm through an intensely powerful set of songs -- Tim at the front with his guitar, singing his heart and life out as if they were his. Which, of course, they are. But at the same time, they’re not.

“All of it is just such a weird thing,” he says. “Like, the word ‘performance’. Is it an act? And if it’s an act, is it inauthentic? And that goes back whether it’s autobiographical or if I’m playing a character. For years, I was really secure in performing with Cursive, because it *was* a character. They are songs that come from me, but they’re such a total extension – it’s like the furthest wing of me. Whereas The Good Life and my solo stuff, I fit into those clothes better. So I am a character in Cursive, but then is that inauthentic?”

He pauses, clearly thinking about this weird existential dichotomy, before continuing his chain of thoughts and moving even further inside this particular rabbit hole of self-aware self-reflection. “For a handful of years,” he says, “I could really just like inhabit another person, kind of, and go out and perform the songs still. But then I guess I got older, and now I feel I attach myself to the songs more, so I’m trying to figure out how to authentically get into the music. You shouldn’t have to have alcohol to do it. But that’s just always the way I’ve been. I’ll even just be at shows and be like ‘Oh man, this is a great set. I’d love to have a shot right now, because I really want to feel this a little bit more.’”

There have been times -- many times, in fact -- when Tim has performed drunk, something which likely cements the idea that he is the (often unstable and often drunk) people within his songs, and has reinforced the notion that he is this Bukowskian drunken romantic. But once again, that perception of who Tim is quite different from the reality of who Tim – who is now happily married and lives in Los Angeles – actually is, though that line was probably blurred a little more in the past.

“I still drink,” he admits, “but I drink so much less, and I’m trying to be so much healthier about it. The damage that I think I’ve done to my body makes me not feel great. I mean, it’s not awful, but it’s a struggle and we’re getting older. What I really want to demand of myself is: ‘Why do you need alcohol to get there? These are your songs – can’t you just express yourself?’”

Above: The Appleseed Cast

Alcohol or otherwise, that evening Tim and Cursive do just that. The evening kicks off with a phenomenal opening set of emotionally cathartic rock from long-running Lawrence, Kansas outfit The Appleseed Cast -- which sets the Bowery Ballroom on fire in a haze of blissful yet despondent swirls of sound – and an intense, exultant performance from mewithoutyou, who conjure up an eternity of spiritual angst and uncertainty while they’re onstage.

Much of Cursive's set is taken from Vitriola, whose songs confront an angst brought on by the current state of the external world, but there are still numerous moments of soul-searching truth. From that new record, Free To Be Or Not To Be You Or Me, It’s Gonna Hurt and Ouroboros are phenomenal, all sounding like old Cursive classics, and are received by the crowd as such too. And then there’s the actual oldies but goodies like Sierra, From The Hips and Art Is Hard -- a song that questions and confronts the very notion of authenticity Tim was earlier contemplating -- which see the crowd sing, just like Tim, as if their lives depend on it, as if these songs are all and only about them.

Ultimately, it doesn’t really matter tonight -- what’s real or not, whether Tim’s lyrics are an accurate reflection of his life. These songs might not be about Tim Kasher per se, but they’re still infused with his experience and his emotions and they’re as absolutely real as anything else. Rather, he and Cursive have, like the best novelists, mastered the art of telling truth through fiction and it’s a truly beautiful and incredible thing.

“I’m such a believer in that,” he says. “And if there’s anything that’s maybe manipulative it’s that only I know what’s real and what’s not. And I’m sorry to the reader or the listener if they don’t get to know everything.”

He breaks into a mischievous smile. “But that’s also the shroud of mystery that you maybe should keep.”

The Appleseed Cast: Album By Album With Chris Crisci

The founding frontman walks us through the band’s discography, and exclusively premieres a track from the new record, The Fleeting Light Of Impermanence.