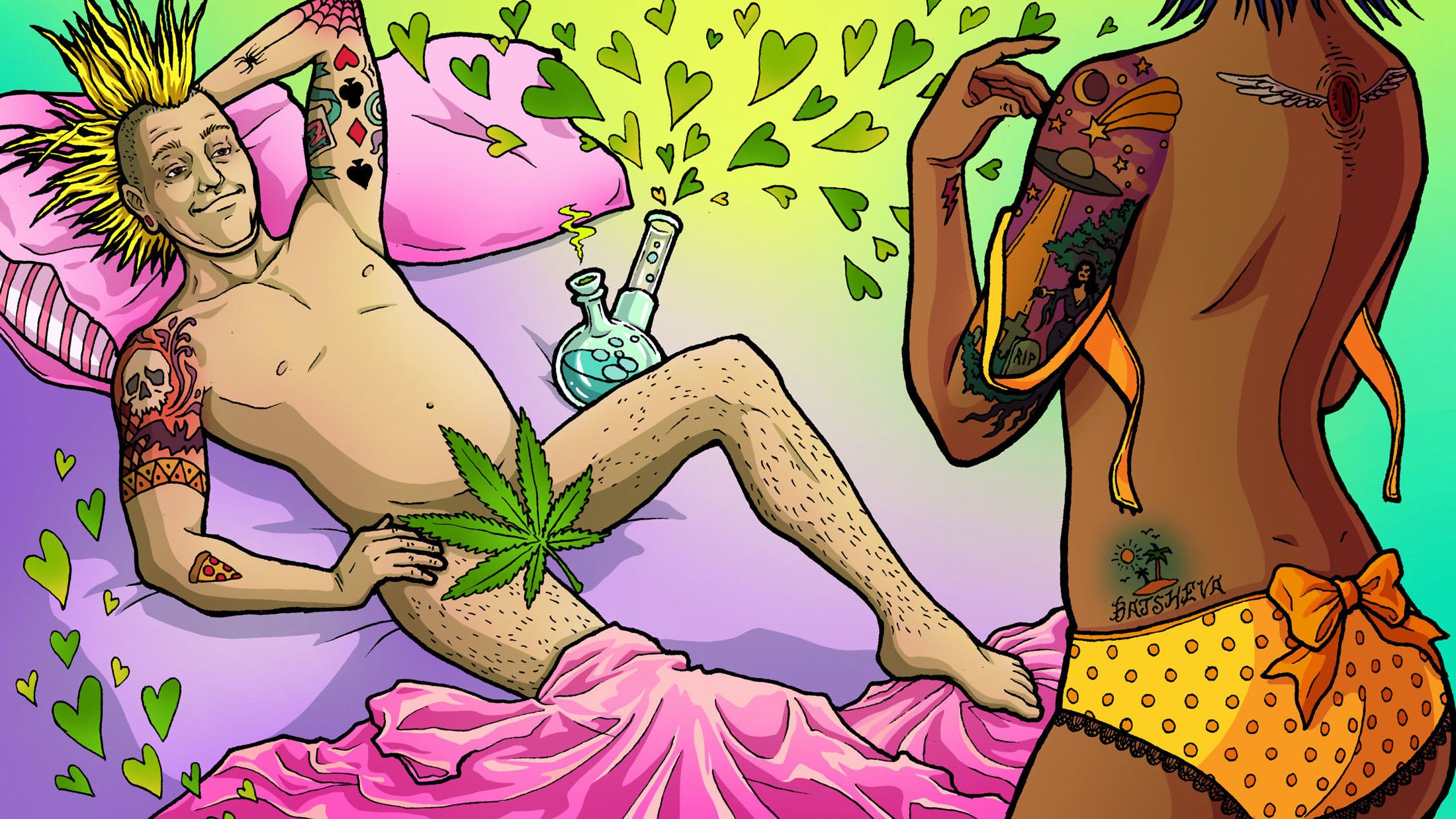 This month, she kicks off discussions on sex, drugs and rock’n’roll by giving you a quick guide to sex and CBD…

What does this have to do with music?

Sacramento alt.metallers and 2022 GRAMMY nominees Deftones recently teamed up with California cannabis brand Golden Barn to launch The Passenger Box: a collection of pot-based products including buds, cannabis concentrate, edibles and vapes. Currently only available in Cali, where recreational cannabis use has been legalised since 2016, the marijuana merch features art by Frank Maddocks, who designed previous Deftones record covers, and takes its name from the track Passenger on their incredible third studio album, White Pony.

But what does that have to do with sex?

Cannabidiol – or CBD for short – is a substance extracted from cannabis, which is now appearing in a huge number of sex-related lotions and potions: from lubricants, massage oils and clitoral stimulating arousal ointments, to aphrodisiac drinks, bath bombs, mood-enhancing supplement drops and gummies, and vaginal pessaries.

The UK CBD market is freakin’ massive, and was expected to generate £690 million in sales last year, and new sex ranges are popping up like (magic) mushrooms seemingly overnight.

How is it supposed to boost things in the bedroom?

Firstly, it’s supposed to help you chill out, enhancing your mood and reducing anxiety. This can be handy if you’re someone who gets the jitters about getting jiggy: for example, if you’re a penis owner who worries so much about “performing” (a hideously pressurising term in itself) that you end up overthinking yourself into being – ahem – a flop. CBD success stories have also come from folks suffering with mild vagnismus: a condition that causes the vaginal muscles to clamp shut when penetration is attempted, which is sometimes but not always associated with psychological tension about sex.

Secondly, CBD is anti-inflammatory, and may help ease discomfort during sexy times caused by things like period cramps, conditions such as endometriosis, and joint and muscle issues. It can also help soothe after-sex soreness caused by consensually getting banged like a big bass drum.

Many users claim CBD heightens pleasure and intensifies climax. That’s not surprising, since the human body already produces its own natural “endocannabinoids”, which are released in abundance during orgasm. “Studies show there is a significant relationship between endocannabinoids and female arousal, in particular, and we know endocannabinoids play an essential part in sexual function,” explains Ruby Devoy, specialist cannabis journalist and founder of TheCBDConsultancy.com.

Hold on. If I put CBD on my down-belows, will I get high?

Nope. The psychoactive component of cannabis is a totally different cannabinoid, called tetrahydrocannabinol, or THC (remember: THC = from shrubs, TLC = No Scrubs). CBD products are only legal to sell in the UK if they contain so little THC as to be practically undetectable. This isn’t enough to get you mashed, so no stoner boner for you.

How do I know all this hype about CBD isn’t total nonsense? Where’s the scientific evidence?

“One-hundred years of cannabis prohibition has really set scientific research back,” admits Ruby, “but despite the red tape induced difficulties, there are actually over 41,000 studies into cannabis and the endocannabinoid system. Unfortunately, very few of these directly investigate sexual health, and especially women’s sexual wellbeing… as is a problem generally, really.”

However, there’s plenty of proof we can reasonably borrow from other areas of study that logically shows how CBD could help make things sweet between the sheets: there’s lots of evidence that it reduces anxiety and causes vasodilation, for example, even if those investigations don’t focus precisely on how this effects peens and poons.

If I want to try, what should I look for when I buy? I don’t want to slap any old shit on my bits

Back to our gem, Ruby: “The CBD market used to be a bit of a Wild West, and many oils were found not to contain what they claimed on the label. Now, all edible CBD is classed as a ‘novel food’ for regulatory purposes.” CBD ‘cosmetic products’ are required to pass a Cosmetic Product Safety Report. This means a lot more technical, toxicological and traceability data is required, so it’s a tad easier to be sure what you’re putting in/on your precious self is safe, and the real deal, but you should take care to source your sexcessories from a reputable supplier.

You might also want to look for blends marked as being ‘Broad Spectrum’. “This means that they contain a good mixture of extracts from all parts of the cannabis plant, such as different cannabinoids, terpenes (aromatic compounds responsible for a plant’s scent) and flavonoids (which dictate a plant’s colour),” explains Marc Burbidge, CEO and Innovation Director at B3 Labs, a leading CBD product manufacturer based in Manchester. A phenomenon called the ‘entourage effect’ means that CBD can be more effective and provide a more complete interaction with the body when there are lots of different cannabis elements available to play with each other.

That said, Ruby stresses that CBD can still add lots of lusciousness to your love life all on its lonesome ownsome as an ‘isolate’. It’s worth paying attention to which terpenes are in a blend, too, as they can have various impacts: “Limonen [a terpene produced in the cannabis flower’s resin glands] and linalool [which has a lavender smell] are known as libido enhancers, but myrcene [with a peppery, spicy scent] tends to make you sleepy.” So, better for nodding off than, er, nobbing off.

I’ve still got the CBD heebee-jeebies and am nervous about risks. Is it possible to overdose?

“Overdose is virtually impossible with commercially available products, especially topicals like lubes,” says Dr. Dmitry Loktionov, co-founder of CBD company Quanna. “There were reports of reversible liver damage with edibles taken at super high concentration all at once, but a more likely risk is the chance CBD could make you drowsy: be careful if you’re operating machinery, especially if you’re also taking other drugs or supplements that could make you tired. Some people also experience light-headedness, nausea, diarrhoea or a dry mouth.”

“CBD can interact with prescription drugs like the common blood thinner, warfarin, so check with your doctor before using it,” advises Daniel Zemmour of Molecule CBD and wellness specialists.

If you’re taking CBD orally, start with the smallest recommended dose and work up slowly. Topical CBD sex products tend to act primarily where you put them, i.e. on your privates, but some will be transported by your bloodstream too, so bear that in mind if you’re using edibles as well as greasing up your bush with extract of kush. The mucous membranes of the vagina and anus also soak up CBD better than the skin of a penis.

Gimme some product recommendations then

Ruby’s faves: The Tonic Clit Spritz is “warming and tingly and really amps up sensation without making you overly sensitive”, while HOWL lube is great, and not only for buttering buttholes, as it has “an excellent, slick consistency that boosts every touch”.

Marc’s faves: “I hold Damiana libido tincture responsible for me having three children in close succession – it had a profound effect on my partner’s sex drive.”

Daniel’s faves: “Quanna Oomf lube is water-based rather than oil-based, which means the benefits kick in almost instantly rather than you needing to wait 15-20 minutes, plus it won’t stain your sheets, and my customers love Kiskanu Intimacy Oil too.”

So, there you have it: from Deftones joints, to next-level boinks. Smokin’.

You can get your Spotify Wrapped 2022 results right now

Spotify Wrapped 2022 is here! Get a full breakdown of all your listening habits this year…

Savage German metallers Implore continue to show that chill is for other people on scalding fourth album The Burden Of Existence.