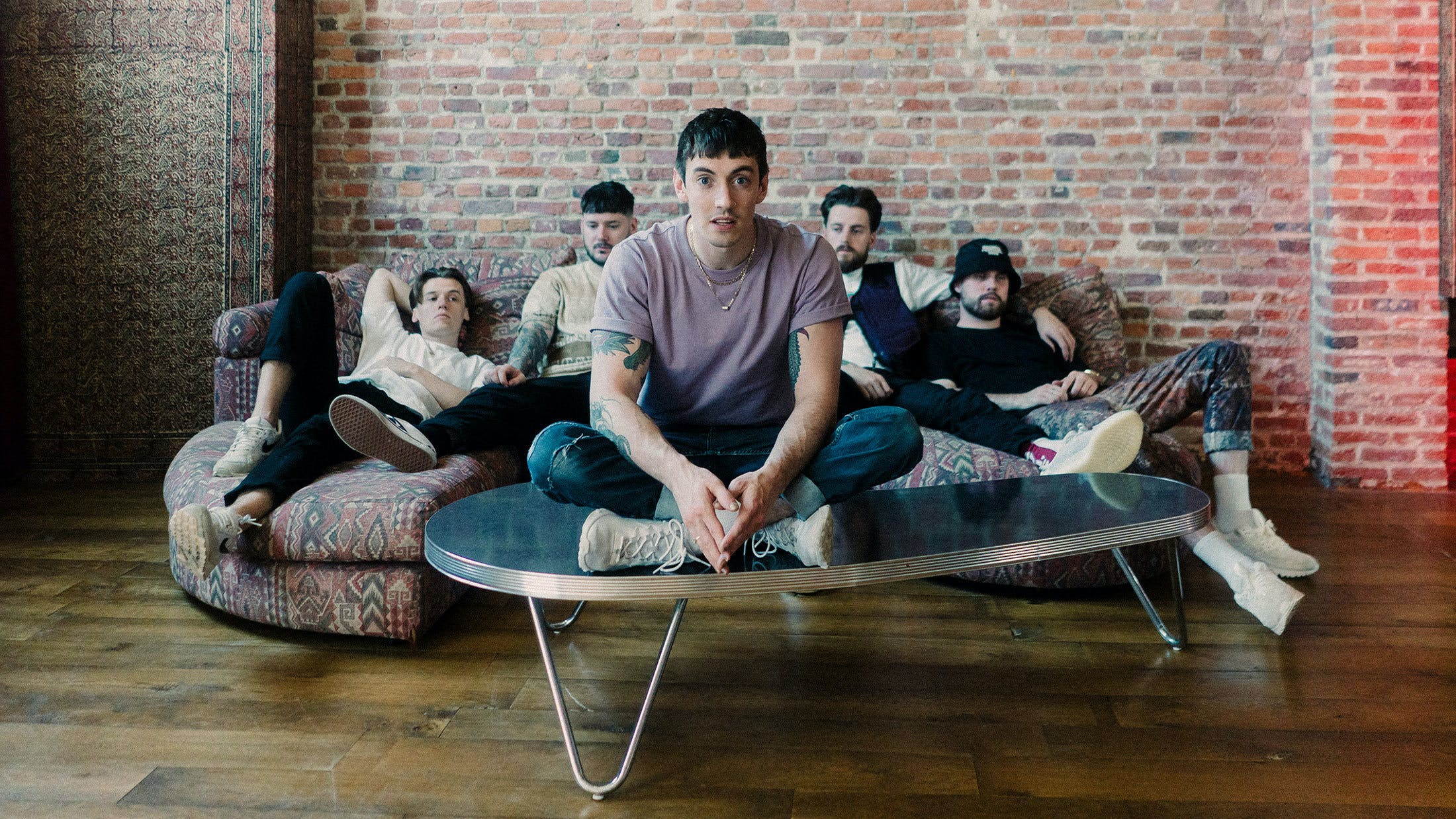 Tobi Duncan considers himself to have been dealt a pretty good hand when it comes to his family. Raised in a loving environment and encouraged to embrace who he is, the Trash Boat vocalist never felt the need to hide the fact that he didn’t identify as straight, to the extent that he didn’t even feel like he had to come out to his parents.

Sadly, his story isn’t one that applies to all of the LGBTQ+ community, and having grown close to someone whose parents shunned them because of their sexuality, Tobi began to consider those who experience prejudice, bigotry and hatred every single day.

The result of this is He’s So Good, Trash Boat’s thrilling new single and one that proudly stands at odds with the introspection that characterised the band’s earlier material. As they enter a bold, outward-facing new era, we catch up with Tobi to discuss the origins of He’s So Good, his views on sexuality, gender and identity, and what the future holds for one of Britain’s most intelligent punk outfits…

What was the inspiration behind He’s So Good?
“I met someone on the road who I got to know really intensely over the course of a week. We hung out every night and talked for hours – it was that thing where you skip any pretence and just open up straight away because you get each other. I learned from him that being a gay man where he grew up, he felt like he couldn’t come out to his parents and be himself, because he knew he wouldn’t be accepted. He had girlfriends throughout his time in school but felt like he couldn’t show any affection towards them, and emotionally he felt completely alone, to the extent that he didn’t have his first kiss until he was 27. He lived in a rural area of the U.S. where it’s not acceptable to be anything other than the nuclear family norm, and it got me thinking about his parents and my own, and how lucky I am, because my parents have always been awesome about my sexuality – it’s just a non-issue to them. I never even felt the need to come out to my parents as a non-heterosexual person; my brother is gay, my uncle is gay, my cousin is gay, I’m like half-gay… in fact, I wouldn’t even pigeonhole myself. I’m not straight, put it that way.

“So I was thinking about this guy’s parents, and I imagined meeting them in person with him and how they probably would’ve been really nice to me and he’d have been respectful to them, but their attitude towards his sexuality meant that on a fundamental level he wasn’t getting that respect in return. It made me really angry to imagine how some people could inflict their own ignorance on someone they’re meant to be guiding. I really find that kind of thing to be a slippery, horrible form of cowardice. These people think it’s their God-given right to be an insufferable c**t, and hide behind obscure references to some higher authority, when really all they want to say is, ‘I don’t like the way you are, and I’d change you if I could.’

“I wanted to put all that into a song, and for the people who’ve experienced this sort of behaviour to know it’s a song written with them in mind. I want people to be able to use this topic as a point of pride, and allow the music to make them feel confident and heard. This is about reminding people that they’re not responsible for other people’s prejudices. When I think about sexuality, I consider it to be something that’s a transcendental part of human identity – all it really means is to be known. It’s not complicated, and it’s only made that way when people project their own insecurities onto others. Imagine how great it would be if everyone was allowed to just be happy, get on with their lives, present in whichever way they see fit and love whoever they want without someone else trying to change them.”

Where do you think these prejudices stem from?
“I don’t care, because each reason is more morally indefensible and incoherent than the next. They all derive from personal biases, fears, repressions… there’s going to be as many different reasons as there are people, but the overarching point is that every single one is bullshit. None of these arguments stand up to any reasonable moral questioning – being prejudiced just fundamentally isn’t the way to treat someone. It’s the parent-child dynamic with regards to sexuality that I’m singing about in this song, but the broader issue isn’t limited to that; it could be work colleagues, school friends or any other scenario. A big problem is that these things often go unsaid, and the point of me writing this song was to flat-out say it, to drop all pretence and explain how there’s no reason that would convince me someone shouldn’t be allowed to present the way they want.

“One of the lyrics in the song is, ‘If it’s true we choose, what’s it got to do with you?’ When I think about those people who say sexuality is a conscious choice it gets me so irritated, because even if it was a choice, then so what? What’s it got to do with you? People have these bullshit assumptions that it’s a choice – and it’s not – but even if it were, if someone chose to present a certain way, what’s the problem with that? There are arguments that posit the subject of a transgender child changing their mind about how they identify, but my attitude to that is, ‘Okay, so they’ve changed their mind – support them! Be there for them.’

“All of this boils down to the fact that I want He’s So Good to be used as a reference point, a point of power and an energy to these people who’ve gone through this stuff to know there is a song written with them in mind. It’s the perfect precursor to what our next album is going to be.”

You say that you want people to know He’s So Good is a song written with them in mind. Have you previously felt like your story and your experiences haven’t been represented in music?
“No, not at all. This is the thing: my story is entirely uninteresting, because I have always felt validated and loved by my parents, and it’s never been an issue for me. I’ve never felt the need to tell people how I identify. I get asked whether I’m bisexual, and my answer is that yes, I have dated men and women, but am I going to label myself by saying I’m bisexual? I guess it’s an easy way to put it, but really, I don’t want to box myself in, because I’m just going to do whatever the hell I want. This whole issue has been something that’s been very passive in my life, and I think that’s the ideal, because people generally want to be seen but left to their own devices so that they can love and present in whatever way they choose. Obviously, that’s not happening, so people need to raise their voice, overcompensate and present themselves in a dramatic way so that they can feel heard, and I totally get and respect that. I’ve never felt like that’s something I’ve needed to do, and He’s So Good is me thinking outside myself, giving my voice to the people who feel that way and like they don’t have the platform when it comes to this kind of thing. It’s about reaching out via music and letting people know that they deserve to be accepted. I really don’t understand the taboo and the idea that, ‘We must change little Billy because he’s going to be a queer and we can’t have that.’ It’s mental – let your kid do whatever they want. This doesn’t have to be a big deal.”

A particularly impactful lyric in this song comes when you’re singing about the father with the line, ‘His father so austere / His boy’s a fucking queer.’ What was your thought process when it came to that lyric in particular?
“I wanted it to be provocative. It’s a line from the father’s perspective, and the idea is that he says it and your response is, ‘Yeah, and…?’ That’s his phrase and him using it with his own venom and prejudices in mind. The dad can fuck off, basically! As the song also says, he has a son he doesn’t deserve. You can’t choose who you’re related to, but you can choose who you consider to be your family, and that sentiment is reflective of our new album. A lot of the stuff I’ve previously written has been very introspective and about the battles I’ve had with myself, whereas this whole record is me just coming out and fucking saying things as plainly as I can. That’s where the ‘His boy’s a fucking queer’ line comes from – it’s about making the father look like the dickhead he is, and demonstrating that the song is speaking to people who are the opposite of him.”

Would it be reasonable to speculate that your new material is much more outward-looking than what you’ve written in the past?
“Absolutely. With the way my physical and mental health were deteriorating as we entered the COVID crisis, I found myself leaning more into the introspective style of writing that I’ve used in the past, but it felt to me like so much was getting left unsaid. Life humbles me every chance it gets, and I can overcompensate by being spiteful towards the futility of it all. I came to the realisation that I can’t allow the negativity of something I can’t change to poison my desire to succeed – I wanted to be outgoing, tenacious and happy, and I really fought when writing this album to make the good things feel better, even if the bad stuff got worse. I’ve decided to say whatever is on my mind, and with several of these new songs – He’s So Good included – they were written in a single day in the studio, sometimes in less than an hour. It was very much farm-to-table, no-filter and then worry about making it make sense later. Three of those songs have been chosen as leading singles for the album. This record wasn’t written in an environment where I sat in a dark room, got super-high, thought about how sad I was and wrote some poetry. Our next album is plain and simple what we want to say, no frills, and they’re the best songs Trash Boat have ever written.”

Trash Boat’s new single He’s So Good is out now via Hopeless Records.