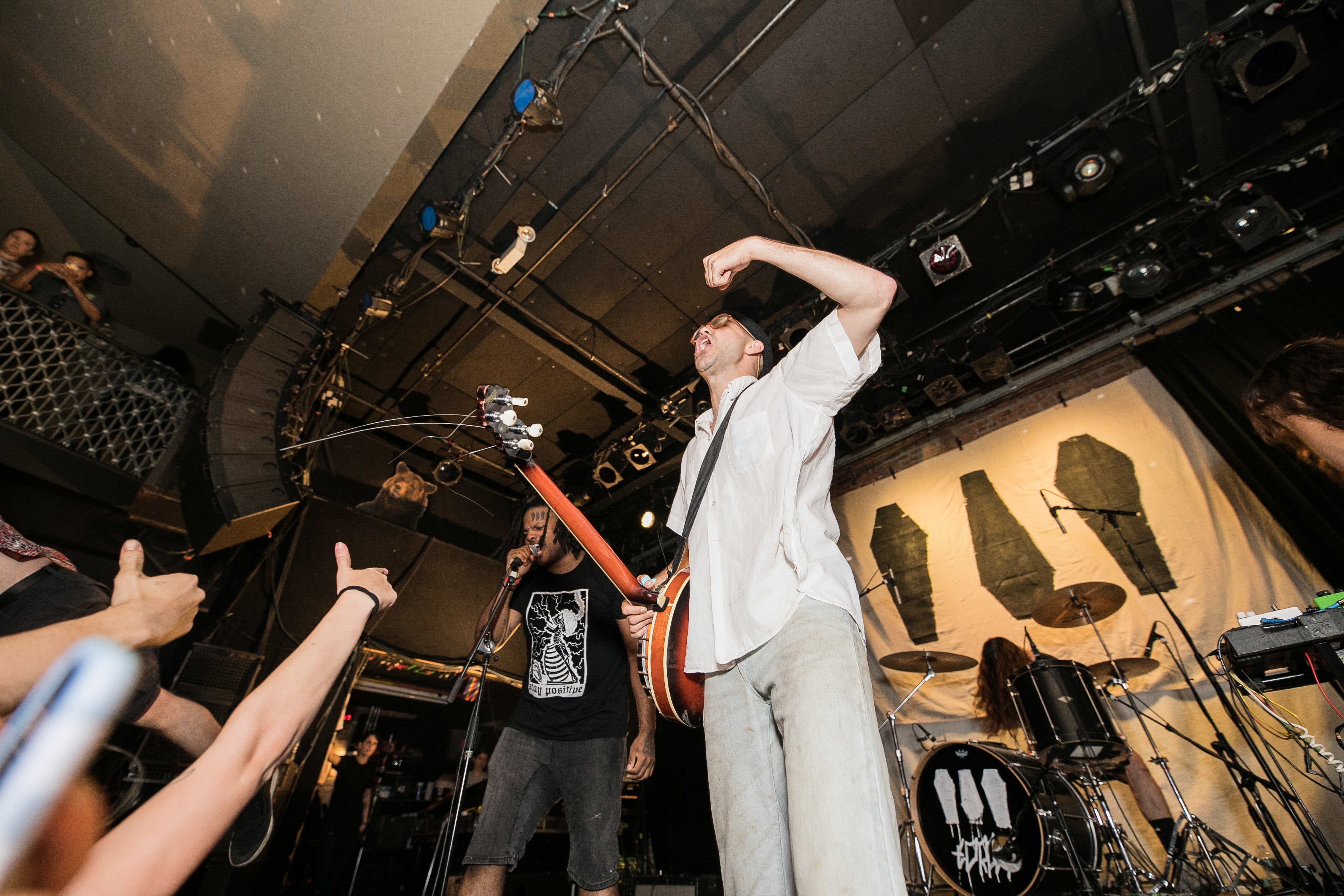 It’s late on a Saturday in Brooklyn, New York. A group of punks are all lined up outside Music Hall of Williamsburg, and from their attire to the conversations happening, it’s clear that they are angry at both the political climate and trying to understand their place in the world as a whole. All of this fuel is bottled up, and ready to be unleashed tonight at a sold-out show for some of the biggest rising stars in the world of punk rock, Show Me The Body, put together by their own artist collective, CORPUS. For this late show to fill up the venue’s 650 capacity is as much an impressive feat as it is proof that unity in music is not only possible, but clearly yearned for.

Inside, the music played over the PA throughout the show is largely made up of the artists performing their own works. If a band isn’t playing, one of the DJs onstage is jamming out their remixes of modern hip-hop tracks, from more popular names like Bobby Shmurda to the noisier, more underground side of the genre like Death Grips. Regardless of who is being remixed, the crowd is vibing to it. There are a handful of attendees in the crowd who don’t quite understand the territory they are in initially, but sure enough get the hang of it and began to join in with the rest.

As soon as Blu Anxxiety starts their set, they remind the crowd there has never been a better time to revolt. The crowd cheers heartily. When they begin performing, their music is synth pop-rooted, much in the vein of Cold Cave and Depeche Mode, with a sprinkle of punk attitude in the mix. This translates well, as the mosh pit erupts over a large portion of the floor. It’s a brief set that concludes with a cover of Real Life’s iconic Send Me An Angel, full of love and passion.

When Philly's Jesus Piece take the stage, everyone in the room is prepped and ready for chaos. Within the first riff, the push-moshers and crowd-killers collide into a warzone. Songs like Neuroprision and Collider come out swinging, and the stage divers of the night began to come in and take off. Some just jump into the crowd -- others kick-flip in. There’s a sense of danger and aggression, but also a spark of excitement and joy, one that is often missing at shows that run past 11pm. This isn’t like Jesus Piece’s set in the K! Pit, but rather a mix of people who wouldn’t normally go to a Jesus Piece show and people who see them whenever they hit New York, having a blast. All of this is topped off with the band members stage diving into the crowd, putting an end to a short yet impactful performance from one of the best bands in modern metalcore.

When Show Me The Body finally perform, the crowd might be exhausted, but they don't show it. The band play their jarring mixture of hardcore, hip hop, and experimental punk -- complete with a distorted, amplified banjo -- while pushing against the edge of the stage just to get an inch closer to the sweaty, enraptured crowd. Members of the audience are onstage during much of their performance to grab the microphone and sing along to their favorite parts from the band’s new record, Dog Whistle. Since their inception, Show Me The Body have not only stood for unifying a torn music world, but patching it up themselves by incorporating elements outside of their hardcore-rooted punk, such as hip-hop and electronic music, as well as collaborating with artists outside of their comfort zones both in studio (as showcased on their recent CORPUS I mixtape). Their showcase is a quick, intense, 30-minute jam where there are no rules or limitations. It’s all about expressing yourself through whatever means, as long as everyone respects each other.

The show’s sweaty moshing, emphatic stagedives, and crowd screaming its heart out in a cramped space prove that punk is thriving -- not only in New York, but in America as a whole. If there’s ever a night that CORPUS completely accomplished their mission, it’s tonight.

Show Me The Body, Jesus Piece, Year Of The Knife, and Machine Girl will join Code Orange on this huge tour.