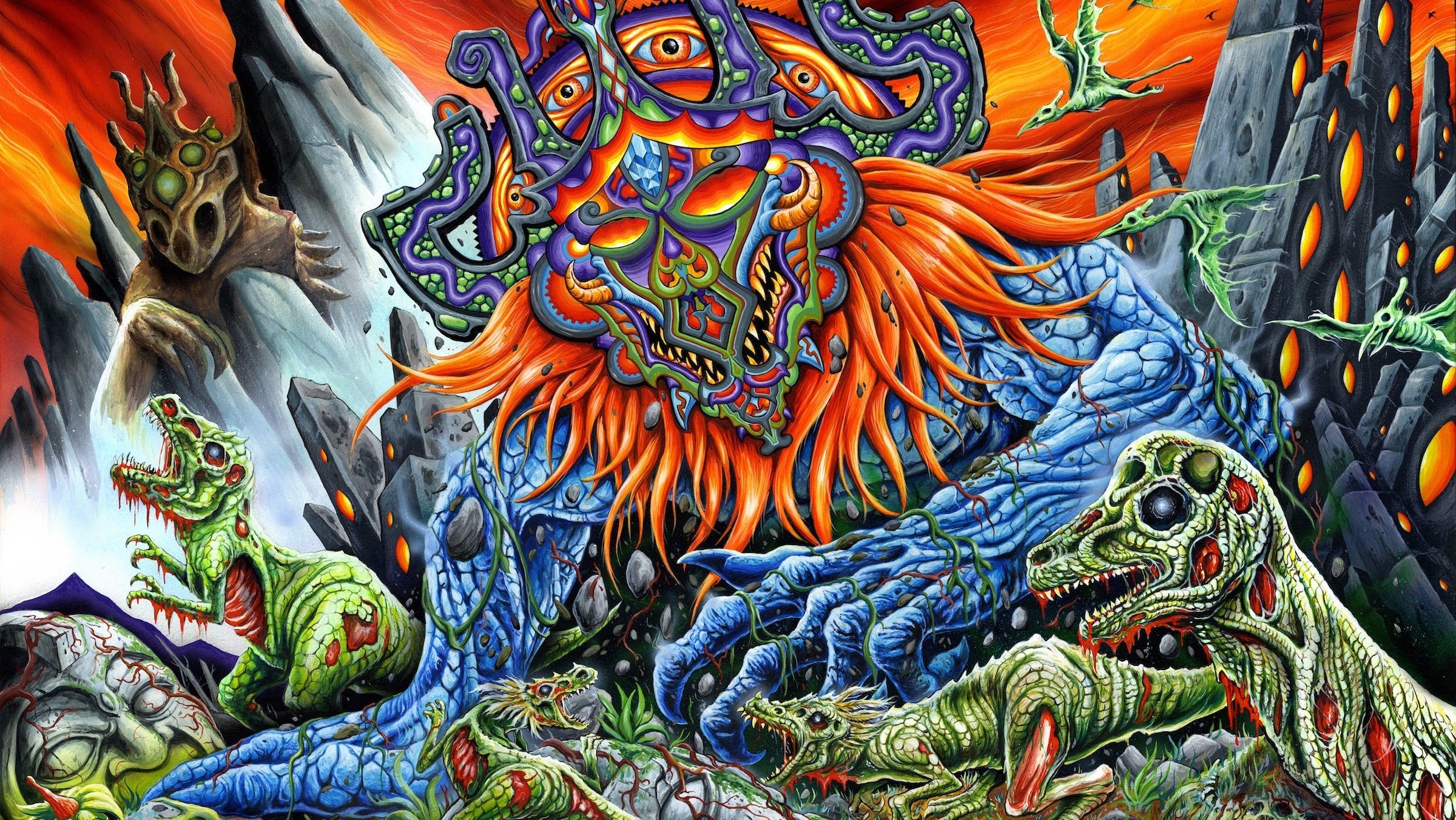 Fans of the sludgier end of heavy metal are likely already familiar with artist Skinner’s kaleidoscopic, horrifying art, the likes of which have shown up everywhere from the cover of Mastodon’s Once More ‘Round The Sun album cover to the animated video for High On Fire’s 2015 single The Black Plot. Skinner has become one of modern metal’s most recognizable artists, with a signature style that is instantly compelling and impossible to forget.

Skinner’s recently-released second book, Don’t Have Feelings, Don’t Make A Scene, chronicles the last seven years of his career, following the steady upward climb that gas allowed him to open up about personal demons he finally had to face: Depression, anxiety, sleep apnea, ankylosing spondylitis (a condition that involves painful inflammation of the spine), and other medical issues that became too much to push aside and forced him to seek proper treatment and take care of himself.

“I had been doing art my whole life as I guess just a way of making sense of the world,” says Skinner via Skype. One on one, the madcap eccentricity of his work falls away and he breezes through his history as an artist with equal parts kindness and humility. “When you’re young and growing up in the ‘80s, you’re constantly stimulated by wrestling and movies and cartoons and comic books -- all this stuff. It was easy for me to be inspired.”

As a younger member of Generation X, Skinner came of age in a golden era for pop culture. As evidenced in his work, the horror movies of the era were deeply impactful.

“I remember growing up, all these other kids like Freddy Kreuger and what I thought were really mundane horror movies,” he laughs. “I felt like, ‘these Fucking peasants will drink any swill Hollywood gives them.’ I was pretentious early on, then all of the sudden when Child’s Play came out, I was like ‘This is my guy, Chucky’s my guy.’”

For Skinner, Chucky was a metaphor for being a kid with a huge, diabolical spirit trapped in a tiny, limited body. This feeling also manifested itself in a love of partying -- at least until he found his literary match. “After a while, I was really disinterested in everything except for whatever dark art and weirdo shit drugs I was doing, then I read an HP Lovecraft book.”

Lovecraft’s influence, primarily the ideas of colorful cosmic horror and trying to understand the unknowable, became a focal point of Skinner’s work. But while countless metal bands have found similar inspiration in Lovecraft and the other Cthulhu Mythos authors who followed him, Skinner’s take on the author’s dark pits of nothingness resulted in a relentless positivity that many wouldn’t expect.

“The space inside your mind where you anticipate the dread of not knowing anything is the key to cosmic horror for me,” says Skinner. “It’s weird because it’s misanthropic, but it teaches you to be a better person. Once you realize nothing matters, you do everything you can to enjoy your time on Earth. The flattening of the human ego is a gift.”

Skinner’s history as a part-time musician made pairing his art with heavy music a no-brainer. Attending shows turned into friendships with the bands, and those turned into overnight stays and showers at his house for heshers coming through on tour. Soon he was up late discussing shirt ideas featuring “psychedelic nightmare paintings” he’d sketched, which helped pay the bills and quickly established a reputation in the underground scene.

“The connections we make kind of reverberate all over the place,” he says. One such reverberation was a friendship with Dirty Donnie (who has worked extensively with Metallica), which in turn led to a connection to Mastodon’s tour manager Tim Moss and his purchase of one of Skinner’s paintings. “I drive the painting to his house in San Francisco and tell Tim I’m going to Atlanta to paint a mural at Adult Swim. He tells me I should meet his friend Brann [Dailor], and I realize it’s the drummer from Mastodon. Then Brann texts me and I think ‘Wow, this is so exciting. I can’t believe I’m texting this guy that I love so much!’”

Dailor later picked Skinner up “in his truck” and took him out to some local haunted houses before capping the hang off by drinking beer at the percussionist’s Atlanta home. The two became fast friends, sharing similar tastes for a boldly outrageous and clownish aesthetic. When Mastodon asked Skinner to design the cover and gatefold layout for 2014’s Once More ‘Round The Sun, he graciously accepted the offer and put together a stunning representation of the band’s vision to encompass the universe, the sun, and “some sort of beast” to tie together the brutal unity of it all.

“These are the kinds of things that you never in your life think would happen to you,” he says with a quiet reverence in his voice. “It’s unbelievable.”

Skinner’s wide-eyed refusal to become jaded or complacent is precisely what imbues his works with the freshness and excitement it retains today, 11 years into his full-time immersion into the artist life. “Buzz from the Melvins was just texting me a bunch of photos he while was was on the road, asking me if they were cool. I just like...I can’t believe it, you know what I mean?”

The King Buzzo connection has led to another chance for Skinner to create, this time with Bob Hannam, director of Melvins documentary The Colossus Of Destiny, who will be joining forces with Skinner to make a film about Ron Turner, a legend in the underground comics world who Skinner describes as “the ones who started the whole thing in the ‘60s.” Turner is thanked profusely in Don’t Have Feelings, Don’t Make A Scene, which he also published through his San Francisco-based company Last Gasp (https://lastgasp.com/).

These days, Skinner has plenty on his plate -- a collection of show posters gathered in the book for bands like Faith No More and other Mike Patton-fronted group Tomahawk, Swedish rockers Graveyard, several Melvins dates, and more. His passion for music and culture still drives his work. When asked to give his best advice to other artists who share his tastes and creative ethos, his answer is much like his career: take control of your own experience and put more into what you love than what you expect back.

Skinner's new book, Don't Have Feelings, Don't Make A Scene, is out now via Last Gasp Publishing. Order it here.