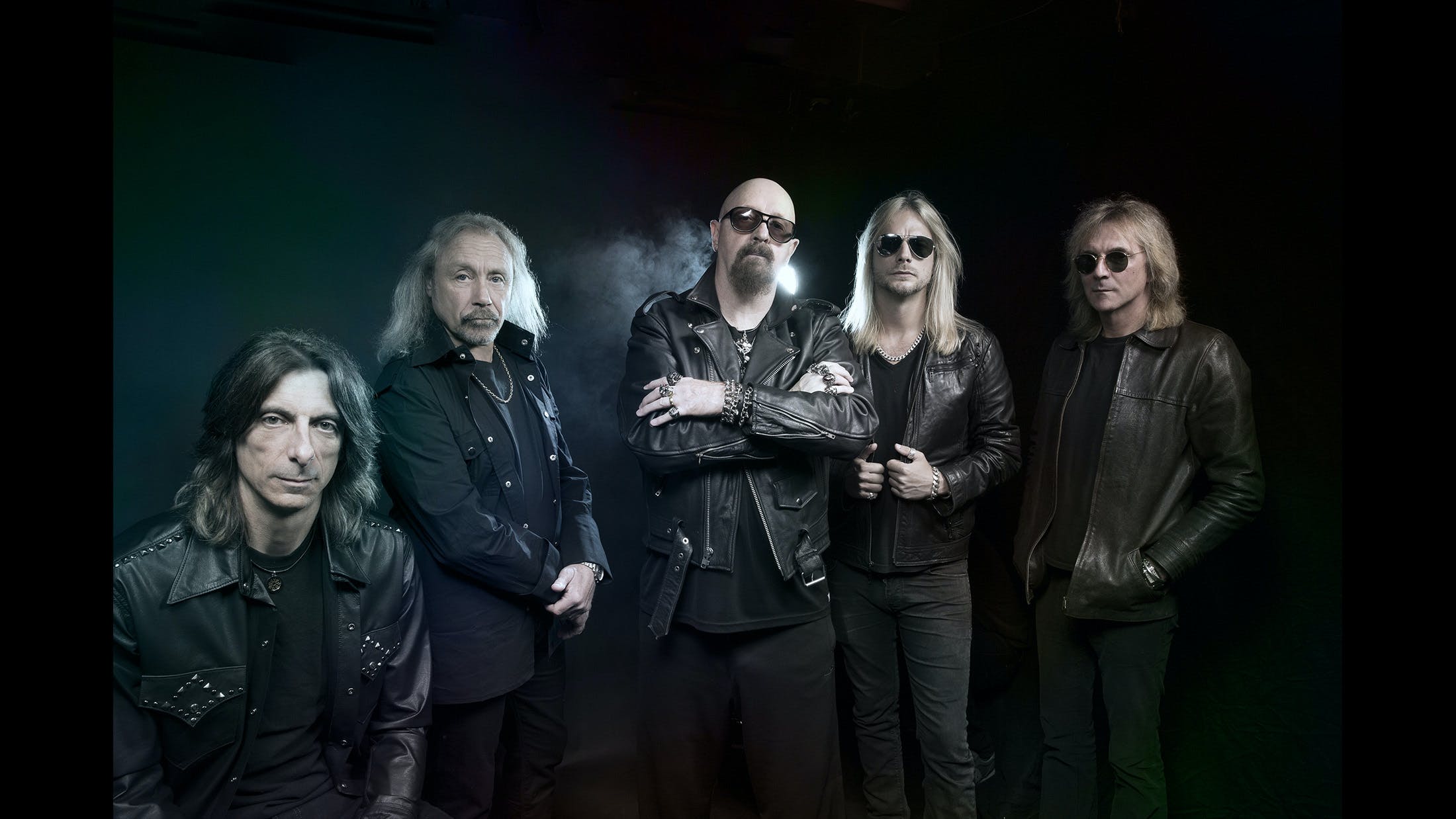 If you want a measure of Judas Priest, try this: on the day Kerrang! is due to meet with singer Rob Halford and guitarist Glenn Tipton in London to talk about the British metal legends’ killer new album, Firepower, a sad message comes through. Glenn will not be joining us today. Nor will he be taking part in Judas Priest’s forthcoming tour dates, a result of the development of Parkinson’s disease, a condition with which he was diagnosed a decade ago, but has never publicly spoken about until now [this is a reprint of a feature published in K!1712 on March 10].

But the statement bearing the news, while sad, is also filled with optimism, with hope. “I want everyone to know that it’s vital that the Judas Priest tour go ahead and that I am not leaving the band – it’s simply that my role has changed,” read Glenn’s words. “I don’t rule out the chance to go onstage as and when I feel able to blast out some Priest! So at some point in the not too distant future I’m really looking forward to seeing all of our wonderful metal maniacs once again.”

When Rob Halford and Glenn’s co-axeman Richie Faulkner enter the room at the band’s label offices, the news is the first thing they bring up in conversation. And it’s immediately clear that, while upsetting, it is not going to be allowed to block the road. The tour is going ahead with Andy Sneap – Firepower’s producer and guitarist with Brit thrashers Sabbat – filling in. The Priest juggernaut, proudly, remains on the road.

“It’s an emotional day, obviously,” says Rob. “And we’re happy that Glenn’s been able to make a decision that’s good for him, and the place that he’s at right now. Glenn’s thing was all about the band. But we insisted, ‘No, this is about you.’ It just goes to show you where his heart is at.”

It was only during rehearsals, 10 days before the announcement, that Glenn made the decision not to tour. The news was met not as a problem, but with all the love and support you’d expect.

When he told us, we all got together in a room, and it was a real family coming together moment,” reveals Richie. “We talked about it, and it was an emotional thing. But again, Glenn is very much with us every day. I know he’s gonna be creating new stuff. And when we’re on tour and he does come out, the fans are gonna go nuts, man! The response from fans has been really touching. It was a brave move for Glenn, but because of what he means to everyone in the Priest family, there’s been nothing but love.”

“For Glenn, the optimism, the hope and the positivity are absolutely vital,” asserts Rob. “Great things are happening all the time, in terms of medication and so on. The fact that he’s had this for 10 fucking years and never made an issue out of it shows how he’s not letting it get him down.”

The Metal God beams, defiant and proud of his friend’s strength.

“There will be another Priest album,” he states. “And I can’t wait to get to work on it with Glenn, quite frankly.”

Let’s not get ahead of ourselves, though, because Judas Priest have a lot going on in the present. Namely, the release of their new album, Firepower, number 18 in their almighty canon. A fully-charged dose of heavy metal power and domineering spirit, it’s as thunderingly classic as it is fitted with a razor-sharp cutting edge, at once dependably Priest and freshly pointed. And as if to hammer home that this is, in Rob’s words, “The best heavy metal we can make in 2018,” there’s a song on it called Flame Thrower.

“What’s more heavy metal than that?!” he hoots. Very little. In fact, it’s almost surprising that Priest don’t already have a song called Flame Thrower. Just as it was surprising – even to The Metal God himself – that on 2014’s Redeemer Of Souls, the topic of the Vikings entered the fray for the first time. But the fact that Priest continue to do firsts on Firepower, and set new benchmarks – Rob is delighted when Richie mentions that there’s a drum part in the title-track that’s faster than anything they’ve ever done – is part of the reason why, 44 years since the release of their Rocka Rolla debut in 1974, the band remain a truly revered force. Having made albums that shaped the very landscape of metal like Sad Wings Of Destiny (1976), British Steel (1980) and Painkiller (1990), their legacy is secure. Rob Halford has spent more of his life than not upholding the title of The Metal God. But while this glory is rightly lauded, that currently no album is as important to Judas Priest as Firepower means their relevance in 2018 is also assured.

“As a band you believe in what you’re doing,” asserts Rob. “It’s important that the story we tell is consistent, like everything we do. We set the bar for ourselves before we got into the Firepower sessions. The basic plot, if you wanna call it that, was: make the most classic, heavy metal Priest album we can. If you’re in the band and living it, you know exactly what that means. And the fans do, too, which is why they trust us.”

One thing that’s remained consistent throughout Priest’s tale, and something that’s a huge part of their character, is their unwavering backbone, of always striving to overcome, no matter how dark or how trying times can get. Rob is aware that, “Like Spider-Man, with great power comes great responsibility.” You’re not going to find him or his bandmates feeling sorry for themselves, even when dealing with the current difficult hand they’ve been dealt.

“I’m pleased you’ve referenced that, because that’s exactly what we’re about,” he smiles. “You take the power and the attack and the ferocity of metal, and you use it in a constructive, positive way. Music, no matter how you define it, makes you feel good. That’s what we’ve always attempted to achieve with Priest, and I think we’ve been consistent.”

In contrast with how the band keep pushing musical boundaries, the heart of Rob’s lyrics haven’t, but the context and the deployment have, and he’s always looking for new subjects to tackle.

“It really hasn’t changed that much,” he ponders. “I won’t say it’s been done before, because you can say every James Bond film has been done before, but it’s the way you reinvent – actually, not reinvent, approach – that gives it its validity and its original twist.”

Some fans have said this sounds more socially-minded. Is it?

“We’ve been everywhere on this album, haven’t we? We’ve got flamethrowers, lone wolves, voodoo…” he enthuses. “I don’t think it’s more politically slanted – I just think people are listening closer, which is great!”

Priest’s passion and lust for life is infectious. Rob says they take very little time off, and that he gets “terribly bored” if he hasn’t got something to work on. Discovering new music keeps him inspired, and as he chats he namechecks the likes of Power Trip, Electric Wizard and Behemoth. He gets noticeably excited when he learns that Emperor – “One of my favourite fucking bands ever” – will play before Priest at Bloodstock in August.

It’s this love for music that keeps Rob young. As ageless as he seems, at 66 he isn’t as youthful as the man who held up a bank with guitars in the Breaking The Law video. But if he wasn’t feeling it, he wouldn’t be here.

“If I didn’t still love it,” he smiles, “I’d knock it on the head. I can’t wait to walk up that ramp and get onstage. Playing live is the most important thing in the world.

“Of course some nights you’re not quite on fire,” he continues. “But then I think, ‘Stop fucking moaning, you should be grateful.’ What’s not to be excited about?”

Hello, is that adversity? Judas Priest have got a flamethrower for you.

Firepower is out now on Columbia. You can stream it below. Judas Priest headline Bloodstock Festival (August 9-12) at Catton Park, Derbyshire. For tickets and more info click this link.