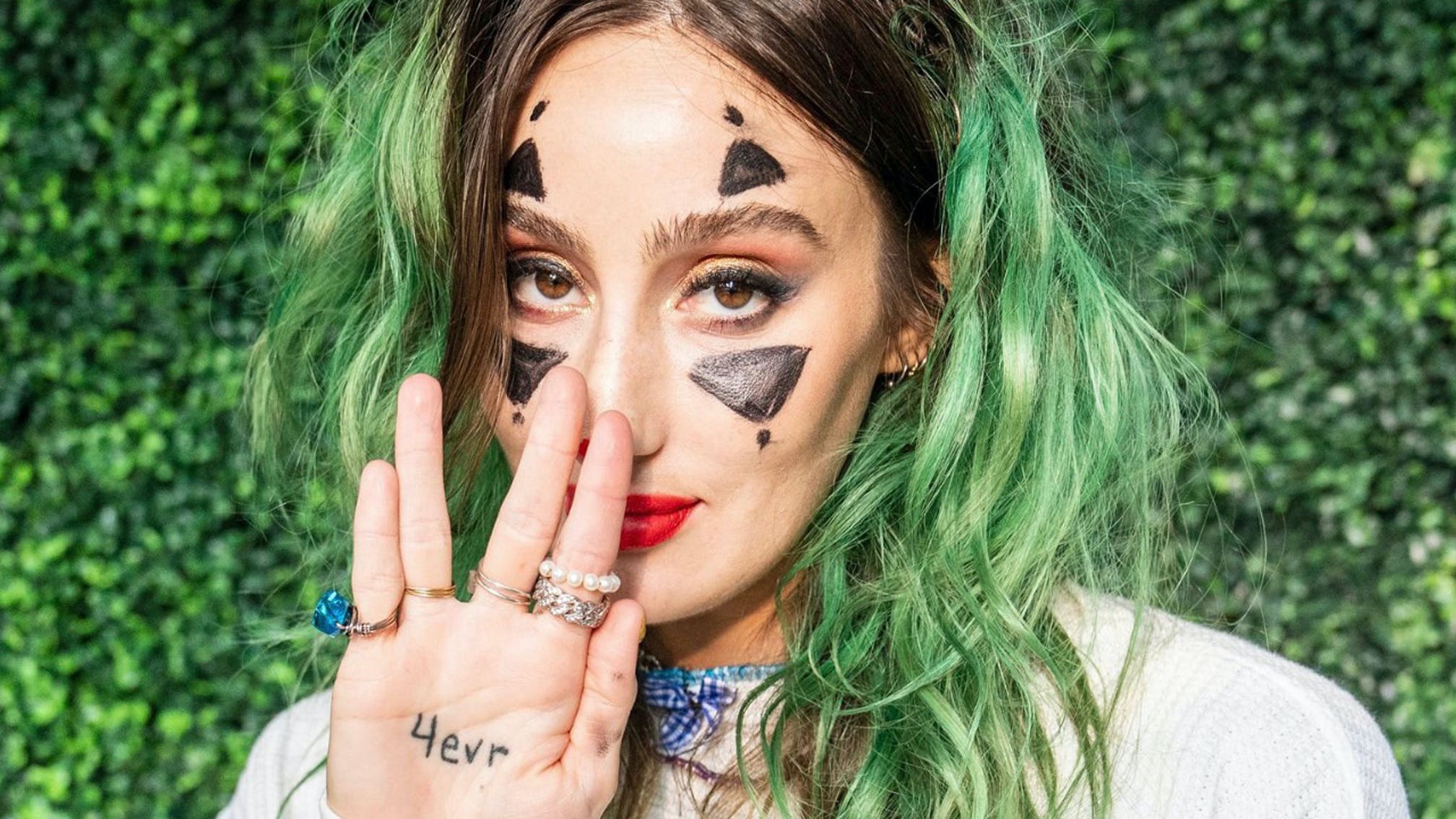 Some artists happily thrust themselves into the spotlight, while others need a little nudge. And phem, LA’s weirdest, most exciting new alt.pop star was definitely the latter. A drummer growing up, she’d be perched at the back of the stage keeping time for those up front, and, while fun, it left the high school poet with a “craving” to contribute to both words and melody. So, when a producer friend invited phem into the studio, to put down the sticks and pick up pen and paper to start writing for other artists, they jumped at the chance.

The first track she ever appeared on as ‘phem’ was G-Eazy's Just Friends, released in 2017. They’d sung some temporary vocals on the hook, but it sounded so good that it was decided to just keep them on there.

“At the time, [the thought of] being in the spotlight was really stressful, the pressure of people having expectations of me,” admits the 24-year-old, who has since collaborated with the likes of Tom Morello and Machine Gun Kelly. “But when it happened so naturally, I was like, ‘Okay, this isn’t even my decision anymore.’ This is something I felt really called to do, and I still feel that way.”

And while phem admits that being a musician still feels like “a lot” and something she’s not sure she can handle, having an alias – a name she picked because it’s “cool and cute”, represents the fact they’ve always been the ‘fem’ in relationships with women, and because it sounds weird and gross like ‘phlegm’ – certainly helps.

You might not guess it from lyrics about fucking women on coffee tables (check out the song Sorry Mama) but phem is inherently shy, and would be “destroyed” if people’s negative opinions were directed at her personally.

"I do have a lot of sexual references in my music and I’m a pretty sexual person,” explains phem, whose she/her and they/them pronouns are interchangeable. “I’ve been with men… I’ve been with women… I’ve been with people, and I feel like with this whole ‘free’ sexuality movement, we’re supposed to be open and accepting, but there’s a lot of people who like to gatekeep certain titles (laughs).

“So many people are adoring what I’m doing,” adds the singer, who has put out a handful of EPs and is currently touring the U.S. with Waterparks. “But there are stragglers that throw [insults] at me that I happen to see and internalise. That's something I really need to work on.”

The trolls are easily outnumbered, though, by the fans – referred to as The Phemily – who connect with and adore phem precisely because she is so frank about sexuality.

“There's always someone after the show who comes up to me and is like, ‘I just came out to my mom!’ or, ‘I came out to my dad and this is how it went.’ I had two girls the other night, and they said they came out to their mom, and the mom was really not about it, but then a little while later the mom came out to them,” phem laughs. “I love that!

“I talk a lot about my coming out story and I also try to talk about relationships with parents, and how a lot of parents aren’t cool with it, but it’s okay, they’ll come around eventually. And if they don’t, that’s their problem…”

The singer is talking from experience since her own coming out story wasn’t a fairytale.

“My mom was in shock… she just couldn’t believe it,” phem remembers of the day they took a girlfriend home and just hoped for the best. “It really, really hurt her – it was a year of her crying, and saying, ‘No this is not you, you gotta think about this…’ And it was painful. It really hurt me, because you always want your parents to love you no matter what and be accepting of you. It was the first time in my life where I had to decide if I wanted to live my life the way that my mother wanted me to live it or myself. I still feel a little sad about that, but we’re cool now and I know she’s very proud of me.”

Ironically for phem, who always thought they would settle down with a woman, she’s currently dating a man (American musician and star of MTV’s Teen Wolf, Tyler Posey). And she’s so into him that last month she released her first-ever love song, the thoroughly infectious Silly Putty.

“I don’t really write love songs,” phem explains. “Maybe I just haven’t felt in love before? I don’t wanna write a love song just to write one, there’s already too many!”

Are you in love now?

"Yeeeeeeeeah… I am,” they say coyly. “I think that’s what this feels like, anyway! I don’t know if I’ve ever experienced this feeling, but I’m definitely with someone that made me write a song about being with them, and I’m very happy in the relationship that I’m in right now.”

The pair are pretty inseparable at the moment too, with phem appearing on Tyler’s track Shut Up (also featuring Travis Barker) and Tyler accompanying her on the Waterparks run (while we chat, the couple are roadtrippin’ through the Arizona desert in an RV).

And if scheduling allows, he’ll no doubt be jumping on a plane to accompany her on a (soon-to-be-announced) UK tour next year, where we’ll hopefully be hearing some new material. “I'm really excited by the response to Silly Putty,” phem says. “It makes me wanna hole up and write a bunch more ‘superhero music’ – that’s how I like to describe my sound. It’s filled with truth and emotions, but it’s inspiring and pumps you up when you listen to it.

“I want to keep making music that’s raw and real,” she continues, when asked what she’d like to achieve in 2022 and beyond. Before pausing, and adding sweetly: “I just want to touch people and help them feel better when they’re alone.”

Certainly sounds like superhero material to us. Now, just to keep phem away from Thanos…

Silly Putty is out now. phem will hit the UK next year for a headline tour.

phem shares infectious new single, never goes down like that

phem and Ezekiel team up for the moving, relatable never goes down like that – listen now.

“I guess it’s the feelings of hopelessness and the simplicity in which I describe it,” says phem of how watery is already resonating with fans.