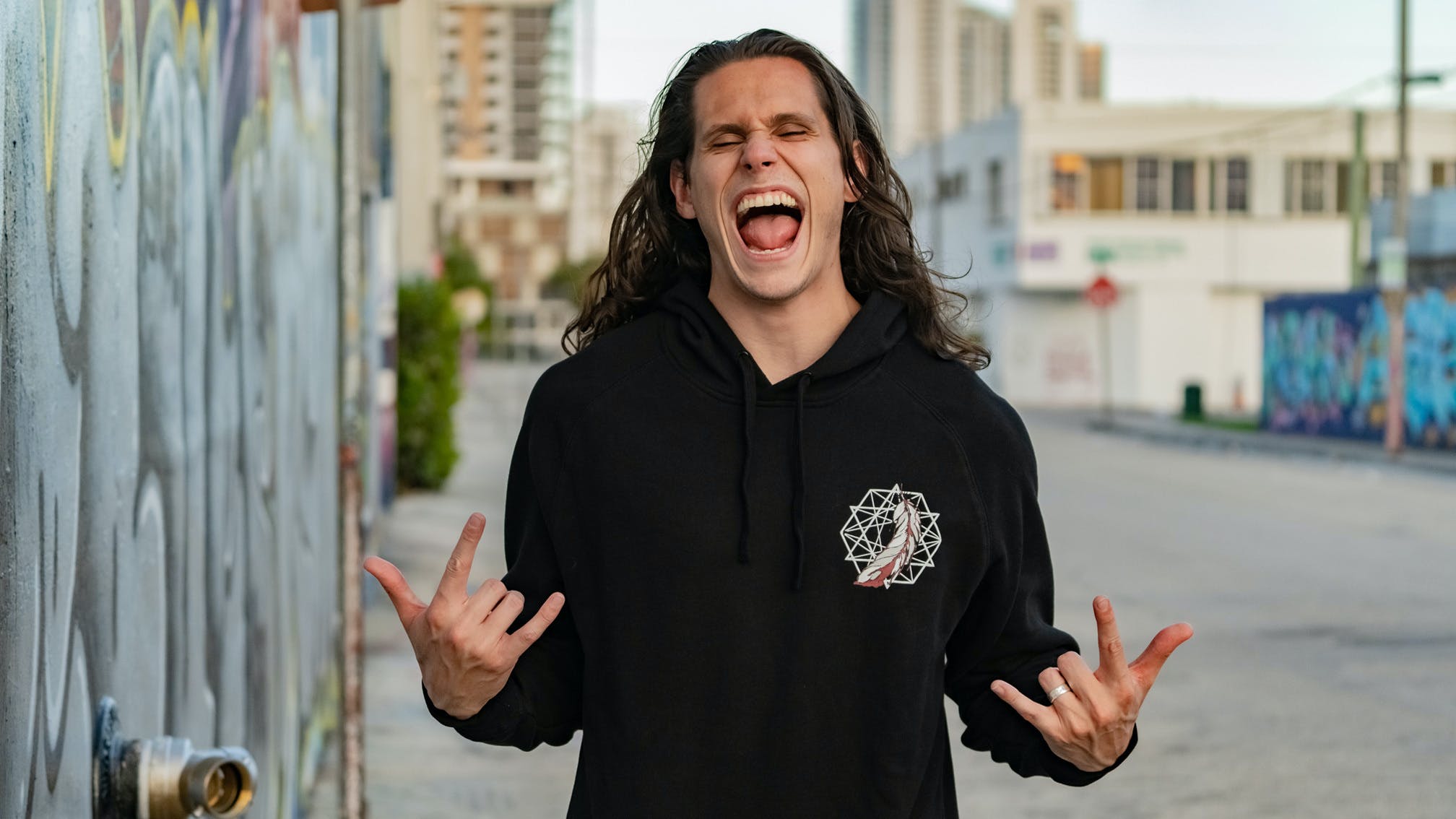 “First it was Green Day and The Used, and then AC/DC and Van Halen. After a year or so of playing the guitar I realised how much I loved classic rock, and that grew into a fondness for the ’90s scene and bands like Pearl Jam.” Keaton Prescott – better known by his stage name Sullivan King – is recounting his earliest musical idols. For most 20-something rock stars, the names he reels off would be a pretty standard list of influences, but Keaton isn’t your average bloke in a band. Rather, he’s a DJ and EDM artist whose music has as much in common with Skrillex and Steve Aoki as it does the kind of artists regularly featured by Kerrang!.

After finding himself without a band in the early 2010s, Keaton began making music on his laptop, feeding off the energy of an EDM scene that was about the crack the mainstream. Fast-forward to 2020, and following a number of collaborations with notable electronic artists including Kayzo and Riot Ten, he took the decision to team-up with a host of rock musicians in order to combine his dance music with a metallic crunch. Over the past 12 months he’s released the track Dark Love with Underøath’s Aaron Gillespie – “I grew up loving his band and really appreciating his music – he was great to work with,” Keaton says – as well as Venomous, which features Ice Nine Kills’ Spencer Charnas. DOMINATION, an intense, rock-leaning song recorded with Papa Roach, dropped in mid-April.

The reason for making this music is, according to Keaton, something that stems from his desire to build on the foundations laid down by his favourite metal bands, as well as a belief that rock and EDM can exist alongside and even accentuate the qualities of one another.

“You obviously have the guys who’ve been doing dance-meets-rock stuff forever, like The Prodigy and Pendulum,” he explains. “But I really picked up on what I See Stars, The Devil Wears Prada and even Slipknot were doing, where they had these electronic and industrial elements running in the background of their music. I couldn’t, however, see someone who was really owning that sound, like a single artist that was screaming, playing guitar and creating heavy-metal driven bass music. I thought, ‘If no-one else is doing it, I might as well do it myself see what happens.’ It all developed from there, and I think I’ve done alright!”

More than that, Keaton is steadily making a name for himself as the DJ when it comes to EDM-metal crossovers. His latest such venture in this regard is an exciting collaboration with FEVER 333’s Jason Aalon Butler, who lends his talents to Sullivan King’s upcoming single LOUD. True to its title, it’s a barnstorming, riotous track that blends Keaton’s trademark heavy electronica with Jason’s inimitable vocals. ‘Let’s get fucking loud!’ is the lyrical hook that underpins the song, and it’s something that reflects the enthusiasm Keaton has for this newest project.

“Getting to work with Jason is something I've wanted to do for literally 10 years,” he says. “As long as I’ve been playing guitar I’ve been a huge letlive. fan. I think I saw them at one of their last shows at the Self Help Festival in San Bernardino; I crowdsurfed to the stage and traded picks with the guitar player, and now I have it framed in my bathroom. It's so fun to get to work with these people who have had such an influence on my sound.”

As well as FEVER 333, Keaton cites Bring Me The Horizon, I Prevail and Beartooth as three rock bands he’s really enthused about right now. As someone with a wealth of technical knowledge when it comes to the theory of music – “I could bore you to death with all the stuff about what key a rock song has to be in in order for me to make a good remix of it,” he says – and having something of an outsider’s perspective on the current metal scene, he argues that it’s those artists who are able to take a step back, reign things in and understand who they are as musicians that will succeed.

“You don’t always have to reinvent the wheel or try to do the new, hot thing,” Keaton says. “That new Bring Me record [Post Human: Survival Horror] was the best and most inspiring thing I’ve heard in ages. It’s particularly cool that during COVID these guys went in, wrote a record that was true to themselves, smashed it, and it ended up with something that sounds fucking awesome.”

Full of praise for others he may be, Keaton can also rest easy in the knowledge that he too is harnessing the qualities he has in order to breathe new life into the notion of a dance-metal revolution. Put it to him that he has the potential to be the man to bring those two worlds together, and he’s humble in his assessment, but also insistent that there’s plenty more to come.

“Being seen as someone bridging these two genres which I love is everything I could ask for,” he concludes. “It's really humbling. Spotify recently created this playlist called ‘Rocktronic’ for which I’m on the cover, and seeing my name and that label applied to my music is so dope, because that’s exactly what I do. I guess you can call it whatever you want, but regardless, I’m going to keep doing my thing and carry on taking electronic music into rock and metal. This is what I love to do, and it’s amazing that it’s what my life has become.”

Sullivan King will be touring the U.S. later this year and in 2022. See dates and grab your tickets here.