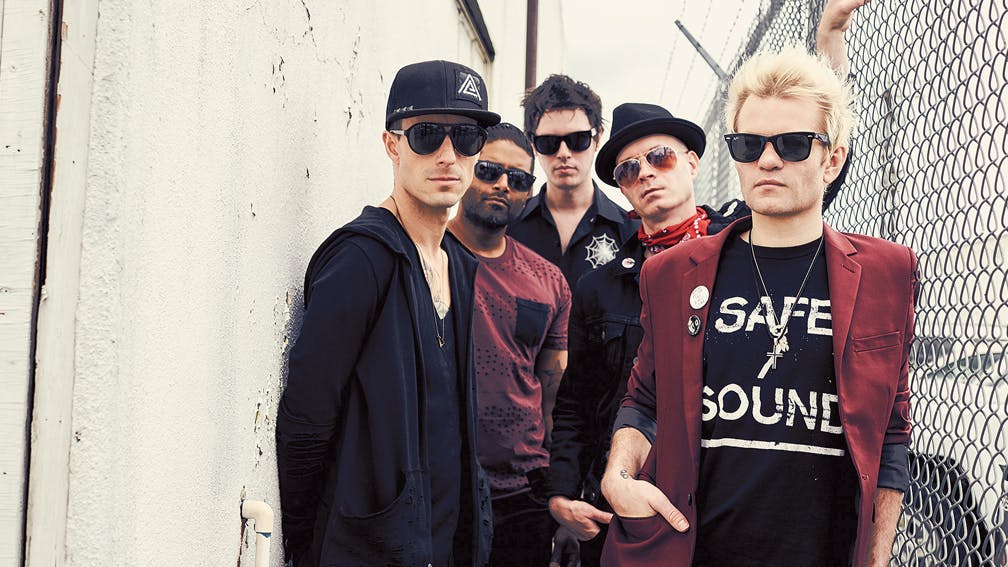 Part of what made Sum 41 the massive success that they were was a sense of devil-may-care hilarity that came with the band. While plenty of other rock acts tried to seem either boyishly cool or scarily edgy, Sum 41 came off like a couple of dirtbag skaters who might put a dog deuce in your bunk bed or sled down a hill on a blow-up doll. Now, the band have revealed that during the recording of their smash hit debut album All Killer No Filler, they went a few steps further than trashing a hotel room -- 20 stories further, in fact.

In the latest episode of Inside Track, our podcast in which rock's biggest names tell the insane-but-true stories behind famous moments in music history, Sum 41 bassist Jason "Cone" McKaslin revealed that while recording their debut, the band decided to take some mushrooms and party in the suite of producer Jerry Finn. The result was somewhat disastrous.

"Jerry liked to party, and we liked to party, so it was a crazy time," recalls Cone. "He had this hotel that backed up to this famous Toronto strip club called The Brass Rail. So we were constantly going there every day, or a couple times a week at least...I remember one night we all went back to Jerry’s room and we were all doing mushrooms and I think Jerry just decided he was gonna go to bed. He said we could stay...and he had a suite, so he just went to his bedroom.

"The sun was starting to come up, and we decided we wanted the couch out on the balcony to watch the sun come up," says Cone. "So we were trying to slam this couch through the door of the hotel, and it wasn’t fitting. So we had to take the feet off it it, slammed it through the door. And we basically just threw those off from 20 stories up into the parking lots where cars were. And I remember Jerry waking up and losing his mind. Like, 'WHAT!?' He basically screamed at us like a father. We had basically kind of trashed his room as well...The other couches were turned upside down, tables were on their sides. It was like a bomb hit the room...and it was six o'clock in the morning.

READ THIS: Sum 41's Deryck Whibley: The 10 songs that changed my life

"He yelled at us so hard," laughs Cone. "And when you’re on mushrooms any little thing can set you off, good or bad, so we all got really upset about it. He went back to bed, and we wrote him a little note about how sorry we were and stuck it under his pillow and tiptoed out of his room."

"And then we went into the studio and recorded the next day," says Cone with a laugh.

If you dig that, make sure to SUBSCRIBE to Inside Track to hear more of the insane, wonderful, highly-unlikely and totally true stories behind some of the greatest moments in rock history: