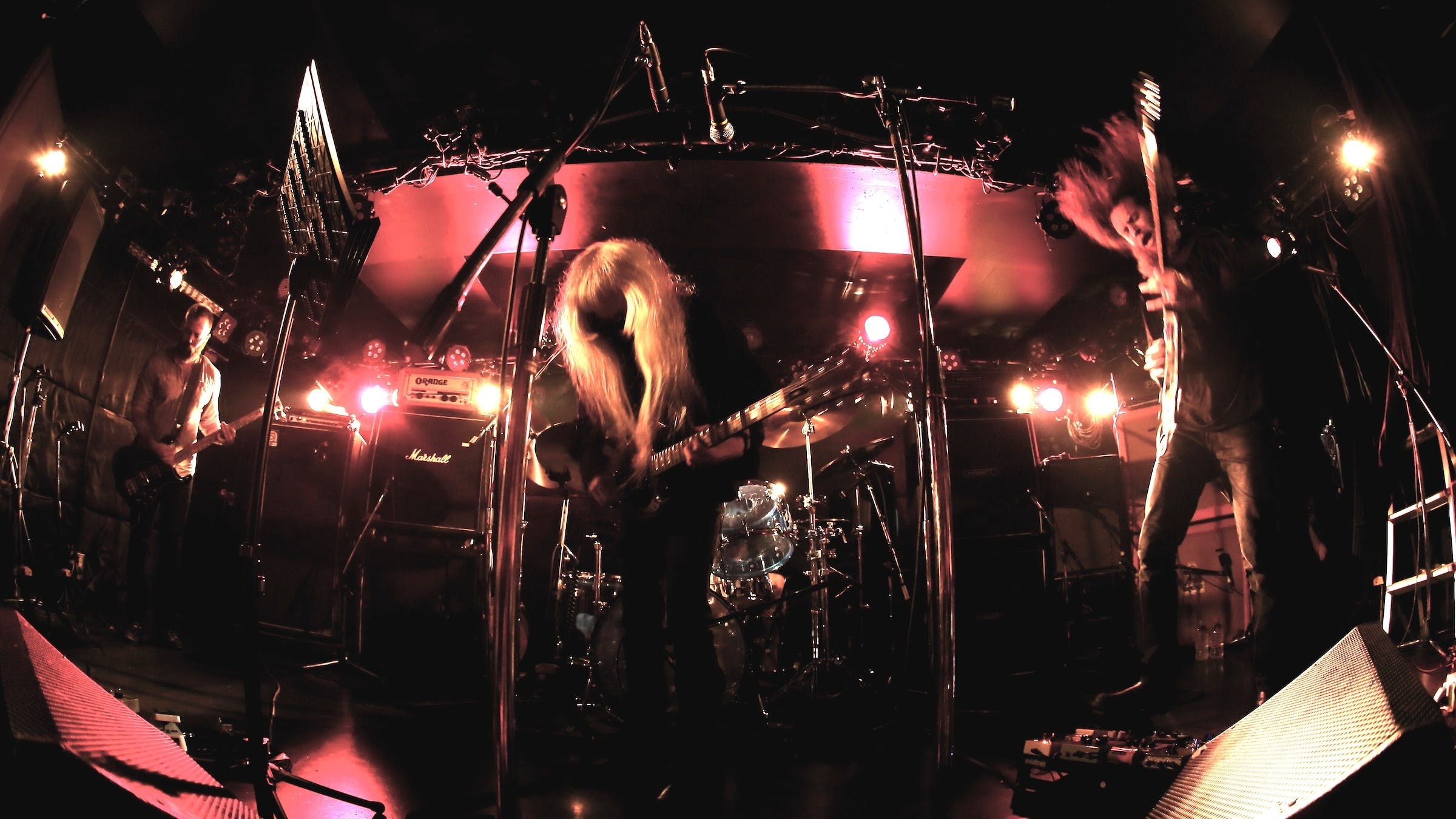 Given his tenure as the frontman of post-metal pioneers Isis, Aaron Turner obviously has some weight in the experimental music community. That said, his current band Sumac -- a beautiful, bludgeoning sludge outfit that's easily one of the 50 best American metal bands from the last ten years -- comes off a little stony and metallic to be considered fertile ground for unorthodox, improvisational music. And yet the band's new album, a meeting of the minds with psychedelic drone musician Keiji Haino, not only shows that Sumac can hang with experimental royalty, but also that their crushing sound might be the perfect backdrop for freeform collaboration.

The album, titled Even For Just The Briefest Moment Keep Charging This "Expiation" Plug In To Making It Slightly Better, is four sprawling tracks of ominous, atmospheric music that ranges from eerily dissonant to noisily disturbing. That it came out of an improvised jam is exciting; that it's born of Sumac joining forces with one of psychedelic music's weirder minds is just awesome.

We caught up with Aaron about his work with Haino and what it means for Sumac going forward.

It was definitely us approaching him. I had been following his music for a good many years and it hadn’t occurred to me ever to ask him to collaborate until maybe three or four years ago. Initially, it was just sort of a whim -- not that I didn’t really take it seriously, but I didn’t expect it to happen. He hasn’t ever, to my knowledge, collaborated with a metal band, and I don’t know him at all, although we have friends in common. So, it was really just a shot in the dark and I was expecting to get turned down, but we proposed a plan, or at least made our intent clear, and after some conversation, we agreed to work together, or at least to give it a try to see what would happen.

Do you feel it was the kind of music Sumac makes that made this project possible, or was it just about finally saying, ‘What if we contact Haino?'

No, it was definitely because of what we do with Sumac. There have certainly been other projects I’ve been involved with that have an open enough format to allow for this kind of collaboration, but Sumac, specifically, has been geared towards incorporating improv and freeplaying into our work from the very beginning. It's just taken time to figure out how to integrate it more fluidly, to really maximize our potential that way.

Sumac is such a brutal, fearsome band that one might think of their music as highly regimented. But it sounds like working with collaborators and opening Sumac up to experimentation has always been on your mind.

Yeah, definitely. And even on the first record, [2015's The Deal,] there were passages that were completely open and left to constant reinterpretation. So, even though a lot of the structures that existed around those parts of the songs were, as you put it, very regimented or rigidly structured, there was plenty of room to depart from there and explore more open space, and then return to the architectural and intentional forms.

Do you feel like the album with Haino is Sumac playing a song with Keiji playing over it, or was the process and what you got out of it collaborative the whole time?

It was definitely very collaborative. I think to some extent we deferred to him to lead it, partially because he’s just a more experienced musician. He is definitely more adept in the realm of improvisation than we are, and it was us coming to him. So without reverting to being his backing band, we definitely did allow him to steer the ship. That said, in a recent discussion we had with him in May, when we did another live collaboration with him, he wanted to emphasize the idea that we become a fully integrated unit, neither Sumac nor Haino. I think that’s kind of been the goal all along -- finding a middle ground that we can all occupy simultaneously and forge something new as a cohesive unit rather than just trying to graft our respective worlds onto each other.

Was there ever a moment on the album, working with Haino, where you were just blown away at the fact that it was happening, or you heard it later and thought, ‘This is amazing?

In the moment that it was happening, I gotta admit, some of it was riddled with panic -- not so much because of who we were playing with, but just because it really was a step into completely unknown territory. And there was a part of me after this record in particular, when the performance had ended and I stopped playing, that felt more bewildered than anything else, and kind of wondered what had happened.

It wasn’t for quite some time after that I actually got around to listening to the recordings, mostly because I wanted to have some removal from the experience and be able to go back to it with a more objective viewpoint rather than just stepping away from it and still occupying that space and anxiety. When I got around to listening to it again, I was very, very pleasantly surprised, because what I heard felt way more fluid than what it had felt like a lot of the time we were playing together.

Just out of curiosity, that sort of panic and in-the-moment anxiety -- in retrospect, was that a good feeling, cathartic and productive? Or was it truly unpleasant?

No, I don’t really care to revisit that. At the same time, I don’t want to shun the experience -- I think that anything that happens through the course of playing is valid and something to be learned from. But, for me, I definitely want to become more relaxed with the process of improvising. I want to get out of my head and more into my body and spirit, because I think that’s where the real rewards from improvising come from. If I’m thinking too much, it takes me away from the present experience and doesn’t allow me to really become telepathically linked with those around me, and I think that’s the ultimate goal. And that is something that happened at points during that session, and it definitely happened to the session prior to the one for this record. I think we, as a band, need to do it more and more, to become more comfortable with the process.

Well, I’d like to continue doing this with Haino actually, because I feel like we’re starting to develop a rapport with him. I mentioned we played another show with him a couple months ago, and we had a long meeting before playing the show, reflecting on what we had done previously and what we wanted to do differently, and also just trying to become comfortable with each other as people. I think that that’s the huge factor when it comes to improvising together -- to just feel like you’re on a friendly level with everybody involved. So, I think that, for us, this process of playing with Haino has been an absolute learning experience, and I feel like what we did with this most recent show was another step up in terms of quality, in terms of experience, in terms of connection amongst the players.

Beyond that, I would say that we definitely intend to keep the door open with Sumac and write future collaborations with other people. I think that dismantling the idea of what a standard rock band should be or can be is part of our underlying ideology. There’s not any specific sessions or shows at the moment with anybody else, but it is an ongoing interest for us. We played, this past year with another person whose music I’ve enjoyed for many years, Caspar Brötzmann. We played with him in Berlin and then again at Roadburn in Tilburg, and I wouldn’t say that either experience rendered the results that were, you know, us operating at our full potential, but I think that they set a good precedent for the possibility of working together again.