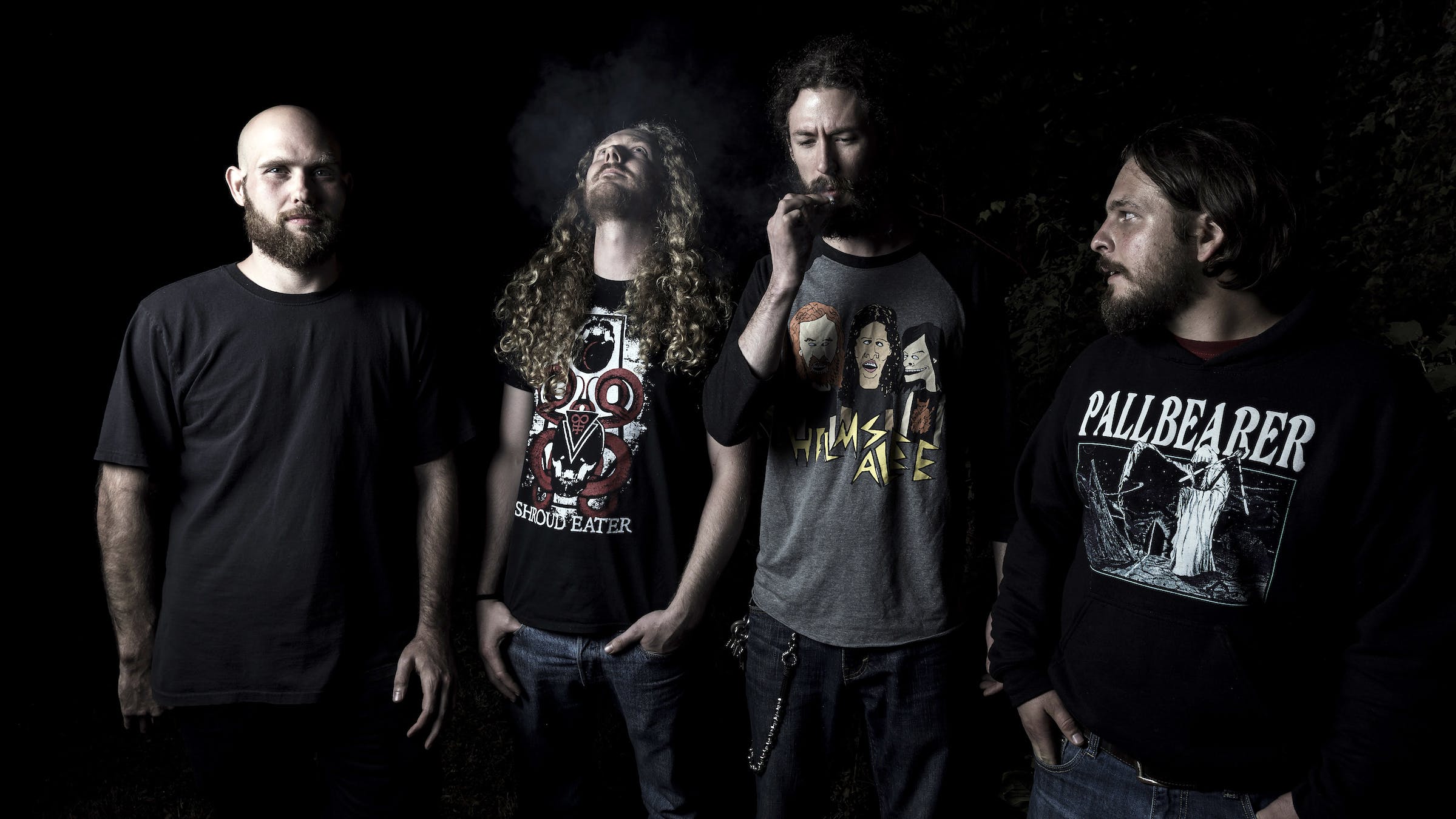 Listening to the music of Arkansas stoner-doom crew Sumokem, one can’t help but think of smoke. Maybe it’s the way their chocolatey riffs and steely guitar solos seem to billow and twist in the air; or how their mixture of guttural growls and sonorous clean vocals evoke visions of ancient rites held by shamans of forgotten eras. Maybe it’s just that the band are inveterate potheads whose albums examine cannabis’ role in old-world civilizations. Whatever the reason, the band’s music has all the strange magic and power as a thick cloud of mystical marijuana smoke.

Sumokem’s debut full-length album, The Guardian of Yosemite, is a powerful distillation of their hazy -- yet powerful -- sound. In it, the band focuses on Native American mythology with a collection of weighty doom metal anthems to war pipe rituals and peyote cacti that would leave any fan of Sleep and Khemmis banging his or her head and begging for more. If you want proof, go to our Facebook page at 3pm EST on Thursday, September 13th, and watch our stream of their live performance at Brooklyn’s Saint Vitus Bar.

True to form, Sumokem frontman Jacob Sawrie sounds a little -- ah -- smoky when I reach him on the phone. But even with his chill demeanor and calm tone, the vocalist and guitarist seems to be deadly serious about Sumokem’s music and subject matter, including weed. For Sawrie, walking that line between professional and relaxed is vital to keeping a band going. “I mean, you have to have that balance,” says Sawrie. “You have to be continuously working and pushing yourself creatively and as a musician. But you’ve gotta be friends also. You’ve gotta be able to hang out. Or you’re not going to make it on the road.”

How does a Sumokem song begin? Riff first? Concept first?

I’ve written all the music for the first couple of albums. I write the story and lyrics first, and to some degree I try to write the music around the tone of that song. With the new album, with Tyler [Weaver, lead guitar] and Dustin [Weddle, bass] on board, we’re writing together quite a bit more. You’ll definitely be able to see that in the next album—it’s going in a lot of directions that we’ve never touched before. I started the story, but having four people in a room writing together opens all of our creativity quite a bit. You write a couple albums in a couple of years, and you start to feel like you’re running out of riffs, so it was also a lot of pressure off of me when they came in and started writing.

Is the writing process a serious affair for you guys? Do you isolate yourselves, or just hang out and jam?

It’s a little of both. We definitely spend a lot of our rehearsals just hanging out, but when we’re writing something, we’re pretty serious about pushing ourselves until we’re brain dead sometimes.

Sumokem’s sound contains both grinding doom and ecclesiastical heavy psych. Is finding that middle ground hard? Do you prefer one sound over the other?

I don’t know if it’s just that I get bored playing one kind of music, but I’m constantly writing in multiple styles. If anything, we’re just going to go in more and more directions. We’re all super into a lot of different stuff. Tyler has a jazz trio on the side. So we’re listening to everything from that to extreme metal, which is what Dustin and I are really into. We want to throw as many influences in as we can. It’s something that you have to do these days, if you don’t want to bore people.

Is there anything you’d never include in Sumokem’s music?

The Guardian of Yosemite is entrenched in Native American folklore. What inspired you to focus on that specific time in history?

It’s not just that one time in history. Our first EP [2013’s The Madness of Lu Chen Ti: Vol. 1] was part of another concept album about ancient China, and our next one is going to take place in ancient India. I’ve always been fascinated by old cultures and mythologies, so I always set out to do some research into those before writing lyrics.

That’s interesting—China and India are known for having cultures that go back thousands of years, but we often consider America ‘young’ as a country. What inspired you to go back to America’s ancient roots?

It all starts with the stoner concept. They’re all kind of intertwined. With the China album, I was looking at their medical use of cannabis throughout Chinese history. So with this album, I started with the concept that Native Americans used marijuana. And once I found out that that wasn’t there, I had to start looking into their various mythologies, and a couple of their stories in particular stuck with me.

Are there other cultures you’ve been studying in terms of marijuana use?

After India, I want to get away from the stoner concept album thing, at least temporarily. The next album has a lot more philosophical elements, and I’d like to go more in that direction for the time being.

For each album, do you focus on different forms of marijuana? I know the medicinal weed used in China was different from the hash consumed by dervishes in India…

Absolutely. Especially in our newer album we’re working on. It’s all based on this Indian warrior discovering bhang, which is a weed milk. There’s definitely a lot of forms that I’ve learned about and read about. As far as Guardian of Yosemite, the song War Pipe/Rite of the Calumet is actually about a pipe ceremony. I discovered that the Native Americans did smoke tobacco with different herbs in it, and they had pipes for all different occasions. We know the peace pipe, but they also had pipes for war, pipes for celebration, things like that.

What about you? Do you do have different pipes for different occasions or moods? Do you have a ‘peace bong?’

Not physically. I definitely go into the situations in different mindsets. It actually makes me think that I need to up my collection!

Sumokem's latest album, The Guardian of Yosemite, can be purchased here.

States of Metal: Arkansas Has An Honest DIY Ethos And A Vortex of Darkness At Its Core

Metal in The Natural State is all about working hard, spreading the love, and surviving the dark night of the soul.