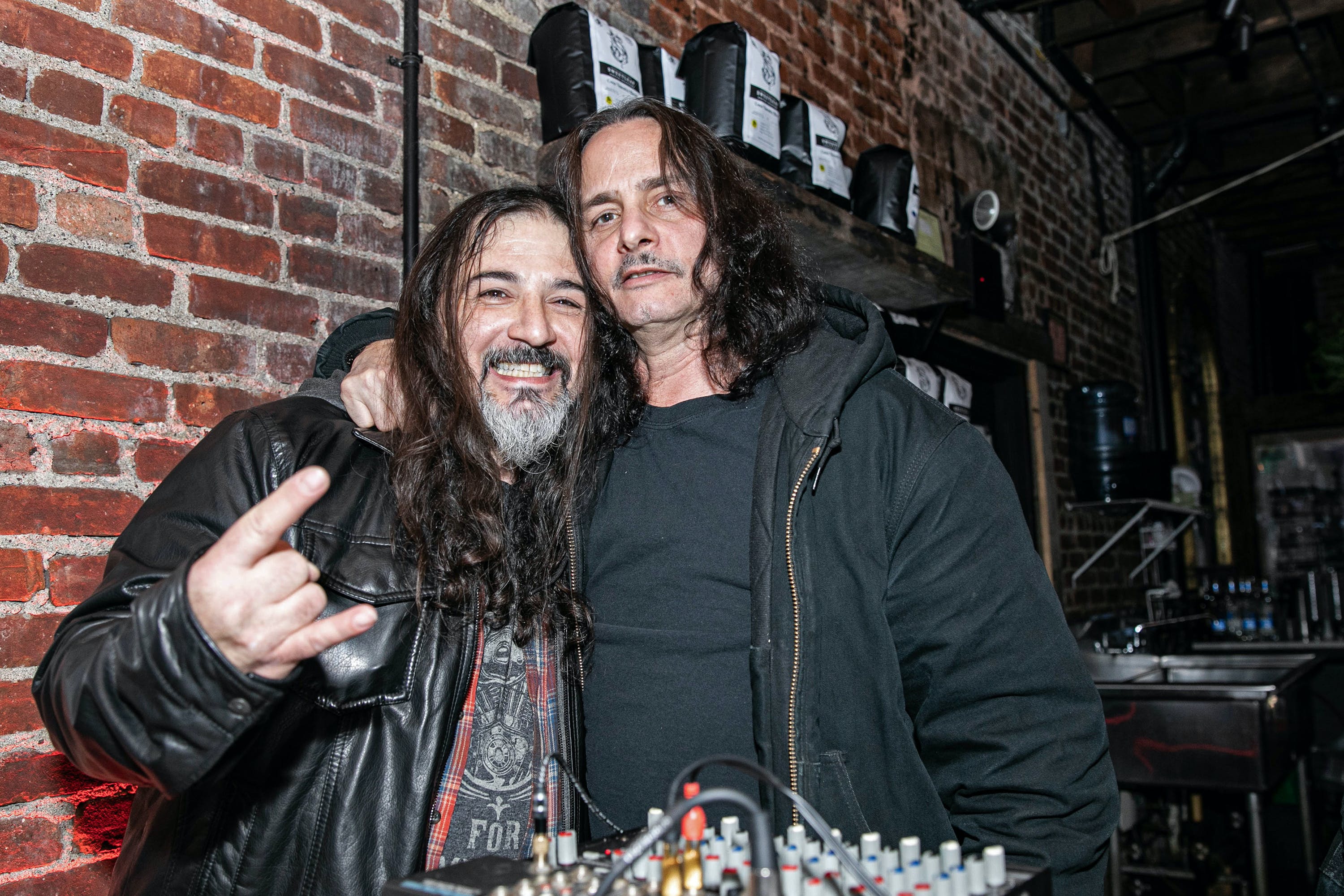 It’s a cold, rainy night this Friday the 13th of December, with the streets of Brooklyn’s Greenpoint neighborhood relatively empty. As such, it’s the perfect setting for a hot mug of coffee and depressive doom metal -- both of which are the order of the hour at Sweetleaf Coffee Roasters.

The metal-oriented New York coffee purveyors have joined forces with Kerrang! this evening to pay homage to the gods of all things shadowy and excitable, Black Sabbath, in honor of the 46th anniversary of their classic album, Sabbath Bloody Sabbath, and the 71st birthday of their founding frontman Ozzy Osbourne. And given the enduring power of Sabbath (and former members of Type O Negative spinning guest DJ sets) plenty of the Devil’s own traversed the inclement weather to pay their undying respects.

The interior of Sweetleaf’s Greenpoint outpost (the local coffee franchise's fourth location) is all warm wood and marble, adding an old-world pub vibe that goes well with the evening’s music. The menu also gives Sabbath their due, with three custom cocktails crafted by Sweetleaf’s cocktail bar that reference the band’s catalog: Ironman, a smoky mixture of mezcal, amaro and coffee; Into The Void, a combination of bourbon and coffee liqueur that packed a bass-drum punch; and Snowblind, a ginger-infused vodka drink that added a bit of Christmas flavor to the gathering. The cafe was soon packed with black-clad guests mingling in caffeinated glee and taking in the night’s gloriously gloomy soundtrack.

But it was the evening’s DJs that drew the most attention. The night featured Sabbath-inspired sets by members Kenny Hickey (now of Silvertomb) and Sal Abruscato (now of A Pale Horse Named Death), former guitarist and drummer, respectively, of Brooklyn goth metal legends Type O Negative.

Each played a unique list of Sabbath classics, as well as tracks by artists whose own syrupy darkness felt appropriate to the evening’s theme: Sal plays a song by his current outfit, as well as multiple tracks by Richmond riff merchants Windhand. And Perhaps the most memorable moment comes when Kenny treats the crowd to Elvis Presley’s classic Can’t Help Falling In Love With You, inspiring the gathered masses to sing along in an a cappella chorus when the music momentarily cuts out.

The evening is capped with the cutting of a Black Sabbath tribute cake, baked and designed by local cake studio Milkmoon Kitchen. The satanic confectionary features mocha-caramel buttercream, topped with a design of Black Sabbath mascot Henry.

Buzzed, stuffed, and inundated with doom, the crowd heads back out into the storm, warmed by drink and good humor as though by the fires of Hell.