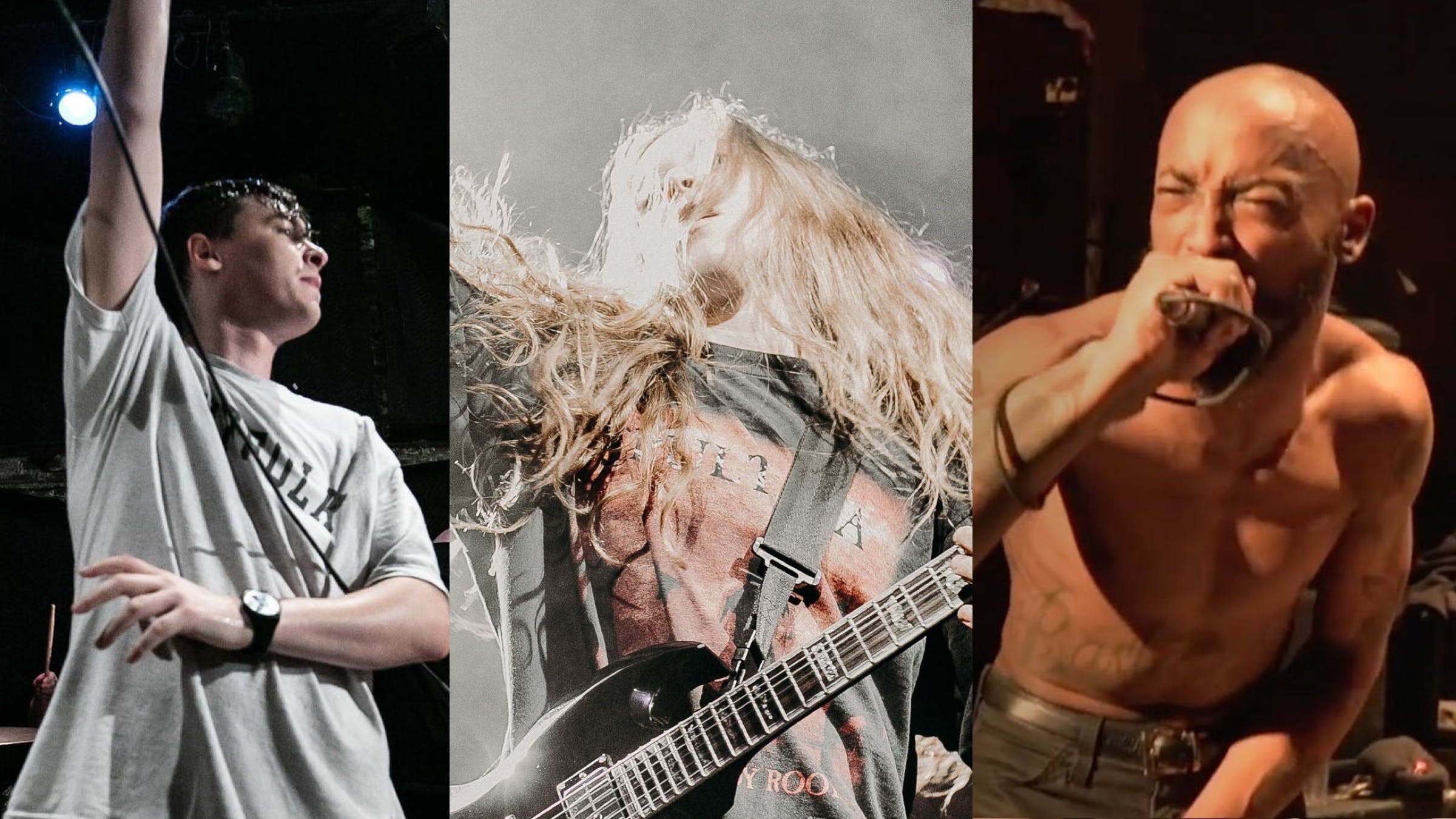 Since the quality of a hardcore band is judged by the effectiveness of their live show, being a hardcore frontperson requires more than just proper vocal technique. You need to have the right type of charisma and an attitude that meshes well with the band’s sound. You need to not just be energetic yourself, but be able to radiate that energy and translate it into the crowd before you.

A good hardcore frontperson sings the songs correctly and performs in a way that’s entertaining to watch – but a great hardcore frontperson knows that they’re not the reason people paid to get in the door. The kids came for an experience that takes an entire room’s worth of effort to make happen, and it’s up to the frontperson to rally the crowd, keep the pit moving, be an entertaining spectacle, and also know when to step back and hand the mic off to the people up front.

Since this is such a tough balance to strike, we decided to celebrate the frontpeople in contemporary hardcore who are nailing it. Our qualifying rules were that these vocalists had to be from an active band who's unabashedly hardcore whose debut full-length was released within the last 10 years.

From noise-punk weirdos to beatdown titans, these are the 10 best frontpeople in hardcore right now.

Bryan Garris has one of those screams that sounds like it hurts. Since his band's 2014 debut Pop Culture, the Knocked Loose frontman has sounded like he’s shredding his vocal cords with every throaty yawp. That’s obviously not the case, given his delivery has only gotten more menacing and intense with every album. But the fact that some of his higher pitch screams induce wincing actually bolsters the intensity of his pained lyrics, and provides the perfect complement to his band’s down-and-dirty blend of metalcore and hardcore. His voice is unmistakable, and watching him do it live while sounding exactly like the recording is breathtaking.

Californian up-and-comers Initiate are great for their rubbery grooves and metallic riffs that they play through a melodic hardcore filter. But their crown jewel is vocalist Crystal Pak, who leaves it all in the booth – and on the stage – with every single song. Few frontpeople in the current game are as loud and loose as she is, injecting quick yet memorable ad-libs into her fiery verses that add a ton of personality. For instance, on the song One In The Same from their new EP Lavender, Crystal extends the word 'show' for a full measure while letting her voice naturally quaver, and then lets out a ferocious howl leading into the searing solo. She really treats her voice like an instrument, and that can be hard to come by in a genre where form is secondary to force.

Judiciary play an absolutely beastly breed of metallic hardcore, the kind that’s stuffed with hulking mosh parts, bullet spray guitar leads, and two-step sections that only seem fit for concrete floors. To play that kind of music effectively, you need a formidable frontperson whose voice and presence can contend with such an iron-fisted sound, and Judiciary’s Jake Collinson owns that role. As you can see in the above video of him playing to a rowdy storage space, Jake both looks and sounds the part (we certainly wouldn’t want to mess with him), and his monstrous delivery is the perfect blend of hefty lows and screeching highs.

When he’s performing, Gulch’s Elliot Morrow is a squirrelly motherfucker. Shirtless and beady-eyed, dashing across the stage while crouching over, rolling into summersaults, and breaking into twirling spasms that often leave him convulsing on the floor. He constantly looks like he’s one burst of adrenaline away from leaping off the stage and tangling with the biggest guy in the pit, but he somehow always manages to channel that energy into his animalistic vocal delivery. He’s one of the most entertaining frontpeople in hardcore, and you can also hear his spasmodic presence on the recordings of Gulch’s thrashing grindcore.

It wouldn’t be fair to mention one Code Orange vocalist and not the other, especially because together, Reba Meyers and Jami Morgan have created some of the most vocally impaling hardcore of the last decade. Outside of her brooding alt-metal clean vocals, Reba’s demonic scream rattles in the purgatory between a shriek and a bellow, with all the body of the latter but with hair-raising impact of the former. Jami’s chest-beating huff is more of a traditional hardcore delivery, which makes for a striking and essential contrast that emphasizes how their sound teeters between metal and hardcore. And live, both of them are behind their instruments but they still bring a level of domination to the mic that’s nearly unmatched.

There is some irony to Bib being on this list, given the vocals in their delirious cocktail of beachy psych music and noisy hardcore are A) mostly indecipherable and coated in reverb, and B) many of the words are instead ad-libbed 'oofs' and 'blaaaaghs'. Bib’s music is melodic and fun and dancey as hell (they named their 2017 EP Moshpit), but Nathan Ma’s vocals are actually somewhat secondary to the compositions themselves. Instead of standing front-and-center in the arrangements, he drenches his voice with effects and acts as a sort of hype-man or cacophonous ringleader, sending his utterances spiraling into the ether while the rhythm section keeps things grounded. Live, he rocks an outfit that looks like Slater from Dazed & Confused, reminding the world that hardcore’s got at least one cosmic weirdo in its ranks.

Philly's Jesus Piece are one of the heaviest bands in contemporary hardcore, bringing double-bass blasts that go off beautifully at anything from a deathcore bill to the lively pits of the This Is Hardcore universe. And they couldn’t do any of it without charismatic frontman Aaron Heard. Although he moonlights as the bassist in the shoegaze outfit Nothing, Aaron thrives in the center of the stage, unleashing his gruesome growl while towering above a crowd of swinging pit-goers. His range isn’t vast, but it doesn’t have to be – Jesus Piece’s music is titanic and Heard’s intimidating onstage demeanor suits it well, especially when he cracks a toothy grin at the sight of a particularly savage crowd-kill. This guy looks and sounds like he was born to be up there.

Walter Delgado of Rotting Out resembles a hardcore frontman from a cartoon – like someone Popeye would fight, or like a real-life version of the Tasmanian Devil. When he’s at a venue that permits stage-diving (which should be a requirement for Rotting Out shows), kids know to use him as a prop, either leaping off of him or straight-up throwing themselves on his shoulders and riding him like a bucking bronco. Walter remains unfazed by this sort of mischief, which is part of what makes him such a great frontperson, though his foaming-at-the-mouth bark certainly helps. Not only that, but Walter's also been doing it for a while, and he’s still one of the best and realest in the business.

Krimewatch’s Rhylli Ogiura comes from a hip-hop background, and she filters the swagger and attitude of that genre into her engrossing hardcore delivery. Singing in both English and Japanese, Rhylli’s classic NYHC vocals are punchy, youthful, catchy, angry and downright exciting to listen to. Onstage with Krimewatch, she’s got a commanding presence with tons of flair, bouncing up and down while headbanging but always keeping her delivery air-tight. This makes her a natural performer and an organic fit for the type of hardcore her band plays; a timeless blend of youth crew punk and thumping pit fodder.

There's something distinctly Californian to Drain's refreshingly bouncy form of metallic hardcore (makes sense, since they’re from Santa Cruz). Although they share members with Gulch and Hands of God, their sound isn’t quite that decimating and their thrashy gallops and walloping thuds are cut with a Turnstile springiness. Most of their charm comes from their vocalist Sam Ciaramitaro, who happens to sound a bit like Walter Delgado crossed with Riley Gale of Power Trip. Drain gained a boost of recognition over the summer for their excellent set at Sound and Fury, which saw Sam vaulting across the stage in light pink shorts, showing off both his goofy, non-threatening look and his Golden Retriever energy – all of which is to say he’s fun as fuck to watch perform. There can only be so many tough guys in Drain’s corner of the hardcore world, and Sam serves as a high-spirited alternative to the standard scowler.