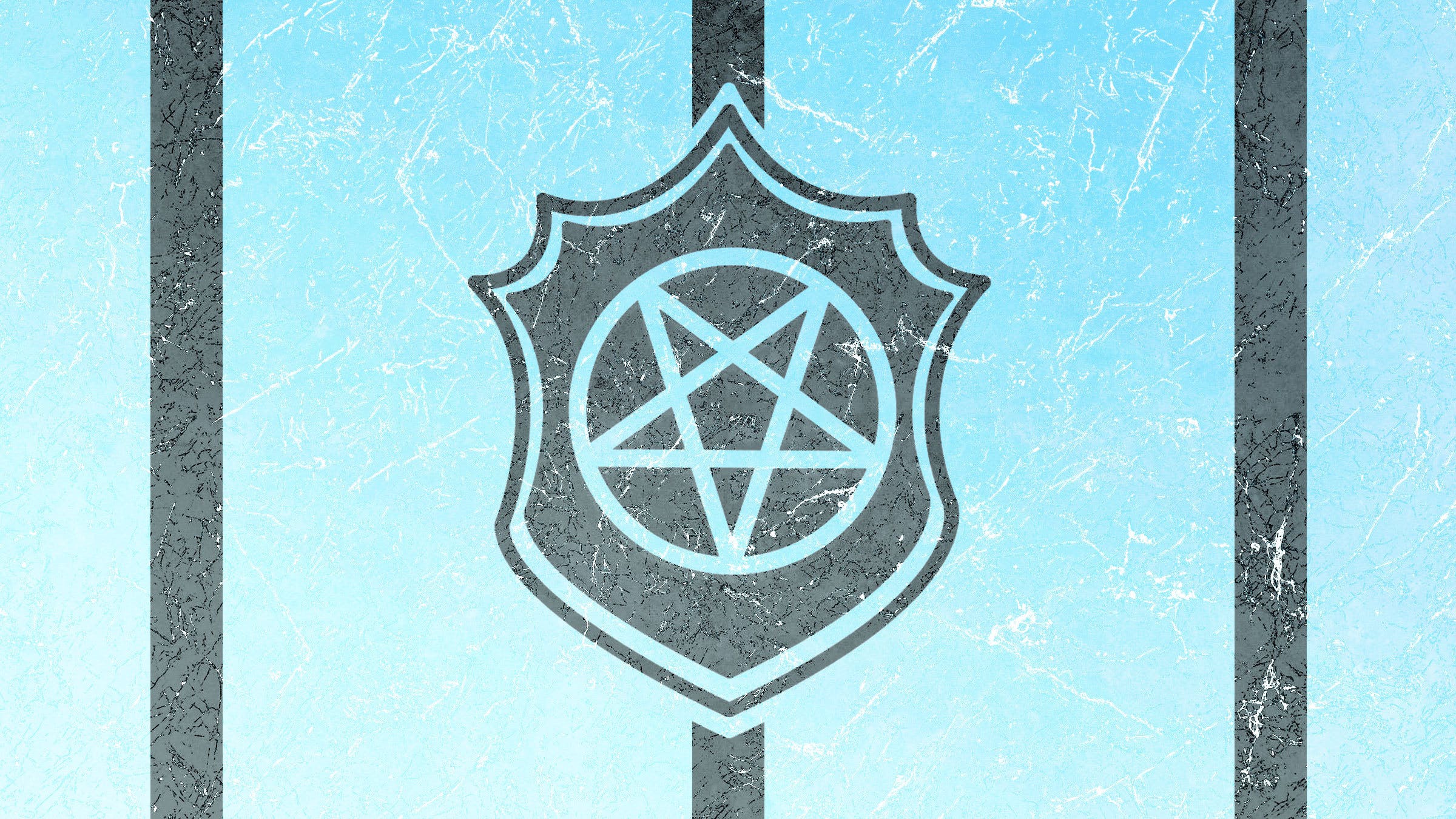 Ice hockey is by and far the most “metal” of the four major sports in North America. Between the sharp skates, blazing tempo, hard hits and of course, the fighting straight out of a Slayer pit, professional hockey provides a similar level of intensity and ferocity for it’s dedicated fanbase that metal and hard rock does for theirs, which is why it remains one of the more favored sports in the underground metal/hardcore scene. Between In Flames-inspired goalie masks and countless bands rocking their teams' hockey jerseys on stage, the crossover between these two realms is nearly endless.

One of the more enjoyable traditions of the NHL is the hallowed “goal song”, a predetermined anthem that the home team plays any time they score. Each team has their own anthem (except for the Islanders and Minnesota Wild, who seemingly both share a passion for the same Joe Satriani tune…), that defines their unique character and the region with which they call home. But not all goal songs are equal, and plenty of teams go with big ol' jock jams over hard rock or metal.

If you're looking for what team to root for based on music alone, here are the ten heaviest goal songs in the NHL.

The NHL’s newest and perhaps spunkiest franchise picked the perfect song to represent the party atmosphere of their home games and the brashness they displayed last year when they became the first expansion team to earn a Stanley Cup playoff berth since 1968. The Knights pay homage to hometown heroes Panic! At The Disco by blasting one of their finer synth-rock anthems any time they light up the lamp.

A few weeks ago I was watching the Flyers get destroyed by the Maple Leafs in Toronto and was shocked that this Hall & Oates hit from the early ‘80s was played in the arena’s loudspeaker after every Leaf’s goal. After all, as legendary as the Philadelphia blue-eyed soul duo is, I don’t exactly view their music as your standard “pump up the jams” tune. But after watching a few more Leaf’s home games, I’ve decided that I really love it. Every time star center John Tavares puts one in the back of the net, I’m treated to a rendition of a song that I would otherwise most strongly associate with a hilarious montage from the film Step Brothers. What makes this one stand out from the others is that it purely is a celebration of the home team’s accomplishment rather than a diss towards the visiting team. Fun: what sports should be about. Bravo, Toronto, bravo.

Though not winning any points for originality, it’s pretty hard to argue that the chorus of Blur's bombastic mid-'90s grunge banger doesn’t make for an absolutely kickass way to celebrate a goal. Who needs recently traded-away superstar Erik Karlsson when you have Damon Albarn and the boys to headbang to every night? And with second-year defensive sensation Thomas Chabot having an otherworldly year, hockey fans in Canada’s capital city will get plenty of opportunities to do just that.

7. NASHVILLE PREDATORS - THE BLACK KEYS, GOLD ON THE CEILING

Gotta love a goal song that’s got a little something for everyone. First, you have the excerpt from the Tim McGraw classic I Like It/I Love It to pay homage to the city’s storied history as the epicenter of popular country music. Then, after a few verses it devolves into the chorus of the Black Key’s Gold On The Ceiling, except with the added chants of “HEY! YOU SUCK!” and “WE’RE GONNA BEAT THE HELL OUT OF YOU!” added rhythmically to the mix. So much for southern manners, eh? Well, after winning the franchise’s first Presidents’ Trophy last year, they're allowed to talk a little trash.

6. COLUMBUS BLUE JACKETS - AC/DC, FOR THOSE ABOUT TO ROCK

Ohio’s only NHL team was named in commemoration of the state’s contributions to the Union side during the American Civil War. This being the case, the band has unoffically adopted 19th century cannons as a sort of secondary mascot, which seems perfectly into their goal song. There is no more memorable example of cannon fire in the entire canon (pun intended) of rock n’ roll than AC/DC’s For Those About To Rock”. The song’s bombast perfectly suits a team coached by John Tortorella, a man known for his sometimes explosive post-game interviews.

Uh-oh, this is either a case of “great minds think alike” or someone just felt like copying their buddy's homework. Granted that the group chant from this classic by Silver Surfer Joe Satriani himself is definitely one hell of a way to celebrate your home team scoring (though you can’t help but wonder, why doesn't one of these two teams just pick a song unique to them?) Either way, I think I have to give the edge here to the Minnesota Wild, simply because their actual goal horn sounds more like an 18-wheeler coming down the highway whereas the Islander’s horn sounds like an orca whale trying to digest an accordion. Maybe next year when they fully move back to Long Island they can find a song of their own?

Ok, full-disclosure: I am a Rangers fan, but don’t let my supposed bias stop you from enjoying this absolute banger of a goal song. Written specifically for the Rangers by Madison Square Garden keyboardist Ray Castoldi, Slapshot is both surprisingly hard-hitting and catchy. A lot of the NHL’s goal songs include “HEY!” chants but for whatever reason, they punch the hardest here. Now, if only the blueshirts can get their young core together around their famed goalkeeper Henrik Lundqvist, I think we’ll be hearing a lot more of this one in the near future.

Definitely the most “sinister” sounding of all NHL goal songs, Motown’s original six team celebrates every goal with an instrumental excerpt from hometown hero Jack White’s Battle Cry. It's refreshing that the Wings decided to forgo the obvious choice of the White Stripes' Seven Nation Army, a song that has been done to death in sports arenas around the world, and pick one of the lesser-known yet equally badass tunes from the Jack White discography. The song itself has a certain ominous edge that, along with the rhythmic clapping, creates a truly battle-like atmosphere perfectly suited for one of the NHL’s most storied franchises as they find themselves currently rebuilding for the future.

Even though one-man party monster Andrew W.K. is originally from Ann Arbor, Michigan, something about this song choice just feels very right for Pittsburgh. Much like Mr. W.K. himself, the Penguins have partied very hard in recent years, being the first NHL team to win back-to-back Stanley Cups since 1998, and for every home goal along the way, Party Hard has blared out of the speakers of the PPG Paints Arena, sending every faithful yinzer in attendance into a frenzy and giving fans of other teams some pretty harrowing nightmare fuel.

Sorry to all the other teams on this list, but you gotta take a backseat to Dimebag Darrel and company. Turns out the Dallas Stars’ goal song was not only specifically written for the team, but it was in fact written by the mighty Pantera. This goal song pretty much beats all the others in bombast and intensity and is probably the only one that could effectively conjure up a mosh pit in the proper setting. Supposedly the members of Pantera actually partied with the team after their lone Stanley Cup win in 1999 which might have inspired them to record the song for them. Either way, just know that when the team is at home and star center Jamie Benn and company light up the lamp, look out.