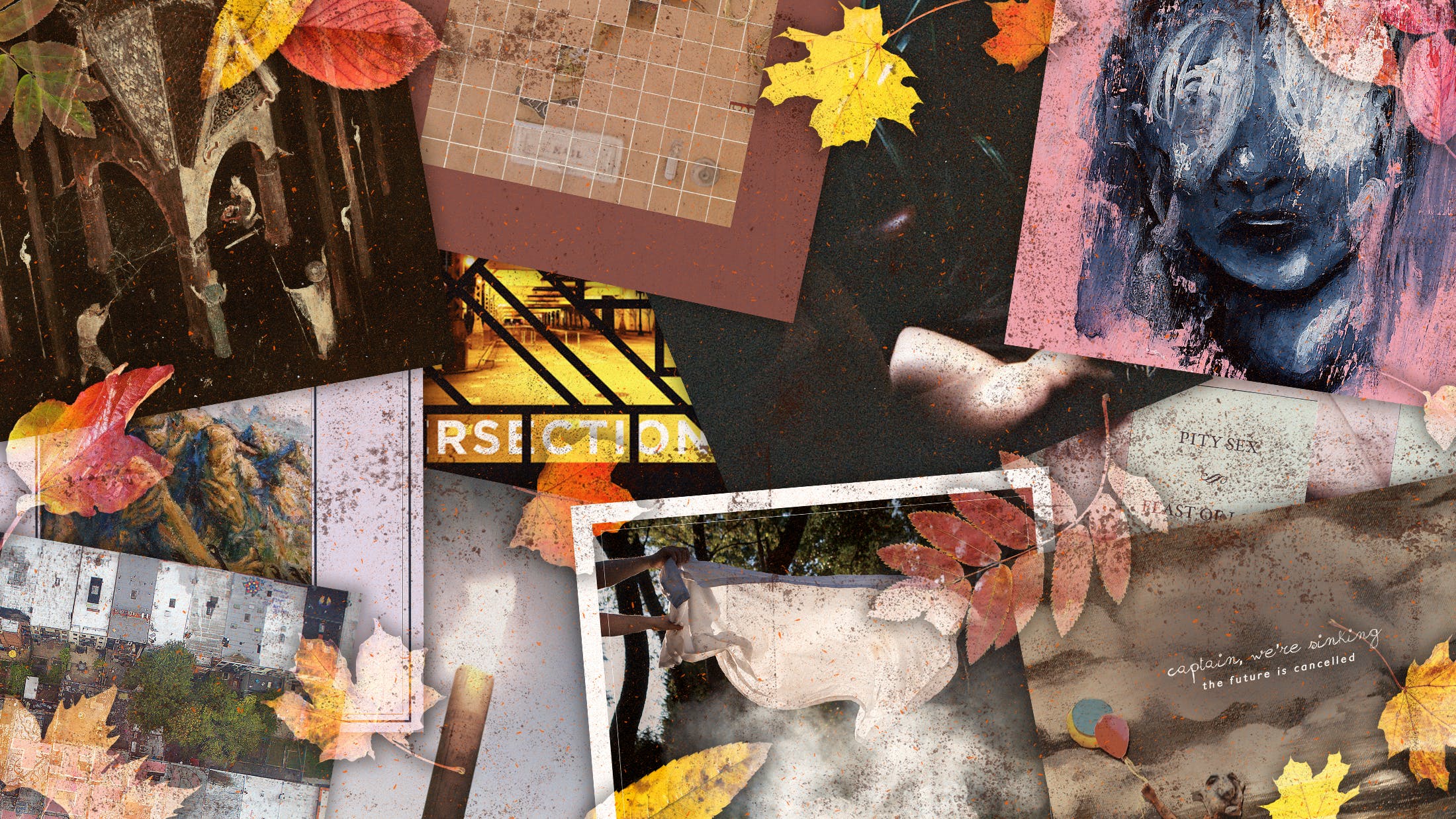 As the days begin to shorten and the leaves fall from the trees, we’re all going to need some appropriately gloomy music to get us through the next couple of months. So, we’ve put together a fitting collection of LPs; some forlorn, some comforting, others simply a great soundtrack to a late-evening trudge in the darkness, that will serve you well through the season. Don’t expect a whole lot of posi, though.

Creeper – Eternity, In Your Arms

Eternity, In Your Arms came out a few years ago, so by now you’ve probably played it to death, but it’s definitely worth a refresher listen. Besides, Halloween’s coming up. Time to get spooky.

Icy black metal blasts are usually best saved for the turn of the year, but this sprawling epic from Washington’s Wolves In The Throne Room is too good to wait for. Thunderous in all it does, this is perfect listening under grey skies.

There aren’t many pop-punk albums that fit the bill here, but The Dangerous Summer’s Golden Record is a brilliant exception. Deeply introspective and still massively relatable to so many, vocalist AJ Perdermo wears his heart on his sleeve in the best way on this album. Besides, when was the last time you listened to Catholic Girls? Such a banger.

Pianos Become The Teeth – Keep You

There are a few records in this list that are criminally underrated and their inclusion is as much an excuse to bring them up as it is anything else, but this one is a step further than that. A post-hardcore band wrote one of the most intimately affecting albums of recent times, flipping the genre on its head and opening the door for their peers to try new things.

As well as having one of the few pun-based band names that never gets old, Elvis Depressedly are masters of melancholy. The entire record exists somewhere between a hollow comedown and a vivid dream and invites you to waste the day away with it. A really brilliant example of mellow songwriting that never threatens to bore.

Quite a few of the albums on this list could be described as being a bit bleak – in fact, maybe that’s the common thread between them all – but this is the most gut-wrenching of all. Much of the album lives in the shadow of frontman Jeremy Bolm’s grief after losing his mother, but the way he expresses all that and more is nothing short of sublime.

A proggy, doomy offering sits slightly to the left of everything else here, but if you’re looking to be taken on a journey when the weather’s too shitty to actually leave your house, this is the one. Staggering in its scale and purposeful in its progression, Heartless will easily soak up an evening or two as you lose yourself in it.

Emo and punk have never mixed better than this. The Future Is Cancelled is a bleak, troubled account of 20-year-old frustration backed by inventive guitar work, moments of total chaos, and one of the best production jobs an emo album has ever had. If there’s one thing on this list that you check out, let it be this.

NOTHING – Tired Of Tomorrow

A swirling, dizzying listen, Tired Of Tomorrow is the sound of someone giving up in the most aspirational way possible. This is warts‘n’all self-exploration, but there’s something almost reassuring about it at the same time. NOTHING absolutely won’t lift your spirits, but they will help you to lose yourself for a while.

If this album came out in 1990, we’d be talking about it with the same reverence we would Sonic Youth and Pixies. Mitski’s lyricism is grounding and absurd, frank and unknowable all at once – you have to give this a go. My Body Is Made Of Crushed Little Stars is a feeling sorry for yourself anthem.

Architects – All Our Gods Have Abandoned Us

In terms of powering through, this is a masterclass. We all know the tragic story that unfolded in the wake of this record, but the album itself will go down as one of the greatest releases in British heavy music history.

Citizen – As You Please

After what many saw as a stylistic misstep on their last album, Everybody Is Going To Heaven, Citizen reined themselves in a bit and produced something much more comfortable in its own skin with As You Please. It’s still got loads of quirks and character, but the songs feel so much more together.

Being the band that seem to set the pace in their corner of the world, Title Fight slowed it all the way down on Hyperview. Filing down their hardcore edge with meandering shoegaze didn’t seem to lose any of the energy, however, and it proved one of the more successful experiments of a time when every band in their circle seemed to be having an identity crisis.

Balance And Composure – Light We Made

This one seemed to go under the radar a little when it was released, and that really shouldn’t have been the case. For a while, Balance And Composure were likened to 'baby' versions of just about every emo band under the sun, but with Light We Made they stepped far out of that shadow and created something simultaneously sinister and inviting. This is a tough one to sell, given that its strength lies mostly in the indescribable ‘vibe’ it creates on a full listen, but let curiosity take charge here and check it out.

Andy Hull’s songwriting has always suited the colder months and Manchester Orchestra's fifth album is exceptional. Grand and cinematic, Black Mile… will wrap you up in its narrative and astound you with its depth.

Into It. Over It. – Intersections

This is a collection of some of the best songs that have ever been written about renewal and a perfect reminder of just how good earnestness can sound. You can almost hear the leaves changing colour as IIOI’s wandering guitars bounce around in your headphones.

Not all of these albums are here to bum you out. Pity Sex instead offer an understanding comfort in their weariness, making for an album that’s a perfect soundtrack to some good old fashioned responsibility shirking. Shame the band broke up, really. This album showed so much promise.

Don’t let the title deceive you, this album from Philly emos Caracara is anything but summery. Taking as many unpredictable turns as the autumn weather, Summer Megalith is a perfect example of where emo goes after a ​‘revival’. Atmospheric, experimental, and absolutely brilliant.