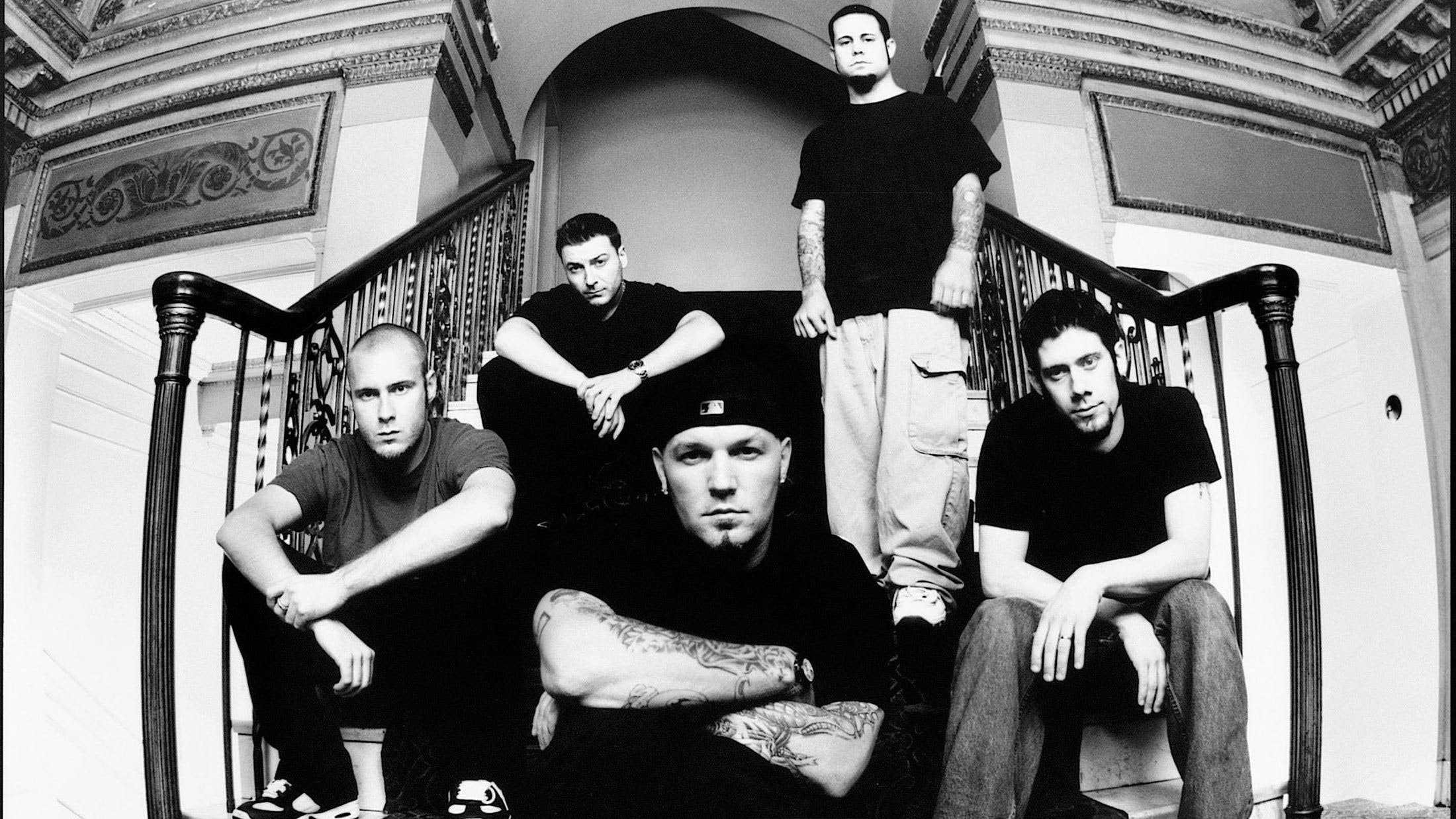 For over a decade, Limp Bizkit have become the ultimate greatest hits band. Whether it's a headline show or an hour in the afternoon at a festival, the nu-metal hooligans have perfected their setlist since their return in 2009 to a finely-tuned monster. Banger after banger after banger, with all the dance moves and over-the-top swearing that you can handle.

As we all know, his red cap gets a rap from the critics, but here at Kerrang! we're rather fond of Fred Durst and his lairy cohorts. So much so that we've put together a list of what we believe to be the 20 best Limp Bizkit songs of all time.

Check out, check-ch-check out our melody…

Back before the Bizkit became something of a divisive band for a lot of people turned off by their increasingly amped-up cartoonish elements, they were basically a bunch of snot-nosed punks making a righteous noise with a huge dose of hip-hop attitude running through their veins. This juiced-up blast of aggression is one of their most raw and unfiltered, and remains among the band’s purest expressions of disaffection with the world, even all this time later.

Mmmmmm, groovy. Quite a cheeky little bass thing going on there from Sam Rivers. Nice. This more mellow number from Significant Other is the perfect, smooth tonic to more aggro cuts like Nookie and Break Stuff, showing off what the band could do with a bit of proper singing and a big chorus. Wes Borland sounds like he’s having fun playing with his delay pedal as well.

It starts with a swirl of psychedelic sound before morphing into a violent diatribe against someone who’s presumably been spreading rumours about Fred. A high-energy warning about and to people who gossip, he doesn’t hold back, either. ‘You’ll get knocked the fuck out,’ he threatens ‘’cause your mouth’s writing checks that your ass can’t cash.’

Eight years after Results May Vary – and a few reunion shows with Wes Borland back on guitar – the band were back together, and subsequently Wes was writing music with Fred again. Gold Cobra gave Bizkit that much needed renaissance and kept their their ability to fuse rap and metal as seamless as the coming together of peanut butter and chocolate. Fred was back to spitting bars with Wes unleashing his recognisable riffs, reminding us why he was so sorely missed.

A typically loose-sounding track from Limp Bizkit’s first album, Three Dollar Bill, Y’all$, Stuck begins as a bass-heavy, almost gentle hip-hop track, before the band explode in a torrent of riffs and gnarly vocals. Yet half the time, Fred Durst’s voice sounds really vulnerable and raw, as if he’s about to cry – before deciding to shout his throat out instead…

Is this the greatest ode to swearing ever? It certainly rivals Murderdolls' I Love To Say Fuck as the most joyous appreciation of The F Word ever committed to tape. The first track proper on Chocolate Starfish is the perfect set-up for the absolute insanity and obnoxious behaviour coming your way, as Fred raps about 'fucked up moms and fucked up dads' and that 'fuck's just a word and it's all fucked up'. The crunching Nine Inch Nails-inspired chorus is just the icing on this expletive-ridden cake, that never fails to raise a smile at the sheer ridiculousness of it all. Fuck yes.

And this is where things started to maybe stray into the surreal. In 1999 Limp Bizkit were hot shit in the rock world and Wu-Tang Clan were hot shit in the hip-hop world. Combine forces courtesy of a sick guest spot from Method Man giving Fred a run for his obnoxious crown, and you have one of the most unique and superlative cuts from the band’s gargantuan second album, Significant Other.

It opens with the proclamation that Limp Bizkit are ‘Keeping it real, worldwide’ and across a series of frankly silly shoutouts, the Floridian heavies proceed to essentially list the ways in which they’ve kept it real in various North American cities. Even better, watching kids lose their shit in a Berkshire field as they opened their set with it at Reading Festival in 2000 felt extra preposterous. But when that explosive release in the chorus-but-not-really hits, there are few better Bizkit songs for lighting the touch paper in the pit.

Following the departure of longterm guitarist and body-paint enthusiast Wes Borland, Fred turned to his mate, Mike Smith from early ’00s nu-metal outfit Snot, to fill the gap their eye-popping axeman left behind. Eat You Alive, in true Limp Bizkit fashion, was accompanied by a big-budget music video, featuring Bill Paxton of Weird Science fame, and Thora Birch of The Hole fame. The clip shows Thora having the words "Hey you! Mrs I don't know what the fuck your name is!" shouted at her by the angry Bizkit, while Bill hunts them down with a pack of dogs. Obviously. The song attracted much criticism, but the combination of Fred screeching 'I'd eat you alive' and the crunching of Mike's riff makes this a wildly under-appreciated Bizkit gem.

"This is dedicated to you Ben Stiller! You are my favourite motherfucker…" Anyone complaining that Fred had 'Gone Hollywood' received their two-fingered response on this absolute banger. A gleefully OTT ode to the fever-dream excesses of millennial superstardom, Livin' It Up found the frontman letting his public persona off the chain as Wes (just about) kept things tied down with some of his most straightforwardly explosive riffs.

The very first time we listened to Ready To Go in the Kerrang! office, we decided to play it again, then again, then again, until we had listened to it literally 35 times (genuinely not an exaggeration). There was just something immediately loveable about it. Maybe that addictively repetitive beat, or the fact that it's so comfortably brazen, or that Lil Wayne guest feature… It's just like no other Bizkit track to date.

Move in! Move out! Hands up! Hands down! Back up! Those instructional lyrics make this iconic second single from 2000’s third album, Chocolate Starfish And The Hot Dog Flavored Wate, as much an exercise regime as a song. It all seems like a lot of effort to just keep on rollin’, but presumably Fred knows best. After all, it’s still their highest-charting single ever on Billboard…

The Bizkit song that first caught the UK’s ear, having appeared on a Kerrang! covermount CD ahead of the release of Three Dollar Bill, Y’all$, Counterfeit is a breeze-block of an introduction. With a one-two main riff, some classic rap-then-build-up-then-scream-the-last-bit vocals from ol’ Freddy D, and a swagger that ought to be carried around in a wheelbarrow, it’s like the early Limp Bizkit exploded all over you, giving you a good look at every side of them.

Eerily fading in before diving into a pounding riff, Boiler is Limp Bizkit at their most experimental. No big dumb choruses flanked by record scratching, instead we find Fred at his most contemplative, repeatedly asking ‘Why?!’ like Socrates in a red cap. The meditative bassline and gradual build to the final chorus is pure catharsis, sending Bizkit fans across the world into raptures. But what is that video about? A headless Wes, a weird sex factory and a naked Fred Durst cartoon… They sure don’t make ’em like that anymore.

Amongst the avalanche of high-bravura hits that was Chocolate Starfish, it was almost easy to overlook the brilliance of My Way. When the song was picked up as main theme for Wrestlemania X-7 (arguably the best ever) however, hearing Freddy D’s defiant croon of 'My way or the high way' as The Rock and Stone Cold Steve Austin knocked seven shades out of each other made its high-testosterone appeal irresistibly clear.

It's no secret that Fred Durst likes playing cover tracks more than Limp Bizkit songs (fun fact: when they soundcheck, it's pretty much exclusively covers), but his take on the George Michael classic is far better than it has any right to be. The vocal delivery might not be as, er, smooth… as George's, but it's a whole lot more impassioned than the original, and extremely Bizkit in its Bizkit-ness. Just how a good cover song should be!

4. Take A Look Around

Most acts, when asked to create a movie theme, often phone it in and deliver the bare minimum (lest we forget Madonna’s Die Another Day). But for Limp Bizkit to utilise the iconic Mission Impossible theme and have it fit flawlessly within the song – as well as making it kick huge amounts of arse – is not as easy task. As goofy a reputation that Fred Durst has when it comes to his lyrics, they fit perfectly here, creating an energetic, tough and fiery performance. Not only is this song a great action theme, but a raging soundtrack to anything in general.

Although you can't help but imagine Fred envisioned this as a comparatively straight-faced anthem to his 'Generation-X, Generation Strange…', the baffling cod-profundity of lines like 'Hey kid, take my advice: you don't wanna' step into a big pile of shit…' left it somewhat difficult to take seriously. Still, packed with riffs that sounded like they were written on a trampoline, featuring shoutouts to drummer John Otto and DJ Lethal, and delivered with all the bone-headed good humour of a Jackass skit, this has never failed to incite outright chaos in the live arena.

Surely there’s never been a song as self-explanatory as Limp Bizkit’s trademark hellraisers’ hymn. 'Everything is fucked, everybody sucks! You don't really know why, but you want to justify rippin' someone's head off!' Although the abhorrent behaviour the track helped accelerate at Woodstock 1999 lives on in memory, this was an ode to far more mundane mardiness: that day-to-day infuriation we’ve all endured. Overflowing with drywall-punching vitriol, yet – crucially – undercut with a calm-after-the-storm sense of its own ridiculousness, Break Stuff actually managed to transcend the Bizkit bubble to become a knowing battle-cry for those on short fuses everywhere.