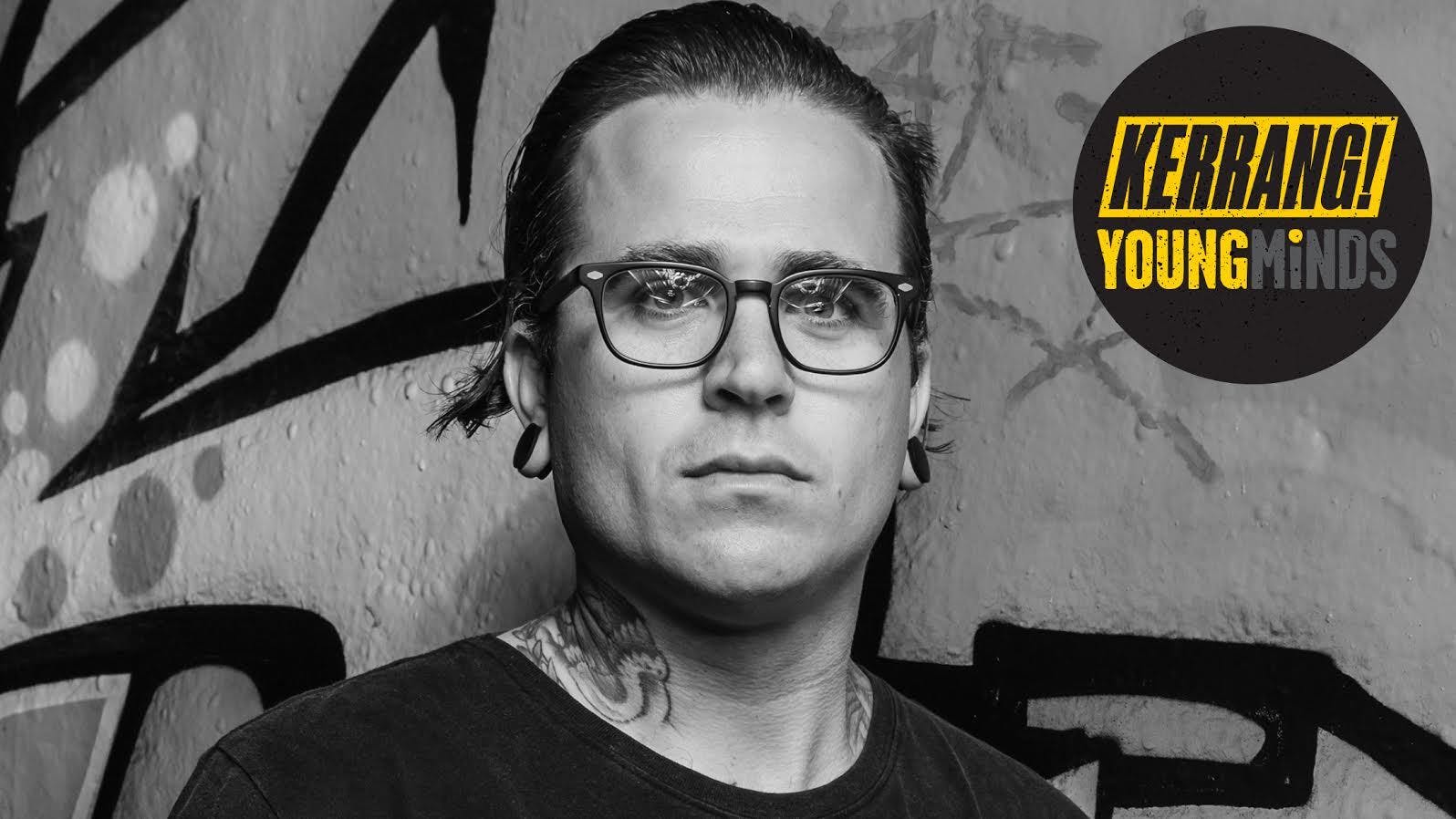 We’re chatting to some of our favourite people about their mental health experiences as part of the YoungMinds takeover of the Kerrang! site this month. Today, Joel Birch of The Amity Affliction opens up about suffering with mental illness as a teenager, and reflects on the help he’s received from friends and family.

There are few bands in modern metal who tackle the subject of depression as openly as The Amity Affliction. Frontman Joel Birch’s lyrics make for a devastating listen; discussing depression, anxiety and chemical dependency with unflinching honesty, the Australian four-piece certainly can’t be accused of holding anything back.

With his band set to headline the K! tour in less than two months’ time, we spoke to Joel as part of our collaboration with Young Minds, and the Queensland native talked us through what it was like to grow up with depression, the battles he’s faced since, and if the band’s lyrics will continue to confront mental health going forward.

When did you first experience symptoms of depression?
As a teenager – but undiagnosed. Instead of being sent to a doctor, I got sent to Christian counselling, and people tried to pray demons out of me! I don’t think anyone ever needs that [laughs]. I don’t believe in it at all – it’s ridiculous.

I really didn’t know anything about mental health until I ended up in hospital because of it. When I woke up, I was told the only way to be discharged was to see a psychiatrist. So, I spent an hour with this psychiatrist before I left, and she told me I had chronic depression. As I’ve gotten older, I’ve found out more about my family history, and it turns out mental illness is pretty common in my family. It would’ve been nice to know that when I was younger, but I guess parents try and shield their kids from things when they sometimes shouldn’t.

So mental health was never discussed in your family when you were growing up?
No. In the ‘90s, when I was a teenager, mental health wasn’t a prevalent topic in society. My mother being in a Pentecostal church, coupled with an environment where mental illness wasn’t discussed, meant that nothing was working for me with regards to my own mental health. As the years have gone on, mental illness has become more prominent in the public eye, and it’s allowing us to tackle the problem head-on, which is good.

What did you want people to do at the time?
I don’t know – hindsight isn’t beneficial for me. I can think back about what I expected from my peers, friends and family, but it begs the question of, ‘How were they meant to react to something that, like me, they weren’t aware of?’ There’s no ‘right’ way for people close to you to initially react to you struggling with mental illness. But the support I’ve been shown more recently has been nothing short of exemplary, and very understanding. I can’t fault the friends I have now. There are some people who I’m not friends with anymore who told me straight to my face that I didn’t have any problems and that I was being a fuckwit, and I’ve obviously moved away from those people. But the friends I’ve still got now – whilst they may have initially reacted negatively and been lacking in the empathy you’d expect – I don’t think they could’ve reacted in any other way than how they knew to at the time.

What are the good things your friends have done to help you?
Just being open and allowing me to discuss it with them: they allowed me to openly say, ‘I have a problem, and this is the situation: I might not be able to explain it fully, but often I’ll feel like I don’t want to be here or that I want to die. I’ve got no rational explanation for why I feel this way. This is what the doctors have been saying; and this is the medication I’m on and these are the potential side-effects.’

All they did was be available for me to talk to if I wanted to. A lot of people don’t want to talk about it, but the feeling of knowing you can talk about it is often enough.

You’ve touched there on the idea that people sometimes feel they can’t talk about their feelings. Were you worried about the stigma associated with mental illness before you spoke out?
I absolutely felt that, and I was stigmatised. I had one friend in particular who was brutal about it: he had no empathy, and then almost a decade later, his brother started to suffer with mental illness, and this guy finally got to experience what it was like. I don’t know how he dealt with it, but I spoke to his brother and had many conversations with him about mental health, and was there for him as much as I could be. But the way that then-friend reacted was the way that many people do, and that is to tell the person suffering that it’s all in their head, which is such a fucking ridiculous thing to say. Yes, it is in your head, but there’s nothing you can do about it – there’s no stop button. You can’t just switch it off and suddenly feel overjoyed. It doesn’t work like that.

Why do you think some people still stigmatise mental illness?
Because not everyone is wired the same – some people are wired sensitively, and some people aren’t. As well as that, some people cruise through life without ever encountering a mental health problem, or they don’t encounter it until later in life. Someone might not experience depression until their forties, and then they’ll realise that so and so from high school that they were really insensitive to when they were 15 was actually dealing with a major problem.

The only way to stem the problem of stigma – and this especially applies to young people and all the issues they face in school with bullying and teenage insensitivity – is through education. And I don’t mean your standard ‘slideshow’ education – it’s really important to teach kids to understand what it’s like to exist in the mind of someone with depression. It’s a different, irrational and cruel world to live in, especially if you’re not seeking help, taking medication or in recovery. If you’re a teenager going through this, and everyone is telling you you’re a pussy, you’re weak, you’re a stupid bitch, or whatever, then you’re likely to think that’s true, given you’ve got a fragile, sensitive mind. You’re much more open to negative suggestions when you’re depressed.

Touring can be fucked, and fans treat you like shit if you say otherwise. If you say, ‘Touring sucks,’ you cop abuse for taking your life for granted. If you say you’re not having a good time on tour, people are like, ‘What’s your problem?! You’ve got the best job in the world!’ There’s a flipside to everything: sometimes touring is shit, and sometimes I don’t want to be doing it. Sometimes I don’t want to be on-stage, but I have to get up there and perform like I want to be there. That can be a crazy mental struggle – knowing I have to go and do something, when all I want to do is curl up in bed and do nothing. But, at the same time, sometimes I get up on stage, and the feeling I get from the audience is the only thing I needed to turn the day around. I’d say the relationship between the music industry and mental health is 70% great, and 30% terrible.

The Amity Affliction’s lyrics have a well-documented association with your experiences of depression, but I understand you’ve tried to move towards a more narrative-driven style with the music you’re currently working on – is that still the case?
It’s not happening. I don’t know why, but roughly once a year I go through a period of extreme instability, and I’ll just do crazy shit. I already had limited time on my hands, but I recently enrolled in university to study political science, whilst also trying to organise doing wedding photography. I was trying all sorts of shit, and I ended up having a breakdown after my wife sat me down and said, ‘You need to stop for a second and think about what you’re doing.’ And the whole creation of this narrative-based concept album was part of that experience. So, moving forward, I’m just going to write what I write and not put any pressure on myself to write anything apart from what I feel like writing. I’m putting the concept idea on the backburner.

If you’re struggling with your own mental health, don’t suffer in silence. Talk to someone you can trust – it could be a friend, a family member, a teacher, a doctor, a counsellor or a helpline – or visit YoungMinds for more information about how to find support. If you’re passionate about improving young people’s mental health and wellbeing then take a look at all the ways you can get involved with YoungMinds’ good work here.