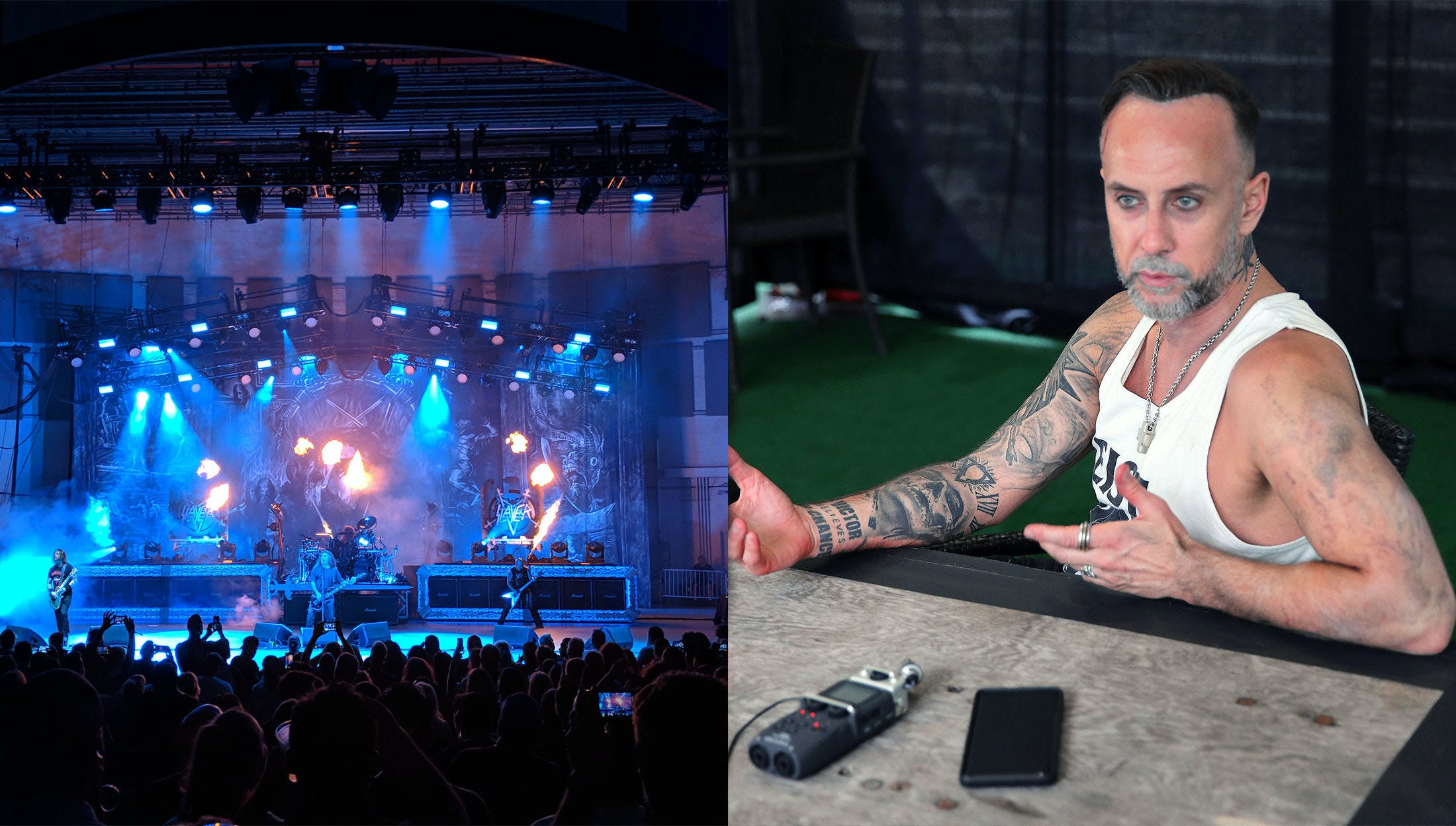 The first leg of Slayer’s North American tour is now in the history books. While we wait for the second leg of the tour to kick off on July 26 (followed by a slew of exciting shows in the UK and Europe starting in November), we thought we’d ask members of the four supporting acts on that first round of shows to recount the first time they ever saw Slayer perform.

I think the first time I saw Slayer was when they were in Poland with System Of A Down. It was the late ‘90s, and they were supporting Diabolus in Musica.

When we were kids, a friend of mine was always ahead of me when it came to metal. He really liked thrash, and my barrier wasn’t pushed that far yet. And I remember he’d play me Raining Blood, and I was like, “Oh, man, that’s too much. I can’t take it, it’s just too extreme. It’s not even music, it’s chaos!” I must’ve been 8 or 9?

But then I got into Destruction, Kreator, and obviously Slayer. And I became a disciple. My first Slayer experience was with Show No Mercy or Live Undead (when they pretty much played Show No Mercy). Evil Has No Boundaries was one of the songs that got me hooked on Slayer. Everyone goes for Reign in Blood -- but for me it’s always Show No Mercy. That’s how Slayer deflowered me; the album that they used to rape that naive little kid.

Show No Mercy was uncompromising, it was crazy, it was fast. I remember I read this article in which someone compared Slayer to jazz, and back then Show No Mercy seemed very technical to me. In fact, it’s not a very technical record -- it’s pretty punk-y. It’s a very punk-y, hardcore thrash metal record.

But I also was very much attracted by the aesthetics of Slayer which has been all about occult and Satanic topics. That was something that made them also stand out. It was evil, it was captivating, it was very tempting in many ways. And I was raised Catholic and was still Catholic when I became a Slayer fan. I remember I managed to buy a Live Undead poster -- you know, with like, the zombie in the cemetery, fuckin’ like, gravedigging. It was fucking scary as shit! And I would put it right next to my face above my bed. And then I would pray to baby Jesus and reject that [evil] ideology, but at the same time I was drawn to it somehow.

Following the Catholic tradition of my family and my country that is so Catholic -- it’s like a mandatory thing. You just do it automatically, because you’re already brainwashed. But then there’s something much stronger than automatic behaviors and inbred formulas, and that is intuition and some kind of activism. There must’ve been a massive rebellious potential within me...that was just the spark -- the flame, it started burning. Slayer was a part of my liberation.

Slayer influenced me musically, too. There’s a song called No Sympathy For Fools on Zos Kia Cultus that has this total Slayer vibe. The Slayer groove will come out occasionally in Behemoth’s music as well. Or sometimes, ‘How about using a Slayer harmony here?’ Obviously our music is different, but there’s a huge Slayer part in what we do. There’s Venom in there, too. Even if you don’t literally hear Venom, it’s there.

I was talking to Kerry [King, Slayer guitarist] two days ago -- we were having Jager shots backstage, and we started talking Venom. He said, ‘You know what? You are what Venom could have become if they learned how to play and would be able to elevate that.’ That’s a huge compliment! We’re both Venom worshippers so we have this common ground, you know?

[Touring with Slayer] is a dream come true. And hey, I’m 41, I’ve been running this band for, what, over 25 years? And I’ve been around; we’ve done shows with some big bands, but I’m a fan-boy. I’m a huge admirer of the scene, and Slayer is a huge part of the scene. So being part of this tour -- already historical, because it’s a farewell tour -- we’re already in the books forever.

But also, even today we’re doing our set and I see Kerry on the right side watching, and on the left side I see Paul [Bostaph, drummer]. The other two tours that we did [with Slayer] were more intimate. It was only three bands: Us, Lamb Of God, and Slayer. Pretty much everyday there’d be all four of them watching our set. Tom would come out and watch us! I don’t know them that well, but managers were like, ‘That’s weird -- Tom never goes out to see other bands.’ And I’m like, ‘That’s awesome.’

So they are like the pioneers, right? One of the very first bands to define extreme metal. They’re still here, and at the peak of their career now. This tour is outselling the famous Clash Of The Titans tour from the early ‘90s, which is fuckin’ incredible. This is the proof that Slayer is the #1 extreme metal band on the planet, and I’m not even trying to be nice -- I don’t need to lick anybody’s ass -- I’m just happy to be on the bill with this awesome band.