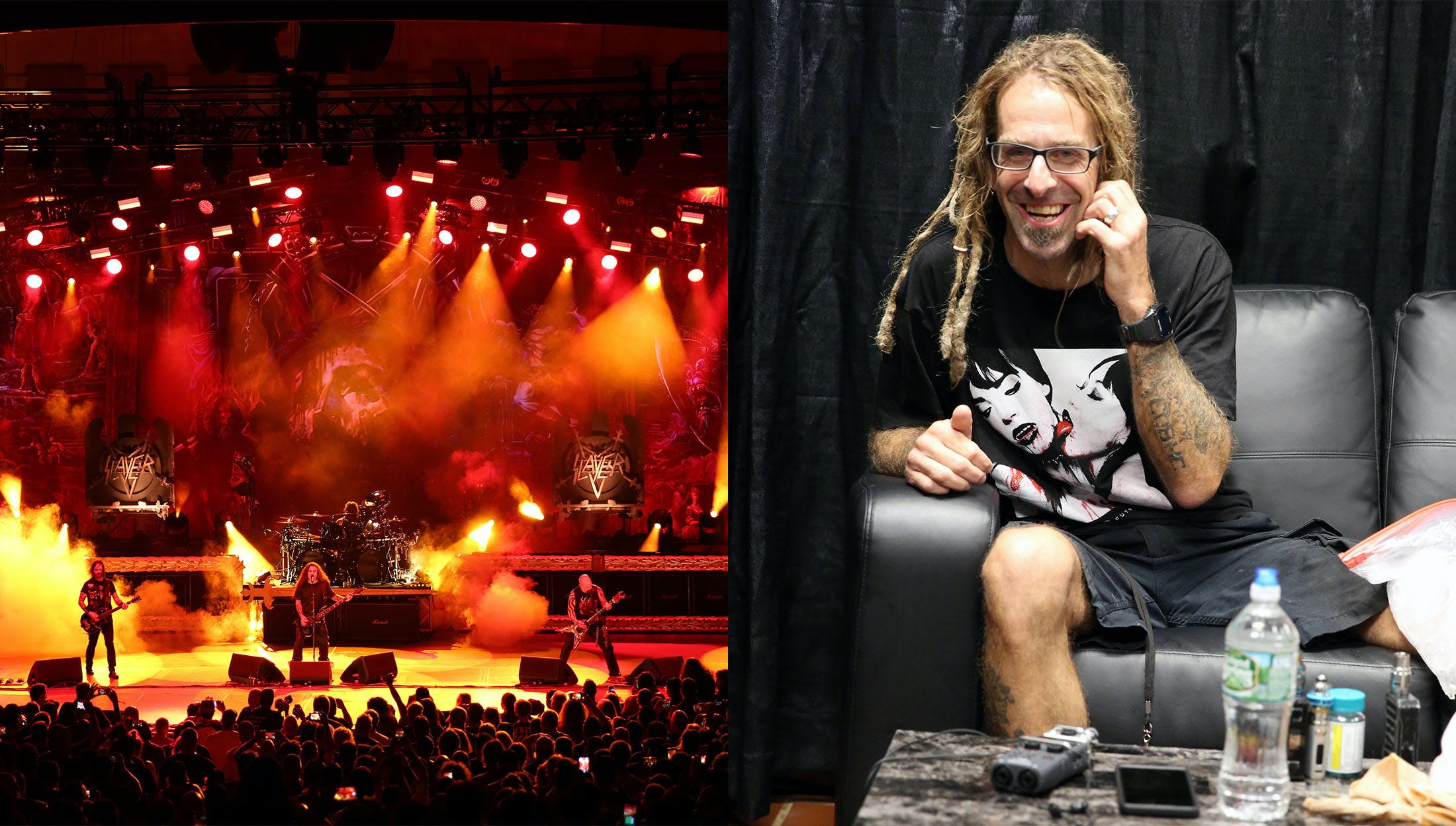 The first leg of Slayer’s North American tour is now in the history books, and our own Chris Krovatin was at the band’s final New Jersey show to compare his experience to the first time he saw them play the same venue 19 years ago. While we wait for the second leg of the tour to kick off on July 26, we thought we’d ask members of the four supporting acts on that first round of shows to recount the first time they ever saw Slayer perform.

In today’s instalment, we hear from Lamb of God vocalist Randy Blythe.

The first Slayer show I ever saw was in ‘89, ‘90, or ’91 – one of those three – at a venue in Richmond, Virginia, called the Mosque. The Mosque hosted several legendary artists over the years, including Iggy Pop. Now it’s called the Altria Theatre, or some bullshit.

I was really excited to see Slayer, because I didn’t start really listening to them until maybe the summer before my senior year in high school. I lived in this little town, and I was like, the punk rock kid: Bad Brains, Sex Pistols, Black Flag, all that stuff. My brothers and I were the only ones into punk rock. But there were a couple of metalheads -- real metalheads; we’re not talking like, glam rock metalheads, but like, thrashheads -- who would hang out with us ‘cause they were the burnout stoner-type. You know, they had the jean vest before everybody could buy them at Hot Topic, with the big Slayer back patch, and looked like they were around in ‘81 even though they weren’t born then.

This one kid was like, ‘You need to check out Slayer. They’re fast, and they’re aggressive like punk rock.’

Back then, there was a much bigger divide between the punk scene and the metal scene. There was some crossover-type stuff like CoC, D.R.I., The Accused, Septic Death, and SoD…. but [with Slayer] I was like, ‘Ugh, I don’t know -- They sing about Satan, which is kinda silly.’

Finally, I went to the record store and I was like, ‘What Slayer record should I get?’ This was before South Of Heaven had come out, so [the record store clerk] was like, ‘Reign in Blood.’ It was the first album I ever bought with a parental advisory sticker on it. I listened to it, and I was like, ‘OH MY GOD, DUDE. This is so aggressive!’ It’s fast, and there’s this raw energy to it.

Of course, getting to know these guys over the years, I know Hanneman was into a lot of the punk stuff, and that’s where the speed and all that shit came from. But Slayer was one of those groups that bridged the gap. Even back in the day when there was such a big divide between the musical scenes, punk rock kids would see Slayer, metalheads would see Slayer, hardcore kids would see Slayer. It’s fucking Slayer. Slayer is a noun, it’s a verb, it’s an adjective. They’re more than just a band!

But that first Slayer show I saw was probably the worst Slayer show I saw. Because the Mosque is a very nice venue for like, the Nutcracker Ballet at Christmas, so it was 100% seated. There wasn’t even a little pit area up front. And the security is walking through telling people to stay in their seats, y’know, not to be too raucous -- and of course a bunch of seats got broken that night, and a bunch of people got thrown out.

Testament opened up (who’s also out on this tour with us), and I was like, ‘This is crazy -- why does that dude have half a mic stand?’ And then Slayer came out, and I do remember their light show. I was really impressed because coming from like, just seeing punk rock bands and basement shows, nobody gives a fuck about lights, you know?

I’m pretty sure I didn’t see Slayer again until July of 2003, when they took us to London to play two sold out nights at the Astoria, a historic venue that no longer exists. This was a very impactful thing on me, as a musician, and on my band. People always ask, ‘What were some of these magic moments you’ve had on stage?’ The first was playing at CBGB for the first time; the second was Slayer taking us out of the country for the first time. (Canada doesn’t count.)

It was just us and Slayer. Slayer played the entirety of Reign In Blood both nights. And people knew the words to our songs, they were goin’ off! And I remember very distinctly seeing off-stage right, there’s Kerry King with a bottle of Jagermeister. He gave me a shot later, and I was like, on stage, going ‘I’m in England, with Slayer...I’m getting paid to do this...and people know our music.’ And that was a moment where I thought, ‘Okay, maybe this could turn into a career.’ I still had to come home and work a day job after that -- working in the restaurant business, or construction. But that moment on stage was very impactful for me.

Slayer’s music has also impacted our band. If there’s a modern metal band out there playing today that says they weren’t influenced by Slayer, they’re either really young and completely unaware of the history of this music…or they’re just fucking lying. Slayer has influenced everyone. Everyone. When we write music, you’ll see on the dry erase board, it’ll be like ‘Fast part / Breakdown / Slayer riff / blah blah blah.’ Almost all bands do that.

Lamb Of God supporting Slayer at the PNC Bank Arts Center in NJ.

I think that maybe on the last couple of shows we ever play with those dudes, it will sink in: that these guys are going. But I’m still gonna go to Kerry King’s house and fuckin’ hang out when I’m in California. They’re people. They’re cool fuckin’ guys! And it should be noted that they have been exceedingly cool to us over the years. Not only to us, a lot of other younger bands. And when they said, ‘Hey, you can come out and open up for us for two shows in England,’ when not that many people had heard of us, it was a huge deal for a young band. I think it’s good to see that they’ve done that for so long, so consistently.

And that’s the other thing: Slayer’s a very consistent band. It’s not like all of the sudden they made like, a rap record, or went into country or something. And it’s not that there’s anything wrong with stylistic changes in the pursuit of musical growth… but Slayer has managed to consistently be Slayer their whole career. There’s something to be said about that. And they’ve had a long career. They did their first fuckin’ tour in a Camaro, bro.