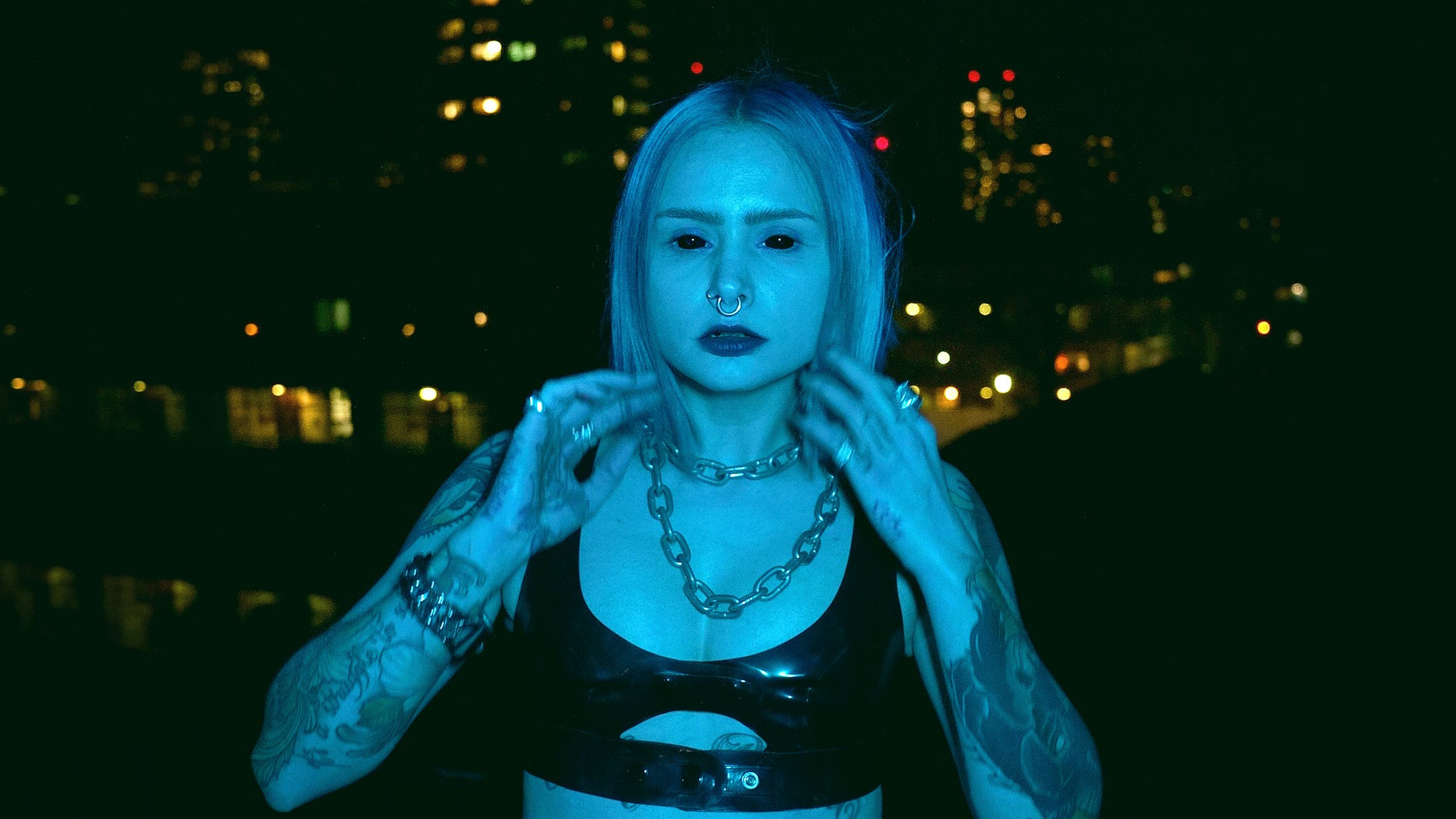 This feature is part of our Gotham After Dark series, exploring the interaction between urban settings and music, celebrating the release of The Batman.

On the fringes of urban society, it often feels that every larger-than-life character you stumble across can easily be placed into one of two categories: hero or villain. Mimi Barks, however, believes that she’s a little bit of both.

“The best way to describe myself is to describe my music,” she begins, with blue-washed hair tucked under a black baseball cap, and an industrial chain around her neck, as she plugs away in the studio at sunset on a stormy Friday evening. “I’ve christened my music ‘doom trap’. It speaks for the misfits: [an exploration of] the deepest darkness of the mind, from self-destruction to megalomania to spiritual awakening. We all wear a mask. We’ve all got an ego. We all have a light side and a dark side. It’s just about which one we choose to reveal…”

Indeed, the theme of penumbral duality – caught between gloom and glow – flows through everything that Mimi does. Her singular sound has one foot in the neon electro-rock of bands like The Prodigy and the other in the ghoulish goth-rap of artists like Ghostemane. Her aesthetic (which she playfully waves-off as “fetish fashion”) often revolves around the juxtaposition of colourful, cutting-edge attire worn against dingy, Gotham-esque grey backdrops like abandoned buildings or forgotten graveyards. She’s even the product of two cities, having begun her journey in Berlin before relocating to London three years ago. In many ways, the contrast between those great European metropolises has been most informative of Mimi’s work.

“In Berlin, it can be like you ‘enter the void’,” she grins, surreptitiously dropping the name of her 2019 debut LP as she unpacks the appeal of the German capital’s legendary nightclub scene. “Techno clubs in Berlin are open from Friday to Monday straight through. You get to meet so many amazing artists, but if you don’t go with a plan, you can get lost very easily.”

From mythical nightspot Berghain to sex-and-techno havens like KitKat, where punters could literally hit the dancefloor naked without security batting an eyelid, the themes of liberation without limitation and electronica taken to its extremes are still ingrained in everything Mimi does. “You are literally 100 per cent free,” she continues. “I’ve never experienced anything like that in another city.”

So why up-sticks for the far side of The North Sea?

“Germany just isn’t ready for this sound yet,” she shrugs. “The UK is more forward-thinking and progressive. Plus, I needed fresh inspiration for my music. I was hoping to see the raw underground scene that I had been fantasising about – literally the secret, illegal raves where people are just being themselves. [Events like that] attract the right people because this information isn’t being posted online; it’s only being shared by word of mouth.”

If there’s one aspect in which Brexit-Britain is still a world leader, it’s forcing aspiring artists out to the fringes of society. When Mimi moved to the city, she found herself with little choice but to base in a warehouse space with 20 other creatives. To this day, she still resides (and records) in the Manor House district – once a haven for squatters, now a bustling locale where countless old storage units have been converted to shared living. If the police aren’t trying to find a party in one of the adjacent buildings, it’s probably because it’s happening in the one where Mimi sleeps.

“Everything is three times more expensive in London,” she continues. “The only way to survive here as an artist is to live off the grid, which is beautiful when you’re making art. I get inspired by [it] every day. In my music, I take sadness and turn it into anger. That sadness – that drive – just doesn’t come from standing still or being in a happy place.”

True to that, Mimi stresses that she is not an artist who can write for the sake of it, and that every song is a direct reaction to some surge of emotion. She’s been prolific recently, though. Although not at liberty to spill all the details, she reveals that latest single RAD is the final song written for her upcoming second album. 158 seconds of rumbling synths and vicious rhymes (‘You're so tough on the surface / When I cut you open you’re nothing but worthless / Goth boys getting nervous’) accompanied by a video that sees the singer all in black – including blacked-out contact-lenses – it feels like it’s another step on her embrace of the darkness.

“It’s the least dark track that I’ve released so far!” she retorts. “It’s empowering, about the growth of self-worth. RAD is the result of everybody that’s fucked me over in the past. Defeat isn’t downfall, it’s just an obstacle. And the message is to not give any fucks. [We can] recreate our reality with our thoughts. You have the chance to believe in and love yourself even if no-one else does.”

The broader collection, Mimi expands, will form something like a concept album fixated on that growth from darkness into empowerment and on out to the euphoria of a “delusional, psychedelic” outro. “Creating music is always a journey. Writing this album, I went through a spiritual awakening. Before that, I was quite confused about my emotions. I wasn’t in control. But as you grow older, you learn to [understand yourself] rather than [sinking into] self pity. I believe that I was a villain – I still am sometimes, we all have those two sides – but I’m also a hero in terms of bringing the message out there. When you suffer for your art, you lay your heart open. There’re hopefully two ups for every one down!”

If that all feels a little philosophical, Mimi promises that her upcoming UK tour dates – beginning with an appearance at London’s Old Blue Last on March 31 and continuing with an 11-date run supporting Saint Agnes – will be unapologetically 100 per cent high-octane. “I’m going to bring a full-on metal show,” she grins, bluntly. “I’m performing with my drummer and my guitarist. It’s going to be fucking loud, and it’s always going to end up in the mosh-pit.”

So, with the road calling, do these sounds make as much sense even were it removed from the big city?

“Trap metal is universal. It’s a state of mind: music written from the perspective of an outlaw – an [outsider] in society – and you can get that anywhere. We’re all alone anyway. [I don’t get the chance to] hang out [with the people in the city]. I’m constantly working. And the music that I make is the result of my thoughts. So it doesn’t really matter where I am. I just take my brain with me!”

Safe to say, regardless of where Mimi finds herself further down the line, London’s dark edges will always have a special place in her heart. And with UK contemporaries like Scarlxrd, BVDLVD and ghostofblu ensuring the city remains a focal-point for trap metal on a global level, there’ll always be a place for her in this great Big Smoke.

Before she goes, we wonder if Mimi might give us the inside track on the hotspots where she – or one of those other anti-heroes – and fellow underground enthusiasts might cross paths? She answers with a wry smile, half-German forthrightness, half-English reluctance to betray the secrecy that made the London scene so appealing in the first place.

“As I said, we’re all loners, so we don’t hang out much. If you see a steaming drain out on the street, lift the cover and jump inside!”

The Batman is released in cinemas on March 4 – book your tickets now.

Check out Mimi's curated Gotham After Dark playlist below.