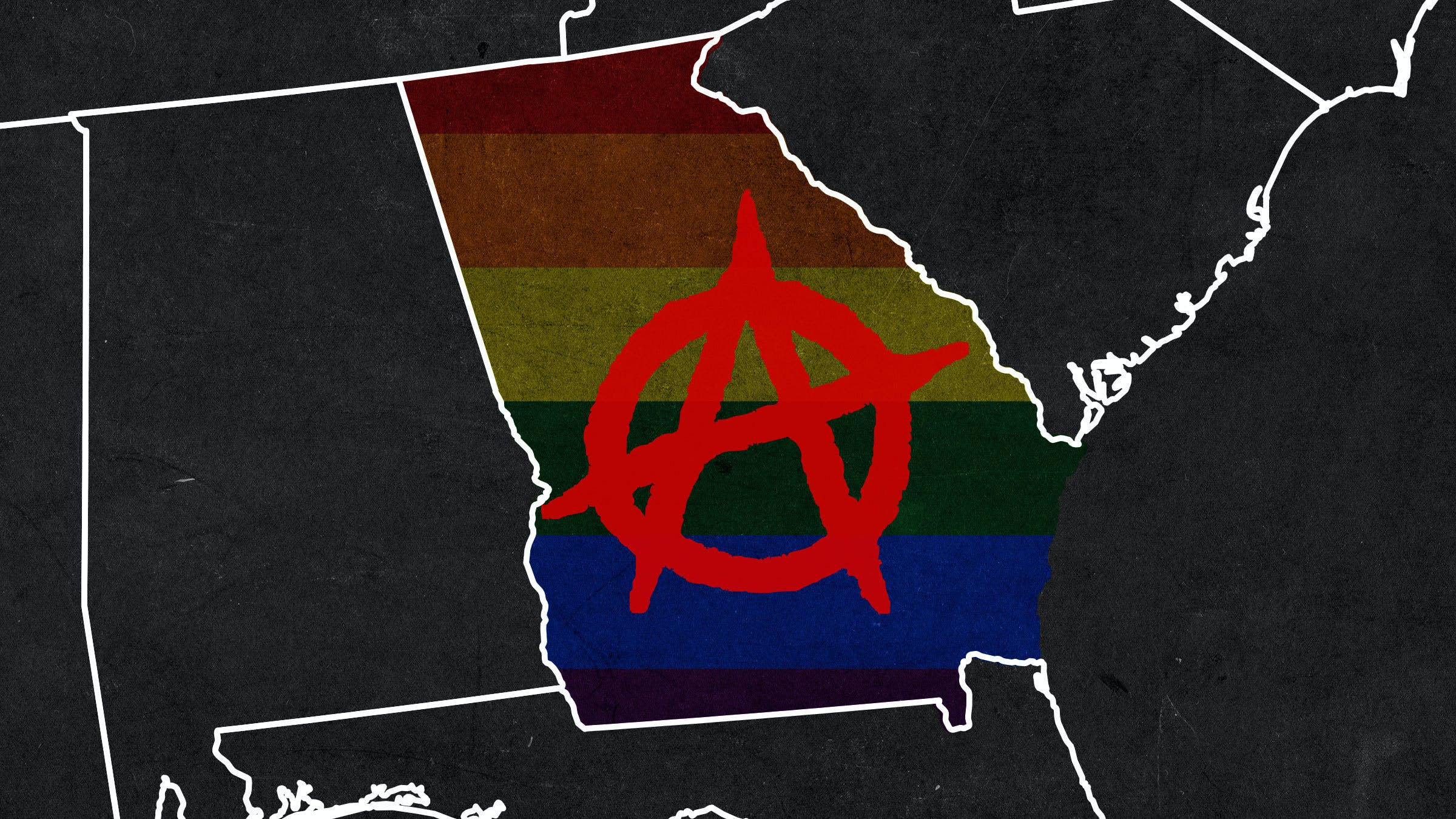 Considered by most to be rock and roll’s riotous, rebellious little brother, punk was founded on the idea of embracing differences, encouraging confrontation, and fighting (and shouting, and shoving, and kicking ass) for what you believe in. But for queer and non-binary punk musicians, the fight for acknowledgment and respect continues to be a difficult one. From the purposeful use of incorrect pronouns to direct physical assault, aggression against queer punks (and queer, non-binary people/POC in general) is constant and terrifying.

But head to one of the deepest parts of the traditional, conservative South -- Georgia -- and you’ll find a diverse scene of punks braving the most despicable of odds and building a platform for their voices through mutual respect and support. In the cities of Atlanta and Athens, the queer punk scenes are vibrant, energetic and intertwined in a way that keeps the culture’s early promise of understanding, support, and rebellion alive.

Yancey Ballard, a non-binary transmasculine queer-identifying person from Decatur and part of the electronic punk band Shouldies, found his identity in metropolitan Atlanta, one of the nation’s largest queer music scenes.

“Atlanta is an island on a very conservative state,” says Yancey. "It’s socially different than other cities because of its proximity to aggressive homophobia and transphobia. A lot of the time, it’s a fight to be heard because it’s not ‘as dangerous’ as it is outside [Atlanta’s perimeters]. People don’t care about microaggressions. People don’t care about discomfort. People care less than they should about full-on aggression because at least it’s ‘safer’ here. ‘At least it happens less’. 'It could be worse'.”

The “safer area” sentiment is shared by many, but Adria Stembridge, member of punk group Tears For The Dying and a transgender woman from Athens, experienced a different side of Georgia. Although the state is moving towards a more progressive, accepting outlook on all types of people, it’s taken a long time to get to that point. Adria recalls the ‘80s and ‘90s, where queer and trans folk grew up hurt and traumatized.

“A lot of us grew up in the closet and had literally no support or social networks to lean on,” says Adria. “Many of us grew up isolated, lonely, hurting and traumatized. It wasn't until the mid-‘90s that I discovered an entire community of people like me. But even that was relatively small, obscure and anonymous. My first experience with any real-life support didn't happen until the early 2000s. Now it’s a great time to be gay, though it’s just as dangerous as it’s ever been if you aren’t in an accepting area.”

Although Georgia has gotten increasingly more accepting over the past fifteen years, the reality of being a queer, non-binary musician in the South remains difficult and painful. Overcoming family-related traumas, self-censoring forms of expression, and generally hiding important aspects of their lives to avoid outside pressure are tribulations punks still deal with on a daily basis

Leora Hinkle, the bassist for riot punk group Nihilist Cheerleader, who identifies as a non-binary bisexual person, acknowledges their luck growing up in Athens, a really progressive blue pocket in a mostly red state. However, while love and acceptance exist in these areas, prejudice and hate towards anyone that identifies differently are also ever-present.

“I could never come out to my grandparents, or most of my family for that matter,” Leora says. “I often get told that my identity is less valid or ‘not real’...leading Nihilist Cheerleader to avoid putting the label ‘queer’ in front of the band, which may lead people to take [our] music less seriously.”

Similarly,Sebastian Marquez, the lead guitarist and singer of experimental punk band Dead Neighbors, edits his lyrics to avoid pressure. As the gay son of a first-generation Mexican immigrant, Marquez experiences internalized restraints that prevent him from fully vocalizing his lifestyle.

“I feel a lot of social pressure to present as straight or as masculine as possible,” Marquez explains. “There’s a stigma that I got at a young age against femme-acting folks who identify as male, especially in Mexico. As a band, on a surface level that translates into never going into the lyrics I write with regards to what (or who) I’m singing about, or for (read: sometimes boys).”

Each hardship within LGBTQ culture is experienced differently. Queer-identifying women and men in bands aren’t taken seriously, or are tokenized and put into a box of societal expectations. Transgender people are ignored, verbally (and physically) harassed, and repeatedly told their identity is invalid -- all while experiencing musical prejudices including being criticized for differences in “expected” vocal range and misidentification on show/festival materials.

Which raises an important question: with all these forces working against these musicians, how do they continue to thrive in the South, the traditional hotbed for prejudice and ignorance? Isabella Ballew, a gay punk from the hardcore group Tit, explains that the locale breeds something punk music has always required: a thick skin.

“Since I'm so used to feeling alienated I'm just louder about saying what I mean, and all the mean, homophobic shit just rolls off,” says Isabella. “Racism, homophobia, and transphobia are a daily part of life here. Living in it is great motivation to do something about it. What's important is direct community action. Music is an important avenue for social change, but it can't end there.”

That seems to be the underlying theme of the South's queer punk scene -- keep moving forward. At its heart, punk is progress, and while these musicians' surroundings may feel dangerous or hostile at times, they also provide a culture to react to. Trying to force change in a coastal bastion of liberal thought often seems like running in place, but to fight for freedom in a conservative hub is what punk is all about.

”Baby, I'm an anarchist,” says Isabella Ballew. “White people with dreads, yelling slurs is not punk. Punk is inclusion. Punk is not infringing on anyone's cultures. Punk is the right to exist and be who you are when the entire fucking world is telling you that you can't exist, and if you do, you shouldn't!”

“Being put into a box sucks,” says Yancey Ballard. “Representation is important. Punk is in the heart. Punk is whatever you need it to be. Doing what the fuck I want to do is my internalization of it. I hope that it can heal someone else as much as it healed me.”