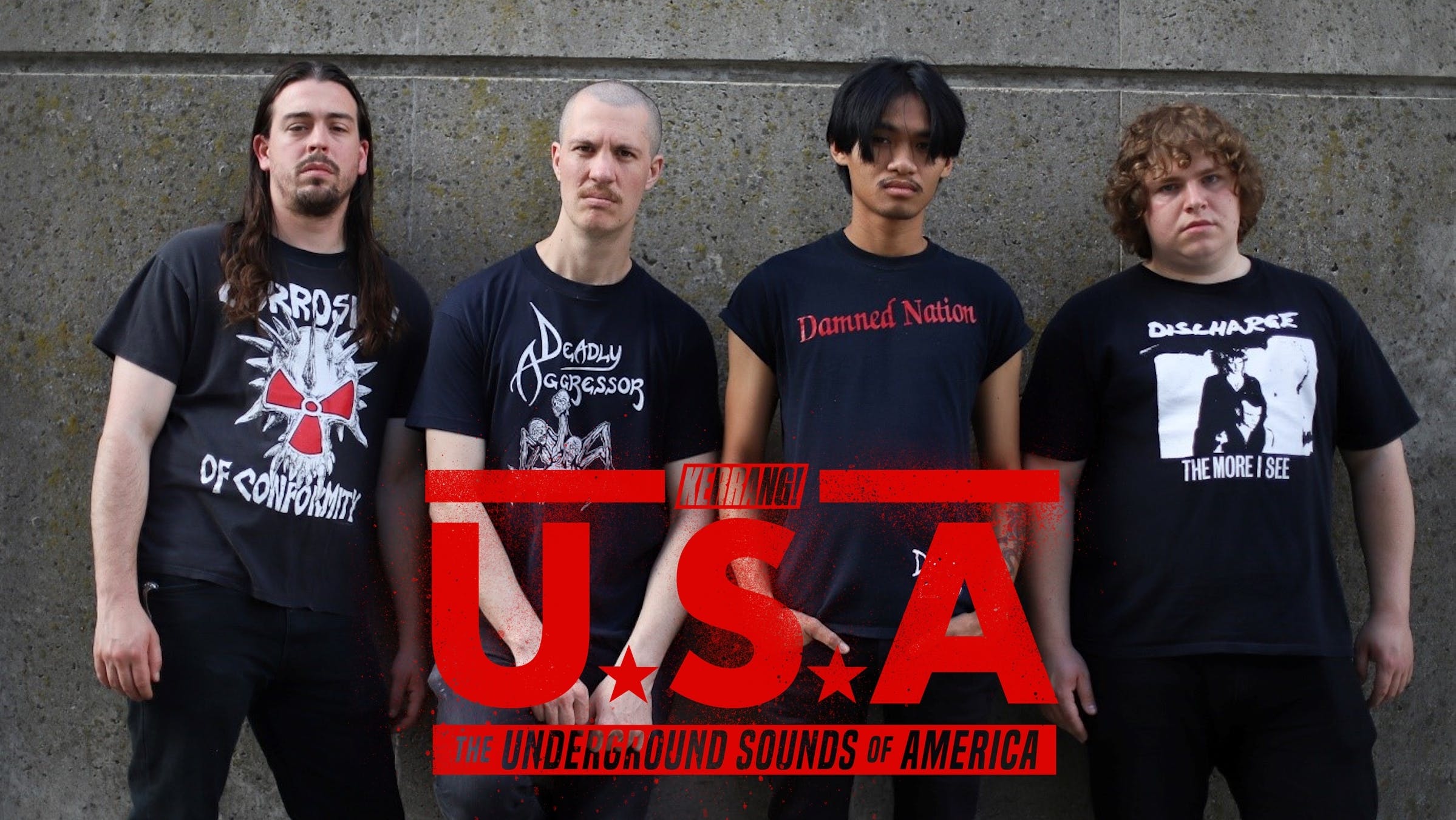 There’s plenty to Red Death to remind fans of thrash’s heyday. The Washington, D.C.-based quartet’s slamming riffs and howling solos certainly echo the vibe of those bands who combined speed metal and hardcore during the mid- to late-’80s; even their straightforward name and album art are reminiscent of an era in metal now lost. And yet there’s a freshness to their sound, an emphasis on song structure, guttural vocals, and even a tinge of prog here and there, that keeps them from coming off as a retro band. To vocalist Chad Troncale, the idea of being a throwback is ridiculous -- it’s just that the more things change, the more they stay hungry.

“I feel like our music isn’t retro by any means but I totally understand,” says Chad. “We are playing a style of music that was very popular in the 80’s but we are living in the now. Pretty much every style of music has already been done. Every human being is unique and interesting in their own right, for better or for worse but I think that music should always encompass that. It should be a perfect representation of YOU. Green Day isn’t the first band to play three chord punk rock but they have and absolutely do it in a way that only those three human beings could. Travis Scott does it with rap. The Rival Mob did it with hardcore. So on and so forth. So to answer the question simply: you just have to do it in a way that represents you!”

The band’s new album, Sickness Divine, certainly doesn’t pull any punches, and offers a vicious representation of the band. With churning guitars and Chad’s throaty bellows against moments of latter-day thrash’s more baroque melodies, the record stands above those records that seem to exist only to reference vintage cartoons and party culture. This hard-edged approach has landed Red Death respectable tour mates like Enforced...as well as some high-profile new fans.

“Ice-T checked the record out and I believe he’s a fan of the band,” declares Chad. “That is straight up exciting to me! I love Ice-T. Overall, the response has been positive across the board and that alone is very exciting to me!”

Limping from the pit with a split lip, we asked Red Death what drives their revel in violence.

1) In your opinion, who are Red Death's five biggest musical influences?

Huge influences since day one and still are now more than ever!

2) If you had to play one Red Death song for a newcomer to introduce them to the band, what would it be, and why?

I would play them a song off Sickness Divine. Probably the title track. It features a lot of patterns and styles we have on other songs but stands on its own. It has a music video to go along with it so it’s both a musical and visual representation of who we are and where our heads are at. Plus I think we look cool in the video, so I would love for that to be an entry point into our psyche.

3) Would you say that being from DC informs Red Death's sound, and if so, how?

Absolutely. The city is very encouraging of artistic freedom and being weird and outside of the box. The fact that we are a crossover band in a straight up hardcore punk scene says it all, at least to me it does. On paper, our style and sound is very alien to what’s come from the scene before. But in reality we fit like a perfect glove. I feel like we have a unique presence within the scene and that’s something that could only occur from being located in the district.

4) You have this huge tour coming up with Enforced -- what are you stoked for? Is there a specific town or state that you feel really gets you guys?

I’m honestly excited to hit some spots we have never hit before such as Boise, Cincinnati, Worcester, etc. as well as some favorite spots we haven’t hit in a while. We haven’t played LA since summer 2018. Very excited for that. It's been two years since we’ve played Montreal, we are also very excited for that. Overall though, I’m really stoked to see some friends I haven't seen in a minute and make some new ones as well. Also gotta shout out sharing a stage with Sheer Mag and Vio-lence in Dallas. It’s gonna rule!

5) What's one time everything went terribly wrong or miraculously right for you guys on the road?

Our 2018 tour with Power Trip. We played a horrendous show in Brooklyn which resulted in us sitting our former bassist down and cutting a man loose. He was over it and we weren’t. Felt like the lowest point in the band so far. We were playing a sold-out 800 capacity gig the next night. I had no choice but to give singing and playing bass simultaneously a whirl, and it was the last time I stepped on a stage and had a bit of worry in the back of my mind. Luckily, it went over better than we could imagine. All of our friends who were there loved it and couldn’t believe it. Now here we are! So both the low and high points came from the same 24 hour time period.

Red Death's Sickness Divine is out now on Century Media, and is available for purchase.

Catch the band on tour now with Enforced at one of the dates listed below: