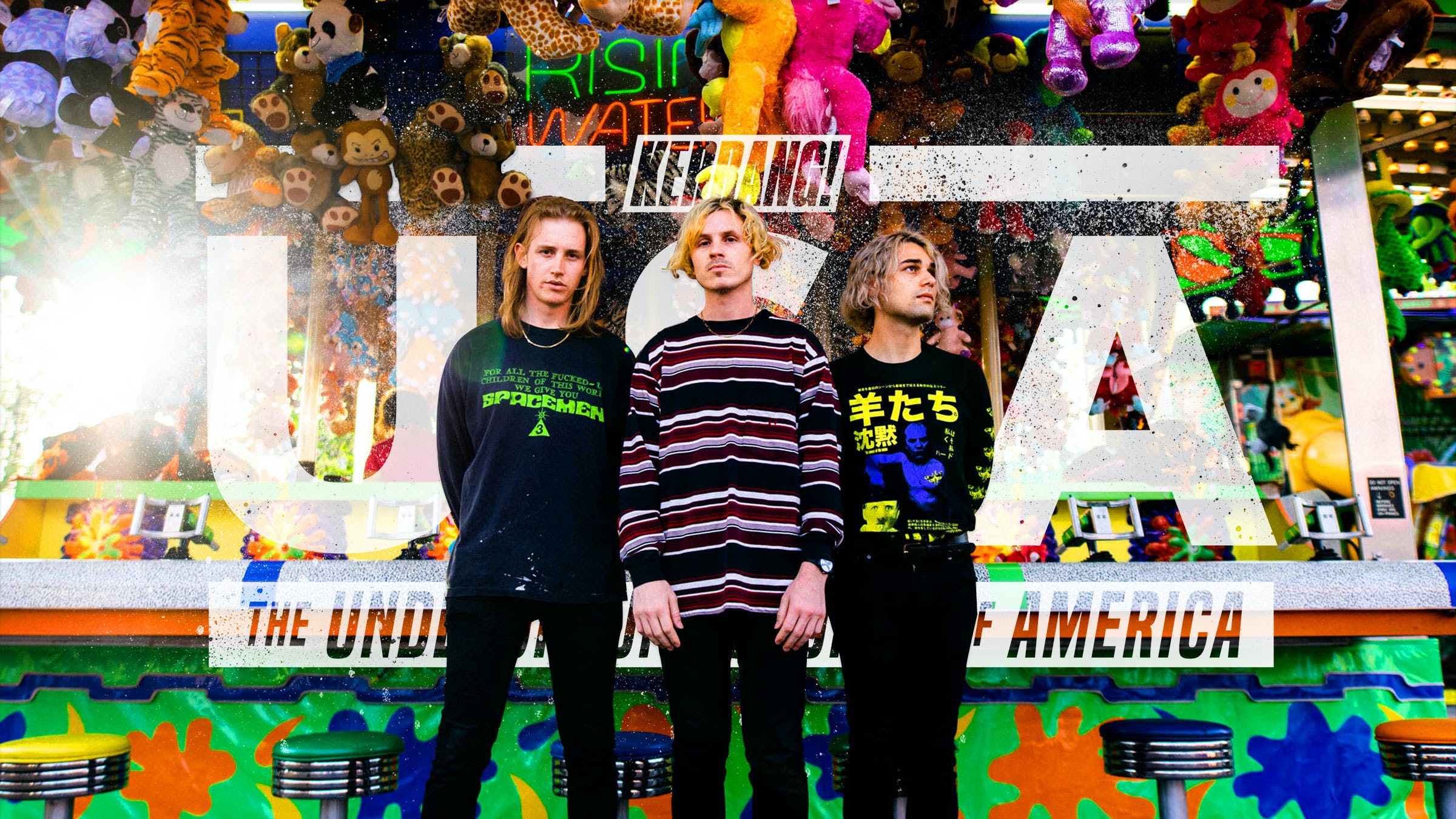 As Matty explains, “I moved from Washington D.C. because it was no longer the city I had fallen in love with. I watched that flourishing scene crumble into the abyss. On top of it all, there was absolutely no love for us in that city. When it came time to go, it was a tie between LA and New York.”

It was Los Angeles that won, and would consequently greatly shape the band’s sound: noisy, dreamy punk rock that blends the best of grunge and shoegaze, and -- like LA -- for all its romantic vibes, is not without a dark underbelly. Since relocating in 2011, Matty and Tennis System have released their debut full-length, Teenagers, followed it up with sophomore effort, Technicolour Blind, in 2014, and released the most excellent P A I N in 2018. Yet, while the band’s profile has grown steadily, Matty’s decision to move certainly came with sacrifice.

“My artistic life in D.C. and personal life were two separate things,” he says. “I had a great job, great friends, a sick house and my family was just down the street. I gave all of that up for years of struggle and depression in the ‘Sunshine State.’ Everything you hear about the people in LA is true. I used Tennis System as an outlet to express everything I was experiencing. Sometimes it’s tough to play those songs because it’s like peeling the Band-Aid off.”

Despite those personal setbacks -- or perhaps because of them – the inspiration has continued to flow, and does so in abandon on the band’s new record, Lovesick, due out this Friday, September 6 on Graveface Records. Produced by Jack Shirley -- who has worked with Deafheaven, Gouge Away and Oathbreaker, among others -- the album shimmers with a vibrancy that reflects the band’s spirited live performances.

“It was a goal of ours, in making this record, to capture the energy of our live show and not have anything on it that we couldn’t do live,” explains Matty. “No harmonies, no keyboards, no strings, nothing. We hate that so many artists today depend on all of these extra elements to beef up their songs and when you see them live, they sound nothing like they do on their record or it’s fucking karaoke -- one person dancing on stage singing to tracks being played on a fucking laptop. We went in and knocked this record out in five days. Five fucking days! We recorded straight to tape, doing each song in one or two takes.”

We spoke to Matty about the evolution of the band and what keeps him inspired.

1) If you had to play a newcomer one Tennis System song to introduce them to the band, what would it be?

I’d go with Turn. This is my favorite song off of Lovesick. Lyrically, what I’m saying is so relatable to so many people today - it’s about when the thing you love is more pain and trouble than it’s worth, and you’re just a shell, “going through the motions of emotion.” I fucking love Sam’s bass part during the bridge, the guitar bends and drums in the bridge, and then the end… The fucking outro kills me every time!! It’s like all this pent up energy finally releases.

2) Who would you say are Tennis System’s five biggest musical influences?

Top five, in no particular order, would have to be:

READ THIS: The Underground Sounds of America: HEALTH

3) Who would be on your dream tour?

My dream tour would be with Nirvana, Bad Brains and Kanye West – Yeezus era. I chose these three because their live performances are fucking epic and so inspirational to me. When I watch performances of Nirvana, people were so stoked to be at the shows. They actually cared about the music being played and the things Kurt had to say. Kanye, as off his rocker as he is today, during the Yeezus era was on some next level shit. The stage, the outfits, the fucking masks and the songs were so inspirational! To this day, that was one of the best concerts I’ve ever been to. Bad Brains was so infectious the entire crowd was going apeshit. HR captured that crowd and they were, literally, jumping off the walls.

4) How would you say you've musically grown since 2011's Teenagers?

Before I used to write a song in a day and when I was finished, that was it. I never left room for adjustments, improvement or adaptations. I would write a song, bring it to my band at the time and that was the song. Now, I take constructive criticism from my band mates and place major emphasis on the fact that this is our project and we write songs. If one of us has an idea, we build on it until we’ve created a song. The best possible song it can be. Everyone contributes. We try every possible idea until we’ve exhausted all options and create a sick song. The P A I N EP was the first Tennis System record that was written as a band, not just me bringing in a song I had written.

5) What are you most passionate about outside of music?

I love fashion. Since a kid, I’ve always loved clothing and the way it makes me feel. I recently began designing and creating pieces. I design all of our merch and we print our shirts as a band. I also dig for vintage and create merch for other bands. When we tour, we always have limited one of a kind pieces that I’ve found and printed on.

You can now pre-order Tennis System’s new album, Lovesick, due out this Friday, September 6.