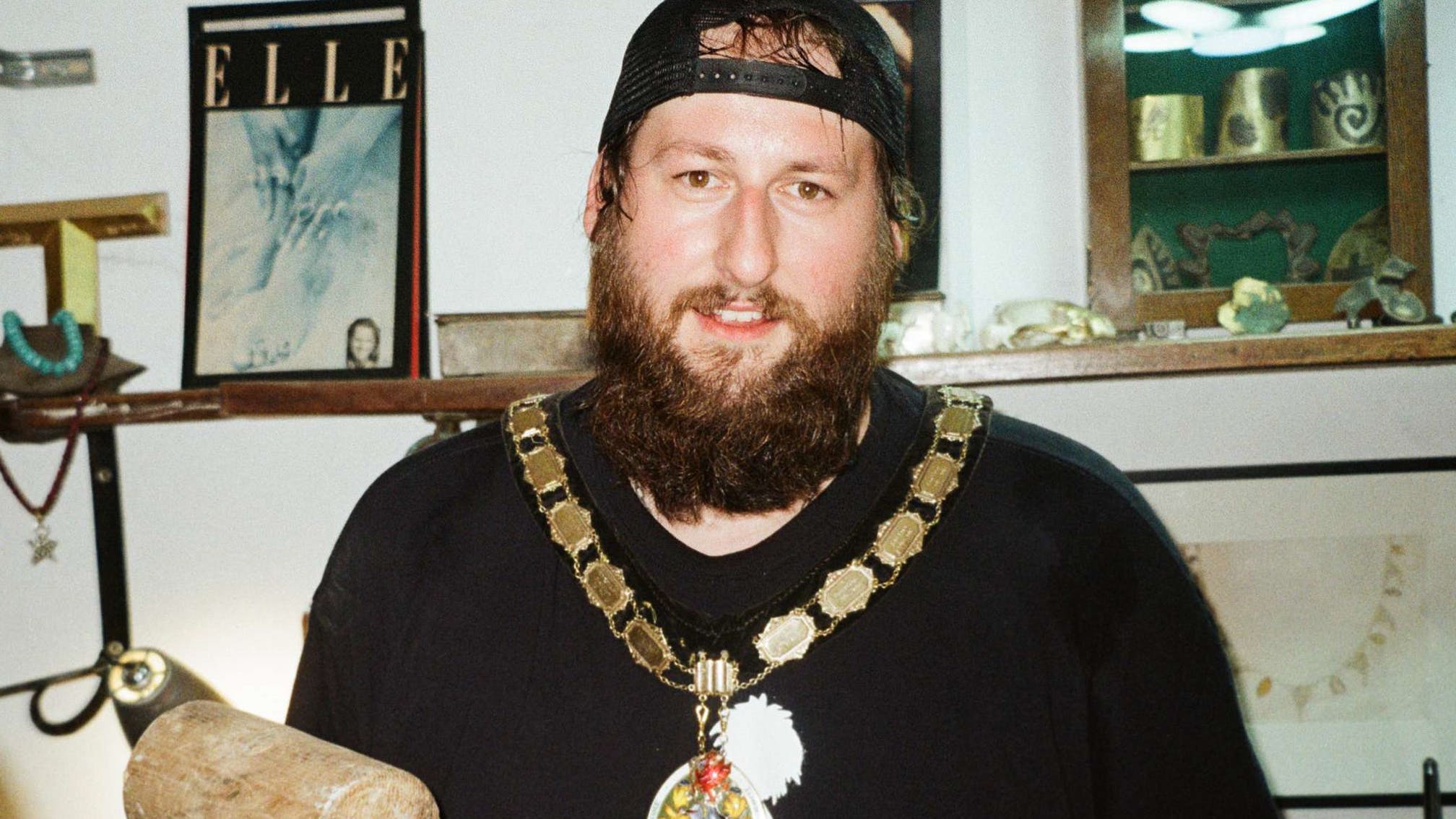 It’s a Friday lunchtime and we’re walking towards the Cheese & Grain in Frome, Somerset. Outside this much-loved 800-capacity venue – which has hosted bands such as The Damned, Supergrass and the Foo Fighters(!) – stands the man we’re here to meet. At six-foot nine-inches tall, wearing black wayfarers, a big beard and bigger smile, Andy Wrintmore is hard to miss. He finishes up his conversation with a passerby and welcomes us, quite literally, with open arms.

On May 20, Andy became the mayor of Frome, the market town he was born and raised in. The 28-year-old won a seat as an independent town councillor here by a landslide vote in 2019 – despite it having a population of over 26,000 people. When Anita Collier stepped down earlier this year, to his surprise, Andy was then unanimously voted in as mayor by his peers. Outside of his mayoral role, Andy plays drums in hardcore punk band SickOnes, hosts The Giant Pod podcast and works full-time at a Co-Op supermarket.

“I didn’t know what it entailed and I didn’t even really care at first,” Andy laughs. “I learned about local politics and how town councils work while I was campaigning to be a town councillor!”

Andy was voted in as a councillor alongside 16 other independents, thereby carrying on a town tradition – or “small-scale political revolution” – that began back in 2015. That year, the townspeople directly ousted party politics from their council as the Independents For Frome group (made up of locals that aren’t affiliated with any political parties) managed to win all the available seats.

“When I thought about getting involved with the town council I thought that I’d almost be selling out, or that I’d be becoming The Man, you know?” Andy begins, as we walk through the beautiful south-western town. “I would essentially be a politician, in a way, so I wasn’t sure if I’d be looked at with some scepticism from the punk scene, or if I’d lose my punk credentials. But then I learned that it was almost like a coup by some very smart and forward-thinking liberal members of the town. They formed this thing and kicked party politics out of Frome! I thought it was the most punk rock move you could make, politically.”

Andy adds that he sees what they do as almost “defending” the town: “I am putting my hat in the ring to keep a Labour, Conservative or a Lib Dem candidate out and keep it independent.” Citing the Frome author Peter Macfadyen as one of the “founding fathers of the independent movement”, he explains that Peter’s book Flatpack Democracy is the “bible for people wanting to take back their town councils from party politics”. The blurb reads: ‘How a group of local residents in Frome took control of their town council and set about making politics relevant, effective and fun.’

As we pass the shop where Andy works, he reveals that his job of stacking shelves was an integral part of the journey to becoming mayor. “I work in the town centre and I like to have a laugh with people and ask them about their lives and what they’re doing," he smiles. "I get curious and if I can have 10 conversations with people and make it last my whole shift then I will (laughs). I obviously don’t know all 26,000 people that live in Frome, but sometimes it does feel like that. I know most people from the shop and I used to call myself the ‘Mayor of Co-op’, just for a joke.” Andy didn’t realise that he’d been serving the actual mayor at the time for months and, when he caught wind of Andy’s joke, the mayor encouraged him to actually run for town councillor. “We all like it when someone sees potential in us. I saw it as an opportunity to grow.”

Strolling through town to get some lunch, every second person we walk past says hello, stops for a chat or waves through a shop window. A pensioner talks to Andy about classical music; a group of local hairdressers call him over to their lunch table; a teenager nods as he passes. “Alright, mayor!” shouts a voice in the distance.

This attention might be uncomfortable for some, but it doesn’t faze Andy one bit.

“When I was in school I was always the tallest," he explains. "You become very recognisable and people know you because you just tower above them. Then I got even bigger when I left school!”

Andy says that he doesn’t “act like a twat” in public and avoids getting into fights, but adds that that’s how he was before becoming mayor. “I realise there are more eyes on me now, but then again I’m not going to become a statesman, or something that I’m not," he stresses. "I’m the punk rock mayor, as everyone knows! I’m not a conventional mayor. People want me to be real, right? That’s the thing: realness. So I’m trying not to change too much. In most circumstances I just have to be me.”

After lunch, Andy takes Kerrang! to one of the oldest independent businesses in Frome: the Raves From The Grave record shop. Inside it’s a rock’n’roll emporium, stacked wall-to-wall with vinyl and CDs, complete with a local muso swapping Bruce Springsteen facts with the staff. “I think that being in the band and the stuff we’ve done allows me to keep my ego in check,” Andy muses, as we browse the new releases. “The hardcore punk scene isn’t about that typical big ego rock star stuff. Other young men might get into my position and get ahead of themselves. But because of the scene and the ethos, I don’t let this go to my head. I’m just grateful.”

He collects his pre-ordered CDs – KISS and My Bloody Valentine – and we continue our adventure.

Being a mayor here, Andy says, is more of a “ceremonial” and “moral leadership” role than dictating new policies and important decision-making. One idea he does have, though, is a Grateful Dead Day in the town, dedicated to the seminal ’60s rock band. He plans to take over Frome FM and play the band’s back catalogue for 24 hours. In the evening he hopes to have a big screen up in a park where they’ll show The Grateful Dead Movie. “The ’Dead were punk rock in their approach and their whole thing was around community in the sense of commune," Andy explains. "I think that’s something to celebrate after we got each other through the pandemic.”

After losing a close friend to suicide, Andy used his influence last year as deputy mayor to spread mental health awareness and support in a mayoral column he wrote. Now that he’s “taken the chains” and become mayor, he’s continuing this awareness work by releasing an LGBTQIA+ informational pamphlet on how to be an ally. He also cites consistency, commitment, empathy and compassion as what he’s hoping to bring to the role.

We head up the cobbled Catherine Hill in the town centre – a steep wynd full of quirky small businesses. Modern-day essentials such as skateboards, unusual houseplants, tattoos and vegan cakes are all on offer here. This street is what Andy describes as “new Frome”, in that it’s largely made up of, and catering for, the visitors and settlers from London and elsewhere. He goes on to to say that there are some tensions between the two worlds – based on gentrification and increases in house prices. Despite this, the newer people in the town have actually played a part in his journey to becoming mayor as much as the “old” Fromians he grew up around.

“Old Frome embraced me because I’m born and bred here,” he says. “They see me around the town, I’ve been in the Co-Op for years, I’m one of them, I talk like them, I drink in the quiet little pubs with them. [With] New Frome, they like the way I look and I kind of represent why they moved here. When I was doing the campaign I saw loads of people sharing stuff like, ‘This is why I moved to Frome, because it does things like this!’ I haven’t healed the divide or whatever, but I’m in an incredibly lucky position where politically both sides of the zeitgeist by-and-large accept me, support me and love that I’m the mayor.”

After popping into some of the independent shops to say hello, we head to the local jeweller to collect Andy’s bespoke mayoral sovereign ring. We arrive at the workshop and home of Tom McEwan, an award-winning goldsmith with bags of style and character. We’re welcomed open-heartedly and offered a beer. We talk about the town, the people and the circumstances in which a punk like Andy could become mayor.

As we edge towards the evening, we make our way towards the station to catch one of the few east-bound trains leaving tonight. Looking back over our day, we wonder how Andy manages to fit it all in alongside his band, podcast and full-time job. “If I have a day off I will fill it with something,” he says. “I can’t sit at home and waste the day because I have so much to do.”

He explains that being busy is good for him, as he has ADHD. “I never felt I’d fit into the 9-5. I don’t feel like other people and I don’t want a job where I need to concentrate for eight hours a day.” He goes on to say that in the coming weeks he’s looking forward to judging a local dog show and cutting a ribbon to open a new playground.

As K! board the train to leave, it strikes us that perhaps, in a place like Frome, it isn’t that weird to have a 20-something Grateful Dead superfan as mayor. Maybe more local communities should try some ‘flatpack democracy’ and take a chance on a punk rock mayor. After all, change has to start somewhere.

12 of the most uplifting songs about Satan

Bummed out by love songs? Need a pick-me-up from the ultimate evil? Here are 12 tracks about the Devil that are guaranteed to make you smile…