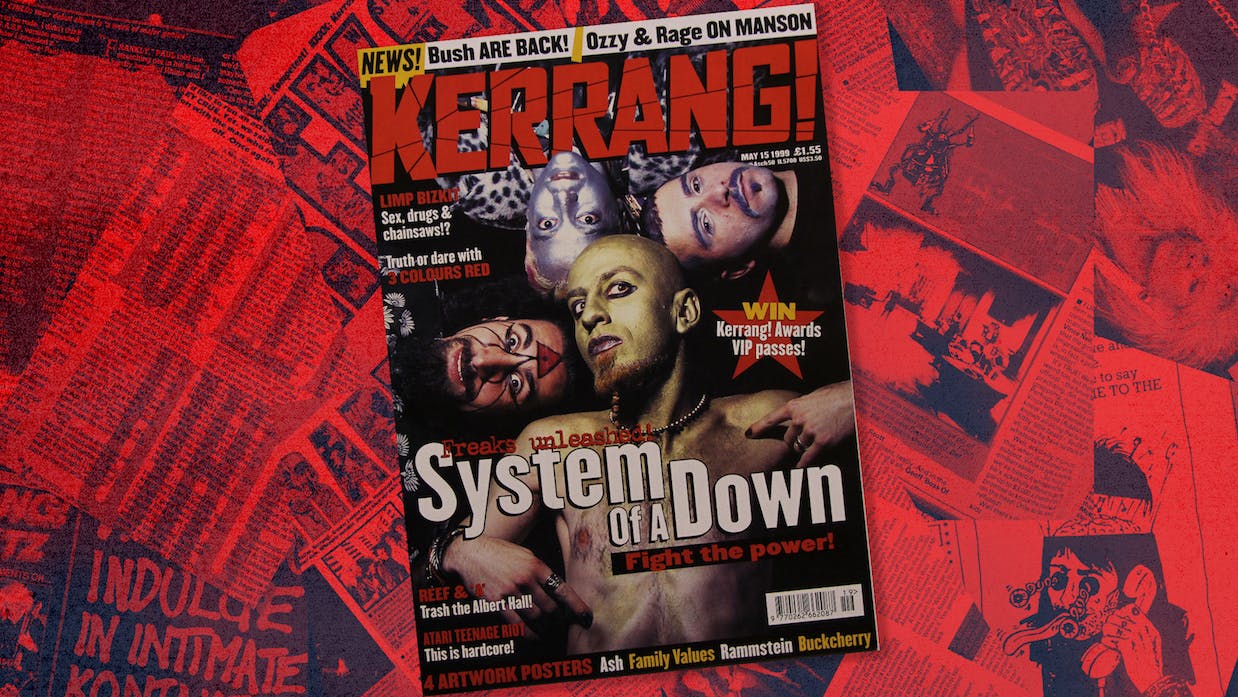 Remember wasssaaaap? 1999 sure does. Man, the world loved that shit back then. So much so, it even made its way into the Scream parody Scary Movie one year later. Anyway, we just thought we'd welcome you all to this week's edition of throwing it backkkkk!, in the style of the era in question.

'What was going on in the world in May 1999?' at least three of you might be wondering. Well, let us tell you. It seems that people all over the globe were bonking a hell of a lot more than ever, so much in fact that the world's population surpassed six billion for the first time. In the European Union (RIP sweet prince), there was weird new money to figure out thanks to the freshly introduced Euro currency and over on U.S. soil, President Bill Clinton officially did not have sexual relations with that woman.

The pages of Kerrang! magazine was where it was at, though, with this particular issue introducing the freak metal mentalism of System Of A Down to the wider rock world. We painted bassist Shavo Odadjian gold and guitarist Daron Malakian silver especially for it. We probably had reasons.

What else was going down in the world of rock and metal, though? Professional rockstar Tommy Lee (full name, Tomas Leetankengione) had run out on his duties as upside drummer in Mötley Crüe to concentrate on playing drums upside down in Methods Of Mayhem instead. Besides shooting home videos with his missus from off of the telly. At least that's what our mates with endless AOL internet trial CD-Roms told us…

Elsewhere in news, we had stars coming out in force in support of then much maligned 'shock rocker' (well, that's what everyone used to call him) Marilyn Manson. According to actual idiots, he should have been held responsible for the young men who shot their fellow classmates in the Columbine High School massacre, just because they happened to like his music. Official Good Guys Ozzy Osbourne and Rage Against The Machine's Tom Morello promptly "hit out" at the media and politicians throwing shit at Manson and rightly told them all to take their heads for a wobble.

The outrage in mainstream circles also sparked a response from the grassroots rock community, who wrote to us in droves defending Manson. Big ups to all you lot from back in them days. Rock music is great.

On a lighter note, in this live review caption we took the piss out of nasally singing lad Jason Perry, from Google-fearing Brit rockers A, just for the crime of wearing a sun visor during the band's gigs. He looked quite pre-emptively upset about it, too.

In other live reviews action, we went to see Ian Mackaye and the other chaps in Fugazi as they stared at the floor a lot in Leeds Metropolitain University, for which we awarded their performance a so-so 3Ks and labelled it a "frustrating" affair.

In the U.S. the alternative music scene was undergoing rapid change thanks to the downtuned sounds and expletive-ridden rapping of nu metal's hordes, and it was gradually making its impact and presence felt here in the UK too. So we grabbed a few moments of prime suspects Limp Bizkit's time, finding out what Fred Durst was like. "I'm a moron and I'm proud to be one" the frontman boasted, before claiming "Limp Bizkit's a big piece of shit" which pretty much kick-started a theme within his band that would continue for years in the press. In 1999, the Jacksonville gang were very much hot shit and very very much of their time. They even had a song called 9 Teen 90 Nine, that referenced 1999-kinds of things like G-Shock and WWE's tight knickers enthusiast, Ken Shamrock.

Speaking of things that were so 1999 it hurts, check out this SWAG we were giving away as competition prizes. Like, who wouldn't want an embalmed alien embryo in a jar?! And Sugar Ray CDs, clocks and mugs? Just imagine the dust these things are gathering in someone's attic or basement right now…

Back to features, though, where we caught up with New Jersey punks Bouncing Souls, fresh from releasing their now-classic Hopeless Romantic record. It was cool that we spent our time with them asking for their opinions on the popular TV sitcom Friends ("It's just skinny girls with big nipples") and getting them to dick around on space hoppers. Because bouncing, etc. Rad.

Letter Of The Week was sent in by K! reader Tim in Liverpool, who passionately claimed that Korn were killing metal and absolutely needed to be stopped in their tracks. Tim probably feels a little silly about all of that now we'd imagine. So let that be a lesson to all you aspirant keyboard warriors. In almost 20 years in the future, rock historians might just pull out one of your social meeja comments for pointing and laughing purposes, and then you'll be sorry.

The band A – as you have to always preface their ridiculous name – again here, had a new single out, entitled Old Folks. In the name of Serious Journalism we asked a rep from Age Concern for comment about its lyrics, 'The old folks are losers/They can't work computers / They die in December time', to which they quite rightly scolded us and responded that elderly people dying in winter time was no laughing matter and actually "quite a serious problem"…

We hope Jason Perry pulled his sun visor down over his eyes in shame when he read that.

It was nice that we treated it all with such dignified professionalism that we illustrated the panel with an appropriate photo of famously narked old boy, Victor Meldrew, who seemingly found it really hard to believe a lot of stuff.

Because we had that Limp Bizkit feature, we decided to have some fun with puns in this Top 10 list re: biscuits. Who doesn't love a good pun? Shoutout to whoever it was came up with Kick Out The Jammy Dodgers, MC5. And a big 'hmmm, must do better' to the person responsible for Malted Milk It, Nirvana. Sorry, but that one really was rubbish, K! person from the past.

We were asking some brilliant questions in this week's quiz. Highlights include, 'True or false: Queen Victoria's husband had a pierced penis?' and 'Which rockstar's name is an anagram of oral sex?'

Axl Rose, if you were wondering. And we'll refer to this on that other thing…

And so to our cover feature with System Of A Down. We nabbed the newest stars in metal in New York City for a natter, in which we spoke about gang culture, spirituality, politics and signing fans' tampons, as you do. The band also explained how they once met with Puff Daddy about potentially signing to his record label, but then Biggie Smalls died and it all came to naught in the end. Weird scenes, man. In a way, SOAD were the perfect soundtrack to such odd times.

And finally, for longtime fans of this feature (don't worry, we won't do that tired gag again this time), here is a photo of a bare bum. Because apparently we just loved showing you lot rockstars with their arses out. And apparently you really did lap it up. This time, it was the backside of Flea, in a preview for the following issue's cover feature on Red Hot Chili Peppers, who were, as always really, quite a big bloody deal.

More of this kind of thing soon, nostalgia fiends.