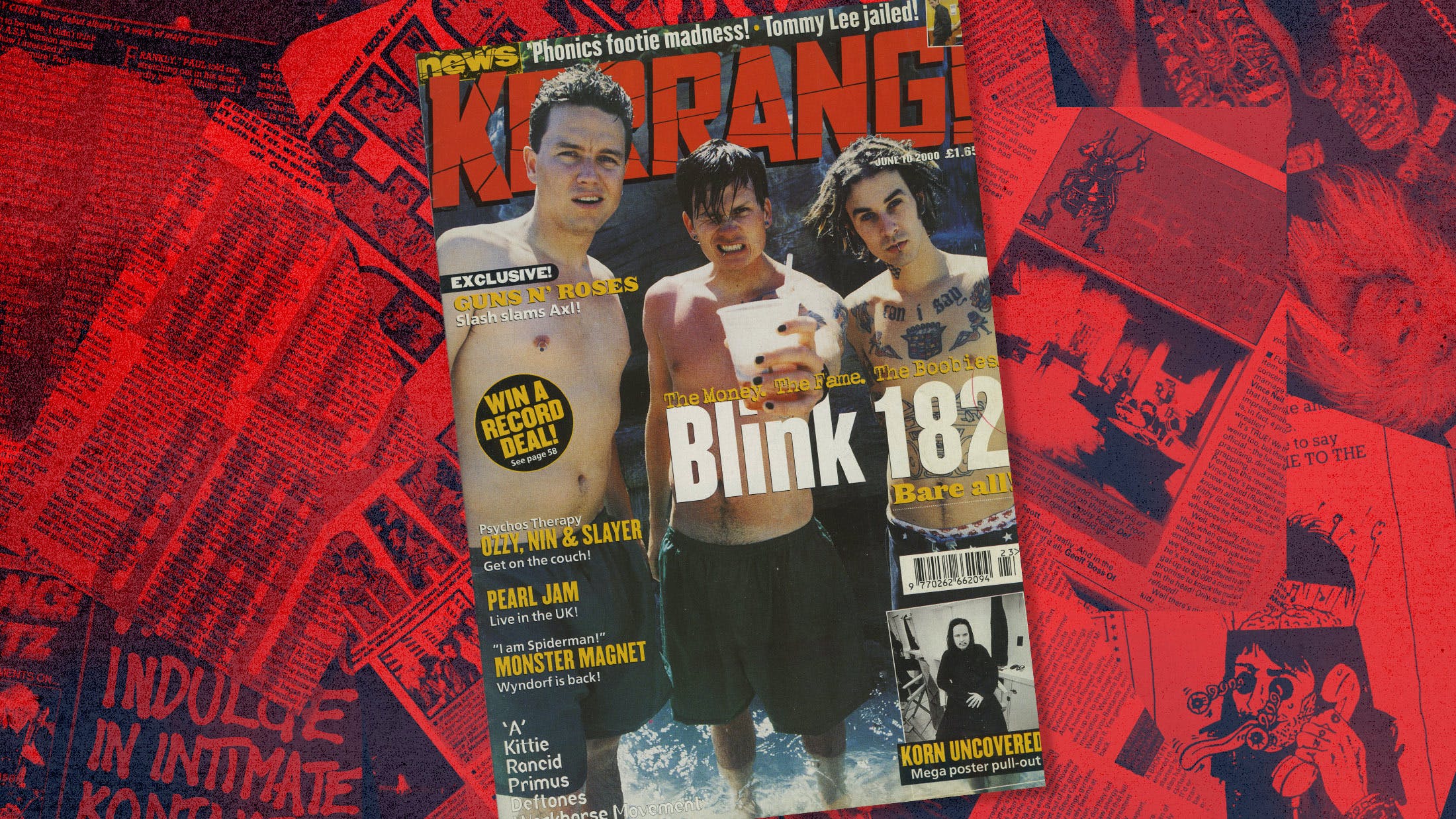 Welcome once more, whether you like it or not, to our deep dive into old school rock-centric gibberish, This Week In Kerrang! History! It's where we take a long hard look at ourselves and the world in general, and think about what we’ve done.

This week we're throwing it back to the year 2000, a time that once sounded like it was super futuristic, but looking back now it just sounds like it was 18 years ago.

This was the same year Angelina Jolie married Billy Bob Thornton, while her future husband Brad Pitt married Jennifer Aniston first. This was also the year that Pope John Paul II felt the need to give his blessing to Pokémon, DeviantART launched, Big Brother was aired on UK TV screens for the first time, and Ryan Sessegnon – professional footballer for Fulham FC and England – was just a month old by the time mid-June came around. Imagine being one month old. That's pretty young. Anyway, In summer 2017 Tottenham reportedly offered £25million for him to kick a ball around while wearing their white jersey instead of Fulham's, but the offer was promptly rejected.

Moving on from that utterly depressing bit of context, here’s to the June 10, 2000 issue of Kerrang!, where we were splashing around with pop-punk phenomenon blink-182, who were then known simply as Blink 182.

Incredibly, we were also giving away a covermount CD full of genuinely great bands and songs, for the meagre sum of £1.95. That probably wouldn’t even buy you one of Ryan Sessegnon’s eyelashes in today’s money. A scan of the tracklisting provides a real eye-opener: The Get Up Kids and The Exploited on the same album together? FINALLY!

We described it as “another priceless Kerrang! compilation – the kind that money can’t buy” but we’d mugged ourselves off there because to get hold of it you had to hand over £1.95 which we've already pointed out. Oh well.

Bad jokes aside, there are some banging songs on the CD and in the days of pre-streaming, probably introduced a hell of a lot of people to their first experience of many brilliant bands. So ultimately, what we're saying here is well done us, really.

In ‘news’, we were busy dicking around with a bunch of bands at the annual Soccer Six tournament, that year held at Chelsea FC’s Stamford Bridge, before it got all oily and plastic and awful. Iron Maiden’s Steve Harris, Sterophonics’ Kelly Jones, and Bush’s Gavin Rossdale, pitted their skills against the likes of Robbie Williams and TV presenting duo Ant & Dec, who we lovingly described as “squeaky Geordie funsters”…

We were reporting the retrospectively often forgotten news that metal master Ozzy Osbourne was to join hip-hop masters Wu-Tang Clan to collab on a song called For Heaven’s Sake, for the fantastically titled LOUD ROCKS compilation album later in the year. We suitably captioned the photo of Ozzy with the pithy one liner, ‘OZZY: “Word up, G!”’ and everyone involved no doubt went home feeling very pleased with themselves for a job well done that day.

In the GOB-O-METER we were taking the rise out of the silly things that rockstars were saying. It was a cheekier time, really.

This week we were doing a virtual snigger in the direction of the likes of Dave Wyndorf likening himself to Spiderman, Slash claiming that he’d never go back to GN’R for “any amount of money” and blink-182 chap Mark Hoppus promising K! writer Paul Brannigan that even the band’s penises were offensive.

There was also this top photo of Christina Aguilera being held up by the band Lit. Frontman A. Jay Popoff appeared to be about to lick her ankle. We’re not sure why, but that’s okay. Sometimes it’s best not to know everything. Enjoy the snap.

Next to that we badly Photoshopped (wait, did that even exist? Did we do it in Paint?) Axl Rose’s head onto the body of a musclebound chap doing weights. Again, no clue why. Probs best we move on, mind.

Here’s something that seems quite innocent now – putting rockstars’ names into a computer spellcheck for a panel.

In other easygoing entertainment this issue, we asked a bunch of rockstars to write us a note so we could see what their handwriting was like. There didn’t appear to be any precedent or purpose for this exercise other than just because. And yet we managed to get the likes of Slayer’s Tom Araya, Ozzy Osbourne, Trent Reznor and Dave Grohl. We also had Ed Kowalczyk from the band Live write, ‘I wanna dance with you’, so there was that.

It’s impressive how many legit stars we got to indulge us. The times they were simpler, friends. Simpler and indulgier.

In some actual journalism, we went along to see Pearl Jam play Wembley Arena and decided that their performance was worth the full 5K treatment, which we justified and backed up with the can’t-fuck-wit-it pull-quote, ‘Pearl Jam are having fun’. So there you have it.

We also caught Ozzy Osbourne playing with Primus at The Roxy in Los Angeles. Again, we deemed the show such a classic that all five of the Ks available were promptly dished out.

Deftones’ monolithic White Pony album was the lead album review that issue and no, we weren’t about to drop the ball and award it anything less than full marks. You could be forgiven for thinking our K key must have been glued down or something, but elsewhere in reviews Cro-Mags’ Hard Times In An Age Of Quarrel only got 2Ks, and a band called the Groovy Ghoulies were also given just 2Ks for their album Travels With My Amp. So it turns out we liked giving stuff a pasting back then just as much as giving credit where it was due.

We sat down and had a good old chinwag with legendary riff deity Slash, who as mentioned earlier nixed the then-rife rumours that Guns were considering getting back together. Not in this lifetime, seemed to be the overall theme of his response to that line of questioning…

We were giving away a pretty badass set of Korn posters, which comprised a series of outtakes and candids from the band’s recent video shoot for their next single, Somebody Someone.

In related ‘giving away’ content, here we have the SWAG page. This issue we had Family Values tour goodie bags up for grabs, a couple of Get Up Kids T-shirts and a set of wrestling action figures based on the likeness of U.S. punks Zeke. Their new album was called Dirty Sanchez. We’re not sure what the connection is, but we reckon it’s best you make it yourselves otherwise this could get dangerously close to poor taste at best, or imminently litigious at worst. See ya!

Well, not entirely because we have loads left to get through in this issue! Like laughing at the graphics on these two games we were reviewing. Ronaldo V-Football and WWF Smackdown. Absolute shit.

We were offering a band a chance to ‘win a record deal’ in conjunction with Dream Catcher Records. If your band won this competition, please get in touch. We’d love to know how that worked out, because this has the makings of a beautiful story.

And so to our cover story with cheeky pop-punk upstarts (well, then they were) blink-182. The lads were on a charm offensive, or maybe it was just the latter, so keen were they to say and do outrageous shit to make an impression on us.

“If we took ourselves seriously I feel like we’d be throwing away a great opportunity to act like idiots for a few more years,” Mark said.

Right, that’s enough for this week. Let’s see what we can dust off for our amusement next time… Until then, stay cheeky.