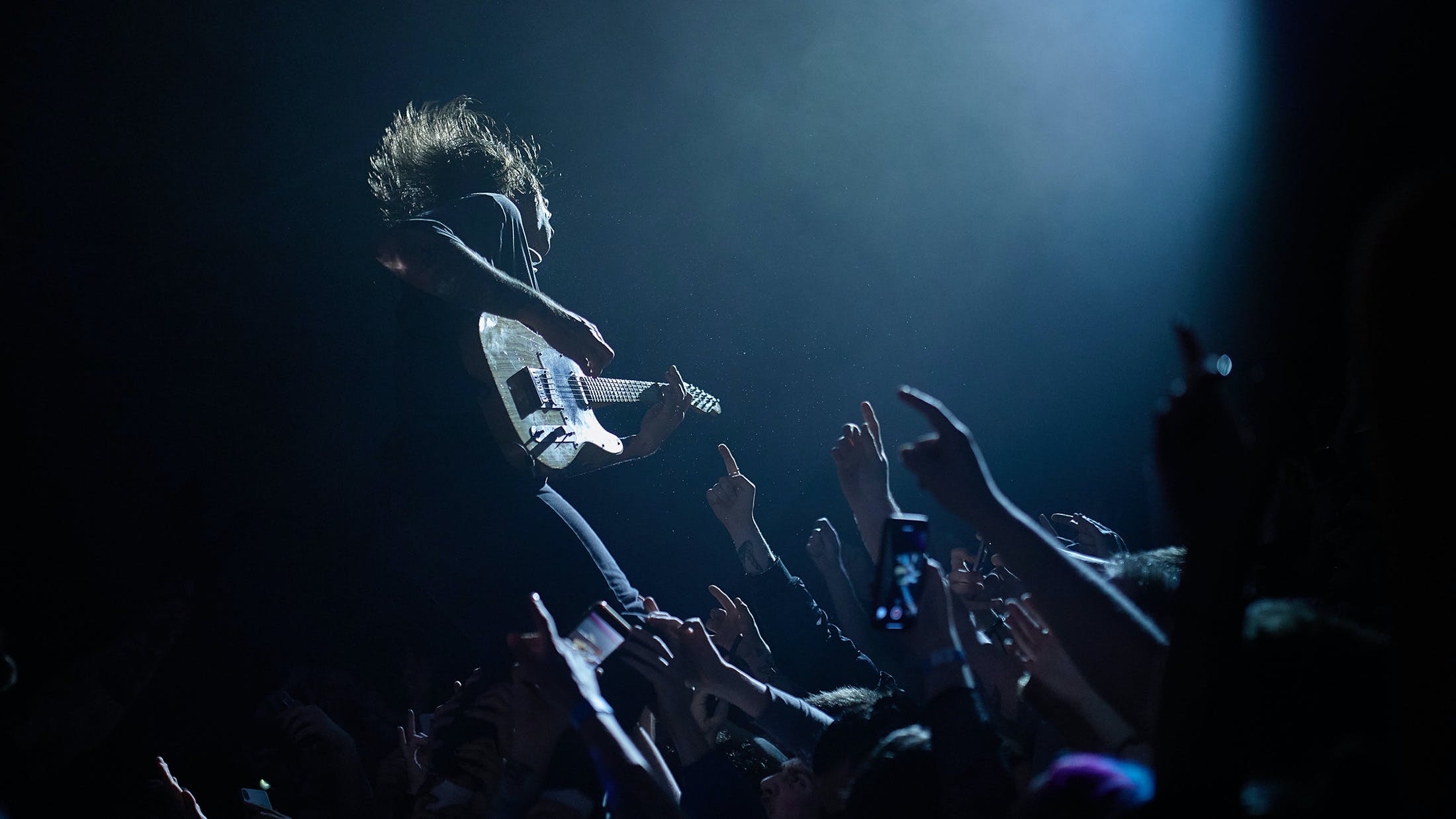 There’s a moment near the beginning of Sound Of Metal, the Oscar-nominated movie about a drummer who goes deaf, where Ruben (played by Riz Ahmed) is being diagnosed after experiencing bouts of sudden and overwhelming hearing loss. “Your hearing is deteriorating rapidly,” he is told. “You have to understand: your first responsibility is to preserve the hearing you have.”

Cut to Ruben being back onstage that night, pounding his way through a set by Blackgammon, the two-piece noisecore band of which he is half, along with his girlfriend Lou (played by Olivia Cooke).

Anyone who’s passionate about live music will recognise Ruben’s dilemma: if he stops attending gigs, a large part of how he lives his life will disappear. But if his hearing deteriorates any further, he stands to lose a lot more than music.

Riz Ahmed as Ruben in Sound Of Metal

“The movie terrified me,” admits Wade MacNeil, who’s spent two decades both listening to and playing loud music, most notably with Alexisonfire and Gallows. “Losing my hearing is my largest fear and there were a few things in Sound Of Metal that were really jarring – like when the lead character wakes up the morning after a gig and his hearing was hurting him. That was definitely a very familiar thing.”

When asked about the toll that a life of loud music has left on his hearing, Wade reels off other symptoms that may be familiar to music fans. “A lot of times after a gig I can hear the kick and snare drum, like ‘boom-bap-boom-bap-boom-bap’, when my head’s on the pillow in bed,” he says. “Onstage, there have been some issues, too: noises that have felt almost like a slap in the face.

“What really drew me into the film and what I found unsettling was when the tinnitus gets really bad at a show, [it] swells in and overtakes all the other noise. The sound design was done so well – during those parts I noticed I was breathing heavy.”

Tinnitus, or as most people know it, a high-pitched ringing you get in your ears, can be intermittent for some people, but for others it’s a chronic condition. It’s also irreversible.

“People say, ‘I came out of a gig and my ears were ringing’ without understanding that isn’t something to just joke about,” says Paul Checkley, clinical director at Harley Street Hearing, an audiological practice in London. “It means that potentially your hearing has been damaged irreversibly… There is no cure for tinnitus as such, which is one of the biggest issues that people face: you get this ringing in your ears and are then told that you’re going to have that for the rest of your life.”

“A lot of the damage to people’s hearing appears to be done by leisure activities,” explains Nic Wray of the British Tinnitus Association, who are being approached by more and more people asking for help. “If you go to a building site or a factory, everyone’s got ear protection, but there’s not as much awareness for people going to live events. Venue staff are protected by health and safety legislation, but the musicians aren’t covered onstage because they’re not employees and it’s the same for the audience.”

Because tinnitus has no cure, only treatment, both Paul and Nic recommend wearing earplugs. Harley Street Hearing fits both heavy gig-goers and musicians with custom-moulded, “flat response” plugs, while BTA’s Plug’em initiative contains a guide to the different types of ear protection available. BTA is also campaigning for venues to help and for the government to invest more in tinnitus research.

“We’re hoping that venues will provide more hearing protection, even if it’s just a basket of foam earplugs, which aren’t great but are better than nothing,” says Nic. “Some research does suggest that the number of young people with tinnitus is growing and will continue to grow.”

For those who already suffer from tinnitus and need help managing it, Paul explains that the hearing problem has “a psychological aspect and a physiological aspect”, and that more is known about the former. “What we do know is that there’s a link between the emotional part of our brain the perpetuation of the tinnitus, so the treatments are centred around rehabilitation and therapy,” he explains. “Things like cognitive behavioural therapy have a really good research base. Mindfulness or meditation is beginning to have an equally strong research base and works really well, too.”

“Quite often tinnitus leads to anxiety and depression,” adds Nic. “For others it’s about coping with changes in their concentration levels or the impact on their sleep. Techniques like meditation and sound therapy [using background sound to focus attention away from the tinnitus signal] can take a while to be effective, but what’s great about our support groups is that you meet people who are at all different stages at learning to deal with their tinnitus. Everybody helps one another.

“We wouldn’t want anyone to stop going to events,” she says, “we just want them to protect their hearing the same way they wear sunscreen when they go to the beach.”

“If you’ve got tinnitus, we would normally do a hearing test to allow us to assess it,” says Paul. “We have criteria that say we’ve got to send you to get a medical opinion if it’s particularly troublesome for you. In those cases, your GP is your best place to start.”

Regardless of the state of your own hearing, it’s clearly advisable to start wearing some form of protection in your ears when gigs start to return later this year, and to not be shy about getting your hearing tested if you think you need it.

“Over the years I’ve had my hearing checked,” says Wade, who wears earplugs when he watches live music, but not when he plays it. “It’s nothing too severe, but there is more deterioration in my right ear because of where I stand onstage and it being closer to the drum set.

“I guess playing the way that I do in the bands that I play in, it isn’t sustainable… I came out of the last Alexis tour hurting a little bit,” he admits. “That’s the last one I can do without taking this more seriously.”

If you’re worried about your hearing and tinnitus, visit the British Tinnitus Association.

Doritos, menthol cigarettes and the fall of free market capitalism: Life on the road with Alexisonfire