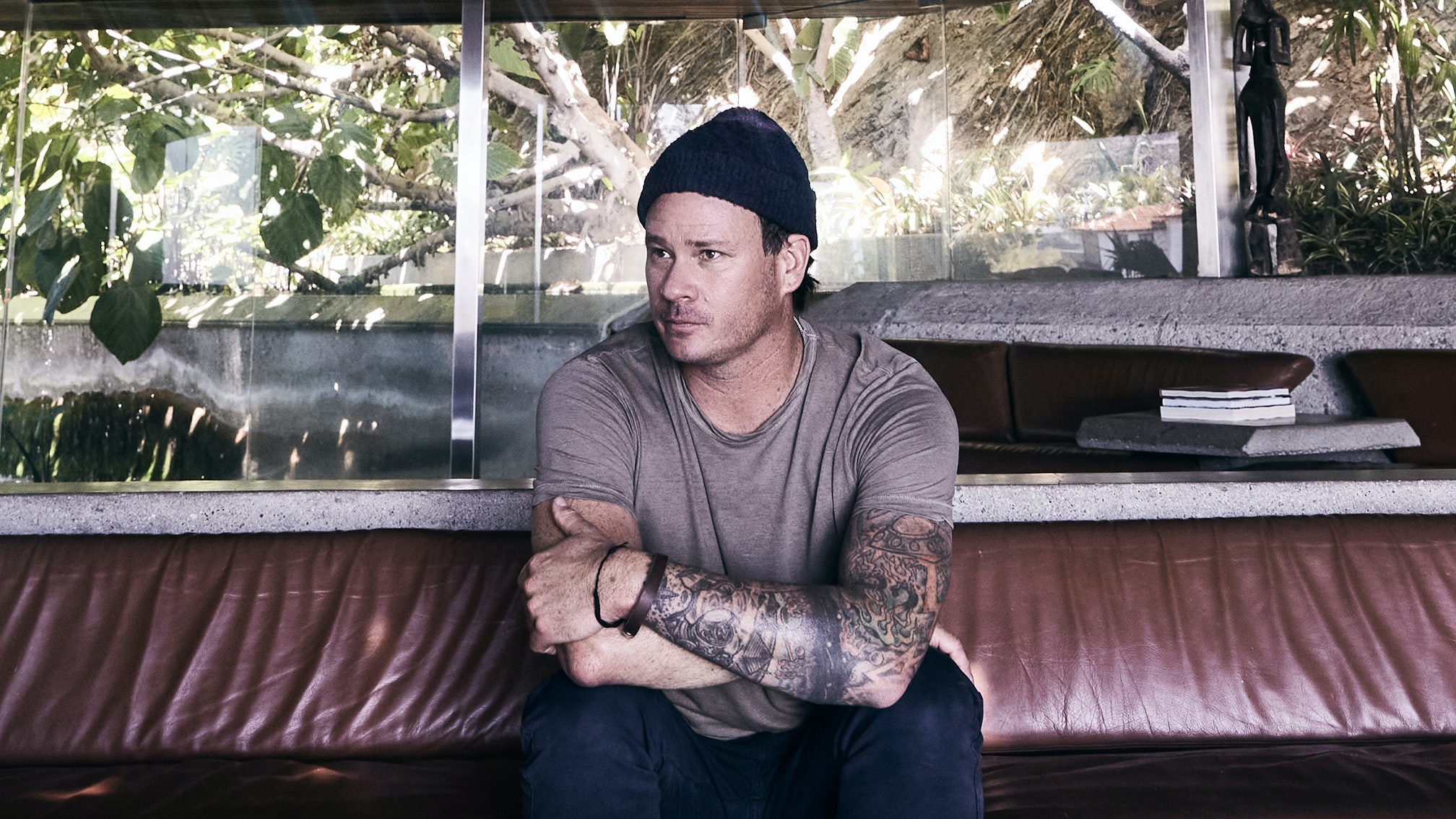 Tom DeLonge rocketed to fame in the late-’90s as the figurehead of seminal pop-punkers blink-182, reminding a generation that music doesn’t have to just be dour or aggressive; it can be about dicks and farts, too. Not content with one successful band, he’s spent the past decade and a half at the helm of Angels & Airwaves, adding a more complex and cosmic side to his creativity.

Here, Tom discusses the 10 songs that serve as signposts throughout his life and how he ended up where he is today…

Raw and rough as hell, Tom and bassist Mark Hoppus wrote this song the first time they ever met. Despite its terrible production, it remains one of the band’s most popular songs to this day.

“As young-sounding as this is, and as young as we were, I remember it really got me interested in a lot of what I do now with Angels & Airwaves: where there’s this long intro that builds, builds, builds and then takes off. And as a young musician who had never had a guitar lesson, it was a big deal to figure out how to do that.”

Taken from blink-182’s second album, written and sung by Mark, this was the band’s first hit single.

“My first really big ‘Aha!’ moment was when blink-182 wrote this. It was the first time I clued in on a proper pop kind of arrangement – it’s verse, verse, chorus, verse, chorus, bridge, chorus, and then all the little things you heard throughout the song we threw in at the end. And I was like, ‘Oh my god – that’s the perfect little pop-punk arrangement!’ It was really hard to stray from that afterwards.”

It might seem like just a silly pop-punk song, but there are apparently significant, mind-bending truths to this precursor to Tom’s role as a validated and respected ufologist.

“At this time, I’m getting really deep into UFOs and it’s even coming into my songwriting. I remember my bandmates and friends were like, ‘Stop talking about this stuff!’ so it’s funny how it comes full-circle where all this stuff is starting to come out and people are now celebrating the song like I’m a conspiracy prophet or something. I can’t really talk about it, but beyond the bits about me, there’s something very important in this song. If you find what it is, it will solve every problem in the world (laughs).”

For a band who built a huge reputation from being puerile, they sure can write some heavy-hitting songs. This is one of their best, and biggest.

“Working on Enema Of The State and this record with Jerry Finn really gave me an understanding of how to write songs that were in-your-face, but still produced really well. This was a big one because we were really starting to play with dynamics. I wanted something that was a bit more melancholy and quiet, and then you’d have these choruses where you’re screaming your head off. That really allowed us to start doing heavier songs down the line, which eventually led to Box Car Racer.”

This song repeats the seven dirty words listed in anti-establishment George Carlin’s 1972 TV monologue. Despite what Tom says, it was actually released as a promo single for Enema Of The State, and released on Fat Wreck’s 1999 comp Short Music For Short People.

“We’d had this giant record with Enema Of The State, and then we go to record its follow-up and the whole label is freaking out, because they’re scared about what we’re going to write. We had three songs for them to hear after six months to see where we’re at. It’s the head of the label and the head A&R guy, and we played them this song full of cuss words, a song that went, ‘When you fucked Hitler did he tell you that he loved you?’, which later became When You Fucked Grandpa, and cover of the Macarena that went, ‘Hey, wipe your anus.’ They literally thought that’s what we’d been doing for six months. It was ridiculous. But what I’m getting at is even when the stakes were really high and there’s a lot of pressure to follow up a really big record, doing those songs was the core of who we were – having fun, fucking with people and having a good time. And when that didn’t exist in blink was when it was really hard, because that’s the whole goal of that band.”

Melding blink’s pop-punk sensibilities with Tom’s hardcore influences, the Box Car Racer record introduced a new dimension of his songwriting. It confused a lot of blink fans, but it’s a stone-cold classic.

“This was another ‘Aha!’ moment. It had the dynamics of Stay Together For The Kids with the edge of all the punk stuff I grew up listening to. And it was more sophisticated in some ways – we weren’t just playing fast and getting the song over with. It really woke me up to what’s possible when I feel there isn’t any kind of expectation or chains on my songwriting.”

Who hasn’t sung Tom’s part on this song in an exaggerated, nasal accent? Even Tom himself got in on the joke…

“Every single track on this song was recorded analogue. There’s no electric instruments – it’s acoustic guitars, acoustic bass, a harmonium, I think – you pump with air like an organ. Jerry had all these really cool analogue instruments. Nothing on it was plugged in, and it became one of the biggest songs we wrote. We’d have never thought to do that – like, ‘Let’s stick with no electricity!’”

The lead single from the first Angels & Airwaves LP, this song perfectly demonstrates the heart – and the epic, anthemic choruses – at the core of the band.

“When we made the first Angels & Airwaves album, it felt like I’d arrived with this song. At least, I thought I had at the time. But I was really proud for discovering a version of myself I didn’t know was in there – it was like this third iteration of my songwriting started coming through, and it started me on a path where I got to be very hyper-self-aware. A lot of blink was about rebellion and fun, but I wasn’t going too deep on the heart all the time. With Angels, I really wanted to write from my perspective and be as truthful as I could be, but I was also trying to figure out who I was and how to do this new art form.”

“blink had just got back together and I had to go on tour with them, but I also had to finish this Angels record. I had one thing missing on it, which was a guitar solo on the last song. So I’m in there with my co-producer Critter [real name Jeff Newell]. He was an alcoholic, and this song was his favourite thing – the lyrics were about a woman who would do drugs to numb herself from the pain, and he was obviously numbing himself from the pain by drinking. So I’m on this blink tour, and he’s got to fly out to Florida and do this guitar solo. He comes to the studio and he’s drunk. He’s been drinking for days and he falls asleep on the sidewalk in front of it. I show up and he’s like, ‘I’m awake! Let’s do it!’ and we land the guitar solo, which is not something I do all the time. It’s by far not the hardest song we’ve done – we’ve crafted songs that are way more complex – but he kicks his chair back and goes, ‘Goddamn it! I could die right now!’ He was so content. So he said that shit and then he went home and he died like a week later. It was horrible. So this song was a big hallmark – it was the end of an era, the end of a beautiful friendship. He was my biggest supporter; he used to call me The Fearless Leader because I just didn’t give a fuck. I’d just do what I wanted and these fans are like, ‘What are you doing? Where’s the dick jokes? Play in blink!’”

The sixth Angels & Airwaves album sees the band continue to evolve and develop their sound, albeit with a few throwbacks to the past.

“LIFEFORMS is such a diverse record, but it’s really revisiting where I came from and completely modernising it. So it’s this really good blend of old and new, and I think that’s why it’s resonated so well with a lot of our fans. It’s nostalgic, but also doesn’t feel like it’s been done before, and that’s the perfect place for a song to live.”

LIFEFORMS is released on September 24 via Rise Records