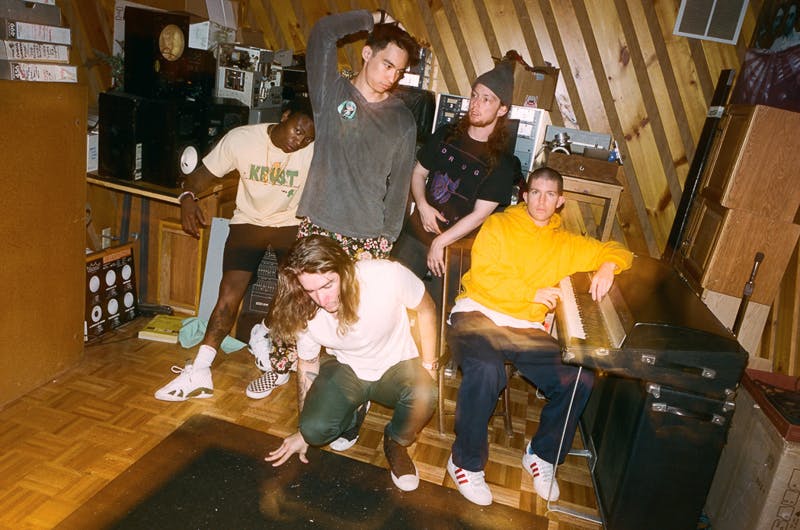 “Hardcore can be whatever anyone wants it to be,” smiles Turnstile frontman Brendan Yates; infectiously easygoing but smouldering with zealous intensity. “It’s about a sense of community where a show can happen anywhere there’s a room for people to come to. It’s about the collective diversity, where bands can express themselves in the ways that best resonate with them. It’s about finding common-ground that’s all connected, whether the bands involved are super melodic or super hard-hitting. Not defining what hardcore is can be what makes it most exciting…”

With the Maryland crew’s imminent second LP Time & Space promising to spin pits and scramble brains in equal measure, they’ll be shaping hardcore’s cutting-edge in 2018, whether intentionally or not. Where so many peers would be set on aggressively making their mark, though, their strikingly laissez-faire outlook is reflective of an outfit grown from the bedrock of friendship, good times, and following instinctual leads.

“It’s hard to know where to start,” Brendan ponders, genuinely struggling to unpick Turnstile’s narrative from the web of experience that was his musical coming-of-age. “Brady [Ebert, guitar] and I grew up on the same street together in Burtonsville, Maryland. I just remember seeing this super-small kid skating down my street wearing Rancid and Virus t-shirts, finding out he played guitar and thinking, ‘Wow!’”

Aged seven and 10 respectively, Brady and Brendan bonded over their prodigious desire for performance. Older siblings offered education in Nirvana, ‘90s alternative music and the rougher edges of mainstream rock. A chance mixtape gifted “from some girl in sixth or seventh grade” saw NYHC heavyweights Madball add a lesson in violence. “I didn’t know what I was listening to,” the singer laughs, “it just seemed crazy!”

Sandwiched between the legendary Baltimore (25 minutes north) and Washington D.C. (10 minutes south) scenes, the duo graduated quickly from garages to “Columbus Halls where a Christian hardcore band would open for a metalcore band followed by a punk band” to watching local heroes like Stout smash big city bunkers like Baltimore’s Sidebar.

“As a young kid, [going to shows like that] was a big change of vibe – basically the scariest thing you could see. People were beating each other up and jumping off the bar into this little space. It was the first time I felt intimidated at a show, but in a really cool, exciting way.”

Egged-on and unerringly supported by a growing gang of older peers (“Turning out and moshing no matter how hard our bands sucked…”), the duo were temporarily separated when Brendan followed friends Justice Tripp and Sam Trapkin into “two years of hard touring” on drums with Trapped Under Ice. But when Brady called with fresh ideas in 2010, there was no hesitation.

“We wrote the songs – which would become our first 7” – and put the band together with our best friends afterwards,” Brendan grins. “Sure, Daniel [Fang] was already an amazing drummer in a lot of bands (like Mindset) when he joined in. But Franz [Lyons] didn’t even play bass; he was just a friend who seemed to be with me every day of the year. When we asked if he was interested he got one and learned!”

“Turnstile was absolutely a project borne out of friendship and enjoyment,” Yates expands. “There was something that needed to be fulfilled in all of our lives, like, ‘I want to play with these people’ or ‘I want to perform this style of music’ or ‘I want to sing.’ Being so busy [with other projects] the first few years was a blessing – there wasn’t that pressure to play shows [or shift records]. We could just mess with rhythm and melody and every time we had the chance to get on, or throw a show it felt exciting to come together, chill, practice, maybe write a little. It’s never really seemed like a ‘side-project’, more like this other super-fun, natural thing.”

They’ve expressed themselves through refreshingly humanist gestures, too. A recent cut of merch sales, for instance, went to Palestinian refugee camps and Puerto Rican storm relief. One particularly impactful show in Berlin saw them stick the city’s Syrian refugees on guestlist. Brendan stops short of labelling Turnstile a political band, but admits, “Moments like those are the most rewarding. We had 30 or 40 refugee youth at the show, exposed to this whole other way of life, moshing and stagediving, having an incredible time. There was an enormous language-barrier that made communication afterwards almost impossible. But we’d already connected through the show.”

Their Roadrunner Records debut – the aforementioned Time & Space – Yates promises, is simply another extension of that same chill, self-determination. “I like the idea of giving a child a crayon and no instruction and seeing whatever flows naturally,” he says. “The concept of the record is about disconnecting from certain situations to see more clearly.”

Loading in the groovy, rhythm-driven NYHC sound of Maximum Penalty and Leeway alongside the gritty melodies of Minor Threat and Jane’s Addiction, then sprinkling on a little of the soulful strangeness of Prince and a plethora of even more esoteric influence, they’ve certainly disconnected from preconception; shredding the rulebook and pressing out the boundaries for “by far our broadest spectrum of songs to date.”

“I admire how much they care about what they’re creating,” Brendan ponders the point. “I relate to their desire to play bigger and smaller shows. Diversity is key.”

It’s clear however; they’re not quite bought-in on the Pittsburgh steelers’ unquenchable thirst for forward momentum.

“Where do I see myself in five years time?” A hesitance to surge away from the scene that’s shaped and galvanised Turnstile bleeds through. “There’s no way of knowing. If I look back at the past five, though, we’ve accomplished so much: making records, putting on shows, creating visual art, starting our own record label (Pop Wig). Down the road, I just want more of the same. I don’t feel a responsibility to carry a torch. We’re always just going to be the group of individuals that make up this band.

“I want us to have a platform to make music,” he finishes. “A platform to start other bands; a platform to put out other artists’ music; a platform to do whatever it feels like we need to do with wherever we’re at in life. We don’t want to take over the world. We just want to create an atmosphere of openness that prevents things becoming a routine. That’s something that I feel every human being should be doing, too…”

Album review: Turnover – Myself In The Way

Mellow emo-types Turnover relax even further on blissed-out fourth album, Myself In The Way.

Turnstile’s shows in Oakland and San Francisco with Snail Mail and JPEGMafia have been cancelled, but the band will announce rescheduled gigs “as soon as we can”.

Watch the TURNSTILE LOVE CHANNEL – which documents the band’s current U.S. tour – and marvel at just what a phenomenon their live shows have become.