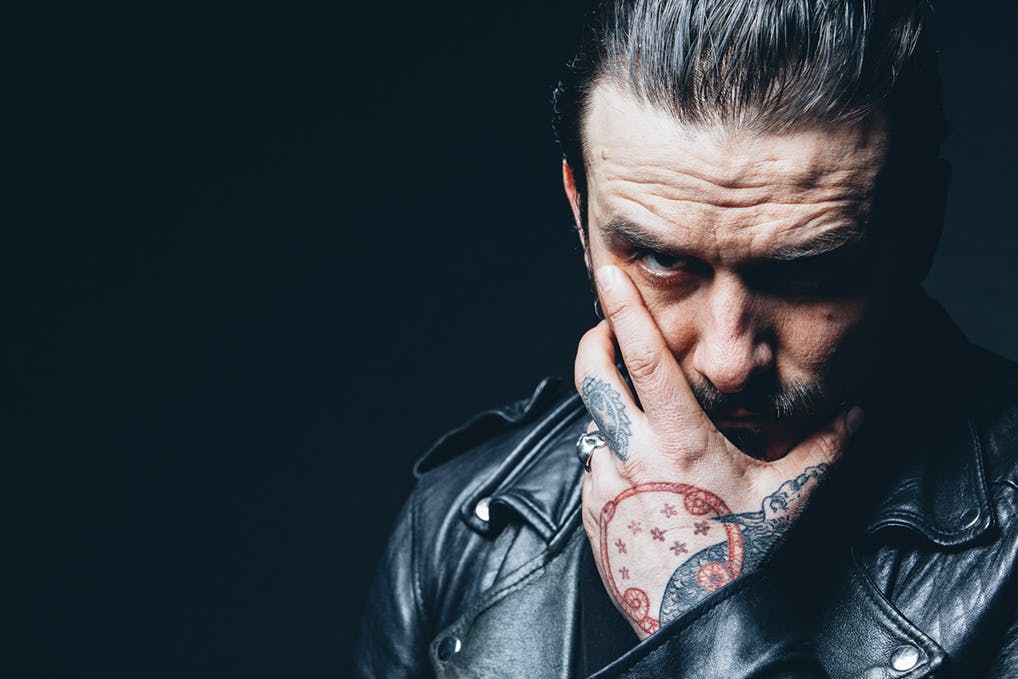 It’s a shame we’re not meeting Mat McNerney 24 hours earlier. On a cold Tuesday night, he sits opposite Kerrang! in a West London branch of Costa – anonymous among the urban sprawl in which hundreds of similarly faceless outlets sit – and notes what a strange evening he’s having, compared to what else he’s been up to.

“Just a few hours ago I was standing in a field, covered in blood, doing a ritual as part of the closing ceremony for the end of a studio session,” he says with a smile. “I woke up and thought, ‘Maybe I should make sure we cleaned that up, or the local farmer is going to walk by and call the police.’ Now we’re here in a café in London…”

For Mat, the café is the weird bit. As the main mind behind Grave Pleasures – as well as psych-folk outfit Hexvessel, with whom the blood ritual was performed – his musical output is that of a person who doesn’t quite fit in with the norm. Atop the post-punk riffs and dark, seedy goth atmospherics of the band’s latest album, the excellent Motherblood, Mat paints a lyrical picture of a supremely personal world: one of nuclear war, shagging, death, life, the occult, darkness, blinding light, seriousness and humour. All of it is drawn from a very real well of experience, of living a life of one’s own, rejecting and shedding certain aspects of 21st century existence, searching for true meaning. He sips his hot chocolate. “For me, it doesn’t seem like a bizarre way of living,” he chuckles. “It’s healthy for me in that sense.”

Mat’s journey to the dark side began as a teenager, when the world of the strict Catholic school he attended collided with the metal underground he was becoming increasingly drawn towards. Having discovered bands like Siouxsie And The Banshees and The Cure through his older sisters, the more extreme sounds of Slayer, Morbid Angel and Darkthrone followed. Though the school generally frowned on metal, there was also opportunity to play music.

“I was in a death metal band called Vomitorium, and we played at the youth club where they’d put bands on,” beams Mat. But despite the school’s tough rules and objection to metal, their show did not quite have the desired effect. “I remember one priest came and saw it and was like, ‘I really liked it!’ We had to have a band meeting because we were like, ‘The priest liked us. That’s not good!’”

If said priest liked the music, however, they definitely disapproved of some of the other subjects in which Mat and his friends were taking an interest. Having discovered Morbid Angel’s logo scrawled on one of their exercise books, they were called into a meeting by one priest who told them, “Boys, I’m worried about this.”

“It was all part of that stuff that wasn’t allowed, or you weren’t allowed to talk about,” Mat recalls. “Someone would have a copy of The Satanic Bible, and you’d have to stow it in your bag. I’d bring inverted crosses home and hide them in my room, but my mum would always find them and throw them away. So we’d have to hide them in bushes down the street so we could put them on before we’d go out.”

Eventually, Mat moved from London to Norway, first to Oslo, and then in the far North, Karasjok in Lapland, not far from the Finnish border. He began working with established Norwegian black metal bands like Dødheimsgard, as well as his own band, Code. But after he left the former and the latter were doing nothing, it was in Finland in 2010 that the seeds for Grave Pleasures were sown, albeit under a different name: Beastmilk. Once again, the occult raised its head.

“I met [guitarist] Johan Snell, who was a friend of my wife’s. We started talking about Finnish post-punk, and saying, ‘Oh, wouldn’t it be cool to mix this in with some of the black metal stuff we’ve been doing?’ I remember there were a lot of names around like BlackMilk, which was a clothing brand, but we got Beastmilk because we had been reading White Stains by [infamous occultist] Aleister Crowley. We were talking about this occult aspect of milk – everyone talks about blood, but milk is much more mysterious.

Sadly, Beastmilk was spilt not long after the band’s superb Climax debut, with Johan leaving, prompting the name change to Grave Pleasures. “It’s a name that’s supposed to be taken like, serious pleasures,” laughs Mat. The name and line-up may have changed, but the band’s – and Mat’s – spirit remained on the same path, continuing through 2015’s Dreamcrash album, and blossoming on last year’s Motherblood. “It’s a pure free-for-all, with no regulations,” he explains. “I really enjoy the idea that your backstage is its own country with no laws and no government. You can do what you want, say whatever you like and nobody is going to judge you. I like that aspect of things: embracing the chaos and letting it in.”

Mat admits that this lifestyle and being able to make a living off his various artistic endeavours is “a constant struggle”. But it is also highly liberating, and something that is fundamental to his life now, far beyond the limitations of being a rockstar.

“I think through the music I discovered a way of living spiritually that makes sense for me,” he explains. “I feel like it enriches my life, which is really, really important to me. Moving to Finland was the ultimate break to get rid of the past and start afresh. I realised that the occult isn’t this sort of dark, secret thing. There’s a lot to be learned from it that was hidden from me before, [as though I wasn’t] allowed to be interested in it because of my Christian upbringing. I think it’s really helped with the music as well, to be involved in that side of things and have it as part of my life.”

An example: the Hindu goddess Kali graces the sleeve of Motherblood. Not as a bit of weekend-hippie, went-to-India-once fluff, but as a symbol of everything Mat is talking about lyrically: devastation, life, death, the threat of extinction. And more besides.

“We have really upset the balance with what’s happening in the world, and especially with women and the role of women in the modern world,” he explains. “We’re having all these discussions about women and equality now, and I thought, ‘Well, yeah. We’ve upset the balance and we should venerate Kali more in the Western world.’ Kali is the ultimate goddess of life and death, and it’s through her you get your understanding of those two aspects, the balance."

And therein lies the fundament of Grave Pleasures’ expression. As Mat sings on Joy Through Death, ‘Death is the meaning of life.’ But that simply means that life should be lived in as joyous a manner as possible while you still can. Even the threat of nuclear war – a theme so prevalent in his songs – can provide an impetus for happiness.

“It was mind-blowing as a kid that we had to think about these things,” he says with a dark chuckle. “There was the nuclear standoff with Russia, and living in London, you were under threat from the IRA at all times. Now the danger has changed, but it’s the same kind of danger. And you live with that always – the thrill of death. It’s interesting that as a species we don’t really discuss it. We do the same thing that we do with sex: it’s all behind closed doors. So the idea with Grave Pleasures is to open this discussion up and say, ‘It is sexy, it is enjoyable and it’s a thrill. It’s there, it’s within us.’ If we really recognised how destructive we are as a species and celebrated it as part of ourselves, then maybe we wouldn’t be doing it.”

Mat and Grave Pleasures are a man and a band you could pore over at length. Because what he expresses is a life philosophy, and a death philosophy that everyone can identify with. And you may not wrap up the recording of an album covered in blood, or feel the need to move to Scandinavia to shed the skin of the past, but nobody can disagree with it: Have a good time, all of the time. You know who said that? Spinal Tap. And cracking a smile is just what Mat wants. “Laughing Abyss is a good song title about that, because no matter how deep the abyss is, there’s always some laughter there,” he says in closing. “And that’s really what’s there if you go down to the deepest abyss. That’s sort of the message: if you dig into the darkness, what you’re going to find is light."

Grave Pleasures are on tour in the UK supporting Converge at the following dates:

Motherblood is out now on Century Media. Check it out on the link below.

Joy Through Death With Grave Pleasures

A new Grave Pleasures single ahead of their new album, which comes out Friday.

The goth rockers are premiering their new video, Infatuation Overkill, exclusively with Kerrang!