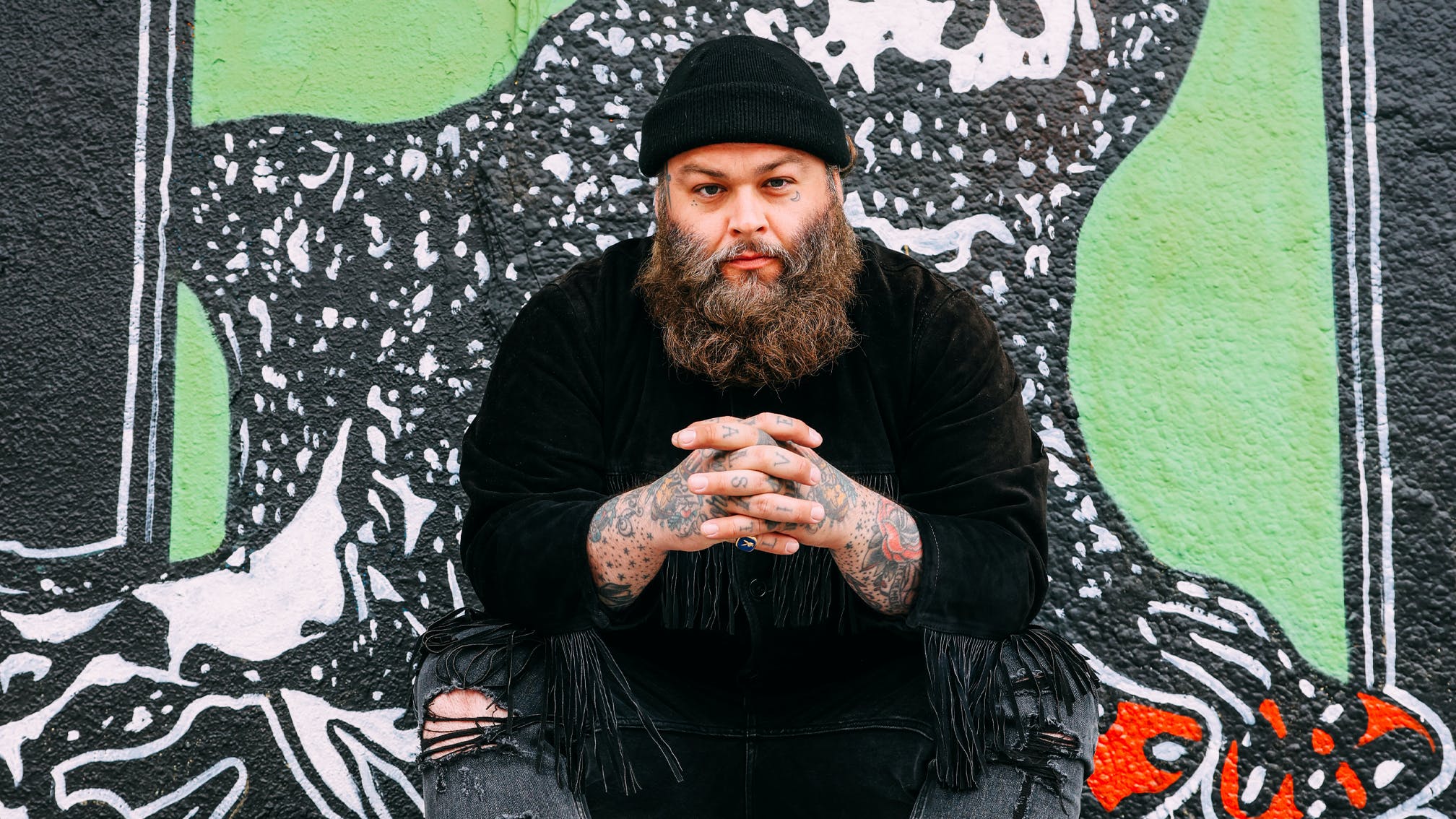 A full-time, professional musician from the day he graduated high school, Wade MacNeil is best-known as one-fifth of Canadian post-hardcore royalty Alexisonfire. After bursting out of their St Catharines, Ontario, hometown almost 20 years ago, a near-relentless schedule of touring and releasing albums followed until a break-up in 2012.

Alexis reunited in 2015, but not before Wade took the seemingly impossible job of replacing Frank Carter as frontman of Gallows, the most combustible British punk band in modern memory. When asked about that and his other musical ventures, he’ll quickly dismiss the idea that we live in a world where anybody has to be “one thing”.

True to his word, his latest album is a foray into psychedelic rock under the moniker of Dooms Children. It’s a solo record performed with friends, noted by its maker as being written half while he was struggling with addiction and half while he was undergoing treatment at a residential facility. The candid, confessional lyrics of tracks such as Psyche Hospital Blues help power an album that is the logical progression of a multi-faceted singer and songwriter coming to terms with his problems, but at the same time is completely unexpected.

More than a year into his newfound sobriety, Wade spoke to Kerrang! about the pressures and rewards of what’s brought him this far, and what he learned along the way…

You said that the first half of Dooms Children was written while you were struggling with addiction. Was there a specific moment when you decided to get help?
“I don’t know if there was a definitive moment that pushed me over the edge. There was a mounting, oppressive feeling that things were very chaotic and getting to a breaking point. At that time, everything in my life felt very desperate. Like, ‘If I can get through today,’ ‘If I can just do this,’ so that became something to hold on to: ‘If I can just get to treatment then I can see what happens.’”

Was treatment what you expected?
“I don’t know if I knew what to expect from it and I don’t think I could’ve expected any of the stuff that happened while I was there. Mostly, I just felt, for the first time in a very long time… safe. Safe to be myself and safe from myself.”

Who did you meet there?
“There’s every type of person in there. And there were some difficulties with people knowing who I am. People wanted to talk to me about the band and I wasn’t there to talk about that, so I spent a lot of time hanging out with a guy who was in the Hell’s Angels, because people wanted to talk to him about the club he didn’t want to talk about. Me and him talked about the shit that we’re all fucked up about: the pain and the trauma, the real stuff, and how it got to the point of numbing out so much to get through the day.”

How do you reflect now on the lifestyle that your career creates?
“I was always aware of it, but it’s a very bizarre way to exist. When you’re touring, there are the best days and the worst days, and right often they’re right up against each other. You play a show that’s a beautiful connection and celebration of life, then the next day someone passes away at home and you’re thinking about how you can get home to their funeral on time, who can fill in on guitar, or do you not go home? The thing that felt like the epitome of freedom the night before feels like something you’re trapped by 24 hours later.”

You were still in high school when you started Alexisonfire. Was there ever a point where you thought, ‘This is my life now’?
“We started touring non-stop after I graduated and played so much that there was never really any stepping back from it. Maybe I realised what was happening when I started feeling very disassociated from my friends at home. I’d be talking to someone about leaving tomorrow for Boston, then going to Australia and Japan, and they’d be looking at me like I was fucking crazy. You’re so focused on what’s in front of you. I wasn’t thinking about the fact I was going to Japan for the first time, I was thinking that tomorrow we had to drive nine hours to Boston!”

Were there any particularly tough times in Alexisonfire?
“We were very much good friends who started a band together. You’re gonna fight with your brothers, but at the core of it we were very close. [Vocalist/guitarist Dallas Green] left to pursue a solo project – every band is the same band, y’know (laughs)? He was leaving because of a musical decision, and musical decisions drove what we did in Alexis.”

Your next musical decision was to join Gallows…
“I talked to [Gallows guitarist] Steph Carter and I was on the plane a week later. Because of their plans, we recorded and toured right away. For me, for a time, it was difficult, closing that chapter with Alexis – and it was a difficult position to jump into with Gallows.

“Some people are very convinced that you need to be one thing. In the context of Alexisonfire, some people didn’t know that I was one of the main songwriters, that I put the band together, that I love punk music and that was part of what I wrote into that music. Also, because I don’t sing all the time, some people thought I wasn’t a singer. The other complaint I heard a lot when I joined Gallows was that I wasn’t British, and I can’t do anything about that! I tried to just do it and not feed into the circus. The shows stayed the same size and were fucking sick.”

Do you remember allegedly terrifying an unnamed pop-punk band backstage at the Warped Tour one year, after they criticised Gallows during their set?
“(Laughs) That sounds vaguely familiar, but not really. I had a lot of fun doing Gallows, because those guys were all fucking lunatics.”

Was there a pressure to perform live differently with Gallows?
“Yes. It was getting to the club, looking around the space and thinking, ‘Probably going to jump off that tonight, probably have to pull that down off the ceiling.’ Gallows were an intense live band and that’s what I loved about it.”

How has working under the pressure of touring for so long affected you?
“You develop an attitude of, ’We’re going to make everything work.’ If the gear got stolen, it was, ‘We’re going to get new gear tonight and play the show.’ If the van broke down, it was, ‘We’re gonna get to the venue and make it happen’ – and we really did. The first time Alexis played Barcelona, we showed up to the club, got off the bus and said, ‘It’s so good to be here! Where’s the trailer?!’ And somehow the bus driver didn’t notice it had fallen off! We got it back eventually, but had to use the opening band’s gear that night, so I played a sold-out show using a guitar with a strap so short the guitar was practically under my chin, and one pedal! All that stuff is a lesson in persevering and making things happen: we applied it to Alexis when we were 18 and I still apply it to every project I work on now.”

Has playing in bands that so many people love ever afforded you any special treatment?
“So many people who are in the food services industries are punks – and also crazier than most musicians! Alexis once had a huge, raw seafood tower waiting for us backstage at a festival and we’ve made it into a few fine dining establishments. The front of house manager for Noma, arguably the best restaurant in the world, told me that he crowdsurfed at the first Alexisonfire show in Australia, where the air conditioning unit got ripped out of the ceiling. It’s always funny to hear people in those restaurants asking, ‘How are they here, why are they dressed like that and why do they have the best table?!’”

You’ve written scores for movies and have friends and acquaintances in that world. How do actors compare to musicians?
"You see them act differently for different people in different situations, which is wild. There was an early 30 Seconds To Mars tour where they were opening for us and The Used. I’d see people come up to Jared Leto and he’d give them the Jared Leto they wanted, which made me wonder which Jared Leto I was getting. He was a nice guy to have a beer with, but he’d turn it on.”

Do you ever give different versions of yourself to fans of your different bands?
“I feel a certain pressure to have a moment with people and that moment can happen at some pretty inopportune times, but I feel lucky that I’ve made a connection with that person and always try to be cool about it. People wanting to take selfies in washrooms is a thing, though. You have go, ‘Let’s not do this – maybe later?’ (Laughs) Other times it can get heavy, if people found my songs at a difficult point in their life, but I’m trying to put myself out there to connect with people so I’m grateful we do have those moments.”

Do you feel like that and the struggles you’ve had over the past couple of years have given you any wisdom that you can pass on?
“(Long pause) I think a lot of people, myself included, have a tendency to run away from things that are difficult. We do a lot of things to distract ourselves from that, but the only way through it is to feel it… that’s the only way to come out the other side. That’s the biggest revelation I’ve had in the past couple of years, going through this time. Working through the songs on Dooms Children has helped me really understand a lot of what I was feeling. You can’t stuff it down or forget about it. You need to live with it – that’s the only way to move past it.”