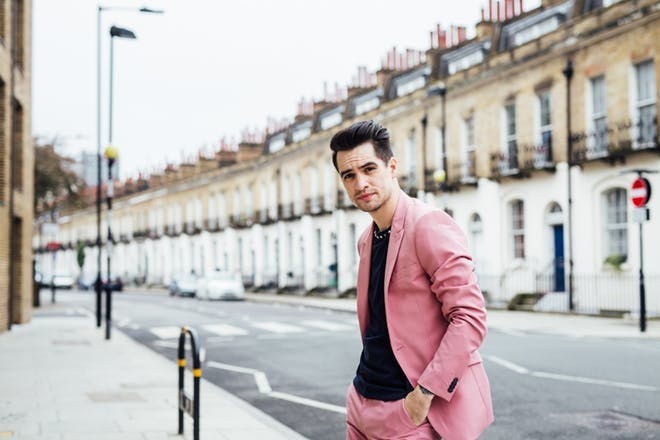 Between singing a song for Frozen 2 and opening a music studio for young people, Panic! At the Disco’s Brendon Urie is a busy guy – he also somehow finds time to hang out on popular gaming streaming platform Twitch. While he normally plays video games during his livestreams, he sometimes makes music, like that one time he made a metal track. But this week, he decided to branch away from heavier music and, for fun, created a 1980s synthwave song called 1980VRO, which you can listen to below.

Brendon used the livestream to show fans how a song is put together, walking his viewers through the different stages of building a track including pitching, speeding up songs, adding in and taking out instruments, and using samples. He started the song on Tuesday’s livestream, and finished it up on Wednesday.

Viewers can skip to (1:29:06) on Wednesday’s stream to hear him play an early version of the track and to (6:35:25) to hear the finished song in full, which has some fun synths and a killer guitar solo.

A fan has also uploaded a video of just the song to YouTube.

READ THIS: Brendon Urie: Rock must rip up the rulebook

“That was fun,” Brendon said on Tuesday. “Impromptu fucking synthwave song. Now I’m actually going to develop it. I love it. And we built it from scratch, dude. That was all from up here. We had a sound, and a synth.”

Here’s a video of Brendon recording vocals for the track, which he did by sneakily muting the livestream.

For some context, “vro” is a non-gender specific alternative to “bro” that has a couple of origin stories (including an XXXTentacion song), but became popular among Panic! At The Disco fans after the band’s photographer Jake Chamseddine (who also goes by Jake Chams) made a typo when trying to write “bros” in a tweet. Now, Brendon, Jake and some Panic! fans call themselves part of the “Vro Crew.”

“We did it my vros,” Brendon said, before playing an earlier version of the track. “New anthem. Put your damn hands up. New vronthem.”

As for when we’ll hear new Panic! At The Disco music, it’s unclear, but it shouldn’t be too far off. Last summer, Brendon said that he was already working on new material.

“I thought I would take a little more time off and I'm already starting music,” he said. “Not with anything planned in mind, but just working on some ideas. I can't help myself so I don't think it'll be too long before another Panic! record.”

READ THIS: A deep dive into Panic! At The Disco's video for I Write Sins, Not Tragedies

Brendon UriePanic! At The Disco